I was able to get a nice weeknight game in with my buddy @Sunchaser yesterday at Odyssey Games in Scottsdale, AZ.

I still am holding at about 1000 points, having failed to assemble my Chaos Warshrine this week while editing my tablerop RPG podcast, Full Metal RPG.

There were an odd number of players so @Sunchaser (Sylvaneth) got funneled into another 3 player battle royale with me (MoN Chaos) and Sam, (Duardin). We were battling for control of an artefact in the center of the board and both me and Sam elected to deploy a ways away from the Sylvaneth Hunters with their mighty bows to prevent casualties early on. This meant that I was starting with a bunch of Fyreslayers right in my backyard, uncomfortably close, with Sylvanth bearing down.

Taking a look at the board early on I did not see what I would call a clear path to victory, sandwiched between the two powerful and fighty Order forces. At this point the crummy make-up of my Nurgle list is beginning to bum me out and I'm not going to lie, I'm just not very good at the game. "But who is good after having played four times?" I ask myself.

Anyway. Sam and Rian are both really great guys and super fun to play with and we managed to keep things friendly and exciting through-out. As predicted the Fyreslayers and the Forces of Rot could only keep away from each other for so long. We managed a truce until the artefact was out of Sylvaneth hands and then it was game on in earnest!

The Fyreslayers made pretty short work of my force which I attribute to me making some pretty ****** tactical choices. My dice didn't help out, leaving my spell casters unable to hit the much needed 5s and 6s much less the equally untenable 7s necessary to make Nurgle magic pop. My list building skills ain't grand either which adds up to a trifecta.

Additionally, I'm still at the early stages in my AoS where I'm forgetting the details of my warscrolls more or less constantly and not making the best use of my army. Later I hid a sorcerer behind a tree (for the cover save) and then forgot that he was there. for at least one hero phase. Maybe even two.

Needless to say I was eliminated pretty early on and the game came down to Sam and Rian duking it out. A friendly and helpful neckbeard managed to find the time to stop by the table and narrate everything that we were doing wrong with the game which was grand, but even his best efforts could not reduce our good cheer. Despite the neckbeard's dire prognostications, the game was very close and I had to leave before the final tally revealed the victor.

@Sunchaser! Tell me in the comments! Who won??!!

1.) Below you can see the Chaos line spread precariously thin as I rushed forward in an attempt to secure the artefact from the hands of the grabby duardin. Sam of Odyssey games considers his next move. All of them good.

3.) The lone wizard, sole survivor of the warband, cowers in the trees waiting to thrust his arcane bolt at the last remaining general on the table, thus denying major victory to all. Wen his chance came, rolled a 3. Nice.

4.) Their tenuous alliance almost at it's end, the Path of Rot and Fyreslayers brace for the inevitable charge.

5.) New dice I bought for the game, seeing as how my putrid green Nurgle dice have been betraying me for weeks. Still can't roll for ******. Money wasted. 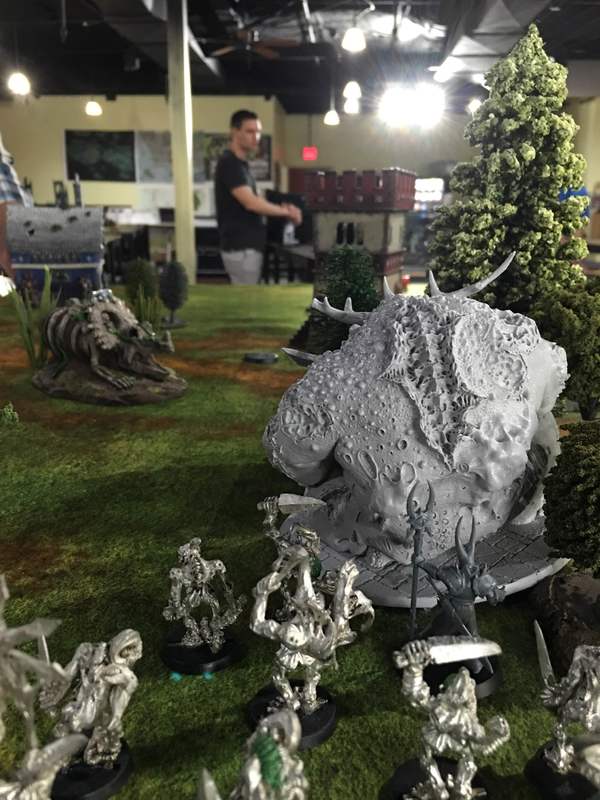 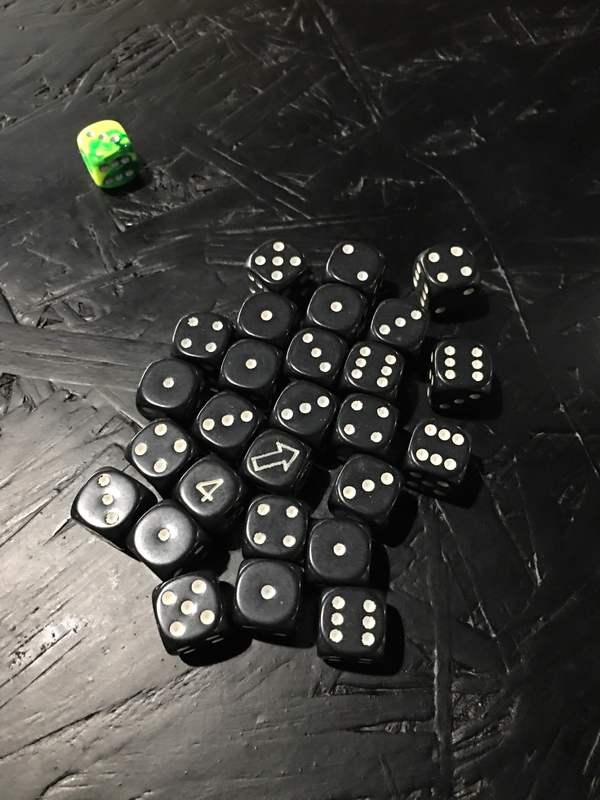