On Sunday I got together with my gaming buddies @Sunchaser and @Malicth at Odyssey Games in Scottsdale, AZ and we got in some games. Sunchaser was tired of beating up my Rotbringers so he split off and faced this dude George who was there and had some Stormcast Eternals. George hadn't played for a few months but was looking to get back in and had a very cool looking army that was coming right along in terms of painting.

I faced off against Casey, David (who wrecked my face previously with his Skaven) and Malicth. Casey and David both brought Undead lists and Malicth brought his Ironjaws. Casey and David and I were setting up a three player battle with the Fields of Blood Battleplan from The General's Handbook when Malicth arrived and we decided to make it a four player, all against all brawl. Casey felt like we should reduce the number of territories available on the board to four from 6 which I though deprived the game of some of it's tactical tooth, but no one else seemed to mind and it's all for the fun anyway so we deployed, essentially in a circle 12" from the center of the board.

I won't go through the nitty gritty of each pump and thrust but it was an amazing and super fun game! It seems like almost every time I get to play Age of Sigmar I have a better time than the last. I really didn't know that a fantasy game could be this fun. In all truth, I have yet to win a game, but I mostly play multiplayer games and there can only be one winner. I just feel happy to have discovered AoS while the game is in a period of optimistic growth and found a bunch of really cool guys to play it with!

Here are the highlights:

1.) Dave uses the initiative of round 1, turn 1 to charge Neferata into Malicth's Megaboss, who I should note was surrounded by almost 100 points of gibbering Ironjawz looking for a fight. Neferata destroys the Megaboss swiftly and Malicth's jaw just about hits the table. You can tell no one has done this to him ever before. The Ironjawz pile in and remove half of Neferata's wounds in retribution. As subsequent combat rounds unfold, Malicth is given initiative over Dave and the Ironjaws remove Neferata from the board. Can't tell if Dave was genuinely surprised by that or if he really was just going for the gonzo badassery of charging all those Orruks.

2.) The GA:D players fall into one another and attempt to wipe one another from the board. I strike an alliance of non aggression with the Ironjaws to allow us to position ourselves to engage the Death forces.

3.) Decided to leave my Great Unclean One at home this week and rolled those points into a Chaos Warshrine. MUCH better.

4.) My NoN Chaos Knights (Now being backed up by the benefits of a Chaos Warshrine AND me remembering to give them their re-rolls for Daemonic Power) begin to slowly chew through the forces of Death on their flank. By the time they collide with the Terrorgeist with Ghoul King it is almost out of wounds and they eat it's lunch. When Chaos Knights have their proper support, they are a lot better than their stat line with nothing.

5.) Feeling froggy because of how well my Chaos Knights are doing, I crash my Warshrine into the Vampire Lord generated by Neferata killing the Megaboss. The vampire only has two wounds left. I think to myself "Hey, this thing has a stat line, let's see what it can do!" Nothing as it turns out. I inflict no more wounds on the vampire which then chugs some blood or something, regrows 3 wounds and in two combat rounds shatters the Warshine in impotent rage, the only model from Dave's army left on the board.

6.) Orruks sweep in from behind, our alliance at an end. The Ironjaws make contact with the severely depleted forces of Chaos and Death, almost completely fresh. In the ensuring combat rounds, mow down Nurgle, Vampires and Ghouls alike as though they were a wheat thresher of men.

7.) Due to the large number of melees concentrated in the center of the board, The Lord of Plagues and his lame Nurgle's Rot ability ACTUALLY MANAGE to deal out some mortal wounds before succumbing to Orruk blades. The Lord of Plagues remains ******.

At that point the writing was on the wall and we were all super hungry. So we scooped up out models, congratulated Malicth and go the ****** out of there.

My next game is Thursday when I am going back up to Odyssey to support Casey's club. And then Friday I have a game scheduled with my old buddy Matt who I used to play 40k with a lifetime ago. Also at Odyssey. He plays Ironjaws so now I'll get to test my mettle against them one on one which I'm really looking forward to.

In hobby news: I'm trying to get my hands on a Harbinger of Decay to step up my Nurgle Mortals Save Game but they are temporarily out of stock on the GW page. So, I went ahead and picked up a Maggoth Lord on eBay for a screaming deal. We'll see if he get's here in time for Friday's game. He shipped today, so I doubt it, but it's not impossible! Pics below!

1.) The Path of Rot prepares to surge forward and despoil the Realm of Death with their withering claws.

2.) The Ironjawz Megaboss is undaunted by the presence of the infamous vampire lord Neferata on the field and strides out to meet her at the head of his warband.

3.) Neferata's Morghasts and zombies prepare to seize the field as Neferata licks her lips at the thought of putting the Megaboss under her boot as an undead vassal.

4.) From behind the walls of a ruined cathedral the Path of Rot cries out wretched prayers to Father Nurgle and prepares to take the Undead flank.

5.) Descending from the pitch black clouds that roil overhead, Neferata descends on the Megaboss and slays him before the he has the chance to retort.

6.) Despite having their numbers weakened by the Crypt Horrors before them, the Chaos Knights, invigorated by the power of a deamon flowing through their sword arms, claim many victories for Nurgle in the name of the Path of Rot.

7.) My WIP Chaos Warshrine made from a Skaven Plague Furnace with bitz taken from an actual Warshrine. More about that project another time, hopefully with better pictures. 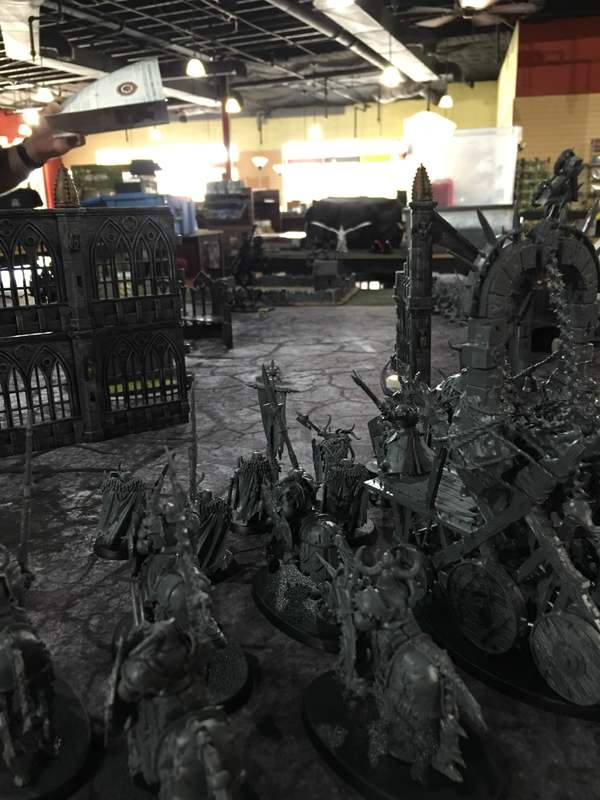 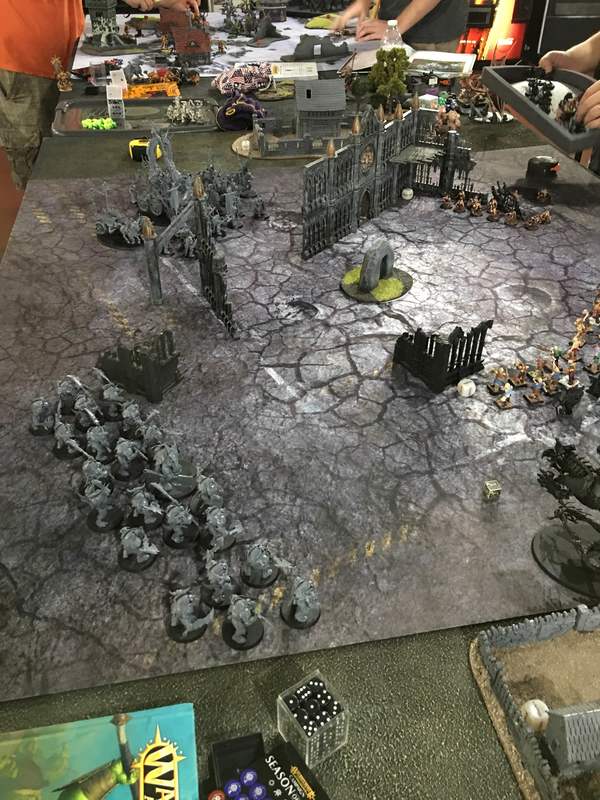 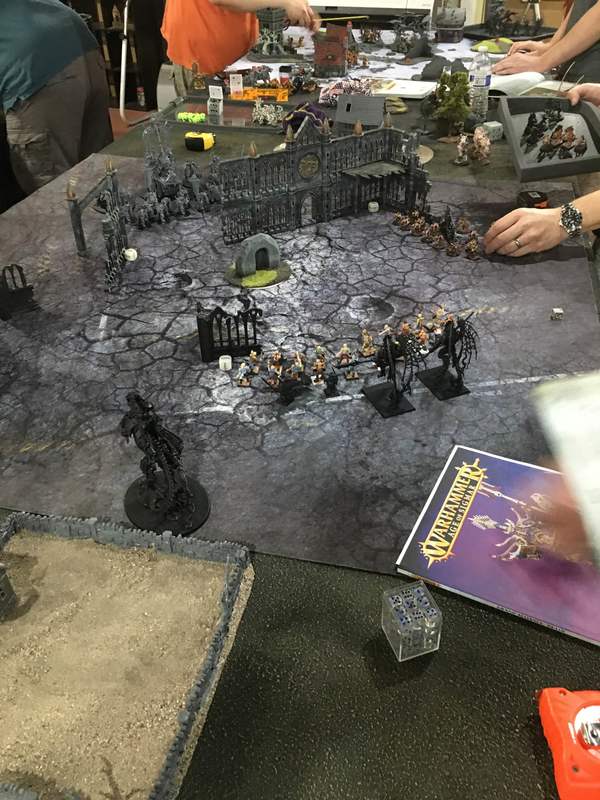 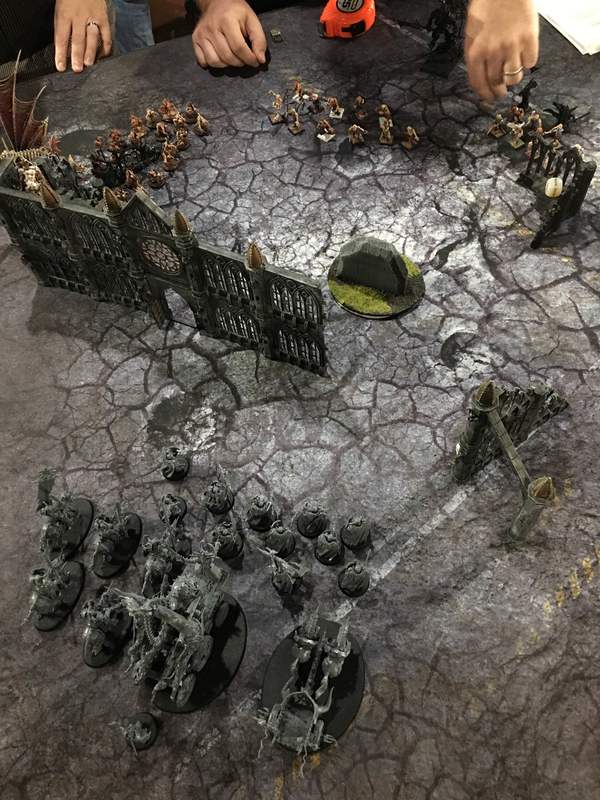 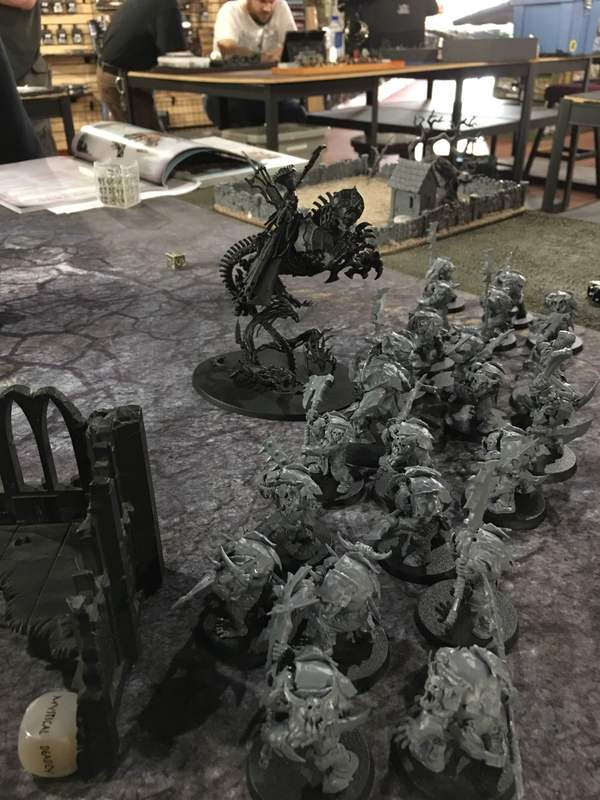 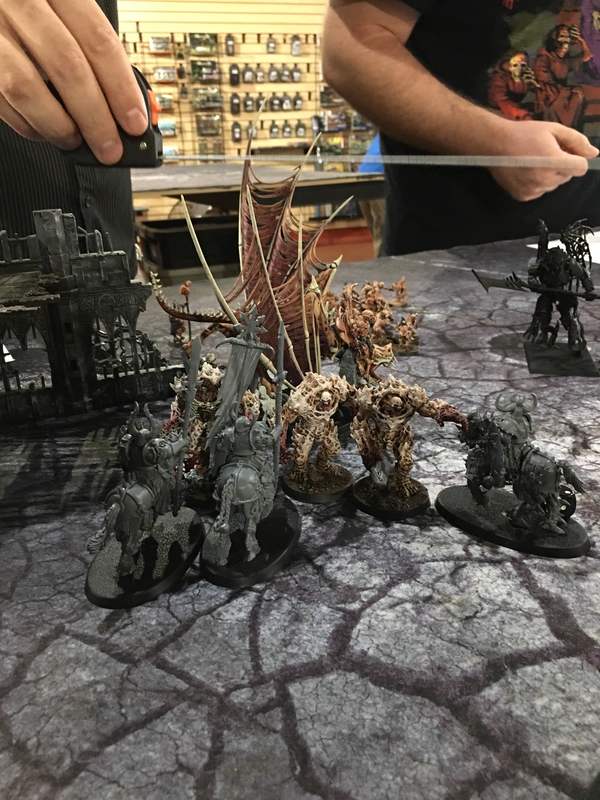 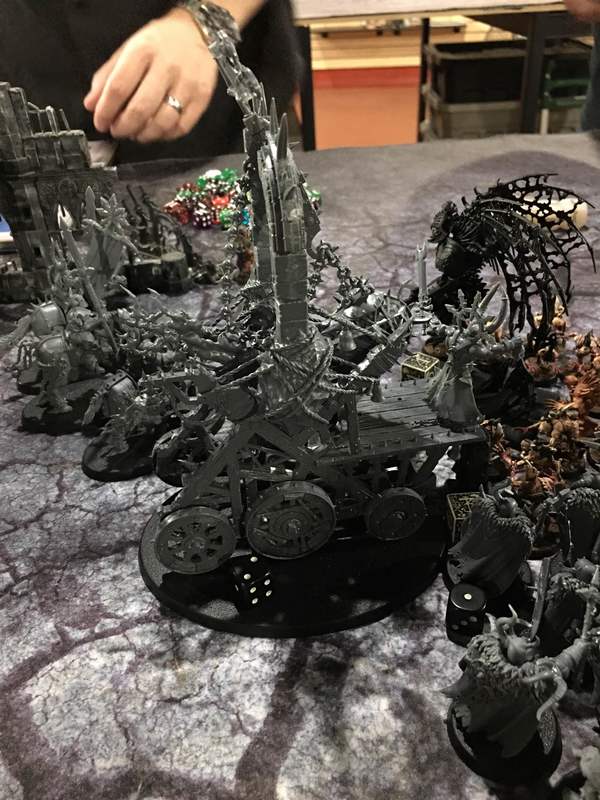