I just got back from Adepticon and what a weekend it was!  While I went to ACON not expecting to play in the GT, I ended up being cajoled into playing in the GT and did surprisingly well. I surprisingly found myself sitting on Table 2 in Game 5 and ended finishing 10th overall after losing in that final game to the individual who finished 1st.  I’ve had a lot of people ask questions about my list, so I figured I would do a blog about it and then follow that up with a couple battle reports from my games.


I’ve long been tinkering with Nurgle Mortal lists looking for that magic formula.  For competitive play, there is an entire suite of capabilities you want to have access to (high mobility, durability, chaff, etc) and Nurgle has to work really hard for some of those (i.e. Mobility).  I finally settled on a list that had most of these capabilities, but since I didn’t plan on playing in the GT at ACON, I didn’t finish painting up the models for my optimal version of this list.  So, I slightly modified my ideal list with what you see below:

This list looks ridiculously mundane at first glance.  Even when it drops on the table, most will look at it and go, “…ok?”  Dan Heelan very confusingly looked over at me at the start of Round 5 from Table 1 this weekend and asked how I got there with this list.  I take this as a compliment and proof of how very deceptive this list is on paper to how it performs in the game.

The list is a 3 drop inverted alpha strike list that involves flying the 28 Chaos Warriors up, stretching them out 1" apart (with a tail leading back to your line), and charging the enemy's units on the line on turn 1 (with only needing a 5 on the charge from the +1 charge on the chaos warriors against anything on the line).

The rest of the list does a variety of supporting functions.  Most of the heroes stay in the backfield spread out to zone the back edge from setups.  While I rarely ended up doing a full zoning spread, the following image gives you an idea of what that might have looked like after turn 1 (with still another unit of Blightkings omitted from this deployment): 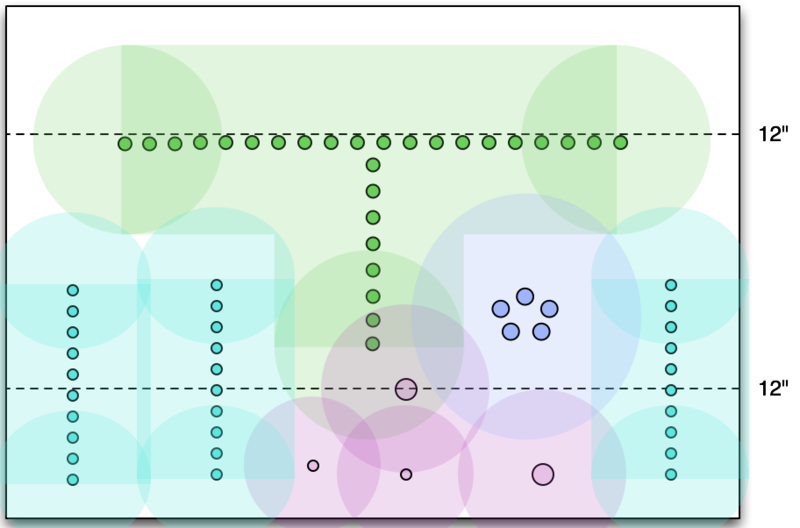 The synergy is rather straight forward once you get started.  Chaos Warriors get buffed up with Daemonic Power from the Sorc (reroll 1s to hit, wounds, and saves) and battleshock immunity from the Crown of Conquest, Mystic Shield from Be'lekor, a 5++ ward from the Harbinger (who is ideally safe in your back line).  This ultra buffed anvil unit then gets thrown forward with Sayl to establish the front line and grind down anything it touches.

The real magic of this combo comes from two things.  First, the Warriors are -2 to hit in melee that entire first combat turn (-1 from plague touched, -1 from cunning deceiver).  Even the best units will struggle to put significant wounds on a 3+ (reroll 1s), 5++, 5++ (against mortal wounds only) unit when they have a -2 to hit that unit.

Secondly, and more importantly, when you deploy in multiples of 7 with this battalion, every time the enemy rolls a 6+ to wound that unit in the Combat phase, the attacking enemy unit takes a mortal wound back.  Now, since this is triggering on their wound roll of 6+, I can still negate the actual damage with all the Warrior's defenses while still kicking back mortal wounds as the enemy grinds on the Chaos Warriors. This is doubly (or even triply) effective against Tomb Kings, Pestilens, and Destruction Battle Brew/Wild Fury who are bringing their own bonuses to wound, since it causes the mortal wounds to trigger more frequently (as my 4th opponent so painfully discovered with his double Stonehorns).  Once you have the front line locked, if they don't have movement shenanigans, you can pull models from anywhere in the line and break coherency (as long as you aren't going to pile in at all).  There were points where I had a single chaos warrior back in back field (to receive buffs), with the next closest Chaos warrior in his unit 24 inches away grinding on the remains of their front line.  If I ever needed to reform, I could cast Sayl fly on the back warrior and retreat the unit with an 18" fly move back into coherency.

The matchups I was most concerned about were coming against a Kunnin Rukk or the Beastclaw Thundertusk/Stonehorn mix, each for different reasons.  The Kunnin Rukk could potentially overwhelm the warriors with hundreds and hundreds of attacks, while threatening or killing any of my support units with bad positioning.  The Beastclaw mix on the other hand could potentially just shatter the front line with overwhelming power and pick off support units with Snowballs.  I didn’t have a chance to play either of these lists coming into ACON, especially since I was still finalizing this Friday night at 11:30 PM.  Despite proverbially building this plane in the air, it performed remarkably well.  My matchups were Kunnin Rukk, Bloodbound, Phoenix Temple, Beastclaw mixed-Destruction, and the winning Tzeentch 18 Skyfire/Loc/Kairos list (on a table where almost all the terrain gave +1 to hit).  I didn't see any SCE or Sylvaneth in my matches, although I would have changed tactics accordingly and bubble-wrapped/zoned with the Warriors as well.  Nico helped me think about some of these matchups before hand, which helped tremendously in piloting my list.  To that I am greatly appreciative.

Immediately after I finished the final game on Table 2 with Kaleb (who won the event), Kaleb interrupted my congratulations and informed me that my list was the hardest list he's played all weekend (I believe including the other AOS events he was in) and not just harder, but at least twice as hard as anything else he had faced.  All of his other opponents he had tabled with an hour or more to spare.  In our game, I led the points (he was in fact shut out) until the bottom of our very last turn.  The structure of the scenario definitely raises some design questions but that is a post for another time.

The reality is that this list differs quite a bit from most of the other popular lists in the game currently.  Instead of having easily recognized power centers (most lists have 2-3), the power base of the list is diffuse.  This lack of obvious power bases (besides the front line) can often confuse opponents as to what is the best unit to attack and force them to play their list in a way that they’ve never had to, which will often also cause people to make mistakes.  In fact, many opponents will have no idea what they are looking at when you drop it until you fly the Chaos Warriors forward in their flying "T" formation and even then most will think they can just slam against the warriors and break the line.  This confusion on target priority and tactics is one of the strongest assets of this list; I'm not sure how well it will fair if it becomes a well-known quantity down the road.

I'm doing a video about this list later this week with MC1Gamer based on the one trial "game" we played.  Here's a glimpse of that game during my turn at the top of 1: 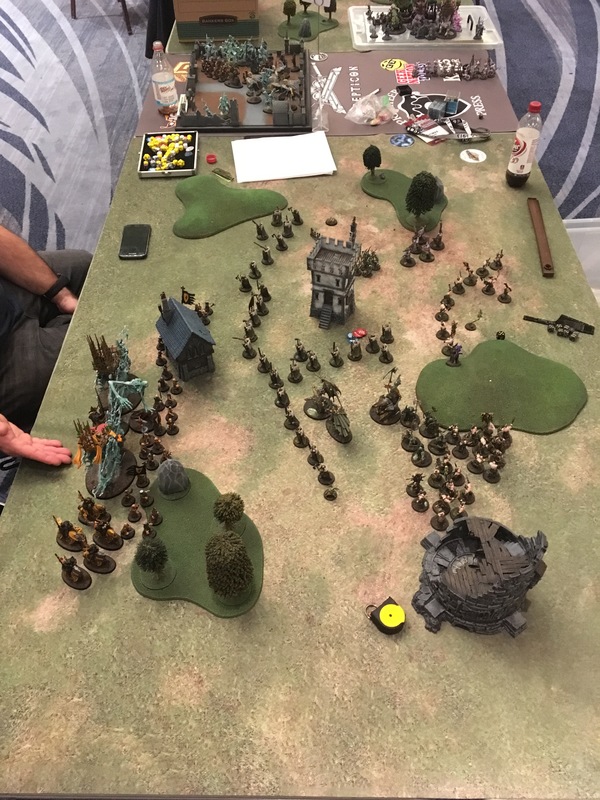 In the posts that follow, I’ll go over each of my five matchups and a brief battle report of each game.