I opened the event weekend on the night before the official event with a warm-up game with Kenny Lull of Combat Phase podcast fame.   Kenny has been playing straight Fyreslayers since last year and was on track to get his 100th game of pure Fyreslayers during the weekend event.  Kenny was also giving the new Fyreslayer points a test so I jumped at the opportunity to help him get to 100 games and try the new points out!


We played on Table 1, which was the beautiful Invasion of Ghyran table with the stunning Tree of Life.  Order was tasked with defending the Tree from my nurgly Horned Legion.  The objective was to end the game with more models next to the tree at the end of turn 5 while there was a secondary objective of accumulating points from three grail objectives. 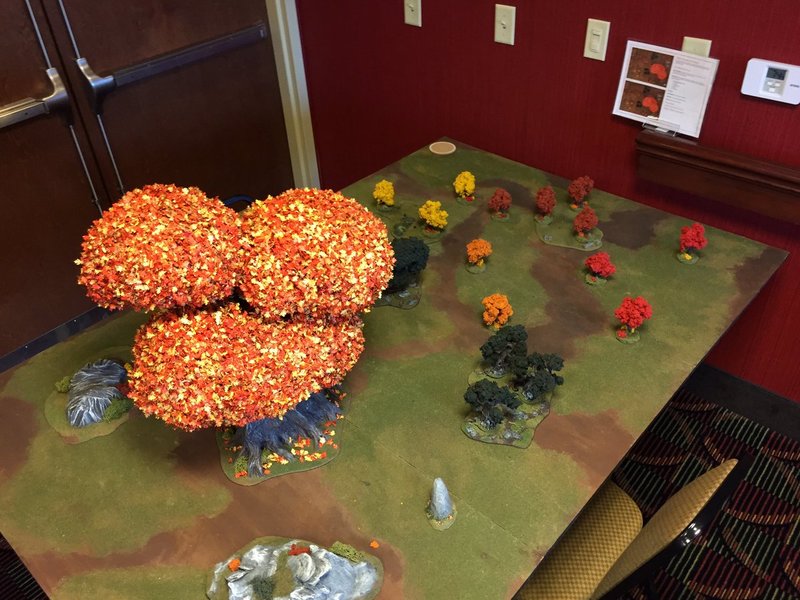 The foot slog across the whole length of the table was a long walk for Nurgle.  Luckily the siege was able to keep pressure on his force and continue to clear off the secondary grail objectives near him. 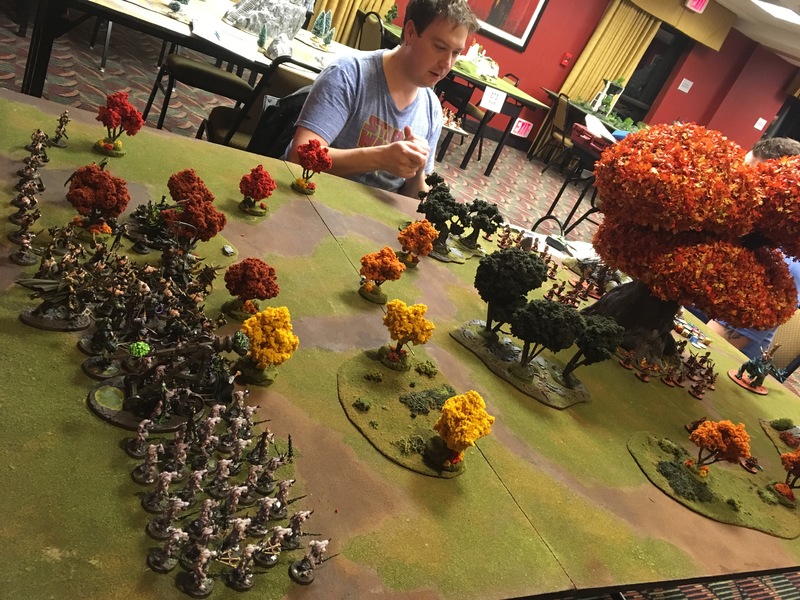 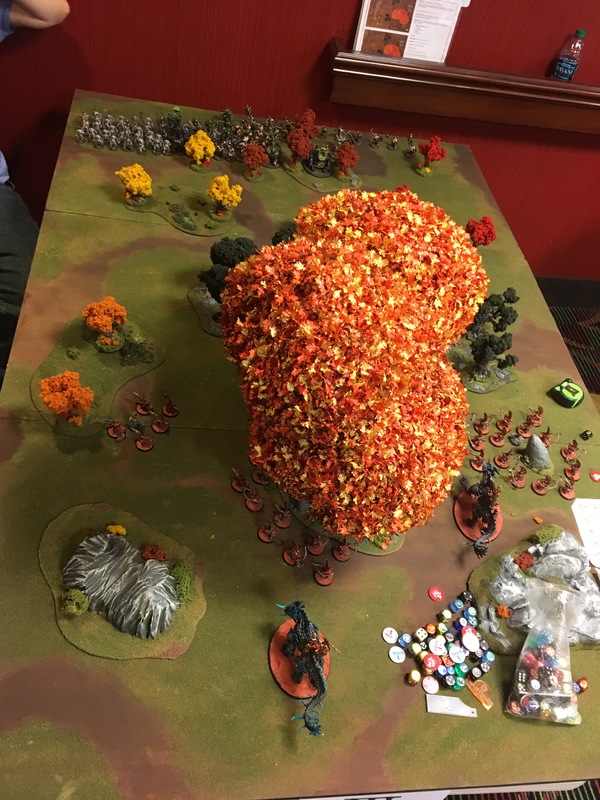 He had two tunneling units of 25 Vulkites but I was running enough units that I was able to spread out and stop them from deploying anywhere behind my front lines.  He wisely brought them up in turn three because I think I could have continued to spread my 30 man units out and potentially deny him the ability to bring either unit up at all. 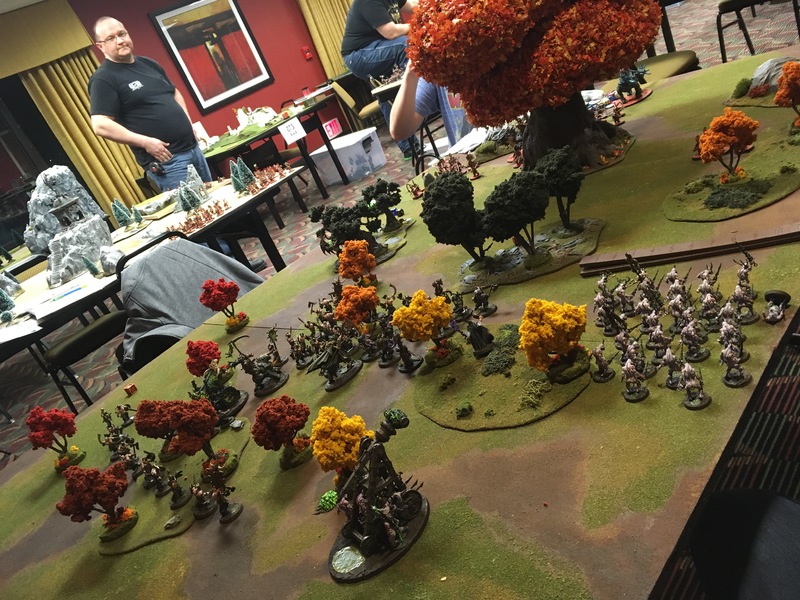 We had a pretty straight-forward clash right under the boughs of the tree but there wasn’t enough time to really widdle the Fyreslayers down enough, especially with 50+ battleshock-immune models with a ward save popping up late during turn 3.  The game ended with a win for Kenny after a grueling fight. 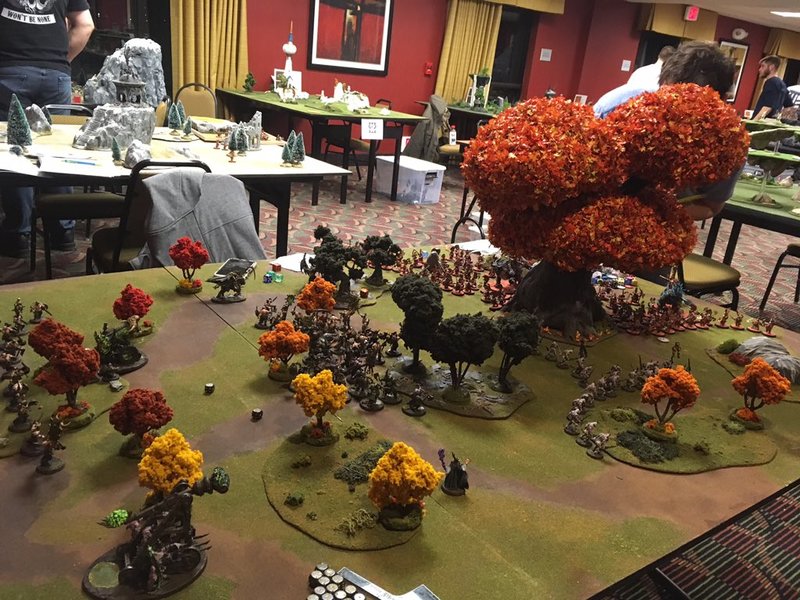 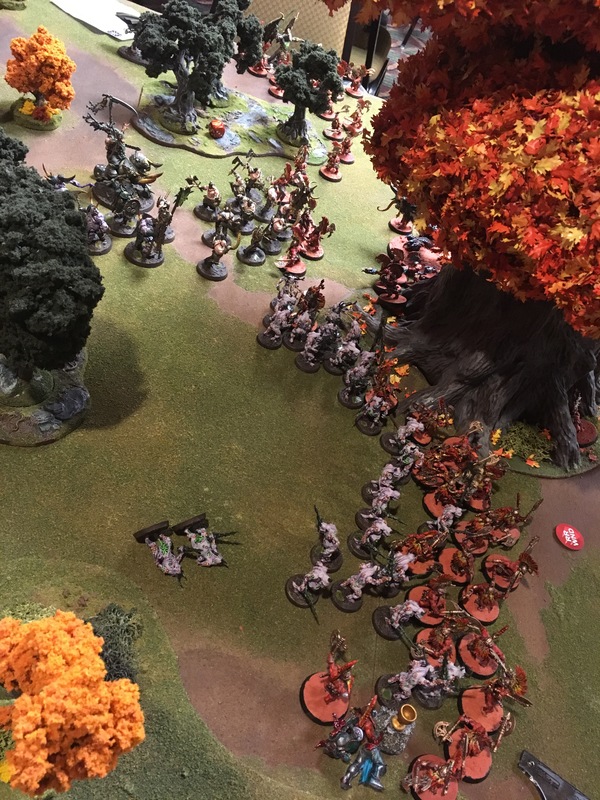 While I think some of the Fyreslayer point adjustments were needed, my suspicions about the new Vulkite costs were confirmed.  I think 60 points is too low for 5 of those models.  They should have stayed at 80 for 5, or only dropped to 70 for 5.  While 70 would be unusual, Plaguemonks are at 70 points per unit for example.  At 120 for 10, you would be getting the arguably best generic Battleline unit in the game with a potential 4+/4++ saves, 2 attacks per model, 4+/4+/-1/1, 5 mortal wounds on the charge, and the ability to deepstrike with a hero (for 80 points) that also grants wound rerolls.  Oh, and they get to reroll one of their charge dice to land that 9-inch charge after dropping.  Oh, and they have a short range ranged attack on all of this for a couple extra wounds per round.  This is a discussion though for another post.

The game was a blast and Kenny was a great opponent.  I’m glad I was able to help him in his push to 100 games with pure Fyreslayers (right at almost the 1 year anniversary of the army nonetheless)!  If these new points stick, I’d be lying if I didn’t say I’m heavily considering a FS army, or at least a meaty contingent for battleline. 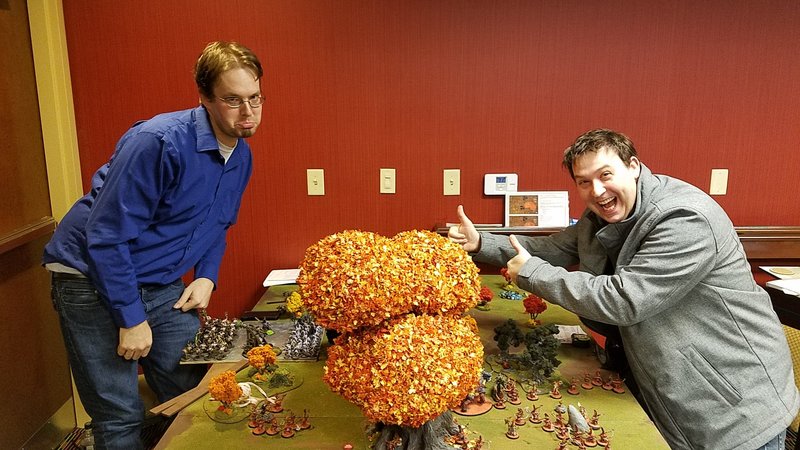