In this post, we finish our survey of the stunning tables of Holy Wars 2017, including the floating earth motes of Azyr and the scorched crust of Aqshy.

Table 11 –The Upside Down 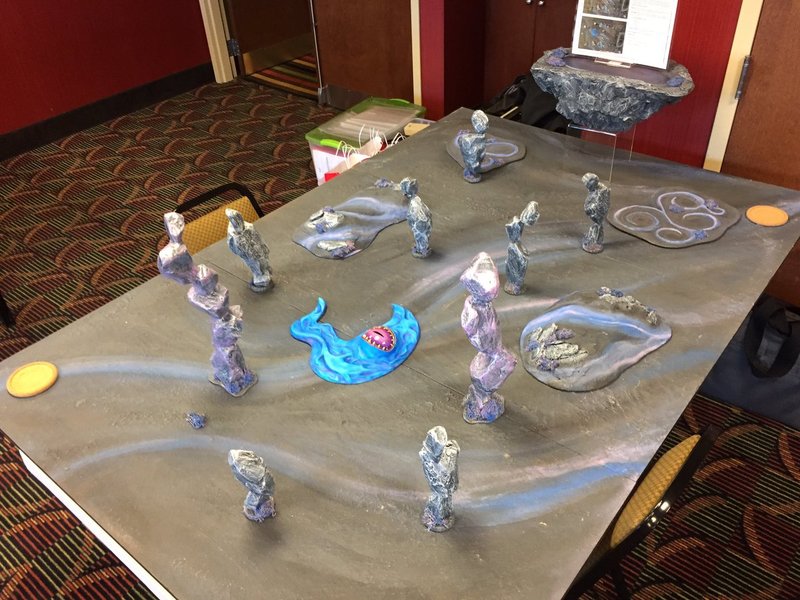 The main objective in this scenario is a series of take and holds of pillars strewn throughout the table, some pink, some standard.  The pink points netted you 2 points per turn instead of the standard’s 1 point, but also did unpreventable wounds to your unit.  The player at the end of the game with  the most points won this objective.  The grail objective was an escort style mission where players carried Grail tokens from the Black Pit of Tzeentch to the Eye of Tzeentch.  The player to deliver the most tokens (there were three total) to the Eye wins.

Table 12 –Death, The Next Step

The devoted to Vlad still seek his power and leadership in the Age of Sigmar. His sacrifice during End Times has not been forgotten by his followers. 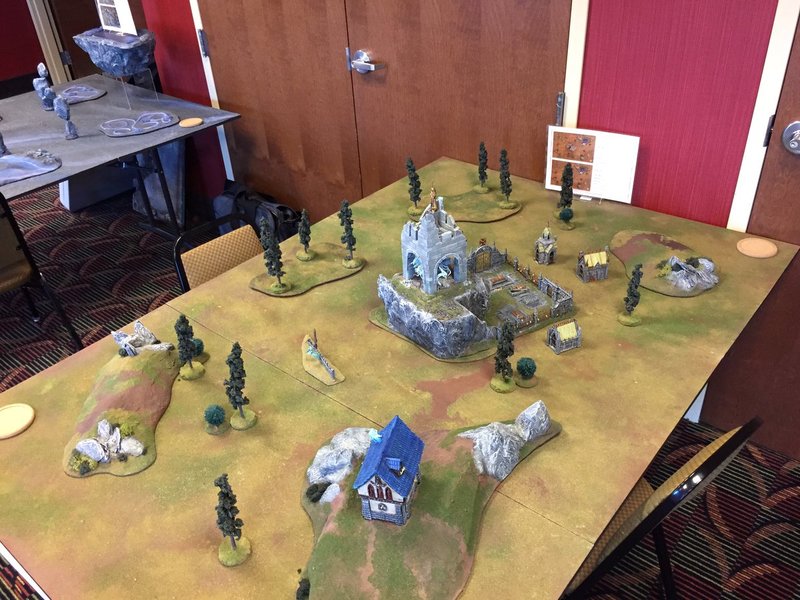 This scenario was a take and hold of a central objective.  Those garrisoning this objective, the tower of Vlad, could invoke the power of Vlad to do unpreventable damage to their enemies.  The player who caused the most wounds wins this objective.  The Grail Token objective was a trio of grail tokens spread throughout the table and controlling them accumulated points each round.  This was a new board for Holy Wars 2017 and the zombie chapel was inspired!

The Skaven unquenchable hunger continues in the new age. 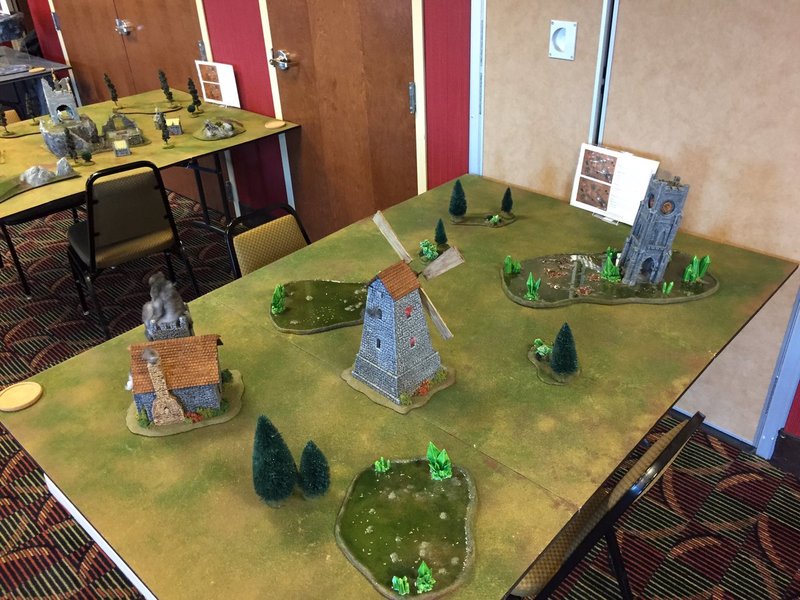 This scenario involved the raiding of the Windmill Grain Mill for resources but in order to do so, one had to first take a and hold the Clock tower and then their auxiliary (imaginary) troops would gather resources from the Grain Mill.  The problem for the take-and-holding player is that this Windmill was sinking into the mire each turn doing unpreventable wounds to the garrisoning unit.  To make matters worse, all of the pools across the table were an augmented version of deadly terrain that required a d6 roll if you moved or ended movement on them at all, with a 1 causing the automatic death of that model.  The grail tokens, unsurprisingly, were strewn throughout this board in these toxic pools of death.  Fun times for all.

Chaos seeks to dominate the Realm of Aqshy and the powers of the Shifting Monolith ravages all. 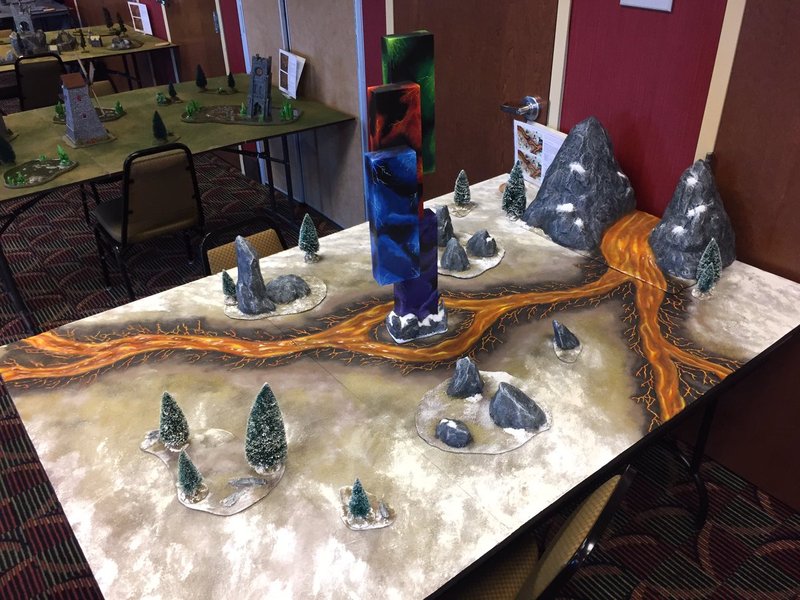 This scenario involved the manipulation of a Shifting Monolith.  Players could control the direction of the monolith although the distance traveled was variable.  As this shifting monolith traveled over units, it did unpreventable wounds to units it traveled over (including your own!).  The player who accumulated the most wounds done in this way won this objective.  Those near this objective did indeed gain a +1 to saves, which could certainly be significant in some cases.  The Grail Token objective for this board were again a trio of tokens spread throughout the table and controlling them accumulated points each round.  This was a new board for Holy Wars 2017 and what a beauty it was!

Table 15—Azyr, the Realm of Heavens

Those who seek the knowledge of Sigmar must brave the perils of a quest that will test their resolve as never before. 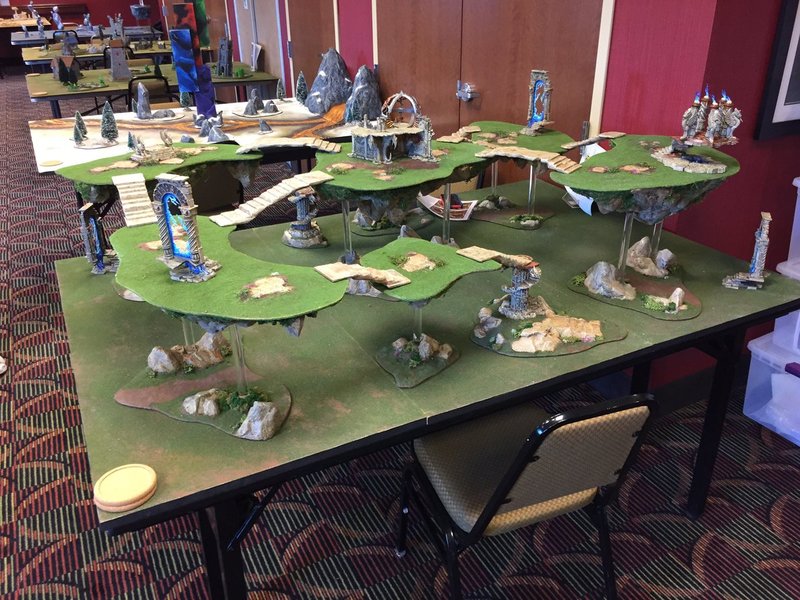 Despite the wonderful detail of the Aqshy board by Herner, the real new gem in this event was the new Azyr board.  This board was composed of a number of floating earth motes with Sigmar’s Occulus on the central floating island.  Those near this objective could call Sigmar’s lightning down on nearby units.  The player who did the most wounds in this way won the objective.  The Grail Token objective for this board were again a trio of tokens spread across the table, underneath the earthmotes! The player controlling them accumulated points each round.  This was the real gem of Holy Wars 2017 and people were clamoring to play on it.

In the next set of posts, I’ll go over my individual matchups with a brief battle report on each.