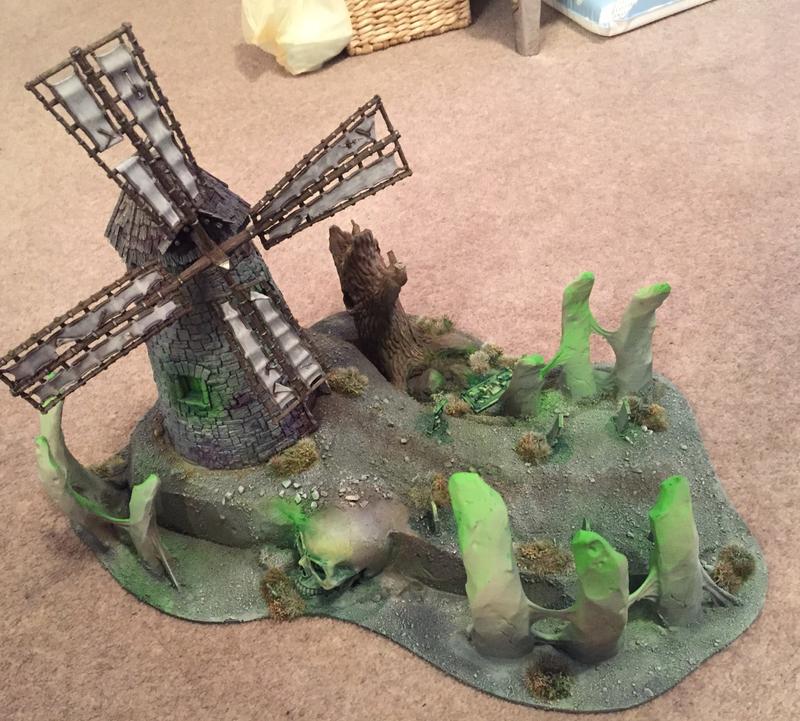 I've long been an admirer of the Table Top World terrain - it always appears to be excellent quality and well detailed terrain. Some of it is very expensive, but they have a few pieces that are more reasonably priced, and one of these is the Windmill. It turned up quickly and was well packaged, with all the pieces securely packaged inside the main building section. The casting quality is very good as well, and there was barely any clean up needed. 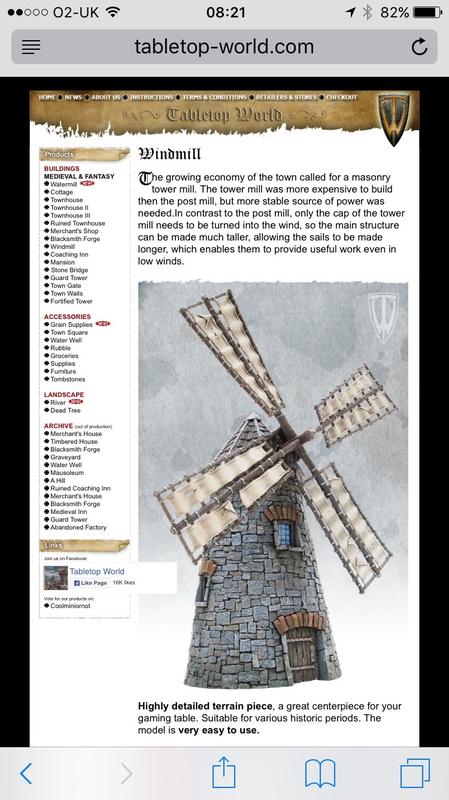 I had a plan for the base that I wanted for the windmill, which was to place it onto a step which was surrounded by some of the excellent ribs from Gary M on Twitter. You can see here how it would be situated. It was important that there was a lot of space around the windmill as I had a little plan for it, so raising the height seemed like a good idea. In the photo below you can also see some the other death terrain pieces in their earliest stages and showing how I generally lay out terrain at the beginning of the process. 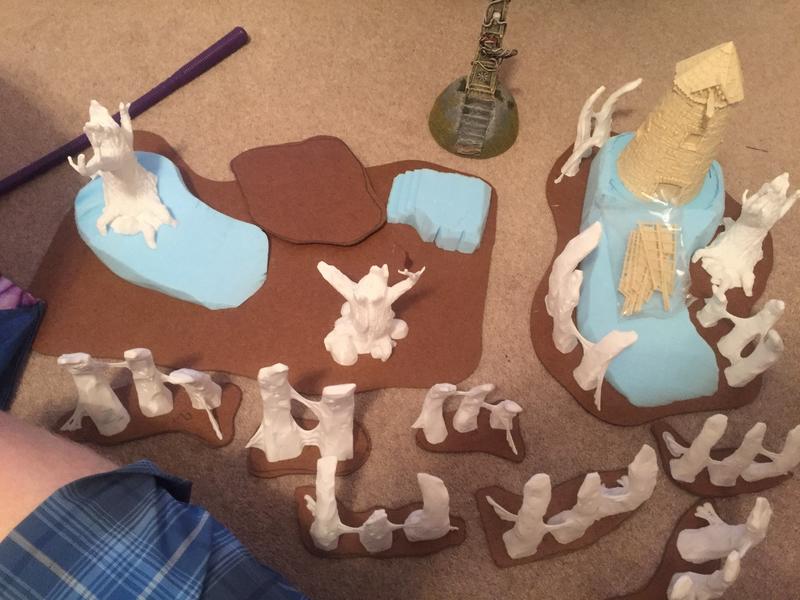 Once I had cleaned up the Windmill I started on the conversion process. I ordered a very small motor from Pimroni that had a rotational speed 14 rpm. These come pre geared so all you need to do is add a battery pack to them. I ordered a 6amp circular battery holder from Ebay to power the motor and this was attached simply using a few wires and a terminal block. It didn't matter which way the batteries are connected to the motor - all this does is change the direction the motor spins, so you really can't go wrong. Mounting the motor inside the windmill was slightly more challenging. The top of the windmill is cast separately which is a good start, however I had to drill out the hole for the spindle to go through. I replaced the spindle with a small piece of wooden dowel which I drilled on a centre lathe to ensure the holes were located accurately. I drilled a small hole all the way through so that the sails could be mounted and pinned to one side and the other could be pushed on to the spindle of the motor. I then mounted the motor on some hard board and glued it into the top of the windmill. Once I'd done some testing to make sure that everything worked well I glued a ring into the top of the windmill to allow that to be rotated as well. 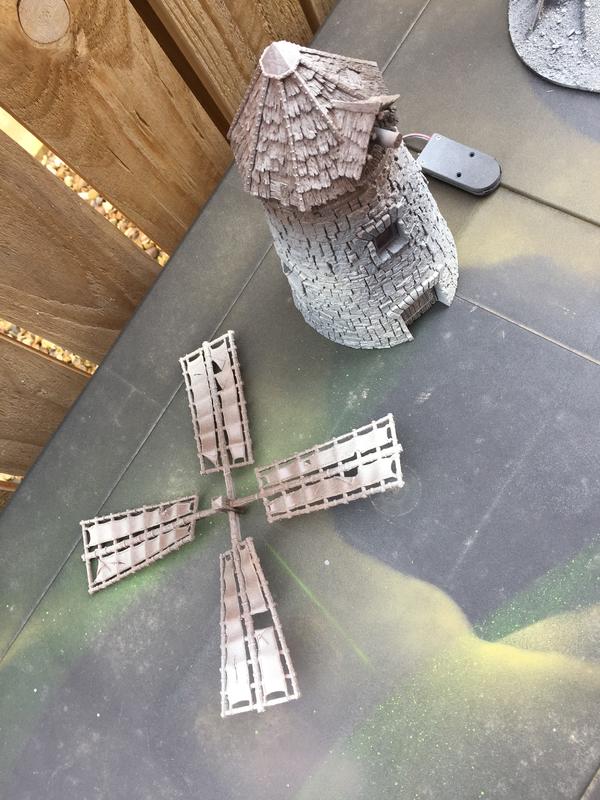 To paint the windmill I used some spray paint and gave the whole thing a few cots of dark grey, light grey and white to pick up a lot of the raised detail. I sprayed the top brown, and didn't worry too much about over spray on this as it would just add a bit of variation on the stone. 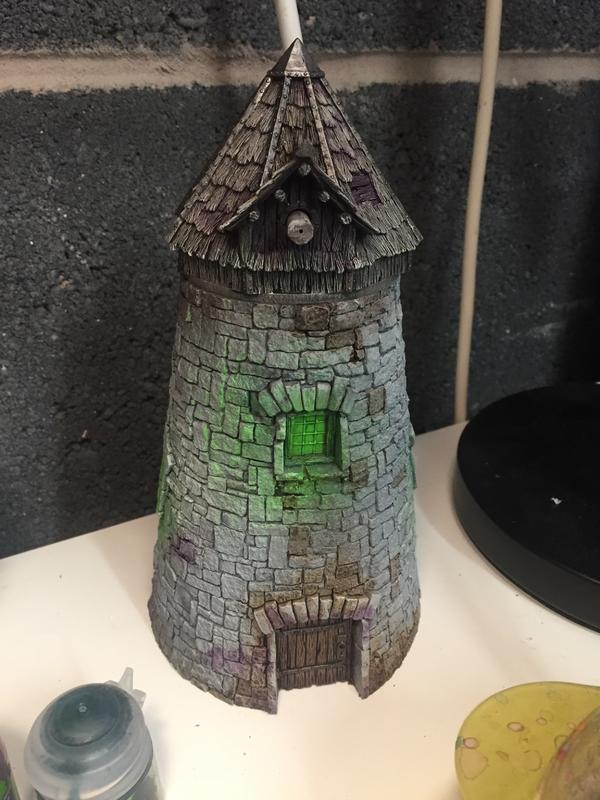 Once it was dry I washed the whole thing with various different colours and made sure to dry brush the whole thing. This picked up all of the great texture on the model . I was able to selectively wash various stones with blues, green and browns which just adds a nice amount of variation on the piece. I then carefully sprayed the windows with a bright acid green paint to do a glow effect. The Sails had to be painted by hand and took a bit of time, but I didn't spend a great deal of effort. 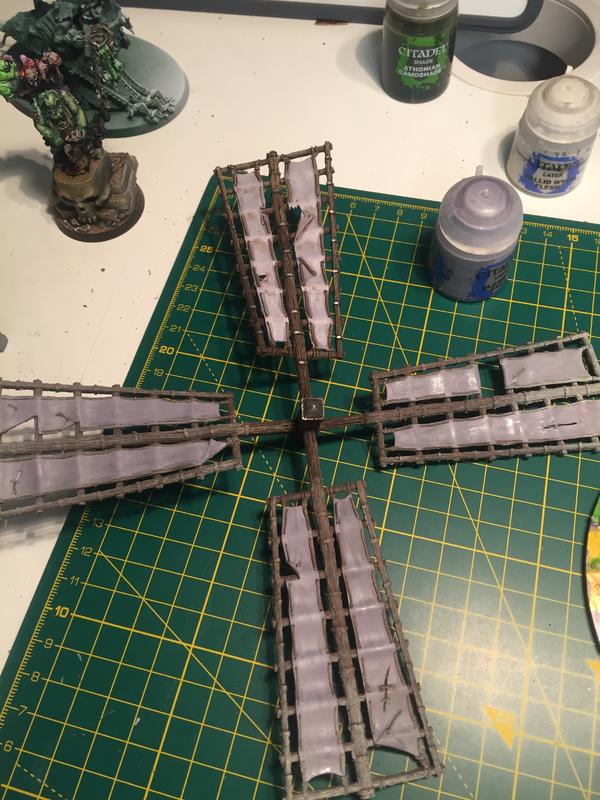 Once this was done I was able to finish mounting the model onto its base. Overall I was happy with the colour scheme and the overall look, and hopefully it will be well received by players at the event this weekend. 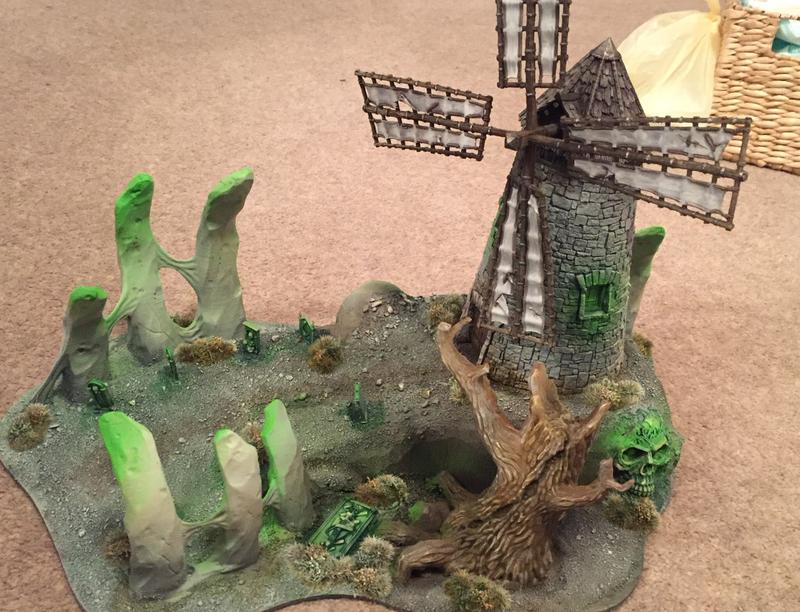