It is rare to have a score so disproportionately reflect the thrashing one receieves from their opponent and yet this was one of those games.  After my big win against Walter, I was pushed up to the top tables where I squared off against Domus’ beautiful Ironjawz, whose images have been making the rounds these past weeks on social media.

The objective for the Skaven Hunger Games table was fairly straightforward.  The main table objective was a sinking Belltower that needed to be garrisoned in order have auxiliary (read “imaginary”) troops raid the food stores.  The problem was that the bell tower sank each round and caused ever-increasing unpreventable wounds to those inside.  The other problematic element on this table were the copious toxic pools, which were an amplified version of dangerous terrain: any model who moved in or ended their move on the pool rolled a dice and on a one was instantly removed as a casualty.  The fact that the Belltower was in one of these pools and could only be garrisoned if you were up against the door at the start of the movement phase only compounded the deadliness and complexity of fulfilling the table objective.  It also didn’t help that all three of the Grail Objectives that you had to control with 5+ models within 6” were also within these toxic pools of death.  Fun times.

I knew I was in trouble when I sat down across from Domus.  I was staring down an exceedingly fast, hard-hitting army that I didn’t have obvious solutions for key pieces.  He was running a 15 block of brutes (whos big boss was his general), a Megaboss on Mawcrusha, a Megaboss on foot, a Warchanter, a Weirdnob Shaman, 10 Ardboyz, and two packs of 3 Goregruntas, with all the non-hero units unsurprisingly in the Ironfist battalion. 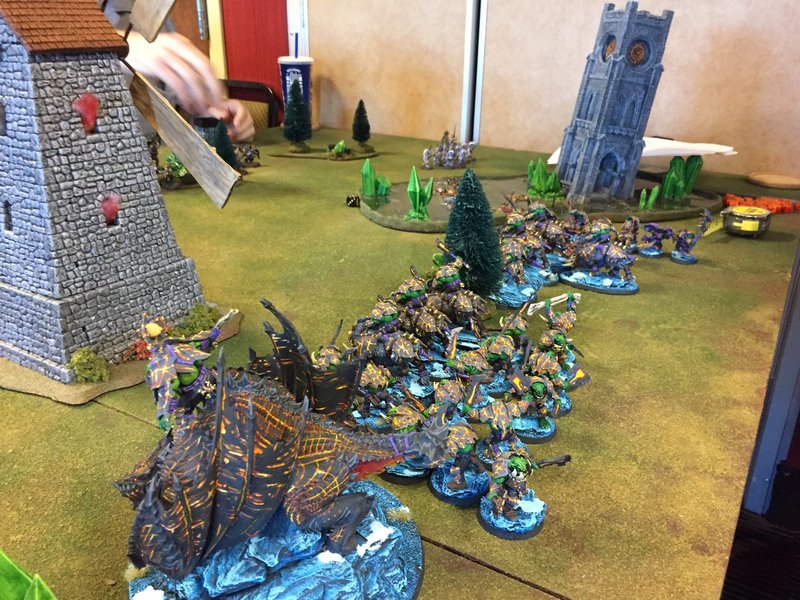 After a long bit of deliberation, I decided to drop my normal deployment: 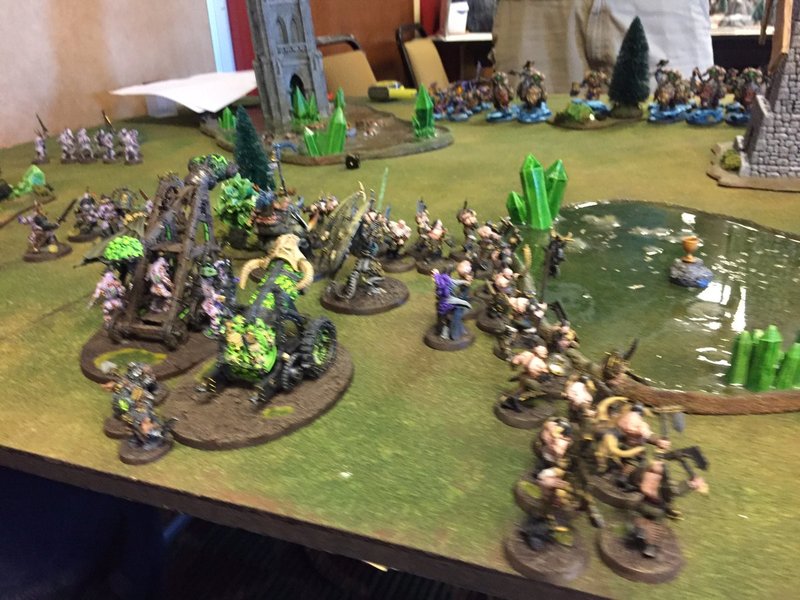 I knew he would be in my siege’s face turn one but I needed the rend and mortal wounds to punch through that overwhelming 4+ I was staring down.  I wasn’t sure how I was going to deal with the Mawcrusha or the 15 block of Brutes but I chose the best chokepoints on the battlefield on my side (given that Domus got to pick his side). 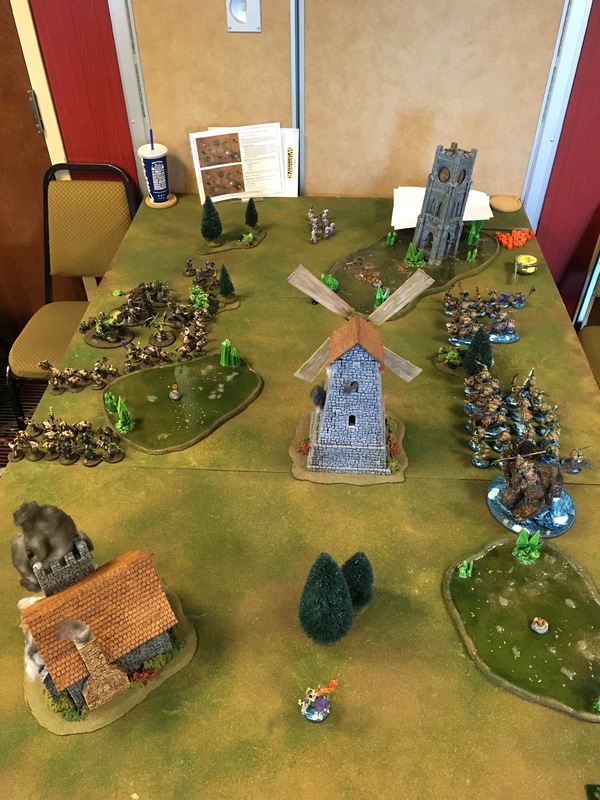 It became obvious very quickly what his tactics would be.  He set up his Ardboyz supported by the Megaboss on foot right on the line to double hero phase move up to the tower so he could garrison it at the top of Turn 1 (which he would take because he finished dropping before I did).   The set up the Pigs on the front line to charge ahead and potentially split off onto flanks, and the Brute block to charge in behind them, right up the middle.  He rightly knew there was little in my army that was going to stop 15 Brutes backed by a Warchanter.  On his far flank he set up his Mawcrusha, likely hoping to pick off my 10 marauders I had set up to run after his Grail objective, and his Weirdnob Shaman, who had a direct line to the Warlock House, a terrain piece that would double the range of all his spells and let him rain death down on my back lines and my vulnerable Hellcannon crew.  Given the multitude of the threats, I knew that if those Aardboyz made it into the Belltower, I would likely automatically lose the main objective because I wouldn’t be able to shift them out quick enough.  Given this, I chose them for Belakor’s Dark Master ability and hoped it would gum them up on Turn 1 and give me a chance to contest that point. 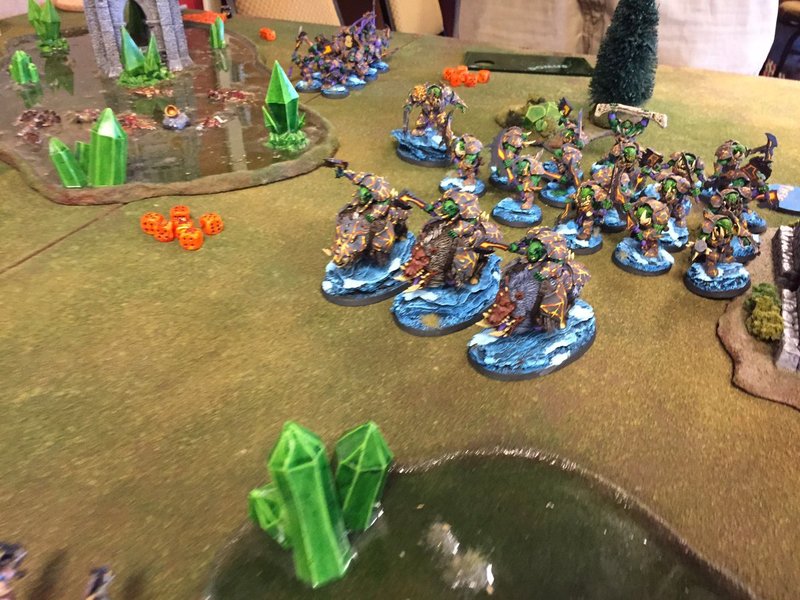 Turn 1 played out mostly how I expected.  He moved on the tower but the Belakor’d Ardboyz couldn’t make it all the way to the door and thus stopped at the toxic pool edge.  On the other flank, his Mawcrusha moved up to threaten my flank and guard his Weirdnob shaman who was moving on the Warlock tower (but didn’t make it in Turn 1).  In the middle, everything else rushed up quick and hard.  The Gorerguntas made a charge so he pulled them way out and around, hitting my Blightkings on my left flank and killing a couple.  Because of this, he had a longer charge on his Brutes into my Marauder front line, which he failed.  If Domus made any mistake this game, it was not sending the Goregruntas directly into my 20 Marauders at the top of Turn 1 and battleshocking them off the table. 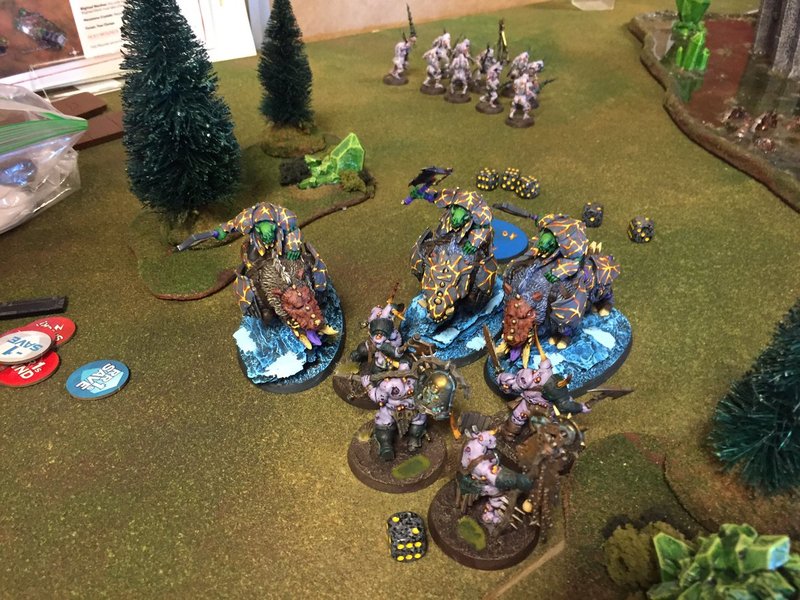 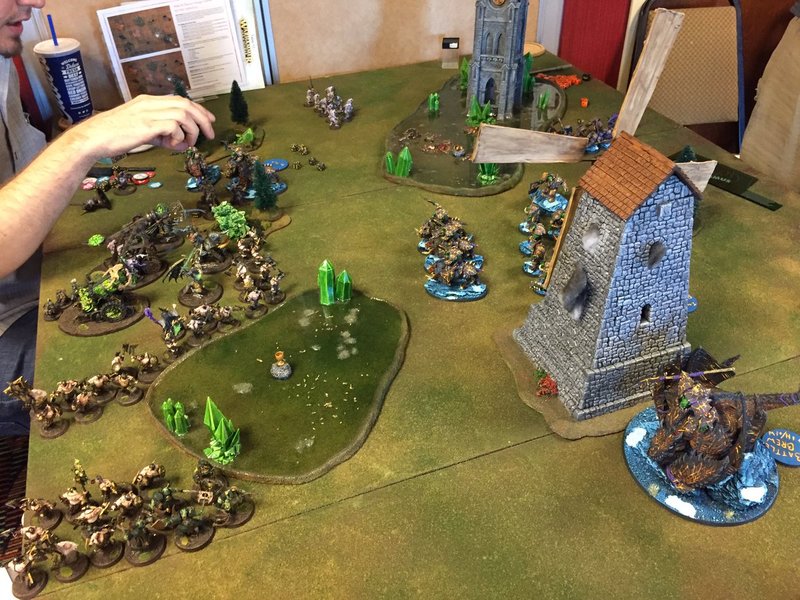 Bottom of turn 1 rolled around and I knew two things: 1) this game was going to be ugly, and 2) if I was going to not be tabled, I was going to have to make some desperate gambits.  After my standard round of buffing, I moved my 10 Plaguebearers towards the Bell Tower, while sending a Sayl’d unit of Blightkings out to his Weirdnob Shaman.  I aimed to accomplish two things with this move: 1) kill the Shaman who could rain death down upon my back lines with double range spells and 2) bait the Mawcrusha far away from the primary combat.  I didn’t have a solution for him so he needed to not be in the fight.  The Blightkings made it into the shaman, surrounded him, and proceeded to kill him with tons of exploding attacks.  Yay, a morale victory.  Belakor assisted the closer Blightkings with the engaged Goregruntas.  My artillery rained down on the Ardboyz, killed a few, and the rest of my units prepared for the ugly fight that was about to happen. 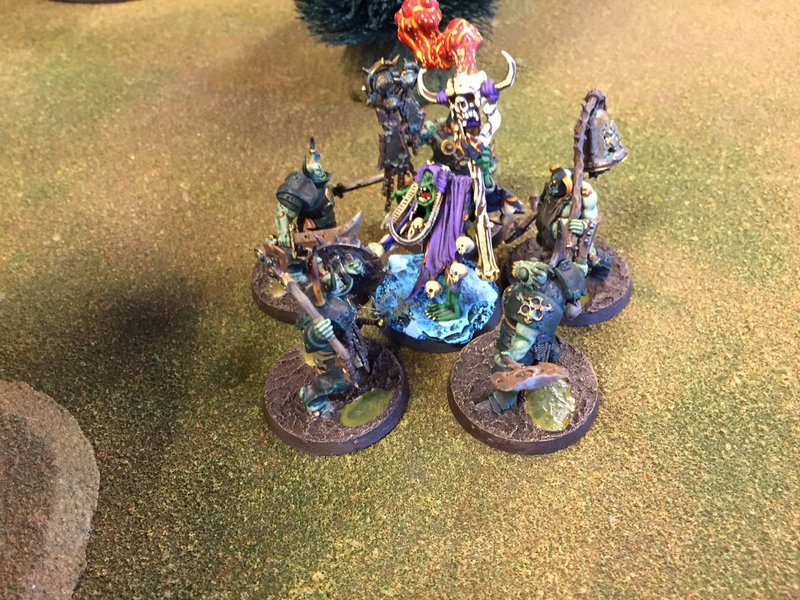 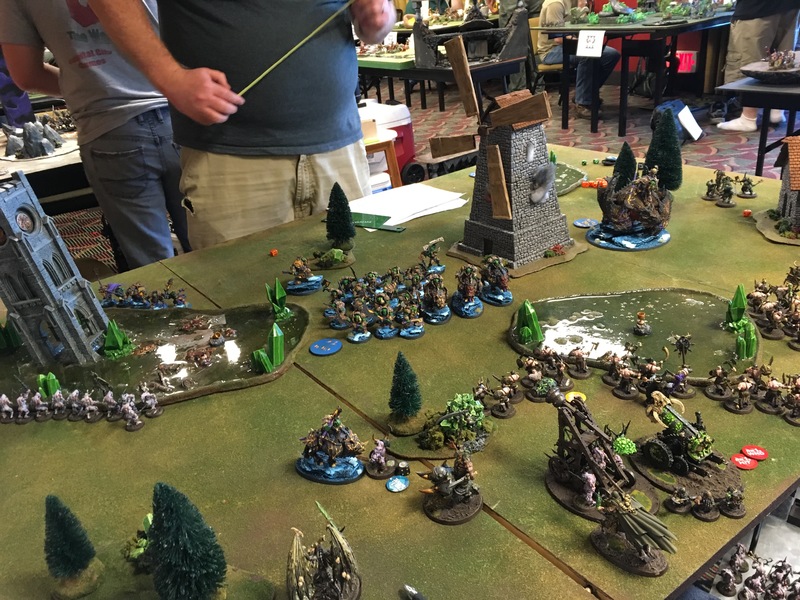 The bloodshed the came with turn 2 was expected yet still somehow surprising.  He got into the marauders and cut them down to a handful of models, despite being in a chokepoint.  His lone Goregrunta died to Belakor and remaining Blightking while the other group of Goregruntas looped around and pinned my 10  Marauders in the other chokepoint on my opposite flank.  Domus rolled really poorly on the Ardboyz so he wasn’t going to be able to hero phase move them up to the door, so he decided to keep them out of the swamp for another turn.  His mawcrusha took the bait and unsurprisingly charged in and destroyed those Blightkings on the far side of the table.  By the end of his turn 2, my lines had almost all but collapsed.  I was pressed on basically every side, and realized something drastic had to happen.

Looking at the remains of my force, I knew that I had a resource that Domus definitely didn’t have: cheap bodies.  Those toxic pools were ultimately a lot more dangerous to him than they were to myself so I decided to capitalize on this.  I realized I needed to get Sayl across towards the Belltower since Domus had been delayed and hadn’t garrisoned it yet.  The plaguebearers at the Bell Tower piled in on that Grail Objective, thus outnumbering Domus’ remaining forces there and taking control of the objective.  Sayl also flew out to that now open left flank to be able to support it next turn.  I knew my marauders on the opposite side wouldn’t be able to break for his Grail Objective, especially with a Mawcrusha between them and it, so those remaining marauders retreated into the toxic pool on that flank around the Grail token.  My remaining primary marauder line retreated and reformed since I wanted to fight as few combats with that Brute line as possible on them. 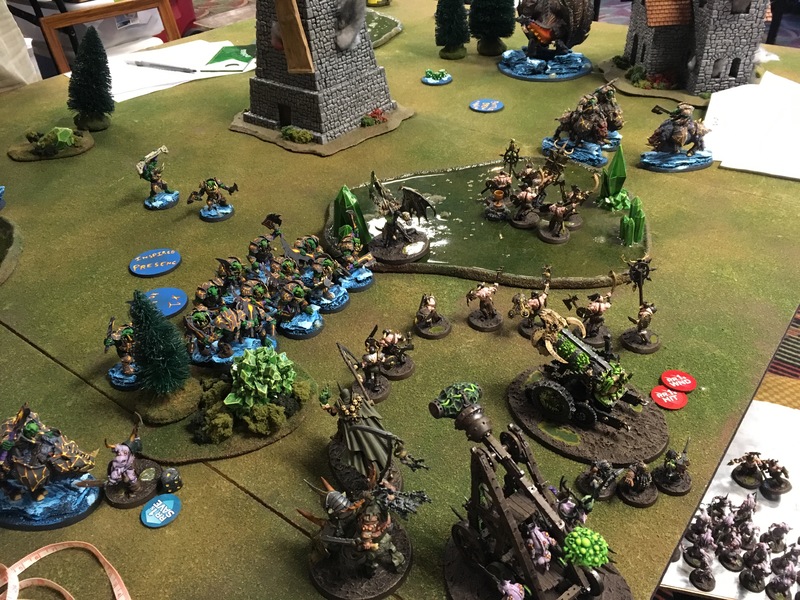 But that Brute line still needed to be stopped.  It was at this point that I heard my cohost’s voice in my head (I promise this doesn’t happen often): “If you want to win big, you have to risk big; sometimes you have to roll the hard 6.”  Hardly believing what I was doing, I mystic shielded and reroll 1’s buffed Belakor up and charged him into the deadly swamp on the Brute’s flank, pinning them from the side in combat with Belakor.  In prior games, I’ve sung the praises of Belakor, but those performances are nothing compared to seeing the First Daemon Prince with a 2+ reollable save that is immune to Rend lock down a unit of 15 Brutes, all the while being forced to make a roll at the end of each movement phase and risk instantly dying on a 1. Did I mention that I had already blown my tournament reroll die when I decided on this plan of action?  "Go big or go home," right? 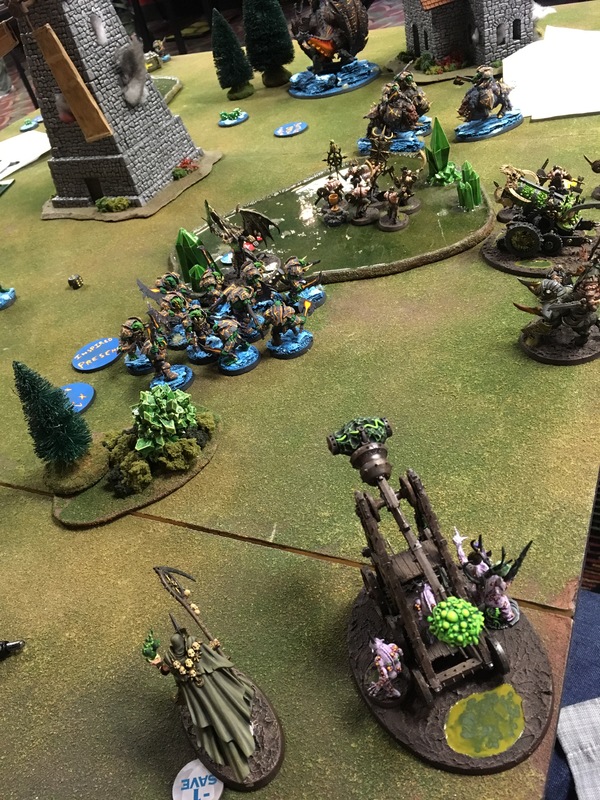 So Belakor heroically tanked those Brutes, and held them pinned there for the rest of the game, slowly whittling them down and taking zero damage.  Domus’ Mawcrusha even came charging in on Belakor’s back in the final round but, other than a couple mortal wounds that Belakor regen’d from my own fleeing Marauders, Belakor held firm. 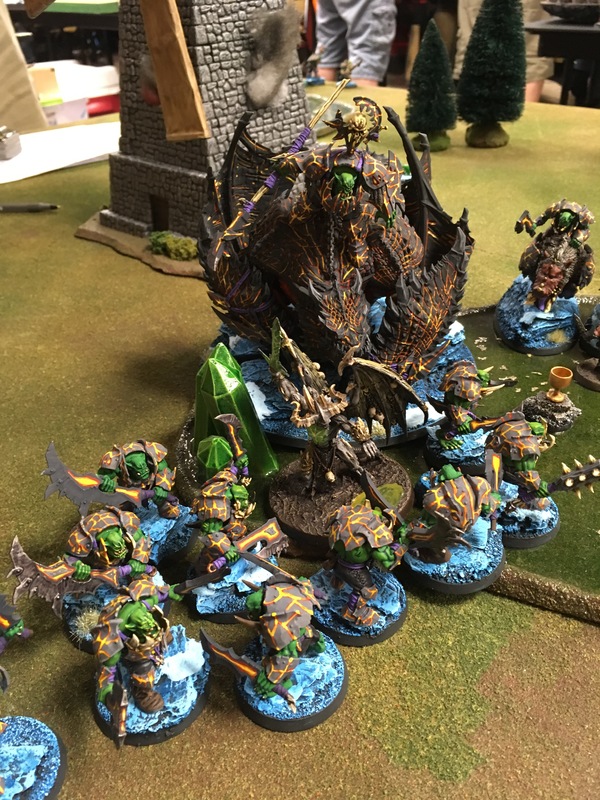 At the Belltower, in my next Hero phase, I dropped 20 plaguebearers down near the door from a 3-diced summon from Sayl (although I would still have to spend a round getting up to the door).  Anticipating what I was doing, Domus tried to rush the door and garrison it with both his lone Aardboy and Megaboss, but both rolled 1’s and were instantly killed, all the while 25+ plaguebearers looked on from the midst of the filth completely unaffected by their surroundings. 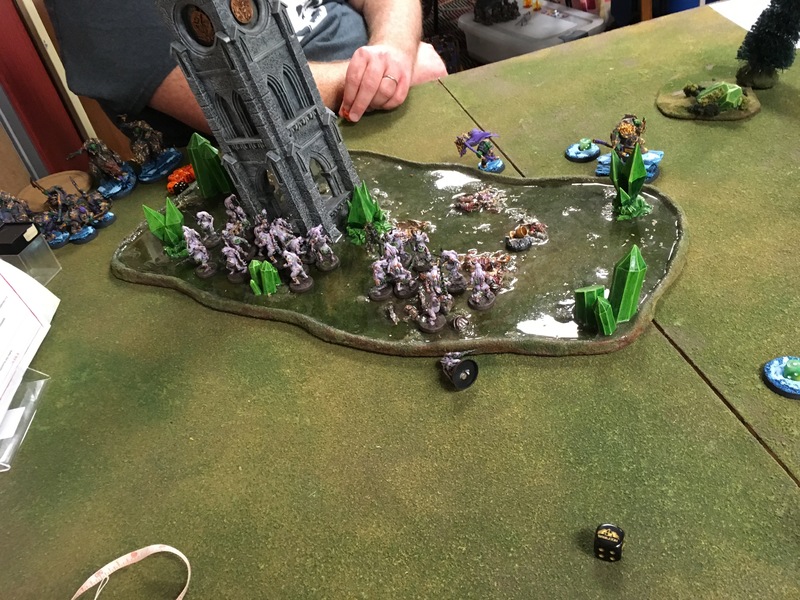 And so the game ended, with me locking down the scenario objective (7), the grail objective (6), and having the most remaining units on the table (3).  Never have I gotten my proverbial teeth kicked in so hard and yet still walked away with the major victory.   It was almost a crime how the score so minimally represented the actual game that was played on the table.

Despite the unfairness of the score on Domus’ behalf, I would experience the flip side of this encounter in my next game against Sean Troy, one of the best players in the Midwest and the other opponent we three-way tied with at Holy Havok.  I’ll cover this game next.