I was fortunate to draw Walter for my Game 2 on Bugman’s Grudge because I was harboring a bit of a grudge against Walter myself.  During Holy Havok this last fall, Vince and I three way tied for Best Overall with Walter’s team and Sean Troy’s team (who I got to play in Game 4; more on this later).  Walter was playing his Ogre’s again, who had handly blown up (well, severely crippled) an unbuffed, 30 strong Chaos Warrior block at the top of turn 1 during our last showdown at Holy Havok.  I was happy to take another shot at his army.

Walter brought 3 blocks of Ogres, a block of Ironguts and a block of Leadbelchers (all in packs of 6), backed by a Butcher, another hero (maybe a second Butcher), and a pair of Ironjawz heroes (Megaboss and Weirdnob Shaman).  Unfortunately for Walter, the main scenario was a model feeder scenario where you threw your model’s into Bugman’s and started drinking.  Every turn, there was a chance your models would pass out and be removed from play.  Units from both players could garrison Bugman’s but they couldn’t attack each other (they were too busy drinking together).  Any enemies near enough to the tavern on the outside could be attacked on the other hand.  The Grail Objective involved sending your troops into the mountains off the starting zone and searching for the Grail token.  The first to find it (5+) would lock it into place atop at their Mountain Entrance and have to hold it in order to accumulate points each turn.

Knowing I had the model count on him, I went with the following list: 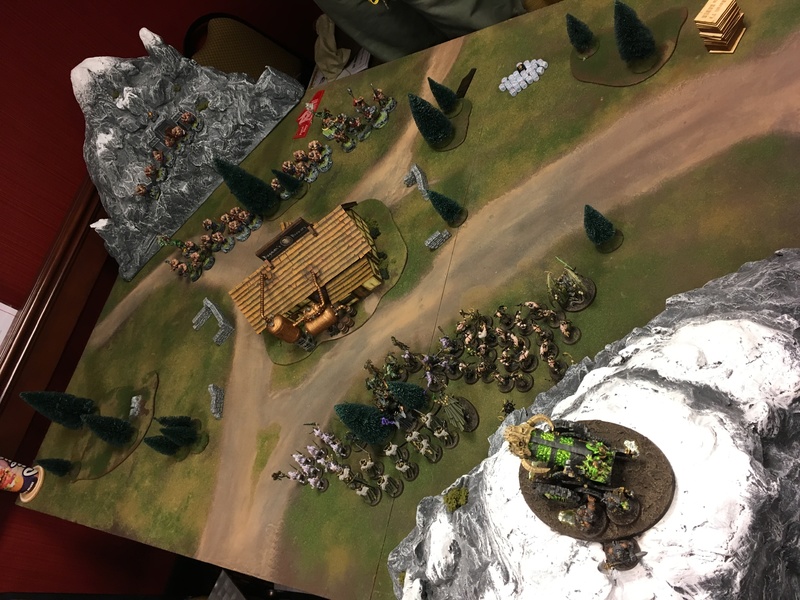 I arrayed my forced defensively around the mountain entrance, and planned on sending the small unit of 10 Chaos Marauders into the mountain looking for the objective.  I knew getting into the tavern was going to be hard because you had to start your movement phase up within 6” of the door and I didn’t have off-turn movement.  I also deployed my Hellcannon on top of the mountain because 1) he was cool with it, 2) it was a legal place to drop, and 3) it looked cinematically awesome.  I double-checked with him to make sure he was cool with it and he encouraged me to do so (knowing full-well he would have the range with the Balewind to shoot my crew off with Arcane Bolt). 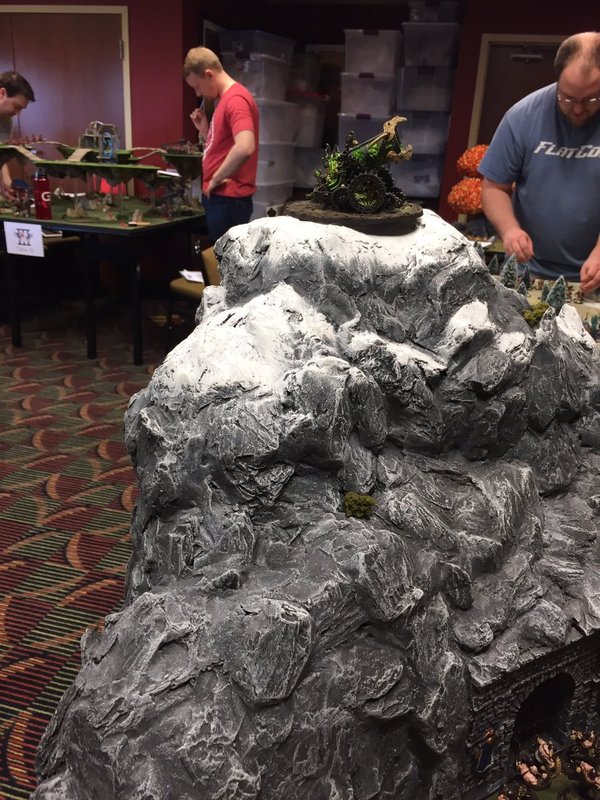 Given what both of us dropped, I was grabbing to grab first turn as he handed off turn one to me, which I gladly obliged.  Rather than waiting to the very end as I had last game, at the top of turn one, I had Sayl 3-dice a summon Plaguebearers and dropped 20 of them on the door (which would allow me to enter during the movement phase of turn 1).  I got lucky and, after entering the Mountain, immediately found the Grail Token on a 5+, which meant that it locked in my starting zone.  The Hellcannon immediately started putting wounds on the Weirdnob shaman, the Plaguebearers went in for a drink (3 passed out immeadiately, woohoo!), and the rest of my line did what they do best, set up a bunker around the Grail Objective. 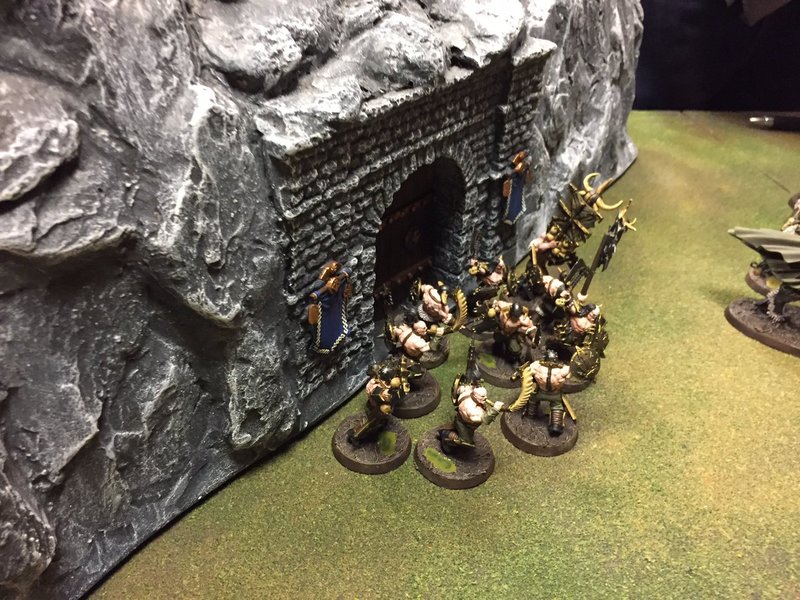 On his turn, he charged forward He moved his Ironguts up to the side (my right) of the building and his Leadbelcher to the opposite side.  The Ogres went straight for the tavern.  His extra destruction move really helped him close this distance.  I had Belakor’d the Weirdnob (knowing the threat the Hellcannon was facing) and it ended up paying off.  He successfully summoned the Balewind on the Weirdnob but Belakor’s Dark Master shut the rest of his casting down in Turn 1.  I was fortunate to make those Plaguebearers immune to Battleshock because Walter’s rebuttal was swift, nearly clearing the tavern of the 20 Plaguebearers at the bottom of turn 1. 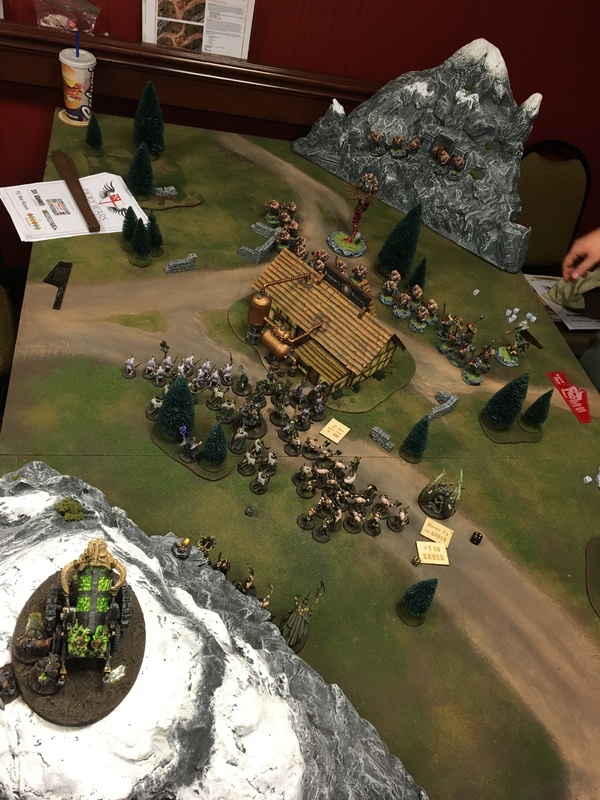 On my turn, my Hellcannon shot down his Weirdnob, and I continued to shift my lines around, preparing for the inevitable bloodbath when he made it to me.  I moved a unit of Blightkings along each tavern flank to meet his two elite units head on, as other units moved up to the door to try get into the tavern.  Even though they had been buffed with Lord of War (+1 to hit, thus exploding hits on 5+), I don’t think either of us was expecting much from the 5 Blightkings against his 6 Ironguts when they rolled up.  Well, that was until Unpredictable Destruction dropped on them, adding another +1 to hit, making their attacks explode on a 4+).  Twenty six confirmed wounds later and his Irongut unit has been cut in half by the lowly Blightkings. 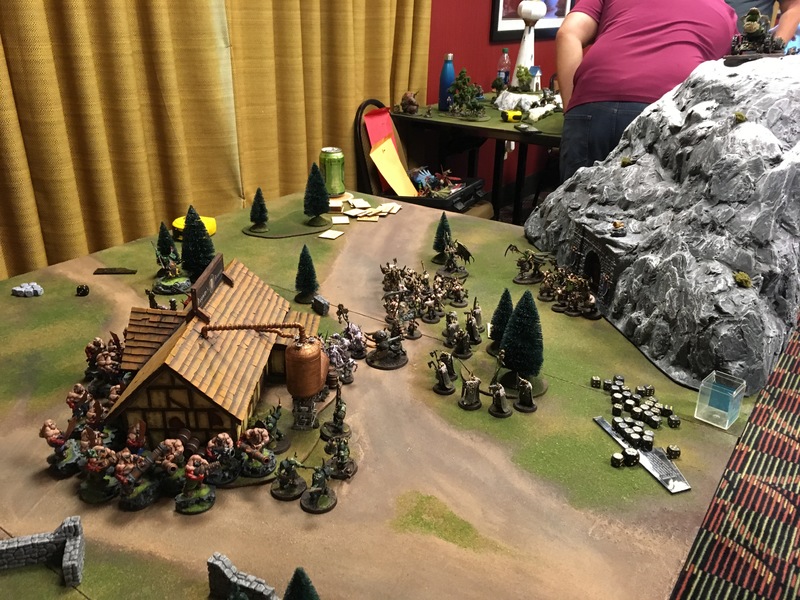 This turn of events was symptomatic of the game as a whole.  Just as the dice fell my way with the Grail Token and the Blightkings, so too would it continue as the turns progressed.  My models continued to pile into the tavern each turn as the two units of five Blightkings went toe to toe with his Leadbelchers and Ironguts.  Even when the Blightkings on the Ironguts were cut down, Belakor moved up on that flank and made short work of the remaining Irongut, as well as the Ironjawz Megaboss that charged in.   Did I mention how good Belakor is?

The reality is that Walter’s Ogres never actually made it to my side of the tavern.  Those in the tavern took heavy hits from the Hellcannon and my adjacent attacking units whittled down the wounds round by round.  When the grind was all said and done, I walked away with a 20 – 0 win, including my secret objective to kill his highest pointed hero or monster.  Despite the big win, it was really the table combined with bad rolling that was to blame for his loss.  He played fantastically given the circumstances.  I look forward to (and dread a little bit) our next game where things will be a little bit more evenly matched.