At the prompting of my Warhammer Weekly cohost, I was grudged for my first game by one of our viewers.  I picked the Endless Desert table because of my love of Tomb Kings, although this was a bad move given Justin’s force.  Justin brought a regenerating ghoul-heavy Ghoul Patrol Flesheater force to a board whose primary objective was shoving the most bodies into an endless pit.  It also had a split deployment and a random placement for the secondary objective, which was a difficult setup for my bubble-wrapped artillery heavy Nurgle infantry force.  Good times.

Despite the uphill battle, I gambled with my placement bunkering into a back corner of the board and planned on sending out Sayl’d infantry blocks into the swirling endless pit of sand while Be’lakor and a token force screened one of his Crypt Horror blocks and three heroes on the far end of the table.  My deployment was: 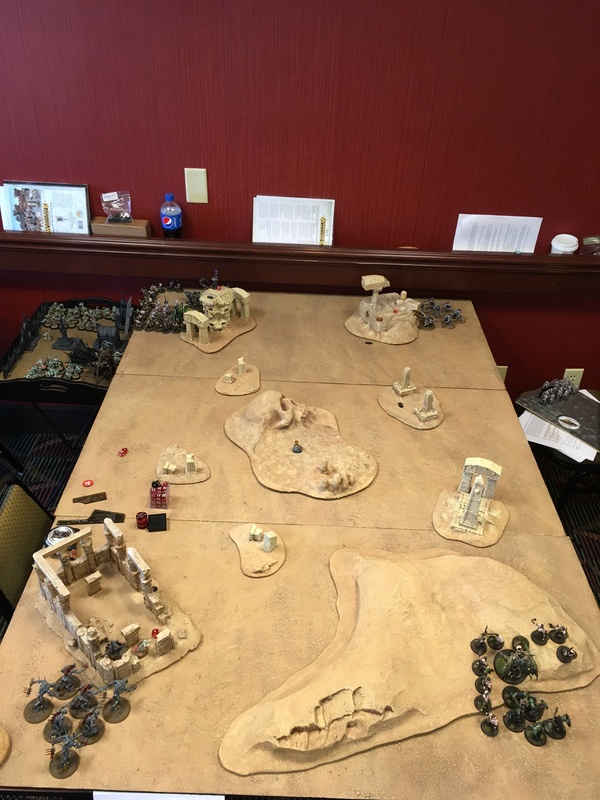 Justin smartly took first turn, with an opening 9” charge, crashed a 30 strong unit of ghouls into my front line of unbuffed and quite surprised marauders.  After suffering some significant casualties I responded by Sayl-ing (face it, it’s a verb now) that block of marauders, which I retreated out of combat and shoved them into the swirling sands at the center, quite surprisingly (to Justin) leaving my artillery sparsely defended.  When a unit touched the sands, a die was rolled for each model.  On a 6, they were removed and scored a point, on 1 they were killed.  Remaining models were set up 9” away from the enemy on a portion of the table based on another roll.   I noticed that rolls of 2 and 5 allowed you to be set up in the panel with the storm, so you could literally reset up again the sandstorm and start the process all over again.  To the surprise of both Justin and myself, I rolled three 2 and/or 5s in a row, so I kept throwing this unit (which I had made battleshock immune) into the sands.  What popped out the other side was me scoring 4 points (from the 12ish marauders I threw in there) and one guy remaining standing.  I charged my 10 Plaguebearers into the gap with the remaining Ghouls and they held firm.

On the other flank of my artillery, my 5 blightkings charged in and blew up a small unit of 10 ghouls while Belakor and his Blightkings moved to intercept the Crypt Horror plus hero pack on the other side of the table.  Be’lakor was able to sit on terrain for this combat, which helped in significantly in the rounds to come. The Hellcannon put some wounds on the enemy Varghulf Courtier general. 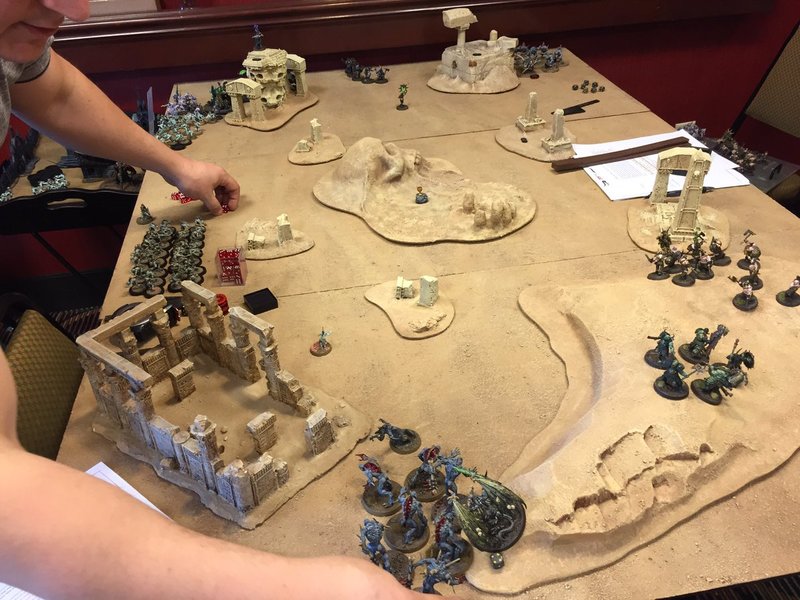 I was able to kill Justin’s general in turn 2 with the Hellcannon, and despite an initial weak showing, Be’lakor was able to lock down the enemy unit on the far end for two more turns of combat, including killing his Crypt Haunter Courtier in single combat (while being swarmed by Crypt Ghouls).  I had Be’lakor’d (also now a verb) his second block of 30 ghouls with Dark Master so that stopped their ability to move towards the swirling sands in turn two.  My plaguebearers plus the nearby Blightkings easily cleared out the 30-ghoul unit near my artillery. 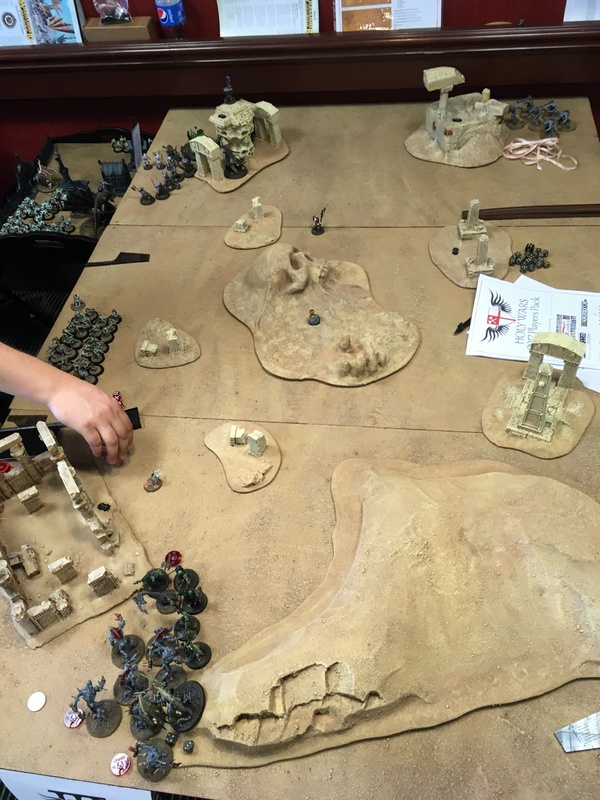 I caught another break when the secondary grail objective dropped in an adjacent portion of the board to my bunker, right on top of his other six Crypt Horror unit.  This provided him incentive to hold his unit on that objective so that the Grail Objective didn’t move to another quadrant.  While the rest of his troops were locked down or trying to get into the sands, I was able to move my remaining infantry forces up towards the objective threatening it about 9” out (while scoring was only 6” out).  Justin had to make a hard decision at this point.  If he stayed on the point, I would simply move up on the objective in the last turn and claim it with more models.  If he went first, he wouldn’t even have the chance of killing any of my troops.  If he charged, he would have to leave the objective bubble itself and risk not scoring it as well.  He made the bold decision to charge forward, try to kill my somewhat sparse force (5 Blightkings, Harbinger of Decay, Mounted Sorcerer Lord, and the one remaining marauder from the prior 20 block). 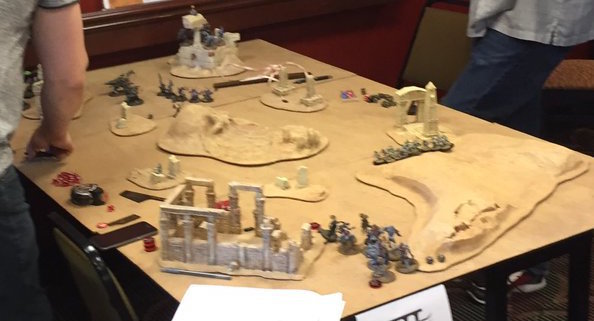 This was of course a trap.  By luring his horrors out, he moved off the point enough so that I was able to have Sayl (who was sitting on Arcane terrain 10” back from this front line) triple-diced a Summon Plaguebearers, dropping 20 Plaguebearers, which conga-lined behind his line and onto the objective.  The remains of his 30 block of Ghouls did drop into that quadrant after entering the sands a second time but it was too little too late to shift the 20 plaguebearers off the point.

It was a hard fought game with him unsurprisingly grabbing the primary objective (7 points) and with myself accomplishing the secondary grail objective (6 points), my secret objective (Killing more heroes than he did, 4 points), and ending the game with more units still deployed than he did (3 points).  Game 2 was against Walter Duncan (who Vince and I three-way tied him and his teammate for best overall at Holy Havok) and his ogres in a drinking contest on Bugman's table.