"The Swords of Ulric, also known as the Sons of Ulric are a Middenland regiment of Templar's and fanatics dedicated and funded by the Ulrican Church of Middenheim. The formidable training of the Swords of Ulric consists not of marches or military drills, but instead on patrols and war parties led out of the city itself and into the hazardous regions of the Drakwald Forest, where they hunt out the tribes of beastmen that have taken residence in the land. Initiates hoping to join this famed regiment must accompany such excursions into the forest; only those that fight with honour (and survive) in the gruesome endeavour shall be admitted into the regiment.

It is left to each soldier to equip himself in the blue and white colours of Middenland, but once he becomes a full member, most of the funding for equipment and supplies are administrated by the Temple of Ulric. Since the regiments founding, in the days when Count Mandred Skavenslayer rallied the Empire behind him and became Emperor, the Sons of Ulric have borne yellow shields into battle, a tradition that still hold true today. Also by tradition, each shield must bear a variation of the same device; a red wolf, signifying Ulric embattled. The grim northerners have little room for formal ceremony, but what they lack in parade-ground discipline, they make up for with uncommon savagery and dedication on the battlefield." - Uniforms and Heraldry of the Empire

The heart of any Free Peoples army is the humble Freeguild Guard.

There is something intrinsically cool about some basic human dude running into battle with little but a sword, shield, floppy hat and scant armor (let alone some without shoes). This is one of the main reasons I love this army, normal humanity fighting against giant daemons, superhuman Chaos tribesmen, ferocious Orcs and the ethereal ranks of the undead. It's all well and good, being a superhuman Stormcast running into battle with god-forged weapons, but when you are Hanz the baker from Middenland with your hand me down panoply of war and facing a Greater Daemon of Slaanesh, things are a little different.

Stats are similar to the Crossbowmen I previously covered: 1 wound each, 5+ save (better than the Crossbow 6+), Bravery 5 and a move of 5". Nothing great. All Freeguild Gaurd with Halberds, Spears and Swords can take Shields.

The Freeguild Guard have a variety of weapons to take, each with their unique traits:

For this blog I will be referring to Swordsmen only, as I believe they are the strongest option here.

These two abilities make Swordsmen the best anvil for your Free Peoples army. In combat they are now a 4+ save re-rolling 1's. Add the Freeguild General on Horse with the Indomitable command trait and that is how a 3+ re-rolling 1's. Taking these guys in a 40 man unit with this kind of save is a serious lump of wounds that your enemy has to deal with.

NOTE: Couple the Parry, Sheilds and Standard Bearer and the +1 bravery for each 10 models in the unit and this makes this unit highly resistant to basic damage and battleshock.

This can make the Freeguild Guard very killy against other horde units they will encounter. A 40+ man unit is hitting on 2+ and wounding on +4. Add a Hold the Line! from the Freeguild General on Horse and/or a Wildform spell from an Amber Battlemage and you are looking at 2_+hit, 2+ wound on 40 attacks. Couple this with a Knight-Azyros (Re-rolling 1's to hit) nearby and you have some scary Freeguild Guard just through highly reliable weight of attacks. 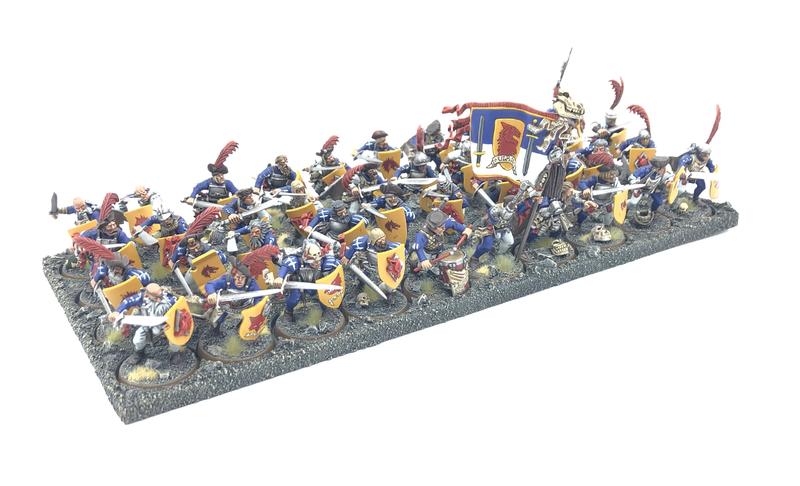 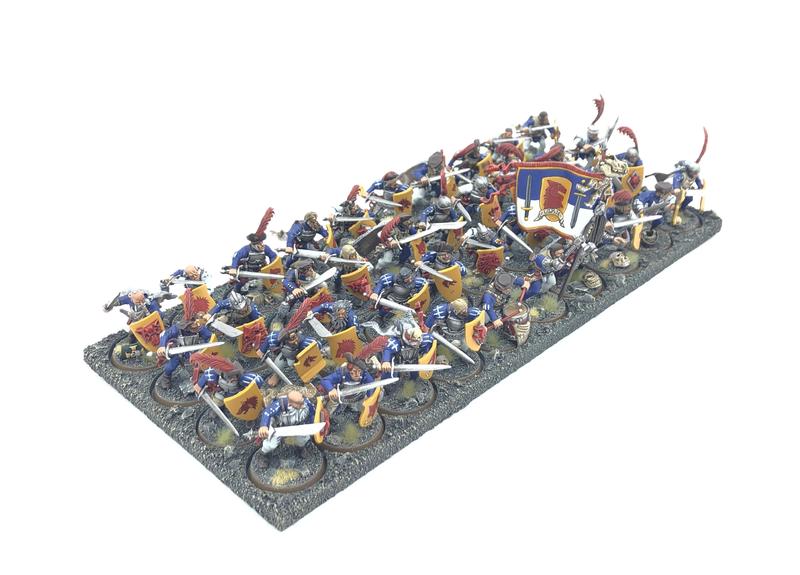 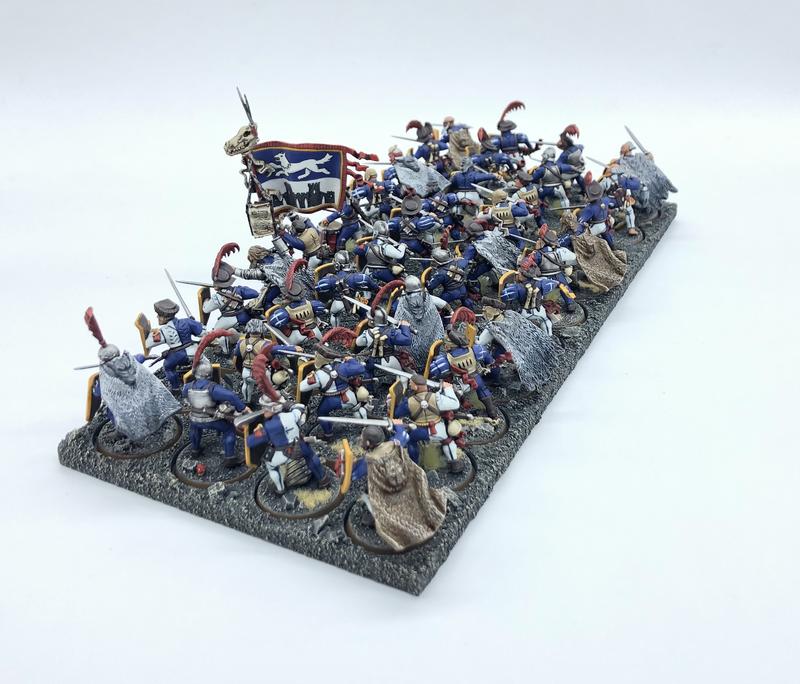 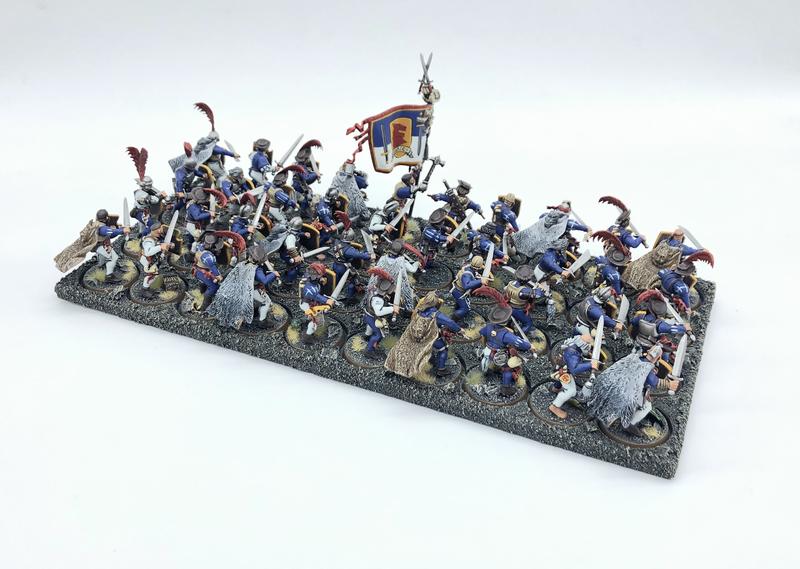 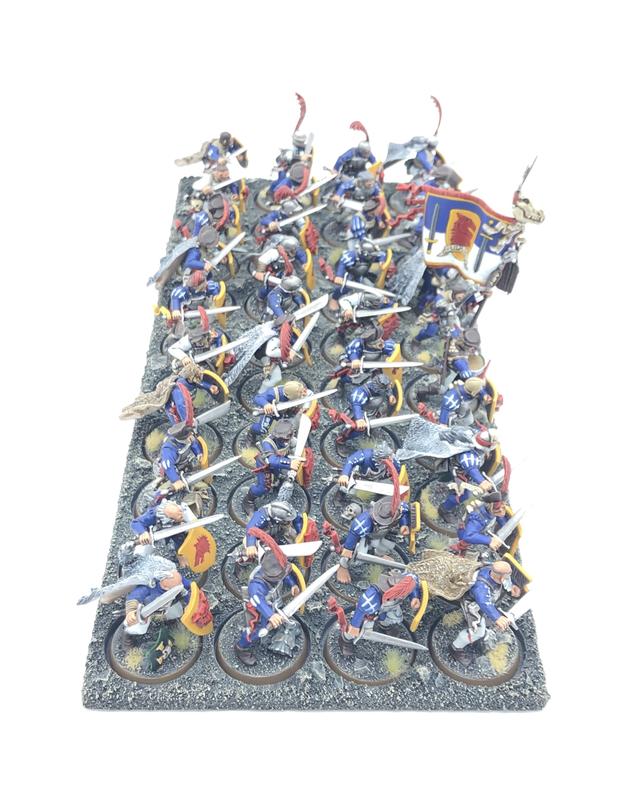 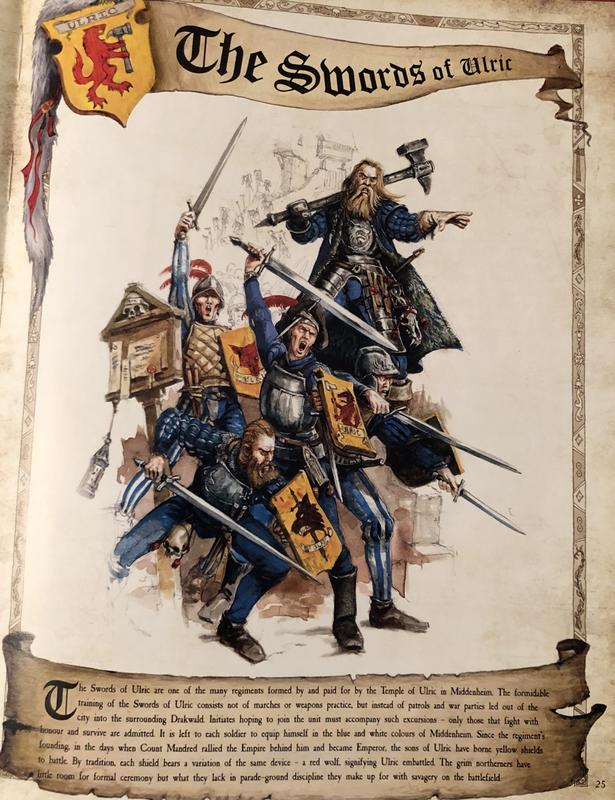