So I’ve been painting minis for over thirty years now, and I think I’m finally getting the hang of it. At the very least, it’s a hobby that helps me achieve some level of zen meditation, a way to block out the real world for a little while.  Not that the real world’s terrible, or at least my little corner of it, but it’s always a nice break to escape to the realm of Sigmar for a fantasy recharge.

I’ve loved GW’s versions of the dark elves since Trish and Aly Morrison broke off from GW to form Marauder Miniatures. They were a couple of the original GW sculptors, who also share the ignominy of sculpting the original Nagash. Well, everyone has at least one skeleton in their closet to hide...

As I was saying, they made the first complete, fleshed-out line of delves, complete with some really characterful mastiffs. If anyone is familiar with the Dakka site, that’s where I picked my “Mastiff” moniker from, when I’d post my 40k projects.

Anywho... I always have had a soft spot for the delves. Surprisingly, I’ve never picked up a single Drizz’t novel, nor read any Malus Darkblade. But I’ve always gravitated to bad guys with a sense of style (team Empire over Rebellion all the way!) and these guys had it in spades.

Unfortunately, my painting productivity is best described as “glacial”, so  completing the hundreds of figures required by a WH Fantasy army was itself a fantasy, so I stuck to 40k.

I still held out for a while, not wanting to get involved until they had point values for armies. I kinda assumed they wanted to kick around the rules for a while before committing to figuring out relative costs. In any case, when they finally released the  “proper” game with pts, I dug up my half-completed delf units to see what could be turned into an army.

Congrats on reading this far, thanks! Here, have some photos of my Dark Elf army, which has been put on hold since the Daughters of Khaine finally gave me a fun and competitive army to play: 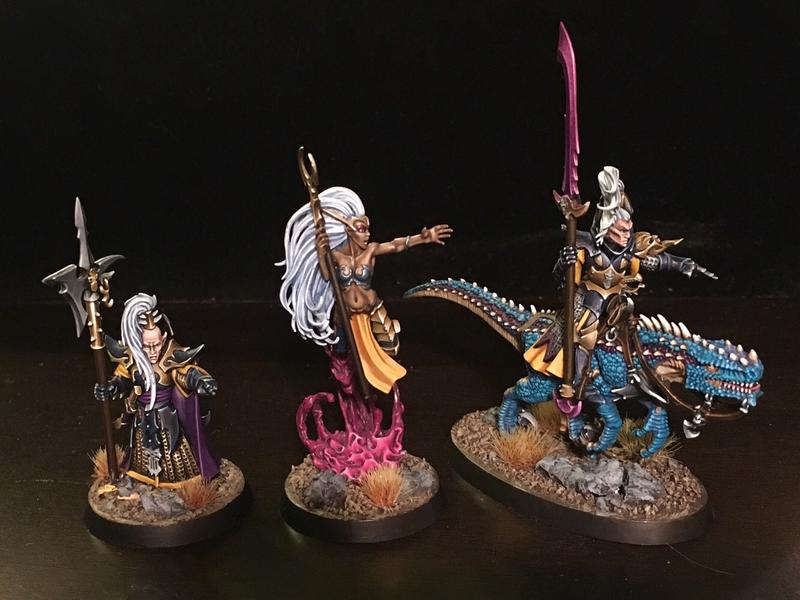 Damn, GeeDub really made some amazing models for the delves. Really hoping they revisit them some day, I’d love to field corsairs and cold one knights again, and not just as allies.

In my next post, I’ll start talking about my Daughters of Khaine and post WIPs, which is what the blog is intending to cover.