Anyone who read my battle summary would have seen that tragically the Exalted Volsungr got a bit beaten up by a Griffon and a Chariot, tragic ofcourse but it does beg the question what happens when an immortal warrior of the Suneater is felled in battle?  Can such a creature ever really die? What role does the Gothi accompanying them play in such a situation and how exactly are they "healed" if the can be?

Well here's how, part two of the battle summary, Rebuilding a God as the now mountless Gothi seeks to rectify what went wrong:

“Stupid Aelves….” His voice shrill with irritation as his thin wrinkled lips curling back to revel a rack of yellowed yet wickedly sharp teeth as he spat into the dirt “Stupid skin and bone Aelfkin, broke him they did…” Irritated, old and wizened yet remarkably fat for his kin the Gothi priest balled his fists and slammed one into his rocky mount, a piercing scream of agony punctuating the idiocy of such a move for a frail and feeble creature to undertake. Worse yet as realisation overtook him the priests began to caress the rock, murmuring softly back to it “But we’ll fix him up, feed him up food, feed him on the Aelves and their pathetic little souls and yes….”. Within a moment all trace of softness vanished from his voice “FASTER! HE’S HUUUUUUNGRY!” he barked forward to the scarred and blistered backs of two Ogors in front of him, swaying with every step of their rippling scaled mounts, the stench of the pair was almost unbearable, a putrid combination of the muds of this rain sodden field combined with Ogor sweat and the unmistakable odours of faeces made the frustrated priest miss the isolation and dry cracked earth of his former refuge. He could not tell if the response came from Ogor or Draken, but it sounded enough like an irritated huff of compliance to assure the old Gothi of compliance, turning his attention back to the boulderous skull of his former master and mount he was sat upon, great chains wrapped around its mighty horns to drag it behind the giant Draken mounts of the Aldin bodyguard.

There was little by way of conversation as the two mounted Ogors dragged their precious cargo up the hill toward the sweltering heat and night piercing glow of the great pyre, it afforded the Gothi time to nail down precisely what had gone wrong in the battle. They had been sent ahead of the great migration of the Burnin Klaw, Great Prophet Fyrebite had demanded it of course… why would someone chosen by the gods ask when he could demand after all. They were to forge the path to the Maw Gates whilst the rest of the migration gathered slaves to sustain them on the long haul back to Aqshy and the blistering heats of home. This land was meant to be the quite place, once fortress to the puny fanatics of the pretender god Khorne and their pathetic little rituals, the very thought brought a furrowing of the brow and yet more spitting of distain from the Gothi priest. Those pretenders had taken the land from the fool-man Sigmars pets, and before them it was the wildlands… now it was to be the Scorch, one finger of the mighty fist of the Suneater as he pummelled this realm into submission. But this quiet place wasn’t good quiet… no it was Aelf quiet, the quiet that bites on the wind and runs like a coward, the quiet that isn’t a good fight but like rats in the night. Stupid raingod thought he could quench the great Pyres of the Suneater, but the Suneater pummelled raingod and the Pyres rose high, puny Aelves thought they could stick the Gothi good with their beelike arrows stinging all round but the Gothi were too smart, hiding behind Ogorkin whose big backs could take many arrows and small brains might not feel them. Stick bird thing though… stick bird pecked at the mighty Gor-da, Exalted Prophet of the tribe, mighty Gor-da who had shaken whole realms and walked as mountain of flame and stone, Gor-da who now was just a dull rock starving slowly in the night… stupid Stick-bird broke him good.

“Bring it!” the Gothi priests shrill cry pierced the night once more as his two escorts unceremoniously dumped their chains into the dirt by the pyre, only the thick mud of the hill stopping the great stone skull from rolling back down to its starting point once more. The maniacal laughter of his attendants at least brought a shifting evil grin to the older gothis face, each shuffling into view from behind to glow of the pyre with a barbed chain lashed around the face of a bruised and beaten Aelf. Every tug of the chains elicited a pained yelp from their captive, much to the riotous laughter of his jailors, inch by inch forcing their new toy closer to the giant skull.

“Make it kneeeeeell!” he cried into the night, an attendant delivering a bone crunching wallop to the feeble boned Aelf to drop it to its knees. Even the laughter of the attendants died out at the Gothi raised his hands to the nights sky, the beasts of Ghur falling silent in anticipation. The older Gothi begun to utter guttural prayers, low… rumbling noises of the volcanic wastelands he had for so long called home, his hands arching and curling through the air as bony pale fingers beckoned to the great pyre before him. Serpentine the flames leapt higher, leaping and twisting as they moved toward their summoner, at times they reeled back as though some wild beast resisting the will of their master but each time he called out shrill into the night and they came back to compliance. Each tendril wrapped around the broken Aelf, at first inching around limbs, the smell of singed Aelf flesh sweet in the night sky, the flames rose through the Aelven form as though through dried wood, wreathing the creatures whole form into flame.

The priests prayers reached a climax, now so shrill they’d passed beyond the hearing of most mortal creatures, his fingers outstretched toward the burning Aelfs form he balled up fists and slammed them once more down into the Rocks skull that formed his stage. With this final movement the flames leapt from Aelf, burning into the eyes of the stone-hewn mask, the roar of the Volcano punctuating the rituals completion with great gouts of flame emanating from eyes and mouth of the fallen Idol of the Suneaters. The spark once more lit the Gothi caressed his fallen masters skull, beady eyes staring out into the crowd of gathered Ogors and Grots “More Aelves… He’s hungry… and bring rocks... big rocks.” 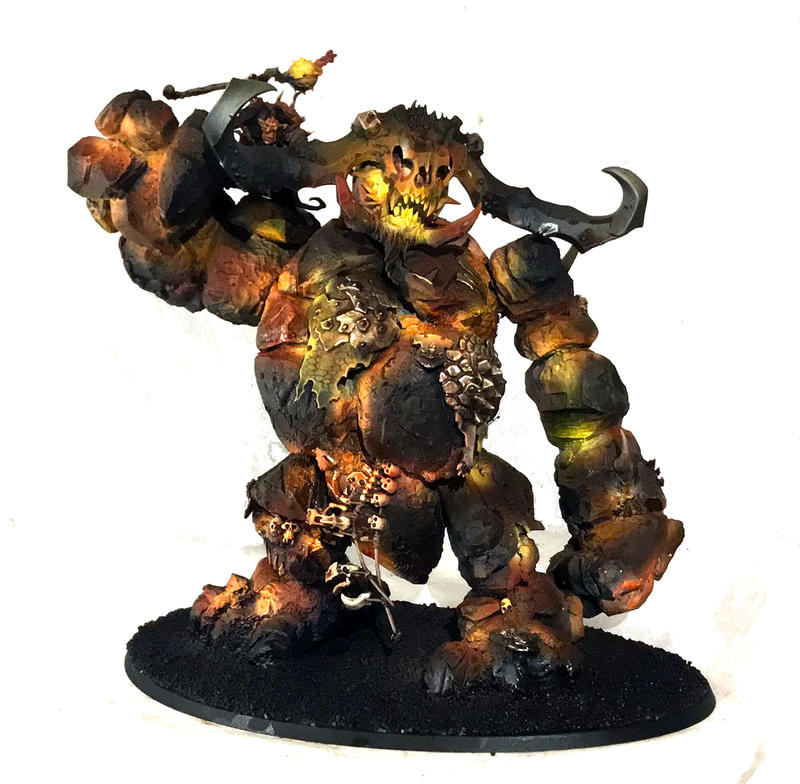