Work in progress for the emergence of the first Suneaters Named Character, the first champion and prophet who drank deep from the lifes blood of Vulcatrix, the founder of the Suneater Tribes and true son of the Suneater.

The First Prophet disappeared from the tribes millennia ago, stories circulate around his exact reasons why but no Ogor could truly speak to what filled the mind of such a mighty champion of the Suneater. Most assumed he marched forth to the first Pyre, much in the same way the other ancient prophets have done that they might prepare for the final battle at the side of their mighty God, though none returning from the Pyre speak of the First Prophet. In truth his rampage outgrew even the mighty tribes of the Suneaters, he was stronger and faster than any of his kin, his hunger for battle outlasted any of the savage soldiers who fought at his side, he could march for days when lesser mortals had to stop to rest. One by one his migration fell out of step with the great Prophet, they were left to wage war in his wake and decimate those civilizations too small to face the wrath of the mighty one.

It was an alliance of Aelves and Sylvaneth who stunted this rampage, though the battle waged long into the winter seasons it was as the weather began to grow cold and the great flames of his forms waged war with the icy elements that the alliance of Order began to gain the upper hand. Grew flocks of the frostheart Phoenix flew high above the Magma drenched gargant, a swirling tempest of lashing ice and snow caged him in. Great war beasts of the Aelven empire dragged mighty chains forth, raised high by the Arcane powers of their masters to lock onto the rampaging Prophets limbs, inch by inch his volatile form was dragged forth, his feet digging deep into the battle worn fields as he lashed out at his would-be captors with massive blows of his flame wreathed weaponry.

It was with a final roar of contempt that the Prophet was pulled from the field of battle, sent tumbling down into a darkened chasm with even the brilliant light of his form disappearing into the darkness of the depths. Yet the Aelven empires knew that such a creature could not truly be killed by such trivial means, at best they could cage him until a weapon could be forged to slay the great beast, and for this their greatest sorcerers set to work shaping the very landscape around them to become a cage hewn from nature. Three great rivers were rerouted through the realm, the dirt roiling upwards and great tracts carved through the hillside, sending their murky waters tumbling into the great chasm to quench the flames of the Prophets rage, hissing gouts of steam spitting upwards into the skies above. Time has long since forgotten the battle, and the prisoner since caged, pilgrims even starting to reverse the geyser of Ghyran as a holy site of Alarielle interpreting its hissing as divinations of their gods will. And with ages these volatile days became something of myth, eventually lost to history in the Age of Chaos as all things are in the death of civilisations.

Hidden at the foot of the Arboreal Mountains in Ghyran lay the nameless city, its new denizens dubbed it the Phoenicium and so content were they in their own victory in liberating this ancient stonehewn marvel that they asked not what it had been called before, nor why its echoing halls bore the arcane symbols of magics long since lost. In the years since the War for Ghyran and the liberation of the Phoenicium the architects of Azyr are still finding new marvels lurking within the expansive labyrinth that runs beneath the mountainrange, their arcane historians tracing back runes and wardings to some of the oldest civilizations in the realms all focusing power throughout the complex as though a lightning rod to the very heart of Ghyran.

Yet still they have not found the chamber of whispering, long since hidden from the prying eyes from mortals yet the voices within carry out into the echoing tunnels that form the Labyrinth. In the dead of night the young say they can hear the soft murmurings of lost voices, as though a lullaby reverberating through the stone itself, at once echoeing from every wall and none at all. This hidden chamber lay within the very heart of the city, no windows or doors piercing its marble walls, there was afterall no surface untouched by the wardings erected by its architects, the height of the chamber seemingly pierces high into the mountaintops, no ceiling visible to the naked eye and no light able to pierce such lingering darkness.

At the heart of this rounded chamber lay the Altar, a roaring flame hovering above ground level, shifting and warping as though tugging at some invisible bonds that refuse to release their grasp. Around it three Oracles kneel in constant prayer in flowing waters of the restorative fount of Ghyran, their ancient skin showing no sign of age beyond a few decades though their eyes, blinded to the physical world, seem yet to carry wisdom that kings would never truly achieve. Here they have remained, their ward and duty demanding their every attention since the inception of this great work, it was the oracles who ensured neither man nor aelf would pierce the great stone walls of the Nameless city in the age of chaos, it was they who ensured the cage would not be broken by mortal hands.

Each oracle courses and sways as though the very rivers of Ghyran themselves, the waters around them raising and falling with every motion, rushing toward the altar in crashing waves before receeding to the very edges of the chamber, their lips moving in constant prayer, soft lullabies seemingly to soothe the restless flame thatlurks at the chambers heart. Here they would have remained undeterred till realms end... but Nagash's great work was ignorant to their very existance let alone their purpose, he did not think of the repercussions when he sent his wave of malicious energies coursing through every vein in the realms. most villages merely felt the briefest of tremor, soon forgotten with the arrival of the restless dead urging more to join the ranks. The Whispering Chamber however, this great conduit of arcane power to the very heart of Ghyran was shaken by the convergence, even ignorant to the chambers existance the populace of the Phoenicium felt as every stone heaved and twisted in the impact of volatile magics, within the chamber itself the oracles screamed out as one in piercing agony, their heads flung back and sightless eyes burning bright with the same radiance as the flame, all water in the chamber bucking and recoiling from the flame as the oracles were riddled with torment.

Nagashes powers flooded the chamber, rising through the arcane sigils across the walls, every inch it crawled higher fresh fissures began to form within the ancient marbling of the chamber, ageless symbols broken unable to contain the shockwave of magic that had been unleashed upon the realms. One by one the Oracles slumped forward, the heat of their body sending great clouds of steam racing skyward as the waters of Ghyran evaporated, tendrils of the flame inching their now lifeless forms toward the rooms central altar.

Deep within the lost forests of Ghyran there is more worrisome news, the water levels of three rivers that forged a winding path through the hills of the Realm have dropped, with every passing day less water reaches the chasmic prison of the Prophet. And those Pilgrims who visit the site no longer hear the whispers of Alarielle from the Geyser, instead they speak of a roar of endless rage and the clanging of chains... 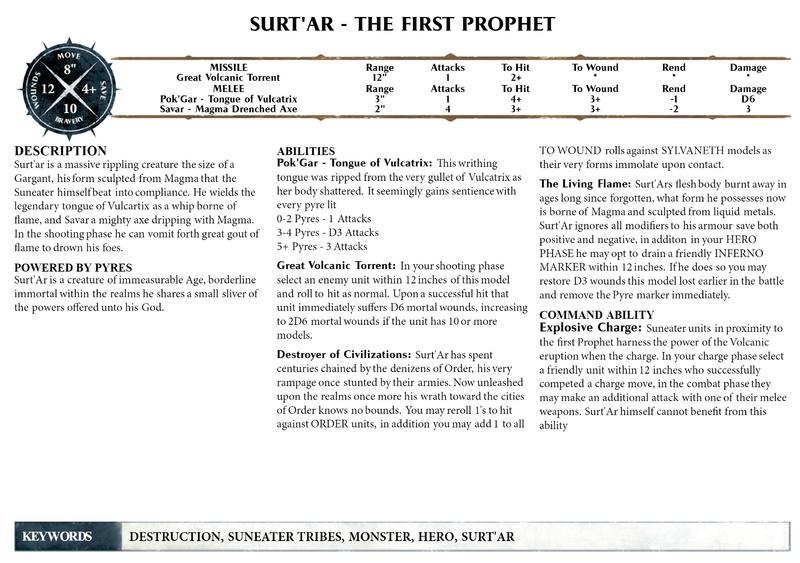 Contemplating giving him the DAEMON keyword as he is now technically an incorporeal living Avatar of a Gods will, in that regard he does match up pretty well with what it would take to be a Daemon (And a daemon of destruction would be a nice first)