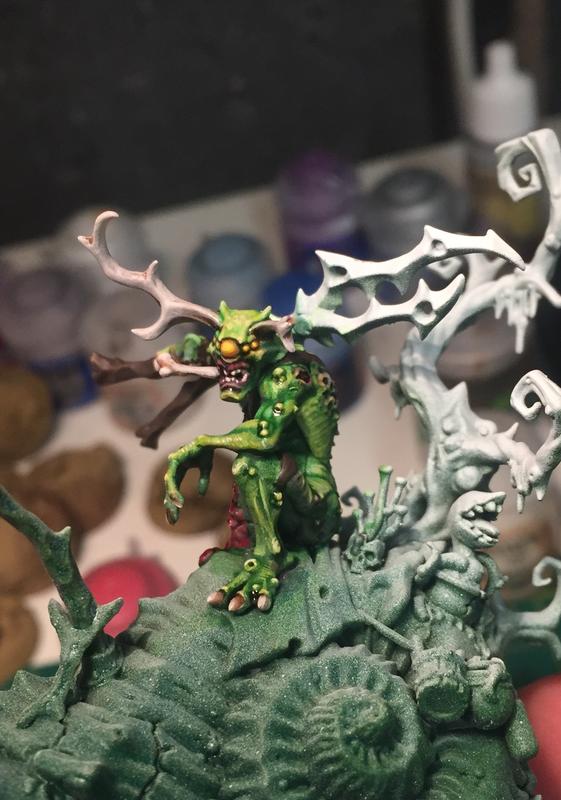 I built Horticulux Slimux as soon as I got the Blight War box when it was released, but he's been undercoated and sat on the painting desk since then. However with the release of the excellent Maggotkin battletome I decided he should be the next model (no.31) in my painting challenge. I have to say that he has been fun to paint so far, but I have also spent more time on him than I expected to. I started off working on Horticulux himself. Normally I'd go for a dark green as he is supposed to be an old plague bearer, but I knew that I was going to paint Mulch quite dark so he needed to be a bit brighter to stand out. I used a base coat of Ogryn Camo for the highlights along with Palyd Wych Flesh. Once id done all the highlights I glazed the whole model with Waywatcher Green and then Lamentors Yellow which gives a really vibrant bright green. Because I'd done the zenithal prime I had a lot of the darker areas already done so I could just glaze and shade over these sections with dark green and purple glazes to get some depth into the recesses. Once I'd finished the skin I went in and quickly picked out the details on the bone, wood and the eyes (I left the pupils out as the GW one looks a bit bonkers with the pupil!) 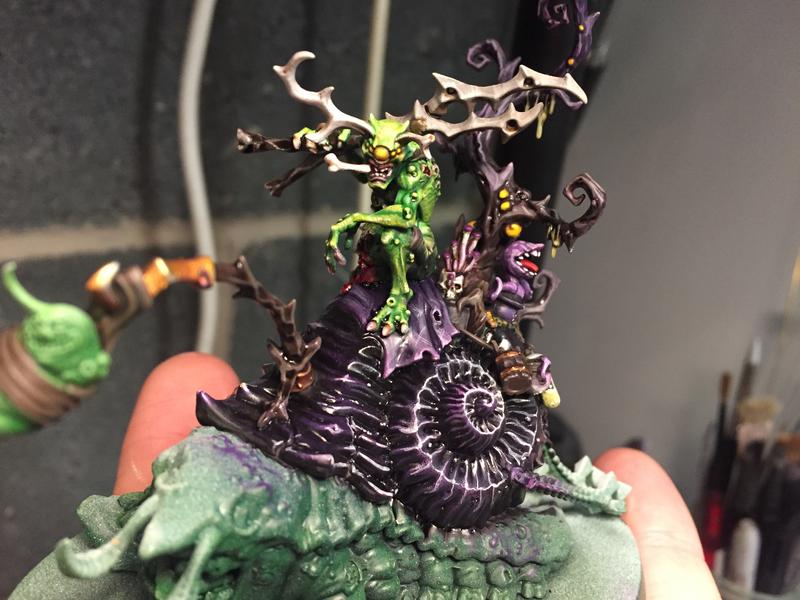 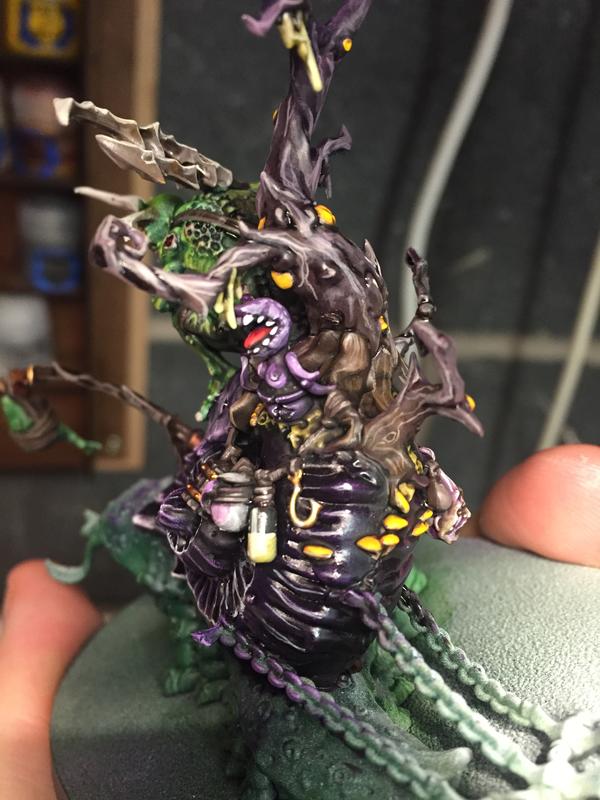 Once i'd finished the rider I started working around him with the rest of the details. One of the things that its important to be aware of on this model is that there are a lot of different elements, and it would be easy to get carried away and have everything painted in lots of colours. What I tried to do was keep the pallet of colours limited, but that then makes it hard to  get variation unless you vary the tone of the colours. I also wanted to play around with the finishes. I started with the shell which is a very dark purple that I made from black and Naggaroth nightshade. I then dry brushed up the details with straight Naggaroth and then added in some Palyd Which Flesh (PWF). once it was dry I could highlight the extreme points with PWF and then covered it with And Coat to get a shiny reflective effect. On the tree I worked purple into the brown so that it would tie in with the overall scheme as well.

That just left all the details around the tree (there are a lot!)

All of these were either yellow (to match the eyes), purples or greens. The only bit I'm not sure with at the moment is the tongue in Audrey2 - the red may need to be glazed with more purple, or maybe repainted green.

I'll hopefully finish the painting this weekend, and I still need to add a base... 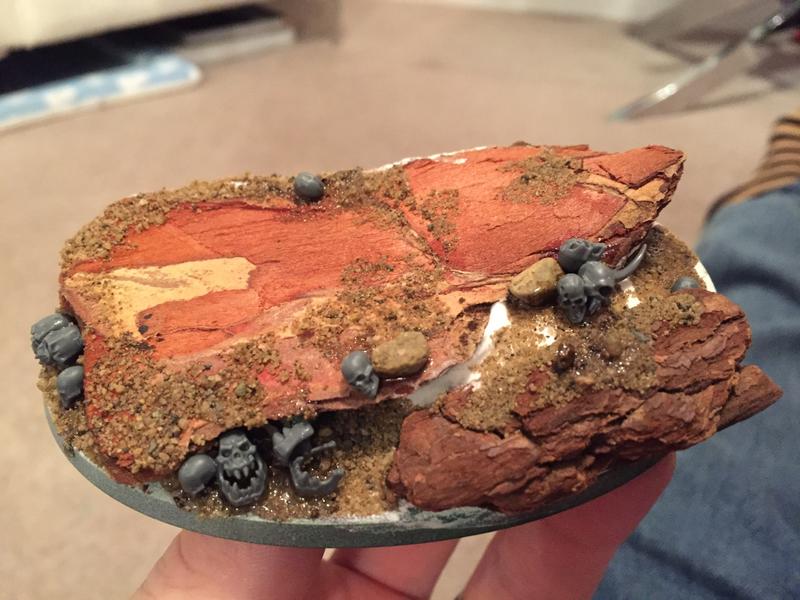 Speaking of which I managed to make a start on this tonight. I had a large piece of play bark which I was going to use, but the curve on either side were too extreme for the model to fit on - Mulch is quite wide and has a very flat base. So i grabbed a saw and cut the piece in half so that I would have a large flat surface to position the model on. I superglued this onto the base and then added filler and a second piece. Once this was dry I sanded the base in sections and then left it in the drying cupboard for a few hours. Once the PVA had set I then superglued a selection of skulls under the lips of the rock to. I'm not sure what to do around the area where the plough will go. I think the plan might be to have natural vegetation and tufts towards the front of the base and then some more natural aquarium plants at the back where he has been plowing the earth. I also think that there could be some space for a fe Nurglings to go on the base in a few areas if I decide I have the time. 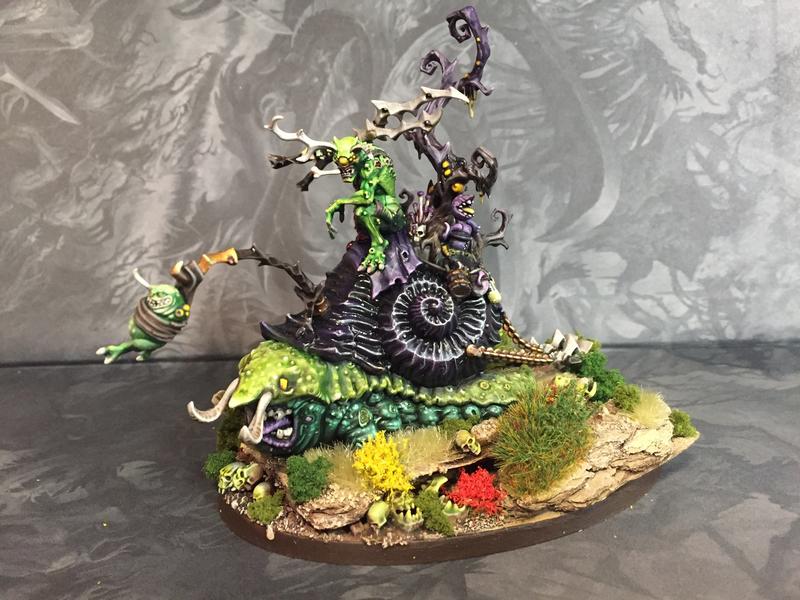 I had time the other evening to finish the model off. To keep the scheme going I used the same light green on the top half of Mulch. I did this fairly quickly using dry brushing and a bunch of washes. Once this was all dry I was able to go in and add some mottling to the skin. I then glazed in the green and yellow to get the bright green look. The bottom half was done in Kabalite Green, which I washed down with a lot of blacks and green shades. I picked out a few of the muscles quickly and then mottled the skin again. I like this technique because you can focus the patterns on the raised areas and it works as a highlight that draws in the eye. I then picked out the details of the mouth which was a fun job.

The base was painted separately. I sprayed it Rhinox Hide and Zandri Dust, then picked out the skulls. The whole thing then got drydrushed with Terminatus Stone before I picked out all the skull highlights. I then glazed these with some greens to tie it all together. I then applied all the tufts and grasses around the base to blend the whole model together.

Its been a fun model to paint and I hope you've enjoyed the write up. 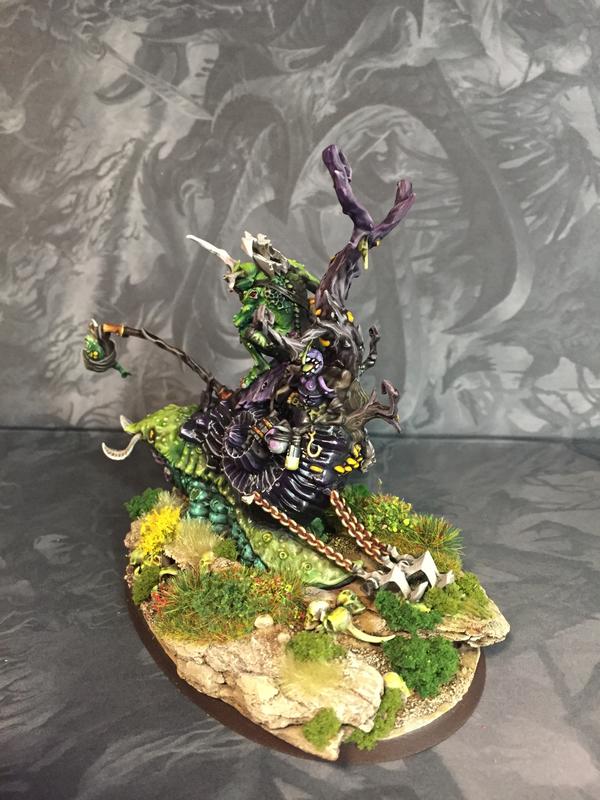 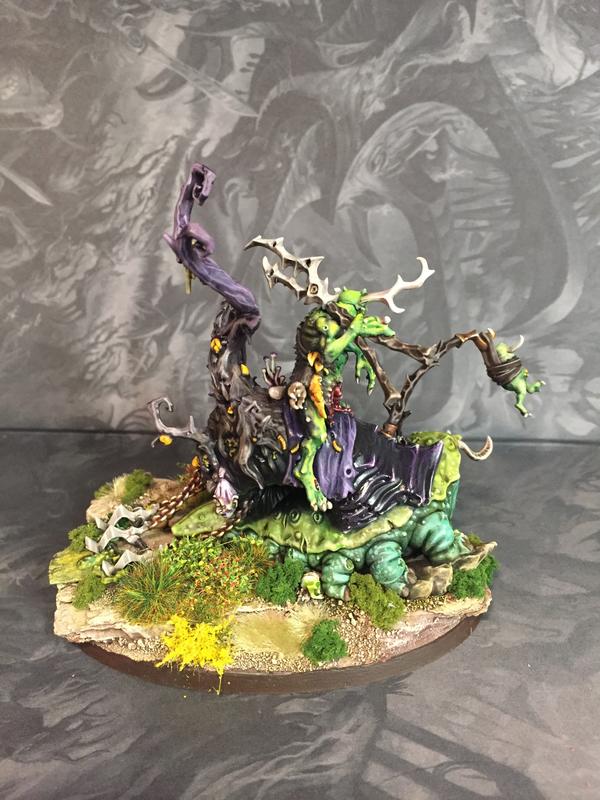 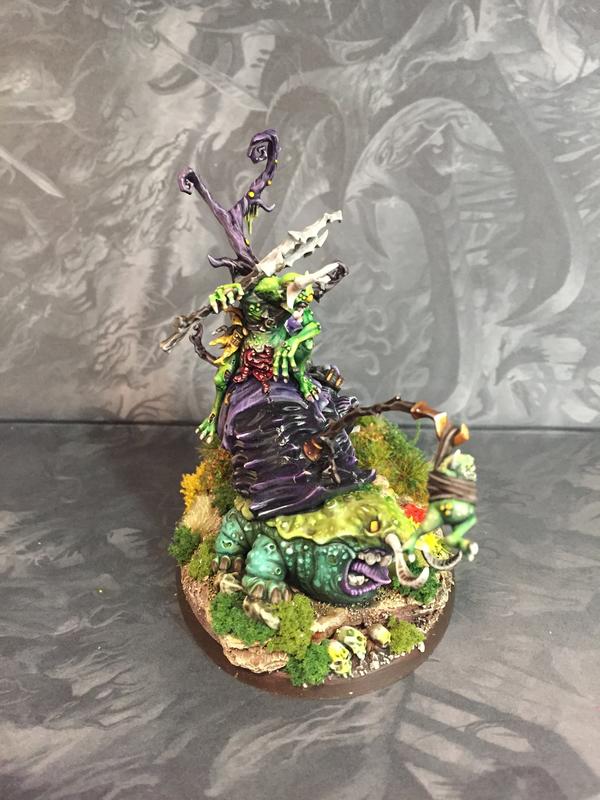