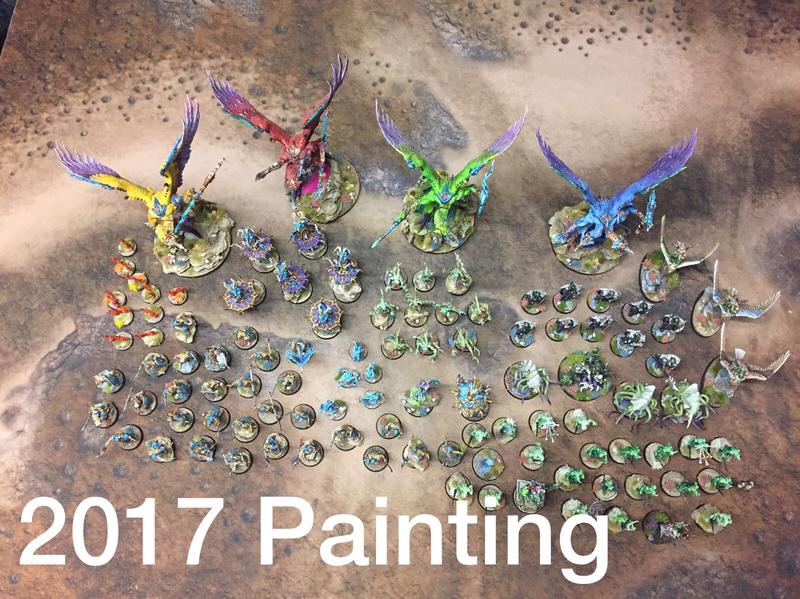 This is a photo of all the models that I painted in 2017:

The year got off to a solid start with the Tzeentch release. At the start of the year I didn't own any Tzeentch models at all, but I was looking for a new project for the South Coast GT and I was fortunate to get some of the Acolytes to work on. I painted 20 of these, and I have another 20 that are partially done. The kit is great though, so I used them to as the base for 20 Maruders. I fleshed out the army with 6 sky fires, a Tzangor Shaman and 4 Lords of Change. This took me up to March, and it meant I had another 2000pt army completed to add to my collection. one of my goals for 2018 will be to add to this army. I'd like to run some more horrors and also have a unit or two of Enlightened on Disc to go in for a more fighty force. Later on on 2017 I started on this and have added 10 Brimstone horrors so far, as well as a unit of Blue and Pink Horrors. I also got a Gaunt Summoner which I spent a bit of time working on - I'm extremely pleased with how he came out.

I spent some time painting a few Nurgle models as well. These were mostly converted for an army project that I started but never finished. However it looks like the start of 2018 will give me some exciting new editions to go into this force. If the new Battletome is competitive then I may try to paint up and actual net list of Nurgle, but if it isn't then I can have some fun adding models as and when. in 2017 I have done 20 Plaguebearers, 10 Warriors, 3 Beasts of Nurgle, a Lord of Plagues, a converted Harbinger of Decay and Festus. I was a little frivolous with my spending this year so I have the remains of the Blightwar box that I can add to this force along with any new models from the upcoming release.

And finally, and some what randomly, there are three warhawk riders that I had sitting around for ages. I have a large Woodelf collection and I have a lot of older or unfinished models that I really want to add in and rebase, so I like to do a few of these as little projects throughout the year. The first of these for 2018 will hopefully be the Sisters of the Thorn. I have the steeds completed for these ladies, but the riders have been in an unfinished pile for over a year now. I think they have deserved to be moved  up the painting queue.

And of course I also did an awful lot of terrain this year. Preparing for Blood and Glory was very stressful and at times I was really down about the whole thing, but the tables and terrain I managed to complete looked spectacular. I'm not going to put the photos here as they can be found littered throughout the blog, but that was a good 4 months of hard labour and I now have 9 high quality sets of table terrain that I can pull out when friends come over as well as having it ready for next years events. Maybe I can add another table or two if I feel motivated...

Overall I am pretty pleased with the amount of hobby that I got done this year. Lets hope next year will be just as productive. I'd love to see how everyone else thinks they have done so pop onto the 2017 retrospective thread here and/or start thinking what your 2018 goals could be and post them too.

Have a terrific 2018 everyone!