Introduction to The Blog

Hey all, Aiden here. Might maybe remember my blog last year on Skaven Pestilens where I churned out article after article on the army before the Skaventide update at the start of this year. Wasn't really my thing so I started focusing on my Slaanesh. Then they got updated and I didn't like playing "OP" and went looking for something that I could enjoy but would reward good gameplay knowledge without making me feel like the army was doing all the work for me.

When Nighthaunt dropped at the start of "Age of Sigmar 2" I was relatively apathetic to them. I thought their design aesthetic was fantastic, but straight out the gate they weren't considered particularly good and the level of exposure they had short of the odd niche win was merely their best units being cherry-picked into Legions of Nagash and seeing the Legion of Sacrament to horrendous dominance with 60 Grimghast Reapers (Punitive measures were taken against this eventually by nerfing Reapers, which only hurt generic Nighthaunt even more) which didn't look overly fun to me, so I forgot about them.

When Forbidden Power was announced however, I saw that it would feature rules for Defenders of Lethis (literally who) and the Legion of Grief. As i thought Legions of Nagash was a pretty well put together book customization-wise i was immediately interested and picked up a copy of Soul Wars as well as a big haul of Nighthaunt models to get me off the ground. 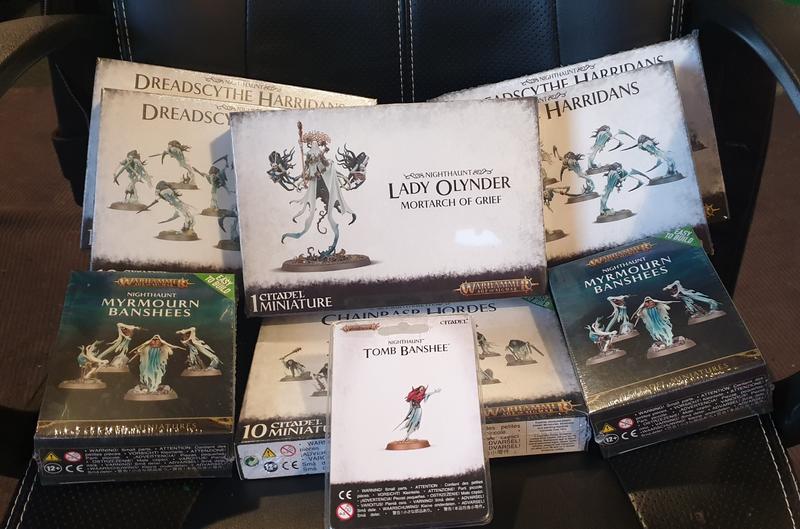 Wanting to play into the theme of it being Olynder's legion, I purchased her as well as other models that played into her aesthetic. I would quickly discover that ironically including Lady Olynder in a Legion of Grief list massively hamstrings it's effectiveness, but trial and error are vital. With a tournament (Sigmar at Winterdale Tavern) exactly one month away from this 2000pts of models arriving I thought well alright, let's see if I can pull this one off.

Over the course of the month I played numerous trial games with different lists, trying out both Nighthaunt and Legions of Grief to see what suited me better. I found Nighthaunt to be a little inconsistent and the battalion I had chosen (Shrieker Host) to be largely too situational to be worth it's cost and thus committed to Grief. When I discovered that the idea of Grief wasn't actually to be scary and ****** with battleshock, but is in fact to settle down, build a farm and raise a nice crop of Command Points Olynder was promptly dropped from the list to allow a non-named character to step in and take the trait Vassal of the Craven King (it's Aetherquartz Broach, but a trait) and another character to take the Aetherquartz Broach (it's Vassal of the Crave.. you get the point). It was all coming together.

The army was painted in time and we made it to the Winterdale Tavern (https://www.winterdaletavern.co.nz/) for the event. It was a one dayer designed to expose the venue to the AoS community and the event did not disappoint. Not often the TO does a Mitre 10/Bunnings style Sausage Sizzle immediately after round 1 for the attendees. My results were 2 wins and 1 loss, the loss is pictured above where I was unable to deal with four Vampire Lords on Zombie Dragons (piloted by NZ #1 two years running Matt Britton) quickly enough to seize victory. The army performed above my expectations, and simply, I was in love.

With my choice cemented and my Slaanesh sold, packaged and in the mail to an undisclosed location, i was ready to go. First things first, i needed to expand. Having a painted 2k list is nice, but without additional options (additional options that aren't garbage, go away Lord Executioner) there isn't a lot of room for flexibility. With NZ Masters 2019 a month away ya boi pulled his signature move and ordered another massive horde of models to paint in a month.

Oops. My Element Games crystals had stacked high enough i was able to nab a Spirit Torment and Chainghasts for free for casual games with the local club and I was able to pick up a limited edition Guardian of Souls from a lad online. The rest of the purchase requires no explanation.

The End of All Things (But Mostly Just this Article)

This brings us up to speed. The Grimghasts are on my desk being painted with every spare second I get, and every day draws nearer to flying down to Christchurch (our country is largely two big islands, sadly this event is on the island I don't live on) and going for gold with Olynder's Legion of Grief. I'll be posting a lot of hobby content as I go, and a ton of Battle Reports with local legends and fellow players in my local club. Will be posting a lot on twitter (@ThreeTwoPrince) and the various Age of Sigmar Facebook groups in New Zealand. Cheers for reading.