During the Age of Might the Kingdom of Odentia in the Realm Of Death was a quiet fiefdom far removed from the main population clusters of the Realm.  The political power in the Kingdom centered around the Order Of The Bended Knee, a loose association of knights who controlled the local countryside from their scattered feudal holdings. The Order’s political power was buttressed by their role in the religious ancestor worship/veneration that dominated the cultural landscape of the kingdom. The populace held deep respect for their ancestral dead, raising the most honored of these deceased up to the devotional level of Saints, who were prayed to for guidance and spiritual intercession. The knights of the Order depicted themselves as temporal stewards of the Saints, carrying out their spiritual will and taking over the Saints’ martial protection of the kingdom. The most popular Saint in the devotional hierarchy was Saint Simeon, patron saint of penance. In the early history of the kingdom, Odentia was decimated by plague. As the community began to fall apart due to the impact of the epidemic, a young monk by the name of Simeon led a spiritual resurgence that focused on personal penance as the whole community looked to the saints for forgiveness from whatever sins had brought the great plague down upon them.  By leading communal ceremonies of confession and penance Simeon brought the fractured community together and helped them cope with the devastation that the disease was reeking throughout Odentia. As the plague eventually subsided Simeon was revered as a savior and quickly entered the canon of Saints when he died a few decades later. In the wake of Simeon’s death and canonization, the Order adopted him as their patron saint and linked his popularity to their political power. They took on the new role of spiritual guardians of the kingdom, as stewards of public penance and enforcers of communal worship.

This was the state of the Kingdom of Odentia when the forces of Chaos surged into the Realm during the Age Of Chaos.  As it was not one of the central kingdoms of the Realm, Odentia was not pivotal in the War Of Bones that saw Archaon invade the Realm Of Death and defeat Nagash. However, the tide of Chaos finally reached Odentia and the kingdom was besieged by the forces of the Dark Gods. The armies of the Everchosen overwhelmed the castles of the Order and ravaged the saintly monasteries that dotted the countryside of Odentia.  The Order fought gallantly to protect their charges but in the face of the Chaos legions they were decimated and the entire kingdom was set ablaze. Refugees from the settlements of old Odentia struggled for survival, scavenging for whatever food and resources they could find.  Slowly their humanity slipped away as they were forced to do unthinkable acts for mere subsistence. It began with stealing from each other and the consumption of domesticated animals like dogs and cats, but quickly escalated into grotesque scenes of cannabalism,

It was this depravity that drew the Carrion King to Odentia. Unwittingly freed from his prison by the legions of Archaon, the King came into Odentia and rallied its people against the forces of Chaos.  Gathering the remnants of the Order Of The Bended Knee and the rest of the kingdom’s refugees the King feed them his flesh and corrupting blood and the Kingdom of Odentia was reborn.  The derangement of the King swept through the minds of the Odentia refugees and forever altered their reality.  The refugees came to see the King as Saint Simeon reborn, come to them in their hour of need.  They had sinned and brought down a great punishment upon themselves but through Saint Simeon and the path of penance they could be atoned.  The Saint forgave them and through a holy communion with him gave them the spiritual strength to free their kingdom. With a renewed Order and the Saint at the lead the forces of Odentia fought back the wave of Chaos and began reestablishing their homeland.  The  Atonement War was long and bitter but with the power the Saint provided the forces of Chaos were expelled and Odentia was rechristened. In wake of the Atonement War Saint Simeon proclaimed that his work was done and that he was needed elsewhere.  He anointed the Knights Of The Order Of The Bended Knee as his spiritual successors and they drank deeply from his cup and were filled with his holy power.  He claimed that through them he would watch over Odentia and when they needed him most he would return and ensure the prosperity of the kingdom. Throughout the Age of Chaos the Order and their penitent knights keep the forces of Chaos at bay and carried on the legacy of the Saint.

As the Age of Sigmar dawned Odentia was awash in optimism.  As the forces of Chaos receded, for the first time Odentia was not besieged on all sides.  The Order took it as a providential sign from Saint Simeon that a time of renewal was at hand.  They were being rewarded for their devotion and were the chosen, destined to lead all into the new glorious dawn.  Thus Lord Belisarius, Grand Master Of The Order Of The Bended Knee has called a Grand Penitent Crusade.  All the forces of Odentia, the military orders, the penitent flagellants and the devoted monks rally ready to spill forth from the boarders of Odentia and bring the truth and prosperity of Saint Simeon’s path to all those in the Realm of Death.

Welcome to my FEC work in progress.  Since AOS 2 hit I have decided to finally finish my FEC army. Above is my fluff and here is what I have completely painted so far.

Here is Lord Alexius the Steady, Field Commander of the Order Of The Bended Knee. He is one of my Varghulfs Courtiers that I converted from the GW giant kit. 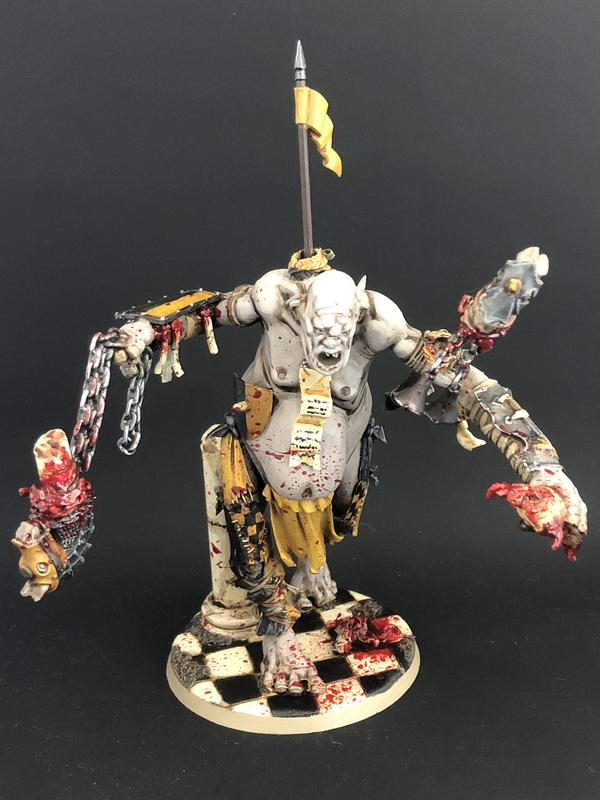 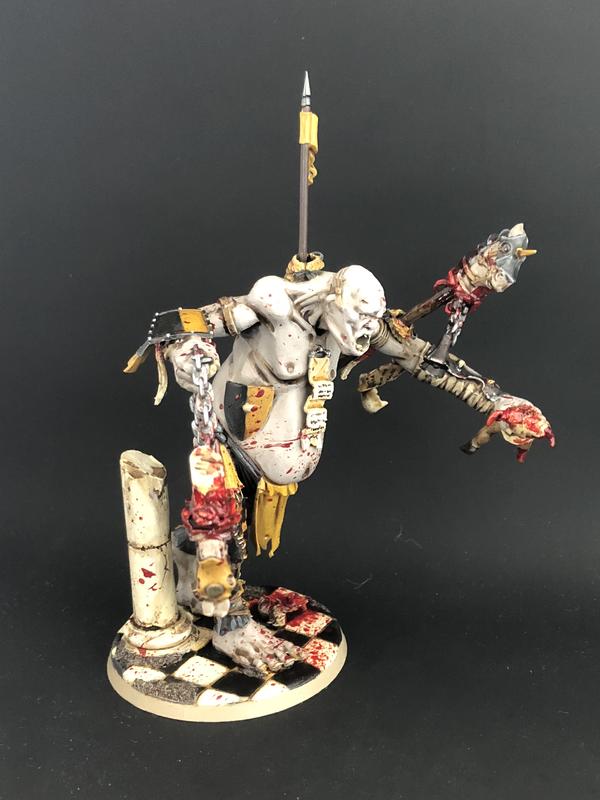 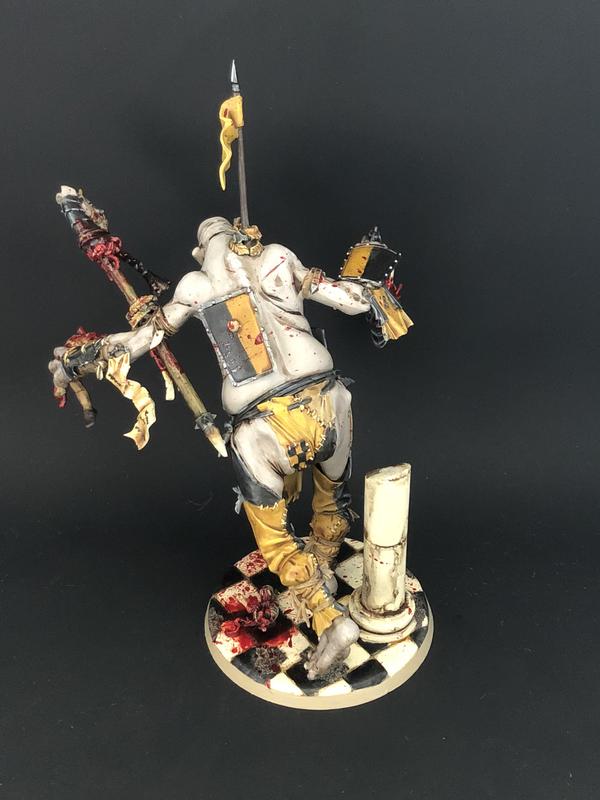