This week i am attending the Coalescence event at Warhammer World hosted by Steve (@tinracersteve) and James (@jimbo9jimbo), part of the NEO network. For those of you that aren't aware of the event it is a narrative event being run at numerous locations around the world on the same day, and all feeding into a single narrative. I've chosen to take Tzeentch to the event, which gave me a bit of a dilemma as the Tzeentch book is pretty strong, so finding a narrative list that isn't ridiculously over the top was a bit of a challenge. One of the things I have noticed with narrative events is the different ways that people approach the narrative - some people pick a 'softer' army, which I have done before, and I didn't find that much fun. The solution I have gone for is to pick what I think is a strong list, but one that isn't ridiculously over powered, but I have decided to give myself a story and some goals for the days gaming.

I have written a little bit of narrative based on one of the armies (or fairly shamelessly stolen) in the Tzeentch book:

My general shall be Zyclaw, a bitter and power hungry Tzangor Shaman. He fully believes that he is guided by the future - his visions have so far proven to be extremely successful and he has been on an epic quest to kill 999 other magic users. His visions have lead him into the Realm of Shyish, where he hopes to find some magical users of great power. Unfortunately he has sent away many of his fabled Skyfire Warriors on a secret task, leaving only a small force to look after him, but he has been sent a small group of Demons to work with him. One of the Omniscient Oracles has been looking over Zyclaws Changemasters, and should the need arise, will make an appearance to turn the tides of battle in Tzeentchs favour.

My plan is to use this as a kind of secondary objective for the games where I have to kill any magic users in the opposition army. I've played against someone before who had a goal for his army which he tried to achieve at the expense of the overall objective, and this was a game that I didn't enjoy at all as he basically let me walk away with the game as he made no attempt to stop me, and I just let him achieve his objective. We basically played two different games and I cant imagine it was overly satisfying for him either. I think its important that both players have the game objective in mind, but a fun secondary narrative goal is also a nice idea.

My main aim of course is to have three excellent games and a nice slap up lunch in Bugmans though!

Well, the event itself was really well run by Steve and James. From my point of view I had three fun games, although the first two were a little one sided for various reasons, but the third game was very good. I played James (the TO) first with his Seraphon. The game started off badly as I did hardly any damage to James's force, but I did manage to get my Harbinger into the Warscryer Citadel which allowed me to really start utilising the Malign Portent options. I had picked the Falling Star option as the narrative was all about seeing the future, which suited my backstory. I then found that for five prophecy points I could give the Skyfires plus one on their hit roles....

...at this point we broke for lunch, but when we returned the three sky fires went mental and smashed their way through a whole unit of Saurus Guard. I shot the Skink Starpriest to achieve my narrative goal, and that was pretty much the game. 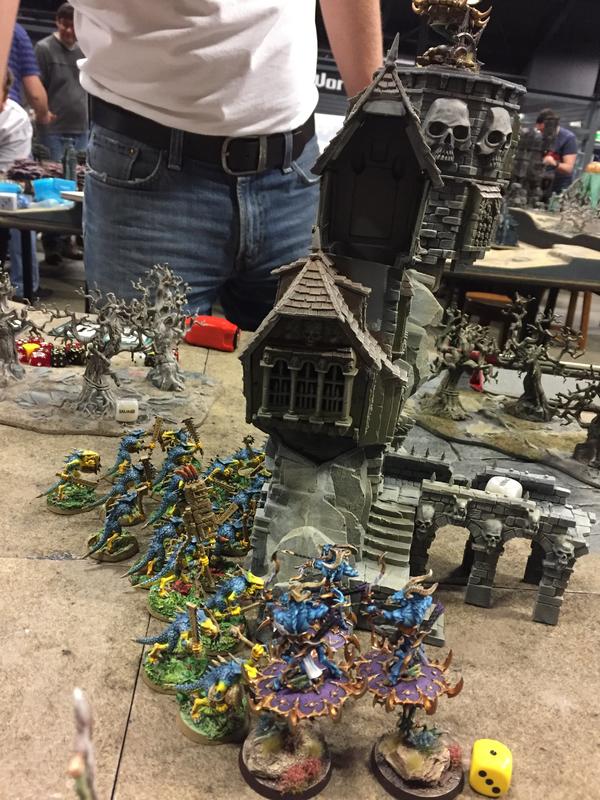 Second game I played the Ironjawz, and  the gentleman I played was a newer player so we spent quite a bit of time discussing how rules interactions worked, and talking through the intricacies of piling in and how to do it to maximise attacks etc. Once again the Skyfires went ballistic, and I also found out the an Exalted flamer does have some uses. The Screamers killed the war chanter early on to keep the narrative going, and after that it became a slug fest. In the end I had 10 Kairic Acolytes left who managed to survive the game due to being so out of position as to be virtually useless, and a single pink horror who managed to cast Bolt of Tzeentch and do the remaining five wounds needed to remove the last two brutes in the opposing force, thus carrying the day for the forces of Tzeentch. 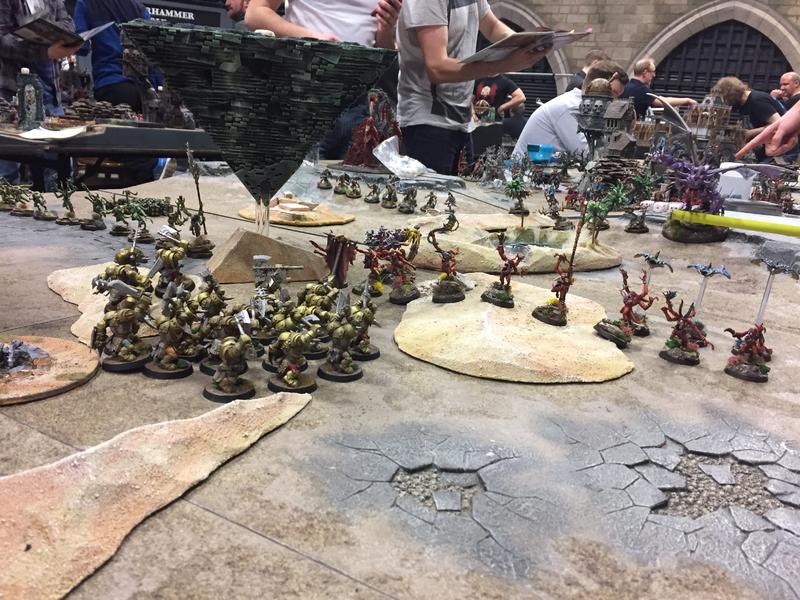 The battle lines are drawn... 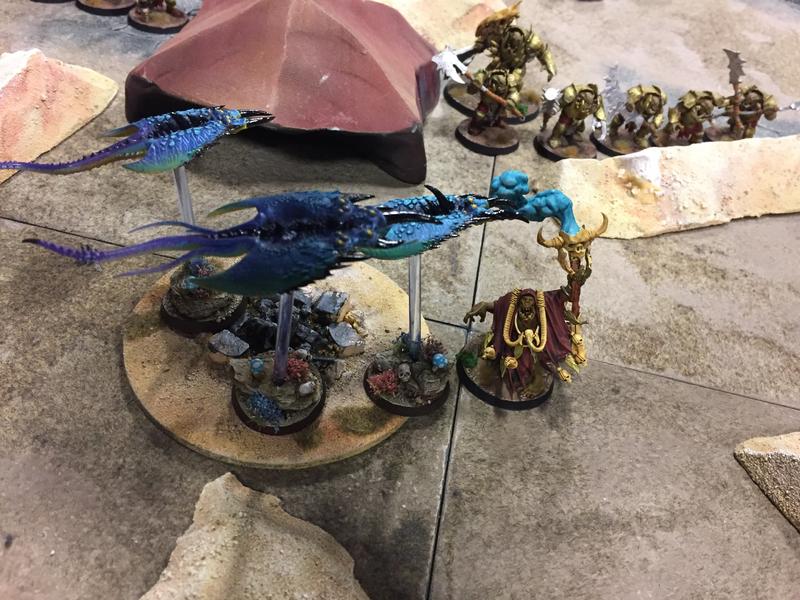 The Screamers assassinate the Warchanter...

My third game was against Steve's son Ben who I've known for a while but never played. He had a tough Nurgle force with 20 Blightkings (we both thought James and Steve paid us up !) and a Great Unclean one, and for this battle I had a Lord of Change who had arrived to oversee Zyclaws quest and report back to the Changer of Ways. This game didn't look good to begin with, but I managed to send the screamers on an assassination run to kill a herald and a little bit of clever placement meant the Blightkings got pulled backwards away from my lines, and allowed me to get into them with the Lord of change and the Skyfires. It was a solid game, but eventually the Tzeentch force carried the day once again, however it was not enough to stop the Focus of Death from claiming the overall narrative victory. 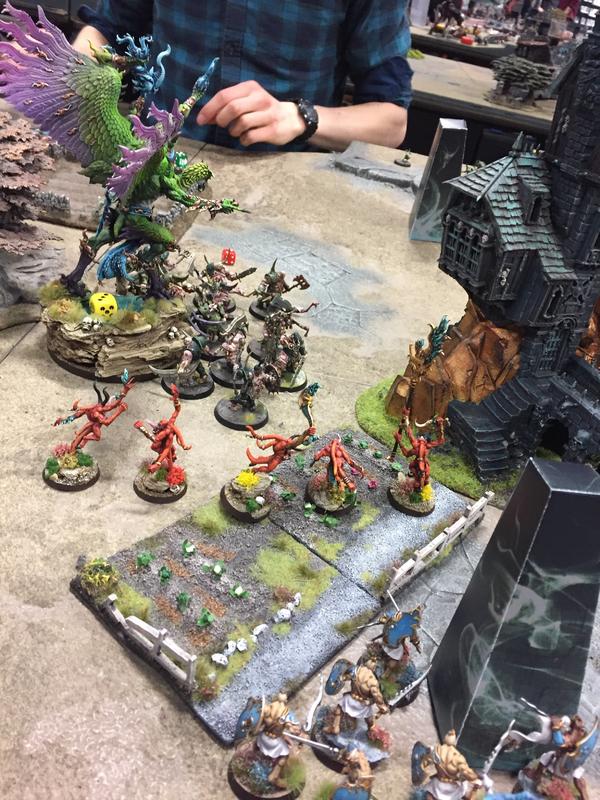 The Lord of Change goes into the Blight Kings...

The guys had done a few awards for the weekend, and Matt Hinton took the Narrative prize. He was rocking a unit of custom Lion knights with their own war scroll which was something I realised I could have done with the War Wagon and the Free People - definitely an opportunity missed! I was lucky enough to take the best painted award for the event. Overall it was great fun day, and I hadn't played in a long time so I was happy to have the three games. I think the army was too strong for the event in all honesty - the three Skyfires were just ridiculous all day long. This is still the hurdle I think has yet to be fully cleared with narrative events - how do you balance the games as people have very different views about what the narrative game should be. To be able to devise a story and battle plan that allows a variety of army compositions is still the holy grail, and I hope the NEO group continue to push the envelope of narrative gaming so we can see how far it can go.