As mentioned in my last post I played my first game of Age of Sigmar using the SCGT points system. We decided to also use one of the missions from their tournament pack called Battle for the Allpoints which had four realmgates set out on the board (one of which would collapse on turn 3) and the winner was whoever controlled the most at the end of the game. 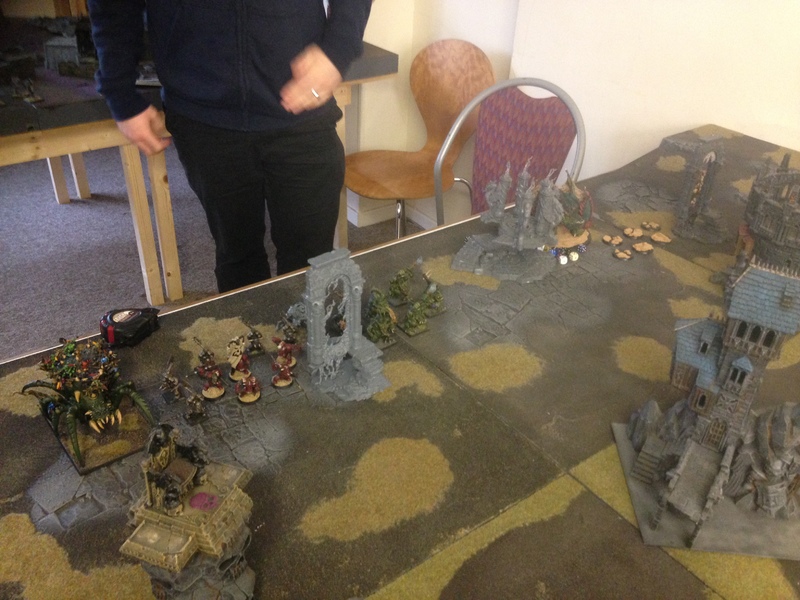 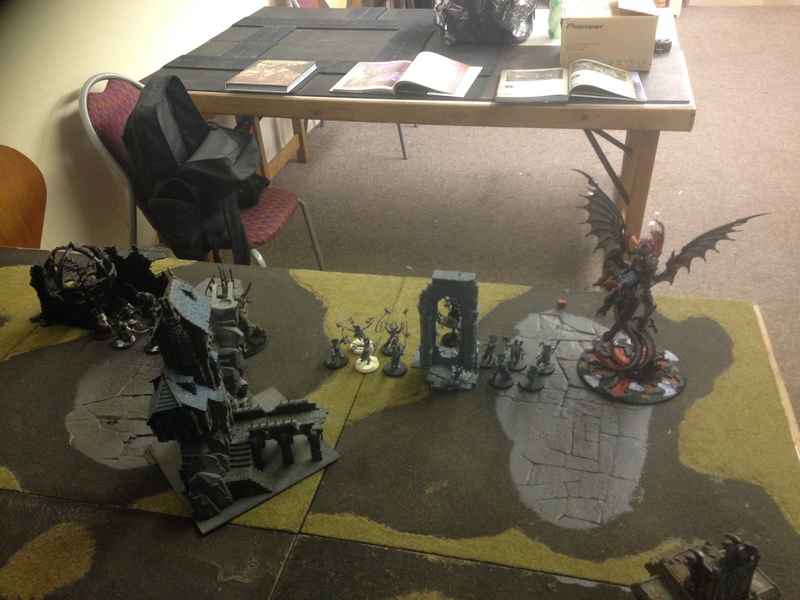 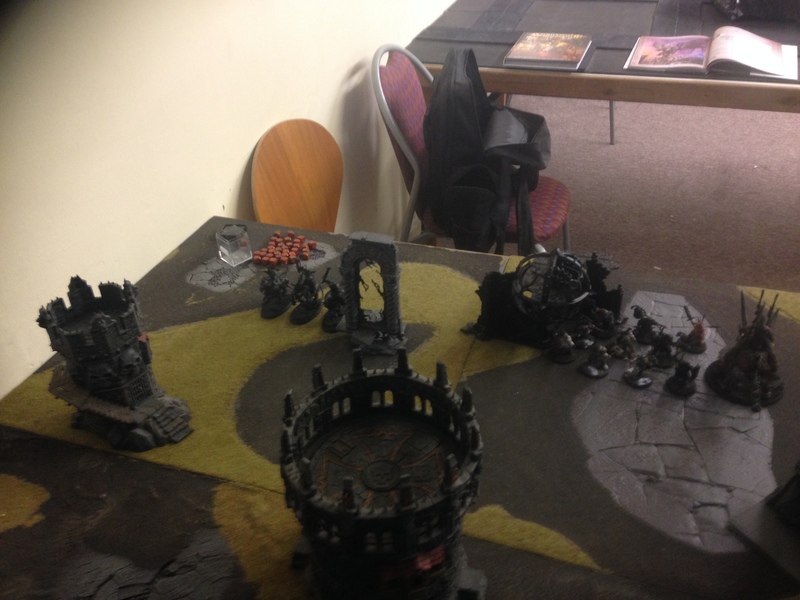 This was the overall setup for both our forces. His army consisted of a shaman on arachnarok spider, 10 ardboyz, an orc shaman, 6 fellwater troggoth, Godrakk, 6 regular troggoth and a aleguzzler gargant. 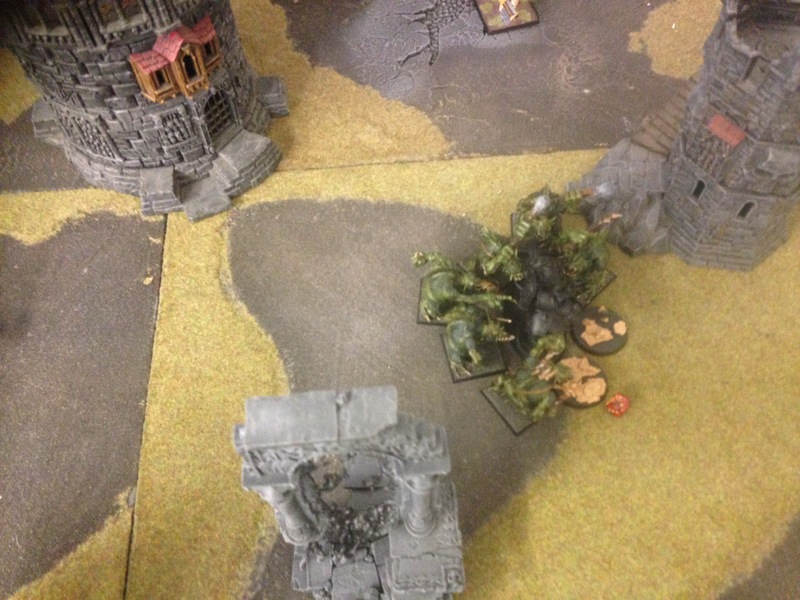 I managed to get priority once again and charged Archaon into the arachnarok, the wrathmongers into the ardboyz and the blightkings into the trolls. In the combat phase Archaon managed to fluff several on his attacks dealing a total of 7 to the arachnarok and taking 5 back in return.  The combined wrathmongers and skullreapers reduced the ardboyz to 3 models taking 1 wound in return. The Blightkings killed 4 fellwater troggoth .

In his hero phase he rolled for the troggoths regeneration and regained 2 fellwater troggoth and 3 regular troggoth. Because of how strong this rule seemed we were unsure whether we had used it correctly because it implied the trolls would continually regenerate lost models. Regardless of this he then charged Godrakk and the gargant into to blightkings. In combat the ardboyz finally fell to the combined wrathmongers and skullreapers. Archaon also finished off the Arachnarok dealing 9 wound alone with the slayer of kings. In the final combat Godrakk killed 4 blightkings, the troggoth another 2 and then finished off the varanguard. Before dying though the varanguard dealt 6 wounds to the gargant and then the remaining blightkings dealt a wound to Godrakk and killed another troggoth. The remaining blightkings then fled. 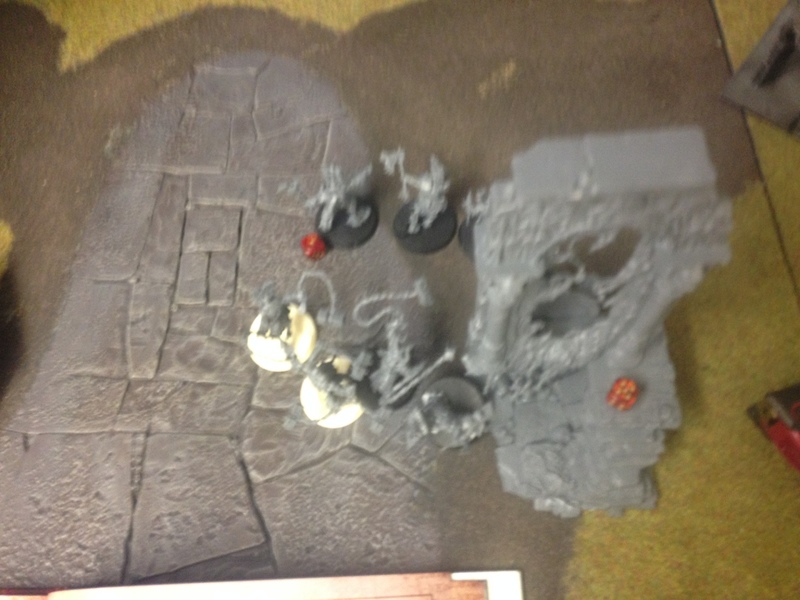 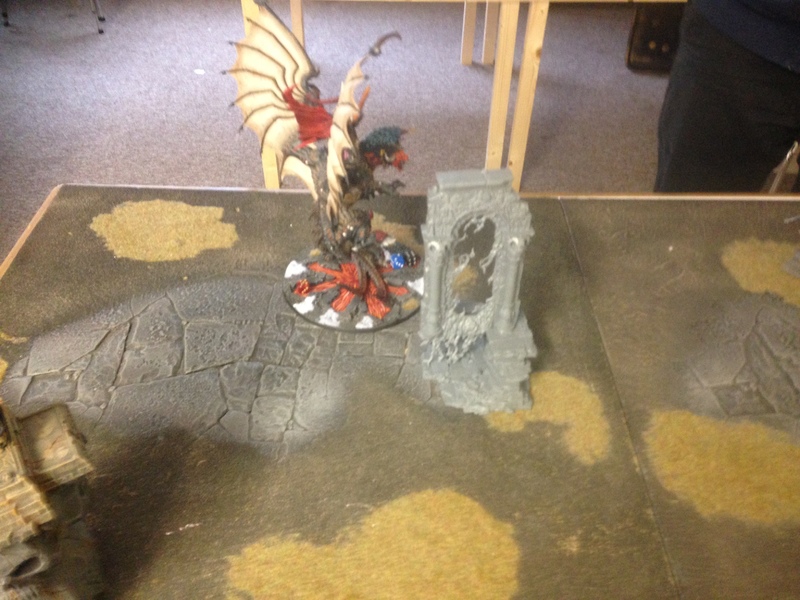 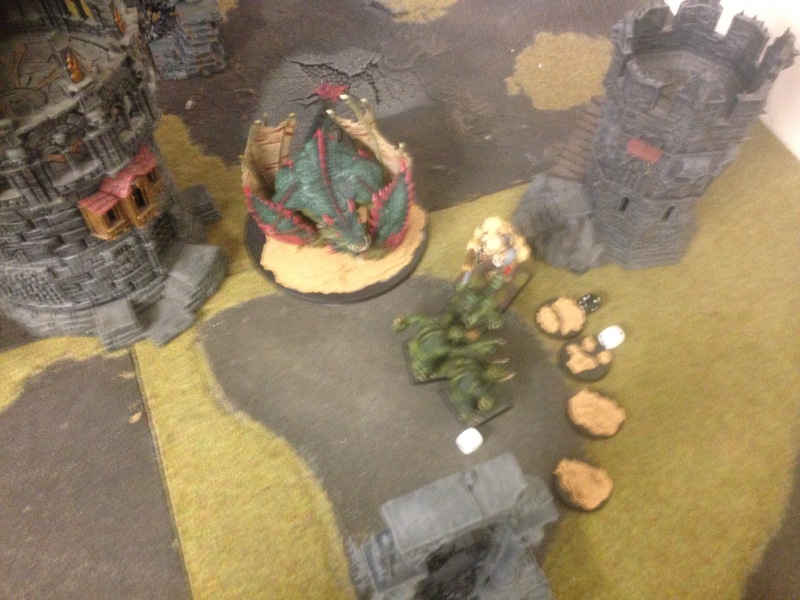 This turn the realmgate blew up and after a roll to randomise which one it ended up being the one near both my khorne units. The damage from the explosion left me with one skullreaper and 3 wrathmongers. I knew I had to try and capture another realmgate quickly so ran my wrathmongers towards the top realmgate, Bloab moved towards Godrakk and I flew Archaon over to try and kill the shaman. Archaon managed to fail a 7' charge and Bloab's shooting attack missed. I decided to then charge Bloab into Godrakk in hope of holding him up for a turn. Godrakk easily killed him.

In my opponents turn he sent his gargant towards my lone skullreaper while both troll units regenerated all wounds. He then moved his Fellwater troggoth back to capture the upper right realmgate followed by Godrakk. 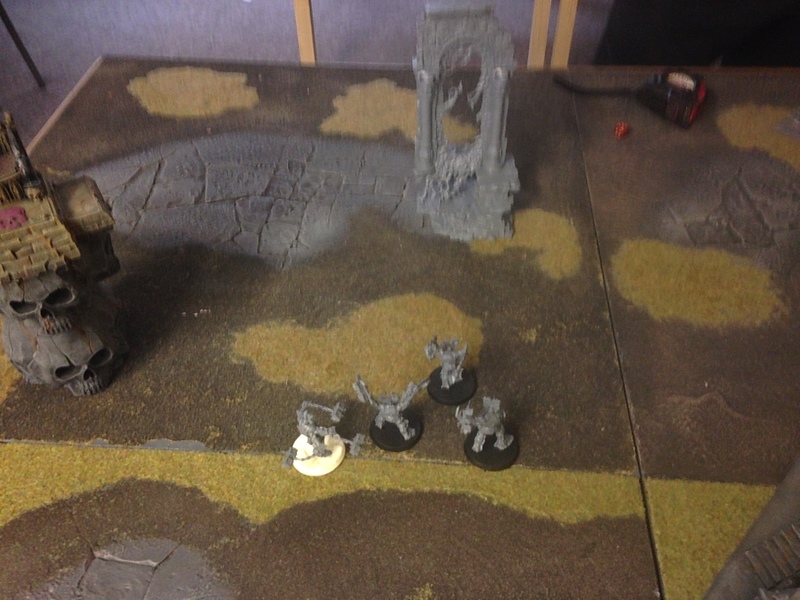 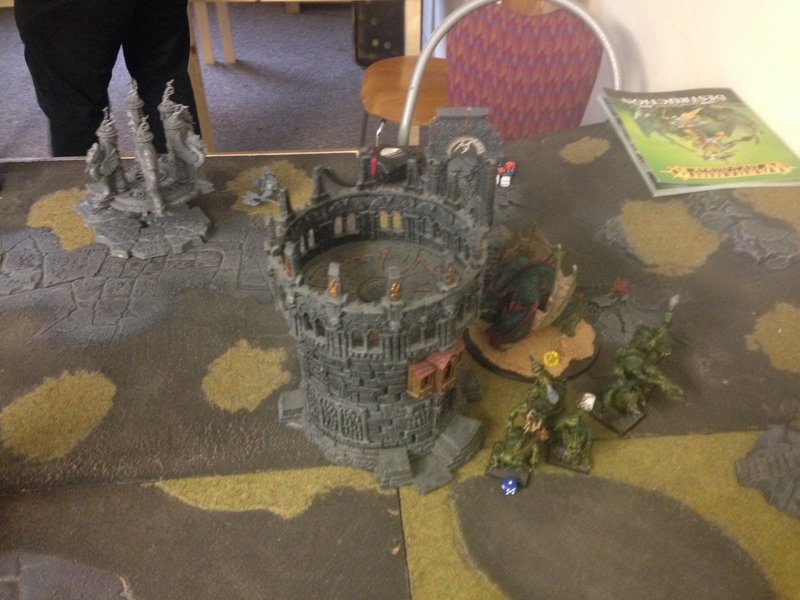 Nothing much happened this turn other than my opponent repositioning his units and then Archaon failing his critical charge against the troggoth.

In the final turn my opponest received priority meaning he charged Godrakk and the trolls into Archaon  nd teleported his other trolls next to my wrathmongers and then charged them. My wrathmongers managed to kill the trolls but in the other combat due to terrible rolling on my part Archaon was killed by Godrakk.

Overall I really enjoyed this game but think that for a mission like this specifically I need to include more fast units such as hellstriders so I can cross the board quicker. I also think I would have done better if I had placed Archaon my central in my force. The stand out unit in my list was clearly the Varanguard based on the amount of damage the could deal and their tanking ability. I also really liked the Bightkings and Archaon. The other units in comparsion I'm still not sold on but will try them out again to see. 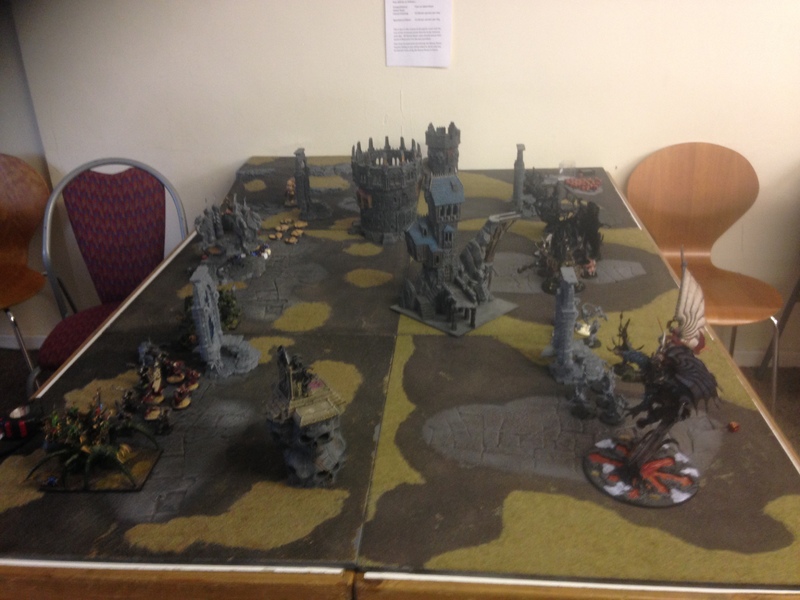 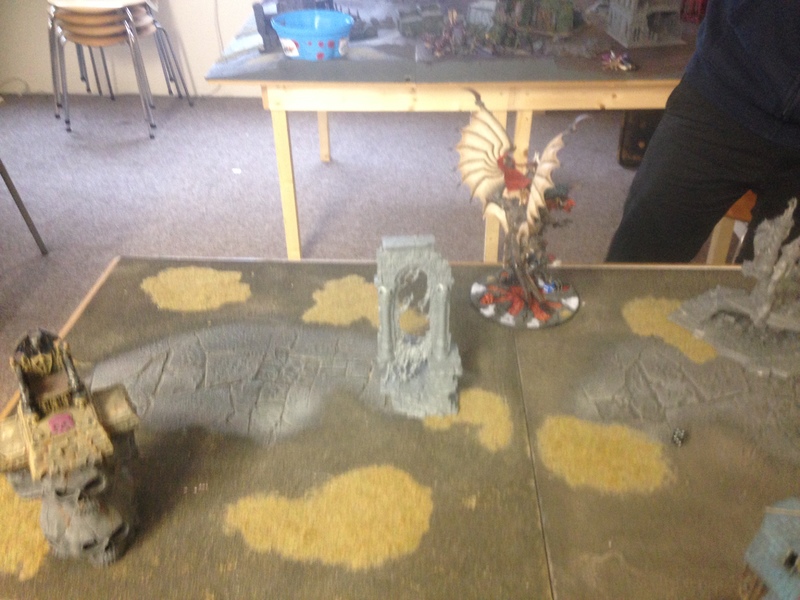 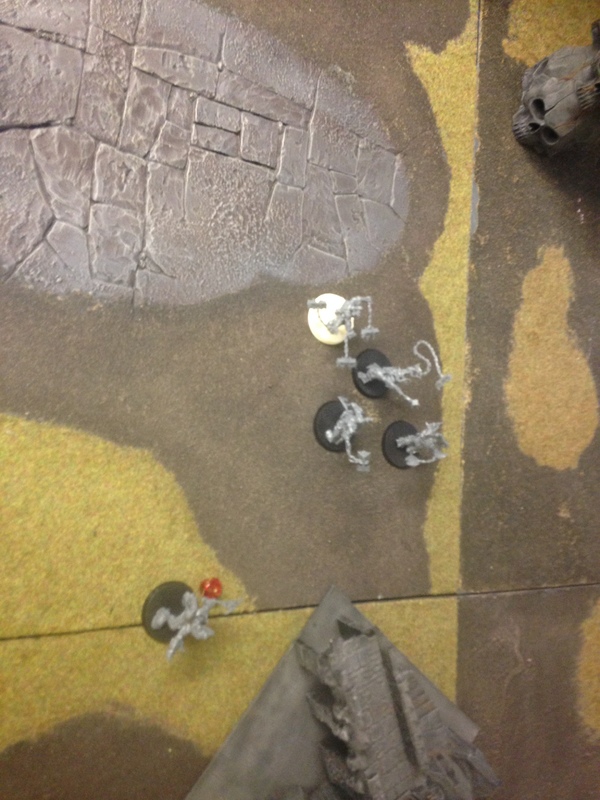