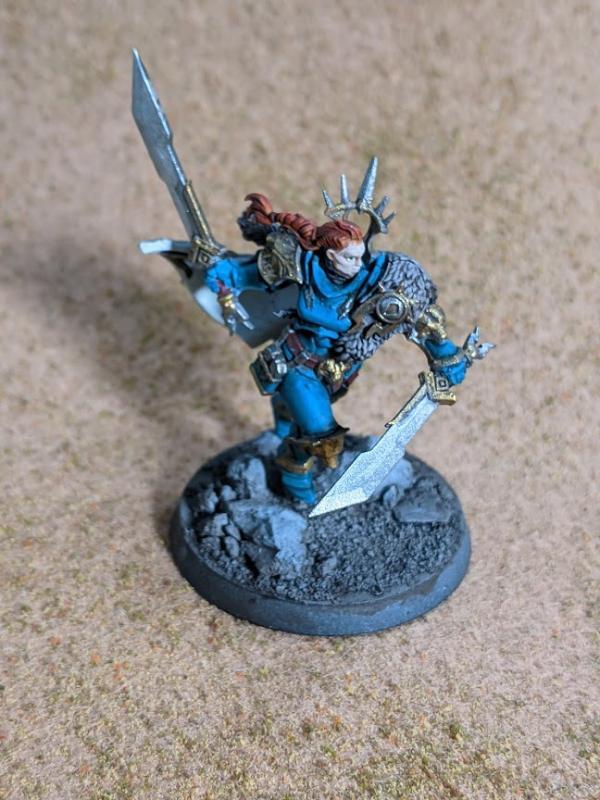 The memories flash back like they are still happening, often at the most inopportune moments.  Sigmar's forging techniques have become faster and the humanity of previous lives remain more vivid.  Maeve can still see in her mind the first time she saw Thostos Bladestorm and his "Angels of Zi'Mar", our sky god, come to her village on the Roaring Plans of the realm of beasts.  She thought they were saved, they all did.  Their mission was elsewhere.

That experienced changed her though, Zi'Mar, or Sigmar as she was corrected, was real.  She was saw awed by his sky warriors,  She grew to be a leader of her people, a priest of Zi'Mar, and in her world, that meant she had to fight.  She fought the orruks who had taken over the land and the forces of chaos that were ever present.  She became a great and inspiring leader and warrior.

Then she heard the drums.  A constant pounding, she knew not from where, but knew it could be good.  Their wooden palisade and hardened warriors had held out before, but this was different.  She looked out over the hordes or beastmen approaching.  They were being led and whipped into a frenzy by a large warrior riding a chariot.  Waves of these beasts smashed into the walls, repelled by her warriors but they came from all sides.  She knew they couldn't last.  The gates broke down and Cuchulag, leader of this breyherd road victoriously though the open portal.

Maeve called out to him, "If you want to fight, prove yourself against me!".

He stopped in his chariot, the pounding getting ever louder, the masses braying.   Room cleared.  He stepped down from his chariot, holding his huge axe.  The hordes though did not stop.  They massacred her village as she stood there.  She knew she didn't stand a chance.  She called to Zi'Mar, "Bring me know your power!  Let my vengeance destroy this beast that brings chaos to this land!"  At that she charged straight at Cuchulag, swords at the ready, but without the power to win.  As she started to feel the blade of his axe cleave her side, she saw the gold light of Sigmar...

Our escalation league is allowing us to bring an Anvil of Apotheosis character.  Because there are many new players, many don't have the extra characters to bring or don't want to deal with Anvil of Apotheosis rules while also learning the the game and their army.  I really like the narrative aspect of building characters so I thought I'd make an enemy of my character to bring and offer to my opponents if they don't have their own.

This is a model and character I built a couple of years ago for my Stormcast army.  It is a very slightly converted Neave Blacktalon who I gave swords and made a Celestial Vindicator named Maeve Shadowblade.  I built the following 20 pt AoA character to represent her: 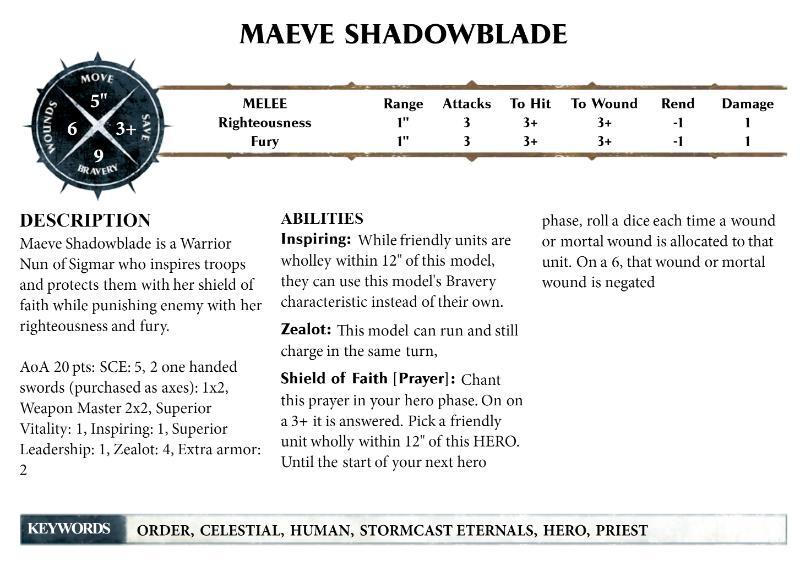 I'm not sure I'm doing the weapons correctly.  In AoA you can take two one handed weapons.  I think you then have to pay for enhancements to each. I actually bought them as axes because it saved 4 pts to get to the exact same stats - which I thought was dumb.  They basically get free rend relative to "swords".  I was going to list them together with just 6 attacks and I kept them the same.  In the end, I just like the idea of naming the swords Riotousness and Fury so I put them on separate lines.  I've been watching the show "Warrior Nun" lately so I'm sure I was inspired by that to make her a priest.  Since the model is running, I had to give her run and charge.

Some of the details here come from the book Bladestorm which I mention in my early blog entries was an inspiration for this army and my SCE army.  I'm sure you'll be seeing Maeve in some of the upcoming battle reports as she come back from her forging to exact vengeance on Cuchulag.  She is so single focused, that she'll join any army to defeat him, maybe over and over