Cuchulag surveyed the field.  "My previous shaman failed to hold for even the hour required for me to arrive.  You've done better Grimtoe.  Now get me that Chimera".  Grimtoe the shaman had found the next target, another nexus of magic.  Cuchulag was searching Ghur for these nexus to corrupt for chaos and bring him power.  This time, it brought them the legendary training ground of the gods which had been lost, said to only revel itself to the great heros.

Across the battlefield, he saw arrayed against him a small vanguard of those bizarre elves that appear to swim through air and with them appeared to be one of Sigmar's pets.  She looked somehow familiar, but the memory escaped him.  There were two magic nexus which he must corrupt and consume before his enemy.

He could take it no longer and signaled his Bestigors to move in and take the first nexus.  Another group had swung around undetected to a flank and took the other nexus.   For Cuchulag, the draw of the training ground and the power it would bring, overcame his control as he charged forward to partake in it's magic.  The mistake was soon obvious.  A group of screaming reavers started to  swarm him, behind them came their leader, a Soulrender, and that Stormcast - with anger in her heart.  Cuchulag was pulled from his chariot dragged away by the reavers.  His Bestigors were beset by even more of these strange fish elves.

Grimtoe thought, "well great....I guess it's up to me".  He started the ritual of sacrifice to the gods.  He made a makeshift herdstone from a tower and tried to summon a great beast it help them.  Much fighting swirled around him.  Suddenly, there were reavers on top of him, interrupting the ceremony and depriving him of his sacrifices, so close to completion.  "No matter", he thought, and sliced his own flesh for the alter.  The wound was deep and soon he heard the cry of the three headed monster.  The Chimera is coming...

Maeve sees her prey.  She's joined this group of Deepkin in their quest to wield the magic of this land just for the chance to finally kill this Bestlord and he ran across the battlefield no no apparent care.  "He's mine!", she screams, but before she gets a chance the reavers took him down and he was lost in the swarm.  "No matter", she thought, "I'll take my vengeance on the rest".  She could feel the power of Sigmar.  She gave his power to the reavers with her but it didn't matter, they were cut down to the man by the Bestigors.  She charged by herself into the fray of Beastmen but then heard the roar of a monster behind her.  She was from this land, so knew that cry well but her fury was is front of her.  Over and over she called on the power of Sigmar but something she had done had offended her fickle master.  These beasts were defeated but behind her, the Chimera chased off the remaining deepkin and completed the corruption of this nexus. 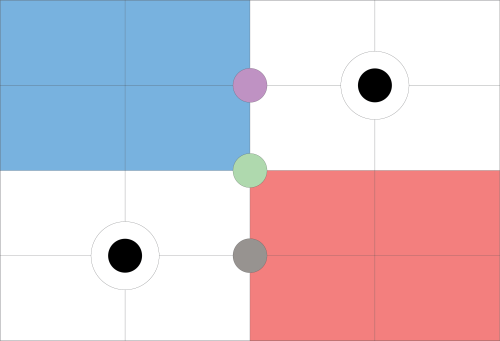 This battle was on a 44"x30" board with 500 points per army plus an AoA character.  There were two objectives and three special locations:
Training Ground - Purple: Once per game with a leader unit only: Choose one of the following for a single weapon profile, "Attacks", "To Hit", "To Wound", or "Damage" and add 1 to the characteristic of your choice.

Blacksmith - Grey: Once per battle round with a leader unit only: Choose one of the following for a single weapon profile, "Rend" or "Save" and increase it by 1.

Points were awarded for objectives based on how many turns you held them.  The beasts of chaos were in the red position.  I was pretty dumb and ran Cuchulag right to the training ground.  I wanted the extra attack and thought he could hold up for a turn, heal and allow the Bestigors to charge.  He could not.  I did remember after the third move that I could redeploy but that didn't end up helping.

My opponent pulled off a long charge to get to my ungors to stop the Chimera from coming on,  I still needed 4 call points to summon the Chimera.  I won the priority roll and rolled a 6 (3 on the d3) to get the points I needed.  There really wasn't much room to place the Chimera.  I did get him on the far objective and took out one of the eels (tanky type) with his breath.  He thought about charging but was worried about the breath attack.  That new command ability makes the Chimera much more powerful.  You really need to think about it before charging into d6 mortal wounds.  In the end, he banked on taking the other objective and ran them away.

We are using some custom cards built by the person running the league.  We drew each turn for our AoA characters and for the environment.  They provide buffs and potential VP + and -.  He had one on Maeve that gave her a +1 to prayers and if she never failed, in this case roll of 1, he'd have gotten 3 VPs at the end of the game.  While attacking the Bestigors, she rolled a 1 and took a mortal wound - and more importantly lost the potential VPs.

I ended up winning 14-10 because the Bestigors were able to hold out for one extra turn and he lost the potential 3 VP.

In all, it was a great game.  It didn't feel like a 500 pt game because a lot happened.  My opponent is very new the AoS.  I'm old to AoS but new to 3rd edition.  We didn't use Battle Tactics because there was already so much going on.  Our armies were similar in a lot of ways.  Both would do a tone of damage if we got the charge but also died very quick when we didn't.  The Chimera was a big swing for a 500 pt game  I was glad to be able to finally use it.

Here are some pictures of the game....

Setup  - Note: we both forgot our terrain, so I used the tower as a Herdstone and he used the building as a ship 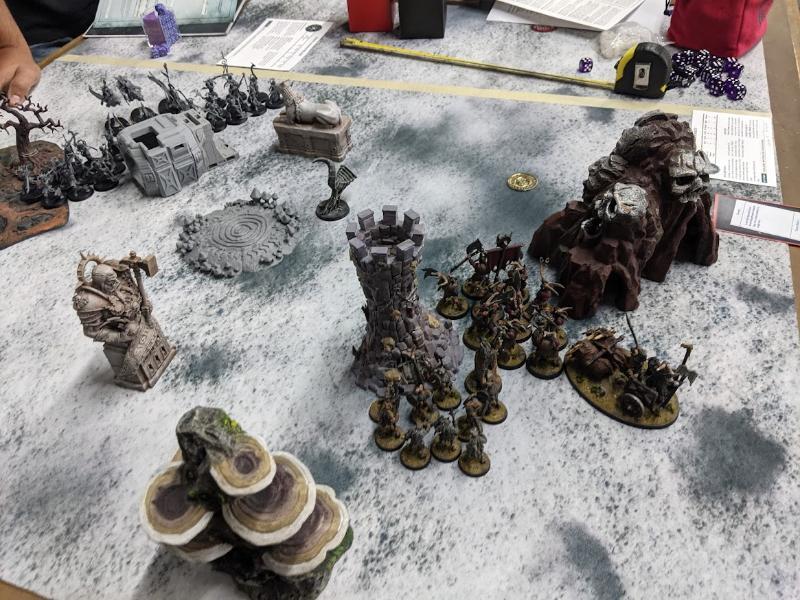 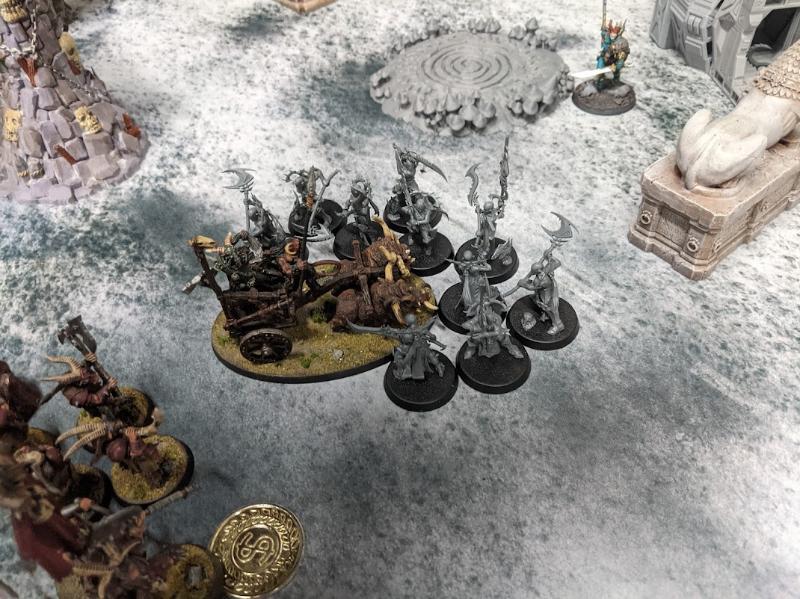 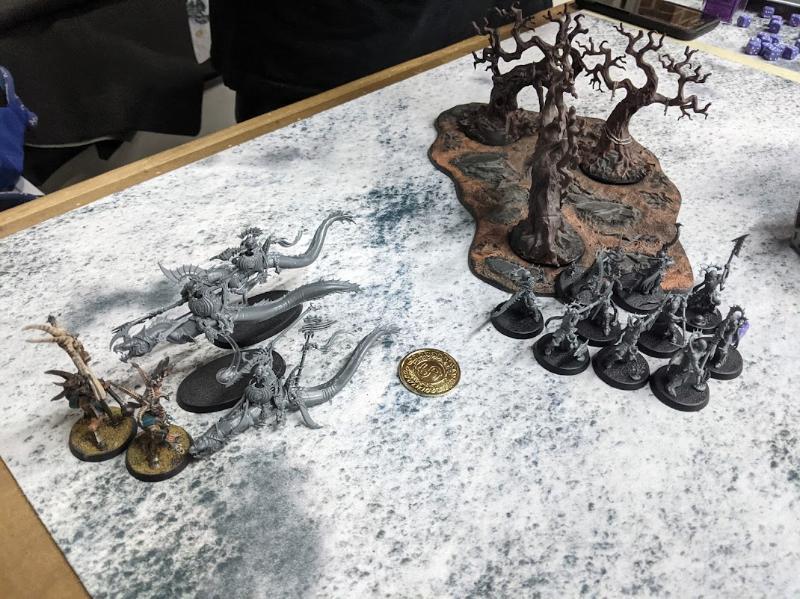 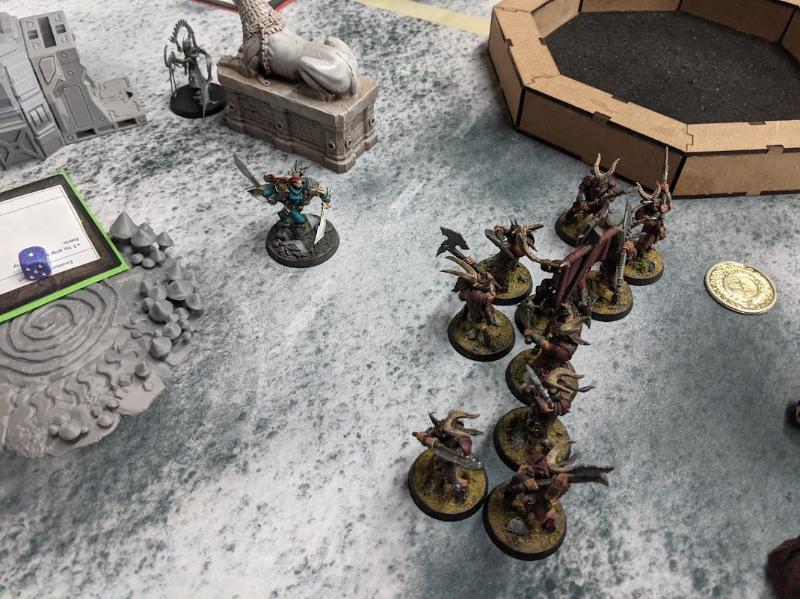 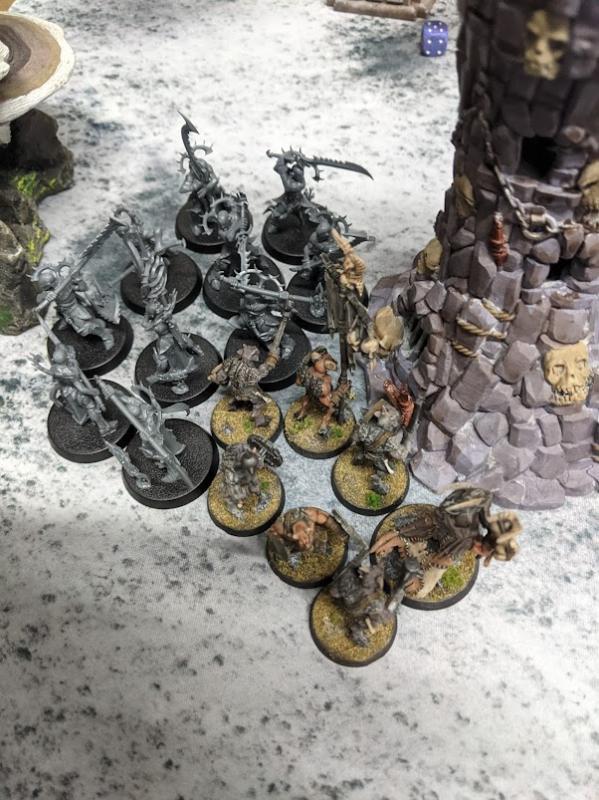 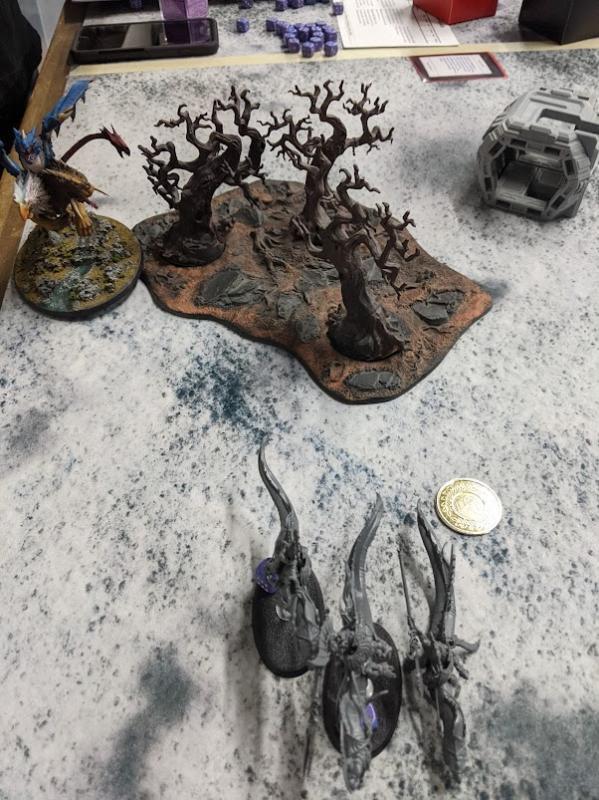 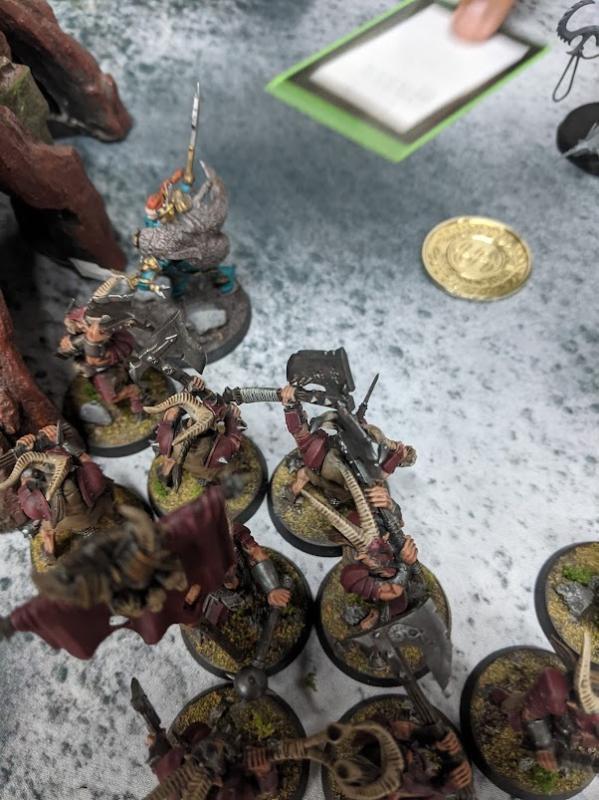