After the absolute bloodbath and feeling of victory that came from winning against a Teclis Syar build, I was then faced with dealing with a Nurgle force, playing the Scorhed Earth battleplan.

To review, my Nighthaunt army consisted of:

I had not played against Nurgle before and don’t have my opponent’s list. Here’s my best recollection of it (with help of looking things up online): 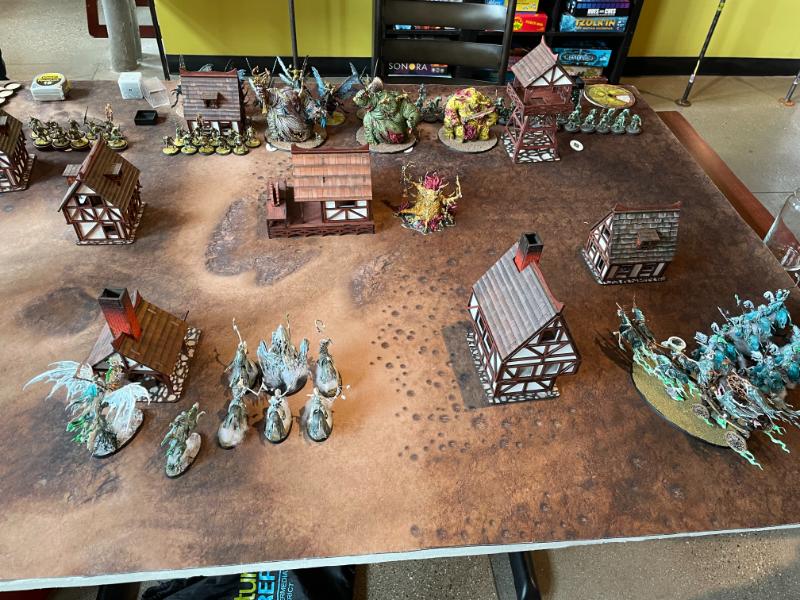 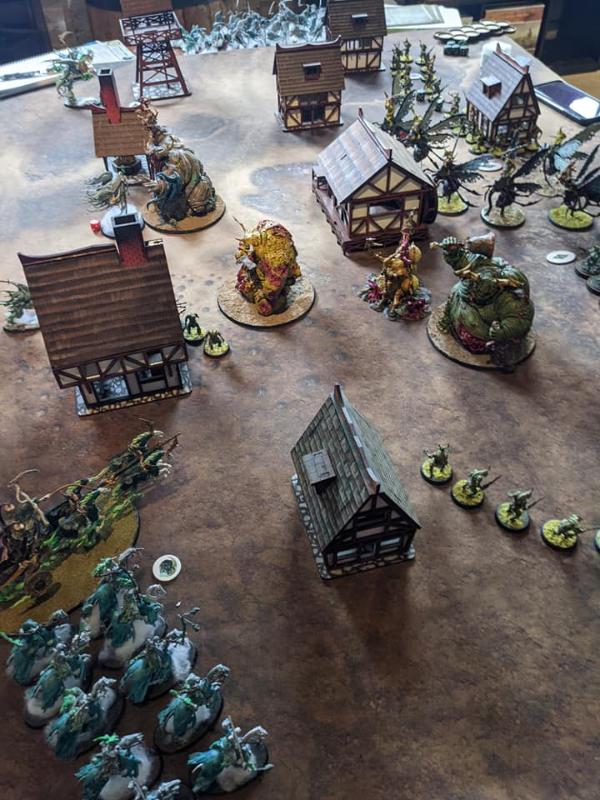 My opponent deployed in a similar vein to the LRL opponent - wide so that they could block me from deeps triking in behind them. His three Great Unclean Ones were in the middle, the two small units of Plaguebearers were to one side with the Plauge Drones and the big unit of the Plaguebearers were on the other side. The tree was pretty much in the middle.

I put my Reapers, Krulghast, Chainrasp Horde, and Harridans in the underworlds. In the middle I had Lady Olynder surround by the unit of 5 Hexwraiths on one objective, the Dreadblade Harrow tagging the other middle objective while granting his Pendant aura, Reikenor on one flank and the Black Coach and unit of 10 Hexwraiths on the other flank.

He outdropped me and gave me the first turn. I didn’t do much, besides cast Cogs and slow it down to give Reikenor re-rolling saves. I decided not to move forward (a mistake), as I didn’t like my odds of breaking through his castle without opening my territory up for attack. So I just kept everything where it was more or less, and scored my 4 points. On his turn, thanks to two lucky charges (over 7) and after summoning a unit of 5 Plaguebearers, he was able to take one of my objectives off of me, deleting my Dreadblade, and burning one of my objectives. He had also hit several of my units with a nasty spell, that just about took out the 5 Hexwraiths I had guarding Lady Olynder. It was my fault for leaving a gap and that was a case of me misjudging how fast his army could get to me on the smaller tables.

I sent Reikenor into his unit of 10 Plaguebearers on the far flank and deepstruck my Reapers to support Reikenor. I deepstruck my Harridans and the Krulghast behind Lady Olynder to support her as she was going one on one at that point against Rottigus. Reikenor zapped a unit of Plaguebeaers in the middle with Wraithstorm, taking out 3. I should have targeted the ones on the flank that he was currently fighting.

Reikenor took out several of the small unit of 10, but my Reapers failed their charge, even with a re-roll. This was due to me getting out of range of Cogs and being unable to activate it - another mistake. My 10 Hexwraiths got a 9+ Wave of Terror off on his general and got it down to 3 wounds. My Black Coach charged the melee Great Unclean One to tie it up. Overall I wasn’t able to claim any new objectives and was starting to fall behind as I had lost the one. Going into turn 3 it was 11-7 him.

I got the double on turn 3 and deepstruck my Chainrasp Horde behind his line. I got a Wave of Terror charge off with the Reapers and took out a unit of Plaguebearers and most of the Plague Drones. My Hexwraiths took down the general, while Lady Olynder was swiped away by Rottigus. The Black Coach did some serious work against the melee hero with retreat and charge, and had the aura from the Krulghast activated which saved it three times. The Harridans were also saved largely thanks to the Krulghast.

I had forgotten to charge in my Chainrasp Horde, and there were two Plagebearers left on the one objective to just one Reikenor. I burned the one objective in the middle my Reapers had claimed but rolled a 1. This left me with only 4 points so it was only tied up 11-11. On his turn he ran some summoned Plaguebearers onto one of my unguarded objectives and burned it, also rolling a three. Rottigus was in range of fighting the Black Coach, which was yet another mistake by me as my Harridans getting destroyed were one of my secondaries.

The game may have gone differently had we finished it, as my Reapers would have demolished his remaining Plaguebearers, but I also made several mistakes that cost me the game. Nurgle was a really tough matchup as they have a lot of defense, but I felt like I was able to chew through quite a lot of it.

This was a game of mistakes for me. However, the Black Coach, unit of 10 Hexwraiths, Reapers, and Krulghast all really shone in this game. The Krulghast using his ability to give the Black Coach a 4+/5+ in particular was a really strong move that made it a really hard unit for my opponent. It was tagged by the melee Great Unclean One and the Rottigus and did just fine. I felt like I wish I had a unit of 10 Hexwraiths around Lady Olynder this game, but the unit of 10 did some major work. And I continue to love the ability of Reapers to work without a hero buff.