After a defeat against Nurgle, my final game of the event was against a Cities of Sigmar force. I felt pretty good going into this matchup, as I have played against Cities the most of any army. The battleplan was Total Conquest.

My opponent played a Tempest Eye list that was Dwarves (Duardin, sorry), with some interesting conversions using 40k models (that included Dwarves riding motorbikes as pistoliers). Here's his list as best as I remember: 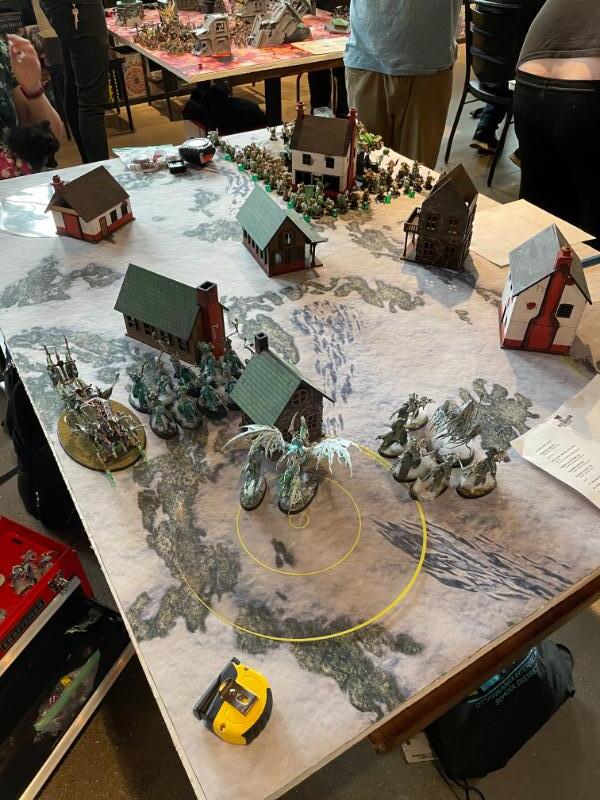 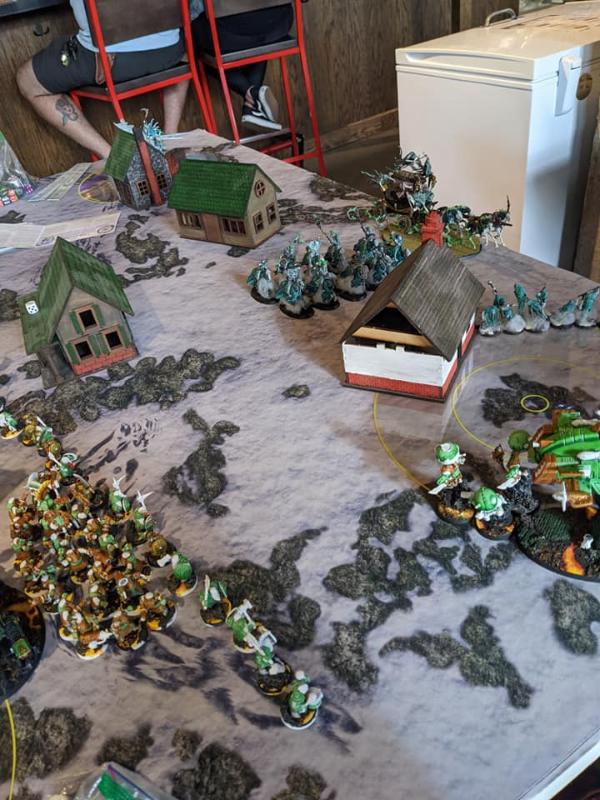 You can see deployment pretty good here. I did my staple of deep striking the 30 Reapers, Krulghast, Chainrasps, and Harridans.

My opponent set up a castle around his objective. I out dropped him, but decided to give him the first turn. He sent his Fyreslayers onto the objective Lady Olynder was facing and his KO onto the objective the Hexwraiths and Black Coach were facing.

I responded by deepstriking 10 Chainrasps onto the objective with his KO... I was just able to squeeze all 10 of them in to claim it from him. I also got off some charges into the Fyreslayers with Lady O and her Hexwraiths. Lady O knocked out the hero that boosted the Fyreslayer unit, but the Fyreslayers chewed through 3 Hexwraiths. I won the priority, but wanted him to break his castle a little bit, so gave it away. He moved his KO to try to knock out Reikenor and take my back objective. That failed, though he did get the Gunhauler into combat with Reikenor. He also launched his Pistoliers into the remaining two Hexwraiths. The battle didn't go his way and then in my turn I deleted both the Fyreslayers and Pistoliers in my turn with Lady Olynder's various forms of output. I also charged my Black Coach into the Gunhauler and and took that out and all but one Endrinrigger. I got my Hexwraiths over his Ironbreakers and into his Irondrakes with a wave of terror, and deleted the unit. My Reapers deepstruck in front of his Ironbreakers and got off the charge thanks to Cogs being activated. They went to work.

At that point, my opponent conceded knowing he had no way of scoring any other objective other than his own, which I was working through. We played another half turn just so I could claim my secondary of killing his general.

I'm not sure if I made the right decisions with the turn giving away, but still took a fairly easy win. This opponent was really there for the narrative of his army and just for fun.

Once again, the unit 10 Hexwraiths, Reapers, and Lady Olynder just did a ton of work. I forgot to even mention my Harridans, who came in to get numbers to take the objective away from the Fyreslayers and Pistoliers. The Black Coach was really versatile with its speed and run and charge to fly from one side of the board to another to be where it needed to be. I also forgot to mention that the Krulghast came in with the Reapers and gave them a 5+ save which led to me not losing only a single one to the Ironbreakers.