Keldimir looked over at the Spirt Torment and checked that he was keeping the Chainrasp Horde in some sort of order and was pleased with what he saw. Without his brother Gathus at his side, Rasark was a sharper and stronger Gheist. Nagash had seen the constant and deep-rooted hate that each brother had for the other in life, and when the time was right, he took their souls and made them fight together in the Reaper Brigade. Forcing them to be near one another so that their hate made them fight harder but, on this occasion, Gathus had been summoned by Lady Olynder and when the Mortarch of Grief herself called, you went. Rasark was stronger without him.

Keldimir looked back at his charges. The Spirit Hosts were writhing around, moving in and out of each other, the wisps changing to form faces twisted into grotesques visages of pain and torment. They stayed near, him captured by his aura. Waiting for his commands. Two Chainghast also floated nearby. Strange gheists that seemed to be almost catatonic until something was in range and then they would shoot out huge locks and chains as they approached, turning into frenzied whirlwinds of pain and injury when engaged with the enemy.

The Reaper Brigade had been travelling through Ghyran from the Necrotic Edge to Witherdwell when they caught sight of a small Beast Herd. Keldimir’s forces were also reduced. But the will of Nagash is overpowering and when the enemy are seen they are to be killed, their souls returned to their rightful owner and for Death to be a step closer to ruling the 8 realms.

With the Spirit Hosts laying low in a small arcane grave yard and Rasark slowly moving through an old building that would cause even the greatest fighters to lose their bravery, Keldimir moved to look at what the herd consisted of, his steed clanking on the bit. Looking for a weakness, waiting for the right time.  To the left of some Wyldwoods were 20 Bestigors. To the right of the trees there was a Ghorgon, a huge monster that was pacing up and down, bellowing and snorting. Scraping at the floor with his boulder like hooves. Near to the Herdstone was another 10 Bestigors, a Great Bray Shamen and the Beastlord.

As he watched, his steed exhaled sharply and let out a low whinny. Thee Beastlord turned and look straight at them. His beast senses keen from centuries of fighting. Keldimir saw the beast’s nose wrinkle as he sniffed the air, and then he bellowed. A sound that alerted the whole herd and they all looked towards him. The fight was on.  But he was ready for all are one in Nagash, Nagash is all.

Keldimir watched as the Beastlord, with 10 Bestigors beside him ran towards the ruins with Rasark and the Chainrasps. Had Keldimir been human, he would have been terrified of the banner held by the unit. It was decked with Stormcast Armour and weaponry, Sigmar’s Troops, the most heroic of souls, stolen from Nagash and so it would have served an awesome sight, but it was of no use against his Nighthaunt. As for how to defeat them, he knew they needed to hold this building if they were to be victorious. Rasark, thinking as one with the rest of the Brigade. moved his Chainrasps to hide inside and all 20 floated into a defensive formation.

On his right, 10 more Bestigors ran around the Wyldwood towards the Graveyard and the Ghorgon started to walk towards them too. The sounds of war urged Keldimir onwards, bellowing, and bleating Beasts, the thunderous sound as the Ghorgon walked towards them, snarling and roaring. Any mere mortal would have been intimidated but The Reaper Brigade, as diminished as it was, were not.

Suddenly, the Chainghasts wailed and came to life, the Ghorgon was in range. They attacked, padlocks as big as human heads flew out on ethereal chains big enough to dock ships in the high seas, smashing into the Ghorgon as he tried to swat them away. Some of them hit, tearing huge chunks of flesh from his side but a monster as big as the Ghorgon would take a lot before it stopped.

A clash of weapons, echoing from the building to his right signalled the Bestigors clashing with the Chainrasps. From what could be seen from his vantage point, it looked like the Bestigors had left their General behind. 10 Bestigors were no match for 20 Chainrasps and Rasark, so Keldimir turned back as the Ghorgon reached the Graves. The Spirit Hosts screeched and clawed their way to the Ghorgon as he attacked the Chainghasts, angered by the wounds he had suffered. His blade like hands and slavering maw ripped into them and they screamed and fled as they were defeated, he turned his attention to the Spirit Hosts and attacked them over the walls, ripping them to pieces too. The last one of the three flew towards the Ghorgon and with his blades and claws, the Ghorgon took further injuries. He was beginning to slow down, blood pouring from his wounds.

The Chainrasps had torn the Bestigors to shreds causing the last few to run away, partly because of their losses but also due to the old terrifying ruins. Keldimir, seeing the time as right, played the ace up his sleeve. Another horde of 20 Chainrasps had been making their way to the Great Bray Shamen at the Herdstone via the Underworld. They came out of the ground and moved towards the Beast Wizard as he sacrificed Ungors to his own Gods. Keldimir scoffed at the futility. All are one in Nagash. Nagash is all. The Beastlord stopped in the middle of the battlefield. Too far from the Bestigors to save them, and so would end up facing 20 Chainrasps on his own, odds he was old enough to know were way off. He turned around when he noticed his Great Bray Shamen stop chanting and sacrificing just in time to see him be dragged down into a sea of ghosts.

A huge bladed hand then caught Keldimir on the side of his head, tearing the cheek piece away and stunning him, even being ethereal, he was not immune to being wounded or feeling pain. He turned, raising his Sword of Stolen Hours up. Stopping the next attack and the next. Rasark, seeing his General in combat, raced over and engaged the Ghorgon too. The distraction was enough as the Knight of Shrouds found his composure and cut and sliced his way around the attacks of the Ghorgon. It bellowed and roared in agony, as it slumped down onto its knees, collapsing to the side and lay against the wall of the graveyard. Its eye wildly looking around as it breathed its last breaths. Blood soaking the ground. It bellowed again refusing to die. It kicked out, trying to stand but it couldn’t. A pitiful wail. A final breath and then peace.

Keldimir looked around. The Beasts were defeated. The 10 Bestigors to the left had just made it to the Graveyard as the Ghorgon was killed and so turned and run. The Beastlord had left too, his forces depleted, he would no doubt cower in the woods and forests and rebuild. Keldimir called his forces and continued his march to Witherdwell. 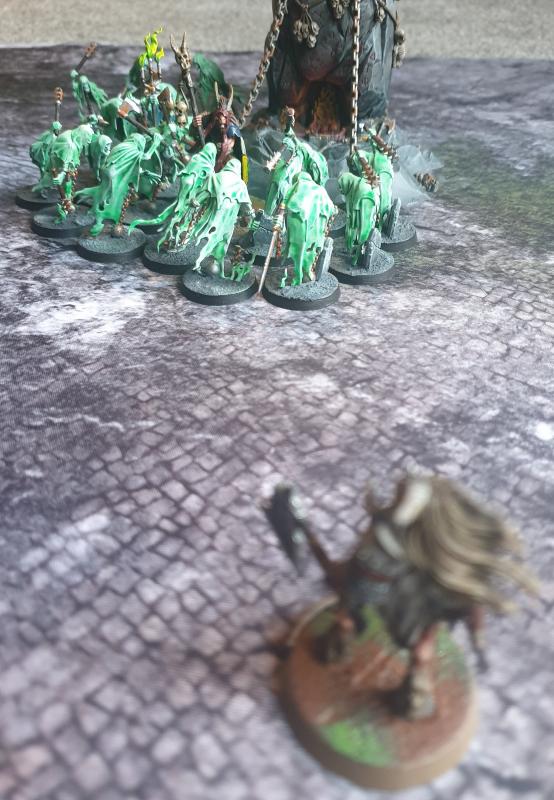