The Stormcasts stepped out from the forest, shaking leaves and twigs off their once immaculate armour. The Lord Arcanum shouted orders as soon as he saw the Mutiliating Brayscourge in the burning ruins and like a well-oiled machine, all the parts moved as one, forming into defensive units.

Molgrur watched as the enemy lined up. Years of fighting them had meant he knew what they were called. And how to kill them. He studied the formation. Evocators, flanked by Knight Incantors, at the front. Sequitors behind them and covering the flanks as a Lord Excorcist stood near the Lord Arcanum. Molgrur curled his lip and snarled in anticipation. This is what his herd needed. A test of their strength and a meal worthy of Morghur himself to fulfil their blood gorge needs.

As soon as they stopped moving, Molgrur gave a bellow to signal that the battle was to start and as one herd, using their animalistic minds to work like a pack, they started to move through the ruins. His Raiders, Gors and Bestigors flooding out, Hell-Maw, Night-Fury and Rune-Bane behind them with Knarkor following. The chants from Maogthaz, were getting louder and louder from behind him, as were the bleats of the sacrificial Ungors, as  their throats were slit into the herdstone. Talloc was nowhere to be seen.

Molgrur watched as the Raiders let loose with their bows but the arrows bounced off the gleaming armour and caused few injuries as the smell of blood was only faint on the air. The Cygor almost screamed as he  threw a rock into the lines of Stormcast but they just stepped aside and let it crash harmlessly into the forest. These were the Stormcast he had been fleeing and his fear was know anger. He wanted revenge. Molgrur would give it to him.

Seeing the arrows fly, the first beasts raced to the Stormcast lines and then crashed into them. The long line of Bestigors charged into the Sequitors, a Knight Incantor and Evocators. Their frenzied need for blood gorge was too overwhelming though and they started to lose their focus, only causing a few wounds as they thrashed around. Molgrur bellowed orders but it was too late, the Evocators, minus one who was laid on the floor, crushed and bleeding, fought back and then there was a blinding flash and an ear-splitting crackle of lightning that forced even Molgrur to close his eyes. When he opened them, all the Bestigors were dead, burned, smoking, and still convulsing from the celestial arc.

The Stormcast rallied behind the Evocators and their show of power and they dug in, overconfident in their armour and power. waiting for the beats to attack them. Molgrur saw the opportunity and despite the bodies of the fallen herd burning, he raced on, forcing the others to race in too as the Raiders and Cygor launched more rocks and arrows. The arrows still seemed ineffective but this time, the rock caught an Evocator, splitting his armour and making him bleed profusely, the blood ran down his arm and dripped onto the floor. Molgrur could feel the tide turning, the blood, the noise, and the chaos were all building up to a crescendo that was pushing the herd on, Maogthaz was still sacrificing the Ungors and it wouldn’t be long before any other Beasts that could hear the battle and feel the power of the herdstone would join in, trying to feed their own blood lust.

As one, the herd reached the Stormcast line. The Gors had charged the Sequitors to the left and had been joined by a new band of Bestigors fresh out of the forest. Hell-Maw was to the left of Molgrur, who was engaging the Knight Incantor and Night-Fury and Rune_Bane were to his right, attacking the Evocators.

Molgrur attacked with his mutating gnarlblade and the Knight Incantor had no reply and was dead from the Man-Ripper axes, cut in two. Molgrur picked up the top half of the corpse and threw it into the air, bellowing and bleating. This grisly trophy gave the herd the impetus they needed and unit after unit fell. The Bestigors killed the Sequitors with the Gors. Hell-Maw and Night-Fury were slicing with their blades and eating whole anyone who got too close. Rune-Bane’s massive horns were tearing into everything they could.

As the fighting slowed, it was difficult for Molgrur to tell who was winning, The Multilating Brayscourge had lost nearly everyone, Rune-Bane was laid one his side, swords sticking out of his neck and chest, no longer taking any breaths. Hell-Maw and Night-Fury were both mortally wounded and would die from their wounds at any time. The Lord Arcanum had run around his troops during the fight and was being swarmed by the Raiders, but they were no match for his armour, his sword, or his Gryph-charger. From the rear another unit of Sequitors had arrived, called down from the heavens.

Molgrur, turned his attention back to the fight just in time to look a sequitor in the eye as he felt the blade stick into his ribs. The sequitor grimaced with hate as he pushed harder. The blade sinking deeper. Molgrur, eyes wide open, tried to breathe but his lungs didn’t work. He closed his eyes and chanted to Morghur. Night-Fury cried out in pain as the Beastlord died. But it wasn’t the end. The ground underneath Molgrur's body started to move and then raised up and split as a Chaos Spawn claws tore their way through the mud. Born from the ground, Molgrur’s blood had given it the energy and chaos it needed. It leapt out of the ground and ran towards the Lord Arcanum. Maogthoz smiled as he watched Molgrur achieve the highest reward from Chaos itself.

Maogthoz carried on looking around. He was now the leader of the herd. There was nothing left. He watched as the last of the Gors were killed. The Bestigors were down to only a few beasts. Hell-Maw collapsed as his life finally gave way. The raiders were no more. The Chaos Spawn had disappeared and was no longer in view.

It was over. Better to fight another day than to die in this one. He bleated the retreat call and as the herd followed. Battered, bloodied and decimated. But not destroyed. It would grow.

The Lord Arcanum looked over his troops. His Chamber was decimated. He’d won, but at what cost. 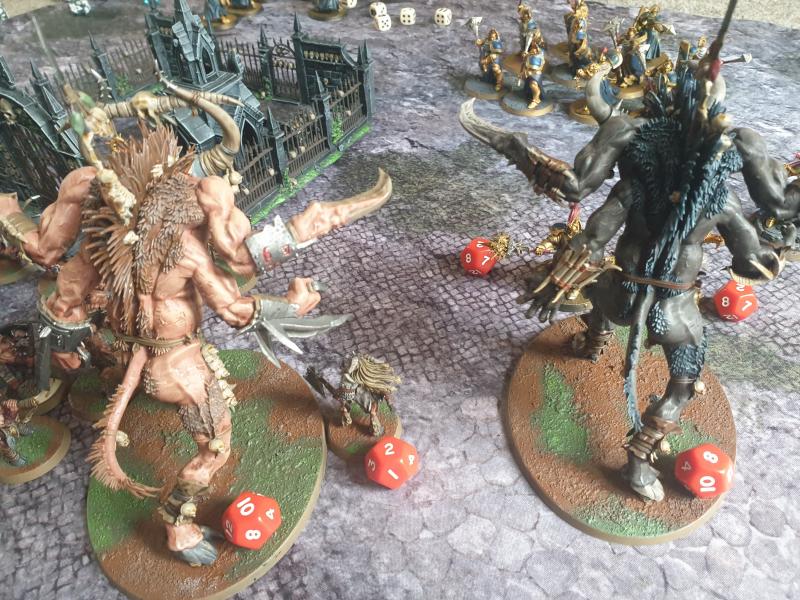