The Mutilating Brayscourge had stopped to rest in the ruins of an old Azyrite style palace on the edge of the Kindling Forests. They had been travelling for 3 days and with the herd expanding almost daily, chasing, and catching wild animals wasn’t enough to sate the blood gorge which had been growing to the point where the herd was becoming restless and wild.

As they travelled, they had been joined by another Great Bray Shamen who had been leading 10 Ungor Raiders after they had fled when their herd had been routed by a Stormcast Eternal army ordered to take control of Vitrolia. They had been welcomed in to the herd as Molgrur needed more Raiders, beasts who were so fragile compared to the other herds that replenishing them quick enough was becoming difficult. Talloc, the Shamen, on the other hand had had to earn his place and it was only his ability to cast Vile Tide that kept his attackers at bay for long enough that had let him be accepted. He was part of the herd for now, but he was going to have to work hard to not find himself being sacrificed at the Herdstone by Maogthoz in the future.

Molgrur leant against someold and rusted railings as his eyes darted all around, looking for threats, enemies both from outside, and within, the herd. He never knew when or where the next challenge to his leadership would come. He snorted and flicked flies away from him. The hairs on his neck bristled and he felt a vibration in the ground. Something big was coming, it sounded like it was coming from the forest. He lifted his axes from his belt as he stood up. As he did so, he picked up a sound. Birds flew out of the forest, then 2 deer burst out of the undergrowth, fear in their eyes. Molgrur started to gallop towards the noise, he had learned to face any threat head on. Just as he neared the edge of the forest a Cygor bellowed in fear as it burst out of the treeline, snapping tree trunks like saplings. Molgrur called for Knarker, the herds monster herder and then stopped directly in the path of the Cygor. An 8 foot tall Beastlord facing down a 60 foot tall bright blue Cygor with a rock held aloft was not something you saw everyday but Moglrur knew his power and aura would calm the beast enough for Knarkar to use his powers to bind its mind to his will.

The Cygor roared at the insignificant obstacle stood in the long grass. Nothing could stop it. It had to run. Its life depended on it. As he got closer, the fear causing him to flee suddenly vanished and was replaced by a more primordial, almost prehistoric, feeling of servitude and mastery that resonated in its mind as if it was something he had known all of its life. The will of the Beastlord was all encompassing and powerful. The Cygor would have killed himself if he had been commanded to. The fear that had just consumed him was gone.

The commotion had woken the rest of the heard who were now stood alert, weapons to hand, senses straining. They all felt the will of the Beastlord, and then felt the Cygor, now named Rune-Bane by Knarkar, join the herd. The monster's conscious becoming part of theirs in some way. They all saw what he was fleeing. As one, the herd tensed and looked towards the forest.

"READY YOURSELVES" brayed Molgrur as a golden clad warrior stepped out of the forest gloom. 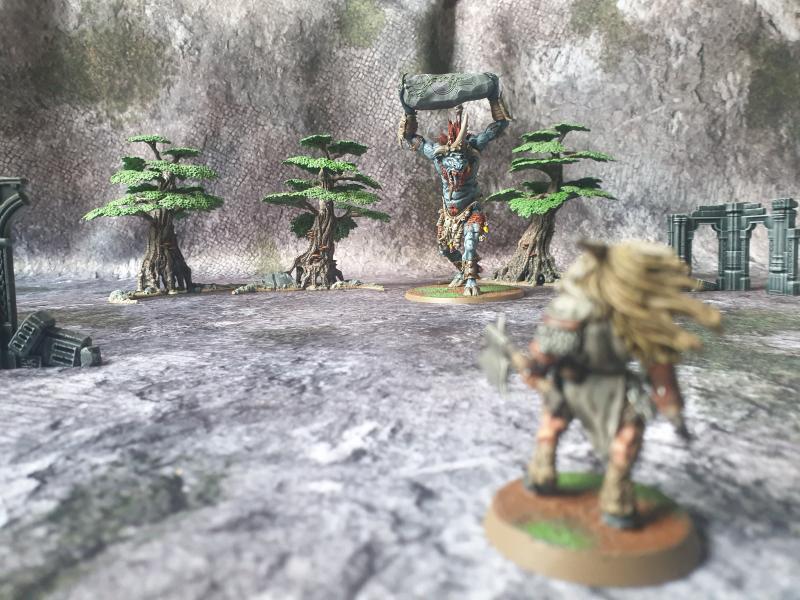