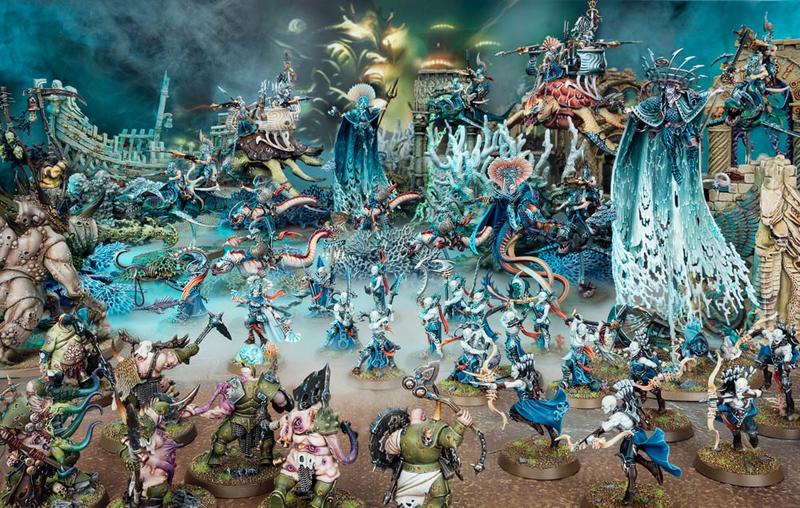 March has been a bit of a painting disaster - is it possible the wheels are falling off the challenge...? I have dropped off my model a day target so I need to claw it back somewhere. I managed another 10 chaos warriors for the Nurgle force, as well as the Darkoath Warqueen to act as their leader. She has come out really well and I am super happy with the conversion. I also finished a couple of the Pusgoyle Blightlords. And finally I managed to get through Horrors 20-25, meaning I only need to complete another 5 to have my three units of 10 completed. Lets hope they get done in April! I need to pull myself back on track, or at least get through some bigger models. At the moment I am finding it hard to get the painting time in due to being back at work and also watching the Commonwealth Games!

I managed three games this month, all at the Coalescence Malign Portents event run by Steve Fotte and Jimbo at Warhammer World. I took the Tzeentch, and it was probably a little towards the tougher end of the builds at the event. Even holding back some of the models the Tzeentch are still so strong, particularly in a narrative event. I enjoyed the games a lot however, and the army managed to win the best army award at the event so i got a rather nice GW certificate which is up on the wall. I think if I di another narrative event with the tzeentch force I think it will be more appropriate to roll out the horrors, chariots and warriors rather than sky fires and a lord of change!

This month I picked up the Daughters of Khaine book as well as a Changling, but that is all. A good month....

...however as you can see from the image at the top the Deepkin are coming, and I have my eye on these guys as the next Order army

We had a rather fun personal holiday over Easter, taking the boys to Linclonshire and visiting Tattreshall Castle as well as doing a few fun play areas and farms. The boys had a great time swimming and playing in the hot tub too. School is going OK, its getting hectic now that GCSE's are creeping up, but summer hopefully is just around the corner. We managed one basketball game, but we got beaten and finished tied for first on points, but ended up in third due to points differential. I have to say I had a shocker in the final game! I also picked up a rather annoying calf strain that kept me out of running action again. However some regular physio seems to be sorting it out nicely.