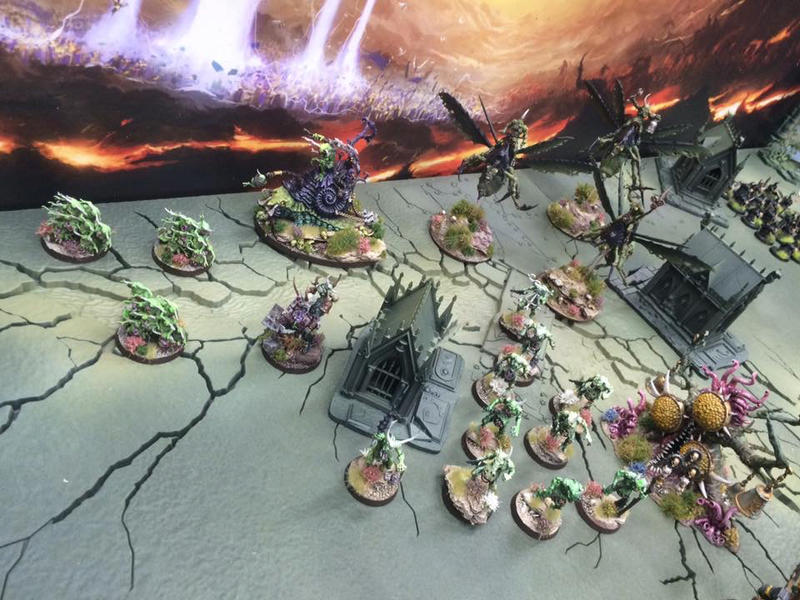 February is over and its been a bit of a mixed bag. I missed my painting target of a model a day, ending up with 24 completed models. Most of these got done in the first half of the month and then there was a bit of a lull. I managed to do some consistent work, but I didn't really finish everything. As the end of the mon th rolled ever closer I had ten warriors that were almost done (just the weapons and the bases to go), and I also completed a Blightlord fly, but haven't done the rider or the wings yet. They should be done soon. I didn't have a model that I thought was worth submitting to the PMP this month either. However I did enter the first part of the Malign Portents painting competition at my local GW in Rotherham and was voted as the winning army which was pretty sweet. For me though it was just nice to be able to support the store and get involved in the event.

I've entered the South Coast GT in May and the NEO Coalescence event on the 17th March that will be themed around the Malign Portents. I will be using the  Nurgle army for this. I managed one game which was against the Legion of Nagash using the Nurgle army. I had the Glottkin out for this, and the game started well, but I got undone by the sheer resilience of the Undead force which kept regaining wounds and models despite me killing off the characters quickly. I was impressed with the Nurgle speed and resilience, once again the Glottkin died super fast and I struggled to redeploy the army after a strong initial first two turns. In the end the Legion of Nagash was a strong victor. I was really amazed at how good 40 skeletons

I bought the Legion of Nagash book as well as the Malign Portents book and cards. I also managed a good bit of selling on ebay, getting rid of a lot of older models I didn't want to use any more. This all went fairly smoothly - I had to refund one guy who bought a Helldrake that he wasn't impressed with, but I was just pleased to get rid of it. I am certainly in the green for hobby spending so far this year which is good! I also had a successful birthday haul - three boxes of Pusgoyle Blightlords, an Ogroid Thaumuturge and a Darkoath Warqueen.

On the plus side I have been feeling a lot better after my illness at the start of the year. I had a great birthday (the wife took me away for the weekend without the boys!), have got back to playing basketball and even managed a few running sessions! I'm nowhere near back to where I was, and of course the snow has hit at the end of the month and stopped a lot of training. It also forced our lease deciding basketball fixture to be postponed which was annoying as I was back and had been picked in the team. Hopefully that will be rearranged soon. The snow was awesome for the kids though and we were able to build an epic snowman as well as take   William sledging for the first time. Turns out sledging in Yorkshire is a completely different animal to sledging in Essex when I was a boy!