Recently (since Blood and Glory) I have really struggled to get my hobby mojo back again. I think I burnt myself out getting all the terrain ready. Also painting and modelling the terrain is very different to painting models, which is my real love. However trying to get back into painting has been a bit of a struggle recently. I've reworked the hobby room now, but its been a bit chaotic and trying to find time has been hard. Coupled with the lack of motivation means I've found it hard to get anything done. So, what is the solution....?

Firstly I went about fully reorganising the room. I then got out a bunch of half completed projects to tackle. Some of these are for my Wanderers Army, then there are some units to go into the Tzeentch force, and some more Nurgle models that are being done in the hope that a new Nurgle battle tome will be forthcoming.

For the Wanderers I have been planning on doing some Warhawk Riders for a while. I finally got round to finishing these off. I have had the riders done for ages, but I needed to put the hawks together. I assembled the whole model and then taped off the plastic rod so I could spray up the rest of the models. Once I got the pale underbelly done and the top I just went a bit crazy with lines to add the texture. The painting is mostly done using very thin paint and washes. You can work really quickly as long as the brush has a good point. I didn't worry about the texture on the model as a guide. I just used my own feel for where the feathery effect should go. 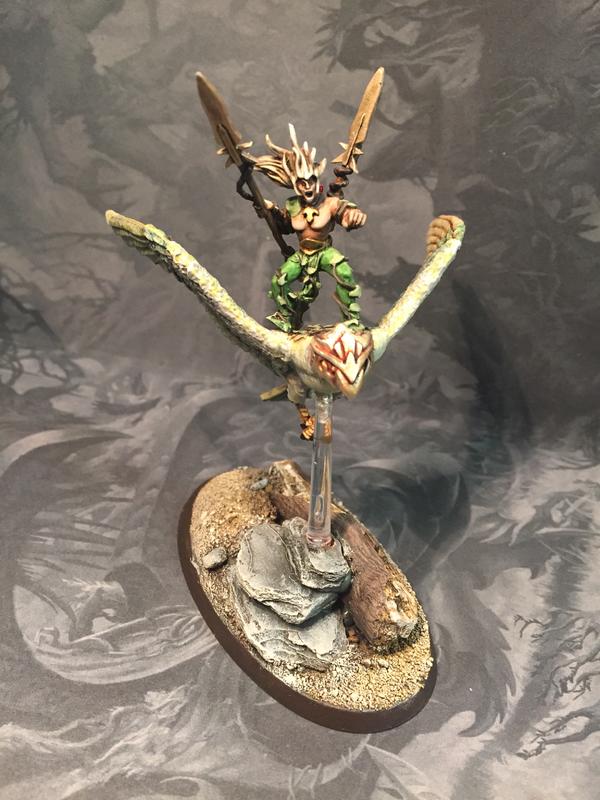 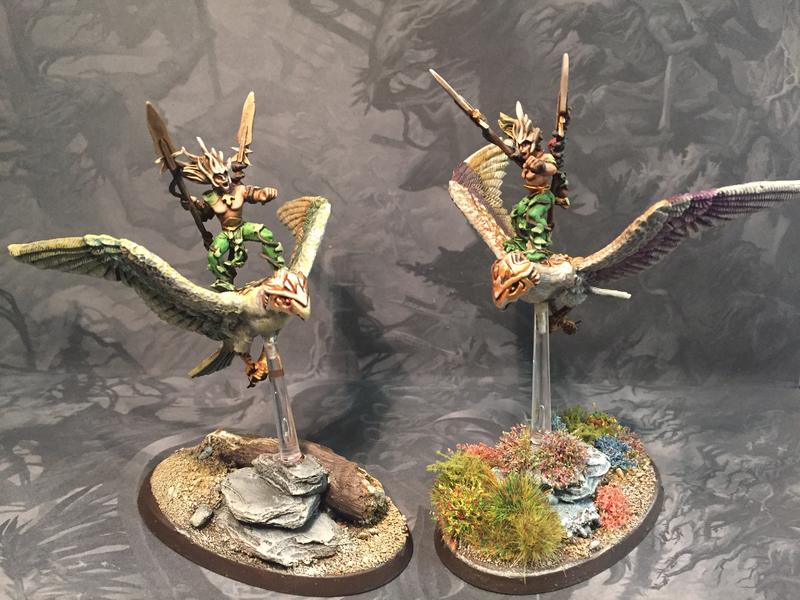 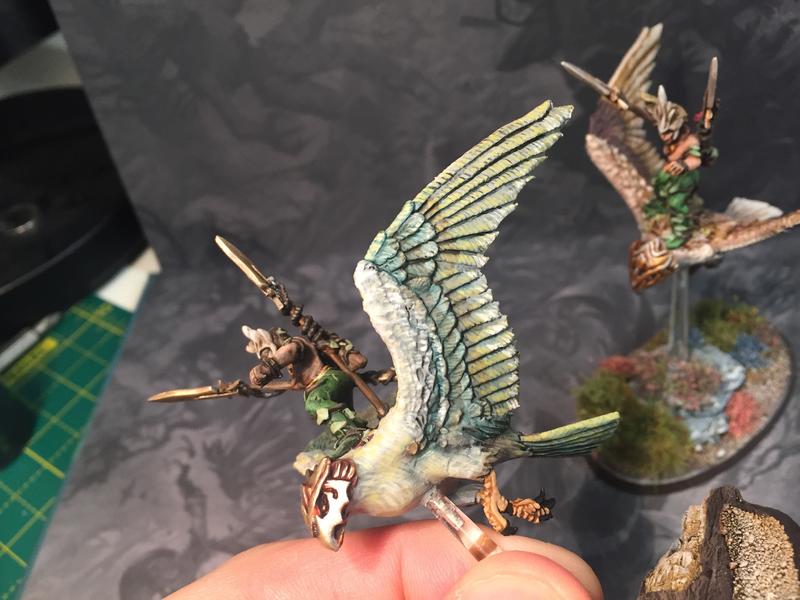 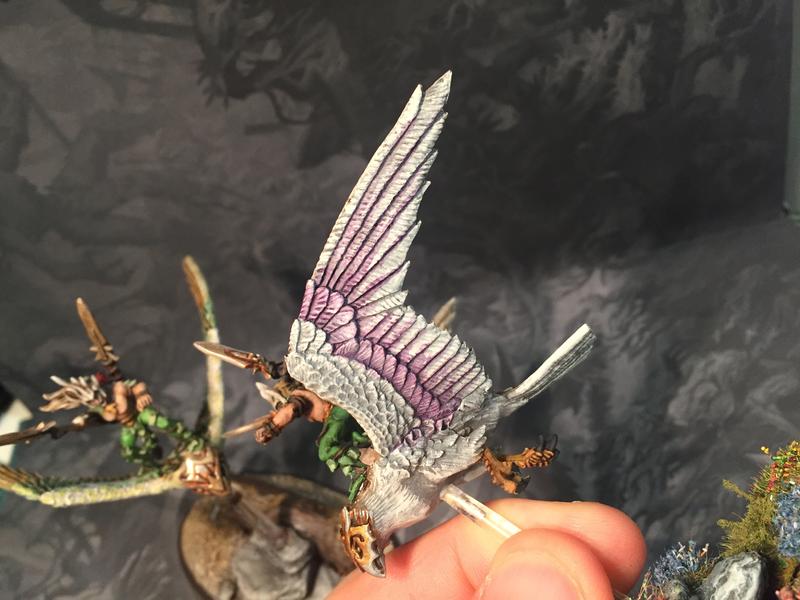 My Nurgle entry is the humble Plaguebearer. I have done 30 now which is a good number of battle line models, but I think I probably need to do another 30! This doesn't really fill me with excitement

The models themselves aren't too painful to do though. I tend to do a two tone base coat and then wash the models and dry brush them up. I can then easily vary the greens on the model to get a lot of variation in the units. After this the models get finished relatively quickly as its just a case of picking out the horns and some pustules, and then doing the gore with Blood for the Blood God. These still need basing though. 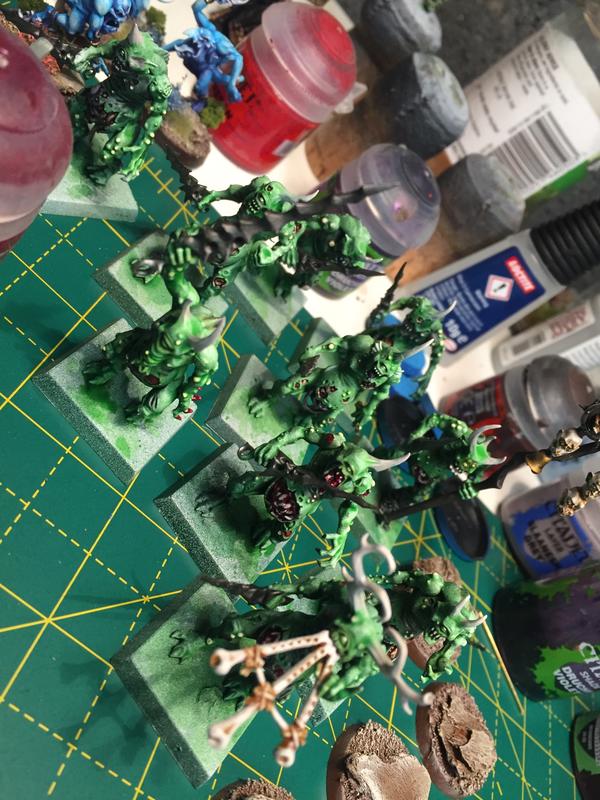 For the Tzeentch I need to increase my Horror numbers. I have the three lords of change which are all different colours, so I thought it might be nice to paint up matching horrors in the same colours. I have done the ten green ones so next up is the 10 red ones. I have base coated them brown and Mephiston red and then quickly layered on some Evil Sunz Scarlett. The beak, claws and tongues will all be picked out in white, and the red will have a final highlight of Tau Ochre to hopefully set it off and not make it too orange. The Blue Horrors have just been base coated blue and then had the highlights brought up to a bright Palyd Wych Flesh. I like these models a lot, although they are a lot smaller than I expected.

All I have left to do after this are thirty Brimstone Horrors and the army will be ready for Sheffield Slaughter and Heat 1 at Warhammer World.

If you have had your own Hobby Wobble let me know how you got over it in the comments! 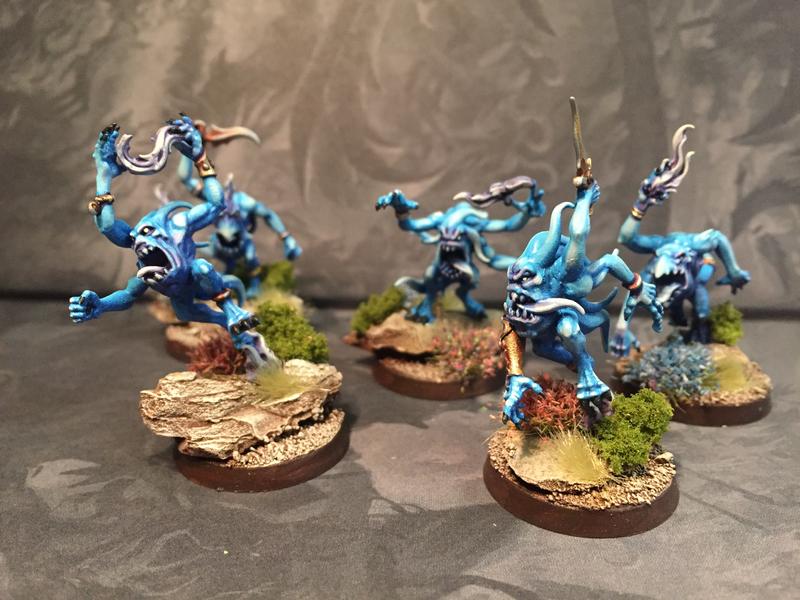 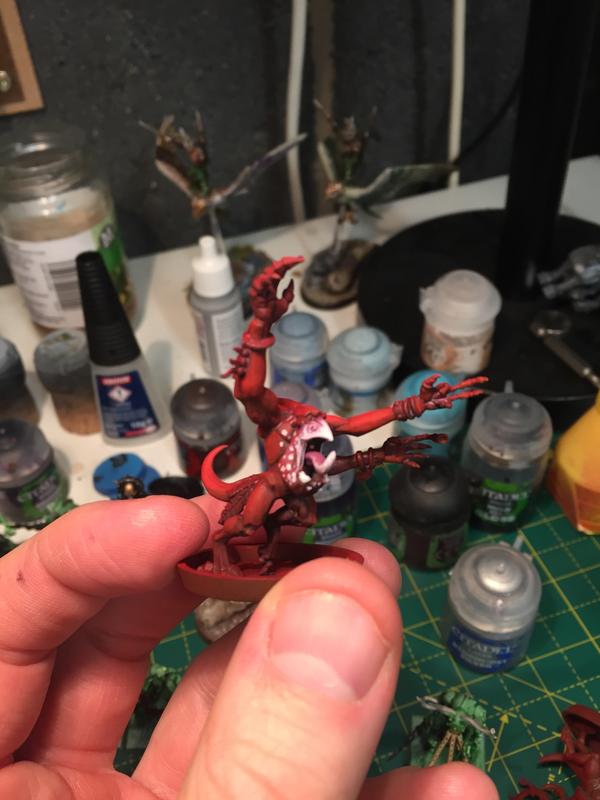 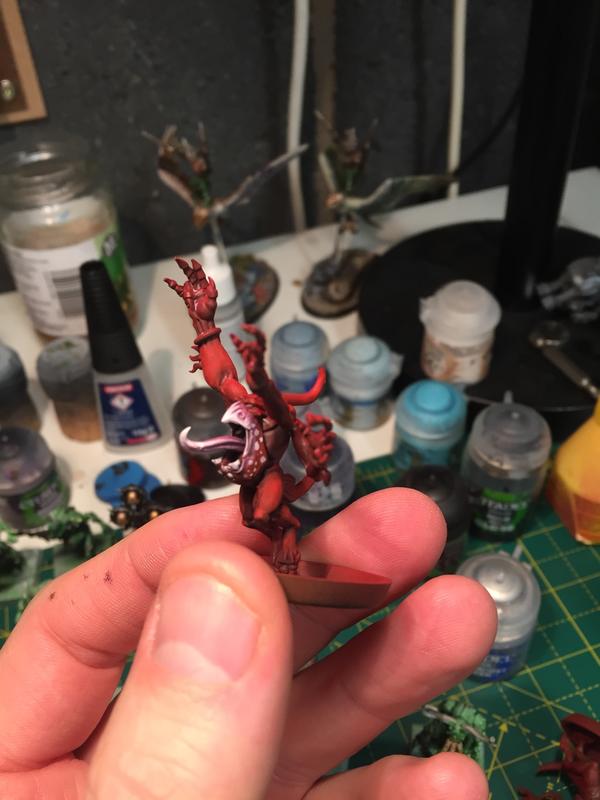