The Free City of Schwarzerden is located in the realm of Chamon in the Spiral Crux. After its original founding for the purpose of the exploitation of nearby natural ressources and magical places of power, the Schwarzerden quickly became home to one of the Mortal Realms most influential universities outside of the major Cities of Sigmar. The College of Schwarzerden is most know for its advancements in the realms of engineering, magic and above all alchemy. This alchemical know-how has also contributed massively to the wealth of the city, which is know to produce refined metals, optical lenses, porcellain, medicine and immitation gold of exceedingly high quality.

The biggest success of the College of Schwarzerden in the application of the principles of alchemy is what is know as Celestial Steel, the method of creation of which is also the city's biggest trade secret. Through the alchemical purification of what is known as Goblin Ores, raw metals that are usually regarded as mining waste and which release toxic gasses when smelted by the usual methods, the alchemists of Schwarzerden are able to obtain a crystaline substance know as lapis mirabilis (the Wonderous Stone). By introducing lapis mirabilis to steel during production in accordance with alchemical principles, an exaltation of the base steel is achieved. The resulting product is Celestial Steel, which is lighter and more heat resistant than ordinary steel without a loss of protective ability. Recognizable by its characteristic blue sheen, Celestial Steel is what allows the Ironweld of Schwarzerden to construct the superior Steam Tanks and Gyrocopters that make up the back bone of the Schwarzerden army. Lapis mirabilis also finds application as part of the propellant of the Comet's Tail rockets fired by Schwarzerden's Helstorm Rocket Batteries and in the manufacturing of the high-quality optical lenses that make the celestial mages of Schwarzerden some of the most respected outside of Azyr. 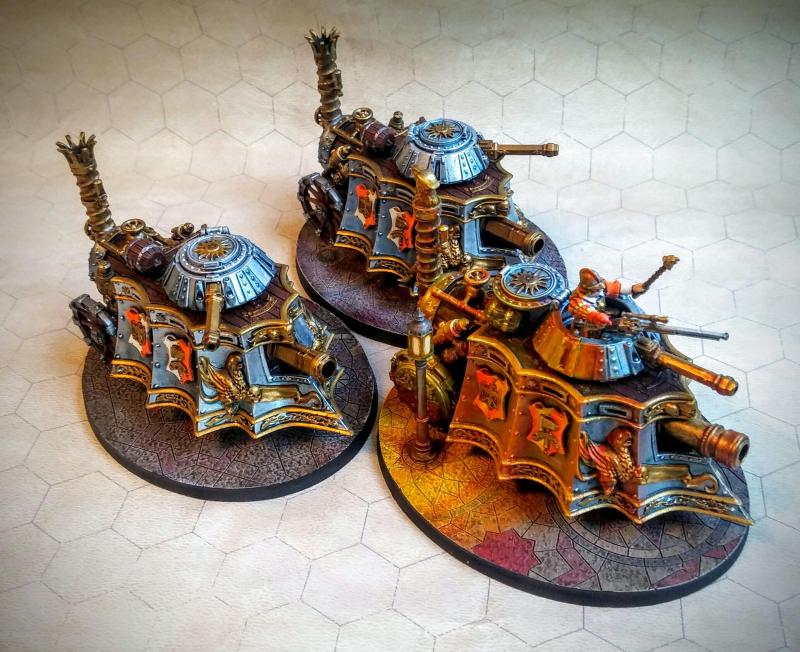 Schwarzerden is a small city-state with a population of only about 60000, predominantly humans and dwarves. Due to this, Schwarzerden is only able to maintain a single Freeguild, which is however remarkably integrated with the resident Ironweld and Collegiate Arcane. This Freeguild, the Sun's Splendor, is recognizable by its white and orange heraldry and structures itself in accordance with the same alchemical principles that govern most of life in Schwarzerden. It organizes itself into smaller battle groups in which a Steam Tank serves as the central focal point, which is then supported by a unit of Handgunners and a Gyrocopter, the function of which is to protect it against ambushes and aerial threats. After an inital artillery strike from the city's rocket batteries, several such groups are supposed to engage enemy troops in a coordinated attack, preferably on open ground, bringin to bear the huge destructive power of the Steam Tank. They are further supported with strategic intelligence and magical support by a Celestial Hurricanum and the battlemage commanding it. Supposedly, this "admixing" of different elements of warfare is an instance of alchemical "exaltation" in the martial realm, in which separate elements are combined into a more powerful whole and "transmuted" in order to gain abilities not found in the component elements alone.

The city of Schwarzerden supports a staggering amount of tanks for a city of it's size, at almost two dozen, although it lacks the manpower to field them all at the same time. While the high quality of its troops has occasionally allowed Schwarzerden to successfully engage foes much mightier than itself, the large amount of expertise and drilling necessary to implement its military doctrine makes it very hard for the city to quickly replace its troops should any of them be lost in battle. The operation of a unit of Rocket Batteries, for example, requires no less than three full-fledged engineers for every four batteries as well as several more skilled artillery men, and this is after the adoption of a "rolling fire" system which reduces the amount of crew necessary. These crews are usually drawn directly from the engineering department of the College of Schwarzerden, and the loss of even a single man might take months to replace.