This one was the most fun I've had in any game of AOS of all time.

1) Can I play cagey with doomwheels and bait my opponent into chasing them?

2) Is there a situation where a lightning cannon can be used as chaff?

3) Is the Warp Lightning Vortex still worth it? And is it still toxic to play?

CORE BATTALIONS
*Hunters of the Heartlands

BCR had no tricks and had nothing holding them back to go straight me since no objectives were on the table. Full BCR army frontlined and center. I back-boarded all 3 gnawholes in my deployment zone as a way to have heroes escape along the long edge of the table. I chose to "turtle up" front and center as well, with the intent of scattering as soon as I could see the whites of their eyes. I was also counting on this being a huge incentive to have my opponent run his entire army at me as opposed to spreading out and denying space for the doomwheels. Lightning cannon mistakingly just out of range to shoot nearest Stonehorn.

Not much in the way of magic, nothing in range, I cast mystic shield. Fails. Great. Just great. I had mis-measured and was forced to use my vigordust injector on my WLC so this it could double its movement to a whopping 6", putting it into range of the Stonehorn. Doomwheels kept as a pack and swung wide left, anticipating hope against hope an objective would land on that side and also showcasing the maneuv's and mechanics to my opponent. I also get spicy by baiting a few trucks to hunt down my exposed Jezzails sent through the gnawhole.  I was gambling that I can nuke one of them with the vortex on a later turn. Shooting phase, hot dice, on the first volley, with a 2+ power setting, 10 MW's, 2 mitigated by a ward and the WLC took 3 MW. Not bad. Jezzails are exactly 30'' away from the other Stonehorn and get 4 wounds in.

Damaged stonehorn heals 3 with Heroic Recovery (curses). The army drives straight me. Although in an interesting twist 3 trucks head toward my Jezzail bait.

My opponent heroic actioned another precious heal bringing this souped up monster truck to a whopping 10 health, everything just shoves forward, then the snowballs and birds arrived. Warlock bombadier ate dirt off the cuff, Lightning cannon stays alive by the skin of its teeth. Jezzails go to half strength. I lose my chaff wall of acolytes infront of my other acolytes and WLC. Then the charging happened. So good news and bad news. I rolled hot dice yet again on the Unleash Hell (although i couldn't overclock the WLC due to the engineer being dead and all) and put the souped up Stonehorn to 6 health. The WLC ultimately became chaff as it had kept the Stonehorn away from charging my heroes due to body blocking and a terrain piece. He charged so hard the impact hits killed my back-up chaff walls and was able to pile in to my ramshackle cannon. Meanwhile, in the corner, the other stonehorn just obliterates my jezzails serving as a very expensive chaff wall.

I already lost all 3x5 acolytes and both of my artillery. That's the bad news. All that remained in that space was a Grey Seer staring down a still kicking Stonehorn and another healthy monster truck.  Stonehorn menacingly stares down my Grey Seer general from just outside killing reach.

Miracle time baby! So I'm thinking well there's now way I'm winning this, my only real nut-cracker is dead (WLC) and there's so many more wounds to go through. I can't run these monster trucks over with hamster wheels for MW, So whats a Skaven general to do? I happen to notice that my opponent chooses to heroic recovery, magic is mine to lose. Time to nuke the place. I call out "Orbital Bombardment at my location!" and proceed to successfully cast Warp Lightning Vortex on top of that stupid Stonehorn. BOOM! The dust clears, I anticipate visual confirmation that the target is disintegrated only to find my Grey Seer bleeding out and the Stonehorn took nothing. Hmmmmm. 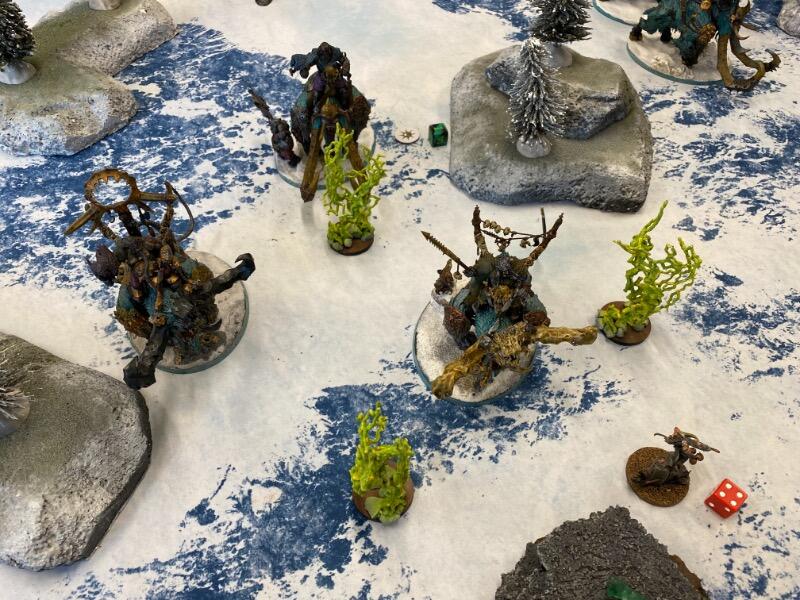 Well I have an arch-warlock, so I got that going for me, which is nice. I casually cast Warp Lightning Storm from his warscroll also nonchalantly declare that I'm overcharging it. Its my magic phase to lose like I said. For those who've never seen this spell, effectively it is up to D3 targets and each target takes D3 MWs. If you overcharge it, its D3 targets for D6 MWs! At the risk of course of taking D3xD6 MW's myself. Double Hmmm. If your not overcharging abilities as skaven you're not worthy of being called a Skaven General.

I spike a Stonehorn. 16 MW's. He's got no ward. The two Thundertusks behind him don't know what they just saw.

So what the heck happened you might ask? How is this possible? We travel to the Core Rules FAQ's 1.6 where, in its enlightenment, we find that an ability that allows for choosing multiple targets, you may in fact choose the same target unless noted otherwise (typically phrased as "different targets")

Q: Some abilities stipulate that you can pick a certain number of units to be affected by the ability. When this is the case, can I pick the same unit several times?

A: Yes, unless the ability specifically states otherwise.

So fortunately, my opponent is laughing. Thats a good sign. Already we were enjoying the theatrics unfolding with the failed nuke and just describing this recent spell potentially doing that much damage to the warlock himself. Good times. If we fast forward, during movement, My Warp Lightning Vortex triggers and puts my general to 2 health, does 2 damage to a few doomwheels and a thundertusk and finally completely missing the Stonehorn in the middle of all of it. The thing just wont die. I'm feeling frisky and send my Archwarlock back through the gnawhole towards my Grey Seer. I take a hard re-direct to centerboard with my doomwheel armada and I take some pot shots at his thundertusk also near my general, overcharging the slew of Doomwheel lightning bolts for decent damage. 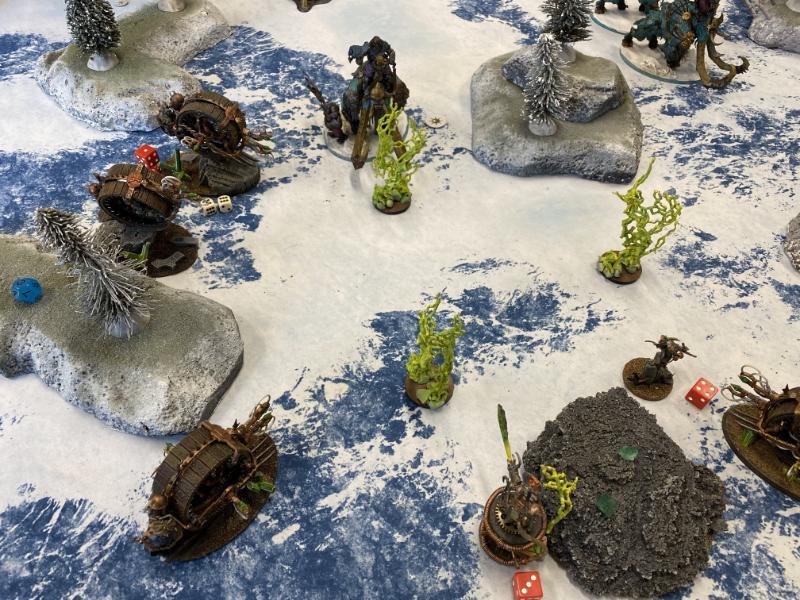 Both 2nd and 3rd objective land on opposite end of table away from remaining Skaven units.

Hero phase, I don't even bother trying to heroic recover, not with skaven bravery, oh no, we don't do that here. First cast I have my general go for an aracane bolt at that bone-head monster truck: miss-cast. My Warlord Grey Seer is at one health.

Archwarlock's time to shine. I go for the overclocked Warp Lightning Storm spell and it goes off! I rolled hot once again and split my damage between the nigh-indestructible Stonehorn and the beefy Thundertusk. Stonehorn shrugs off all but one MW putting him at 1 health left and the Thundertusk is half-strength. AHHHHHHH. I've never been so happy/mad at the same time. Lightning vortex once again pings away at several doomwheels, hits my archwarlock and the thundertusk. All doomwheels remaining on table. I surround the centerboard-ed Thundertusk shooting the ****** out of it. Its on its last legs. No charges for now. Objectives still in BCR control. 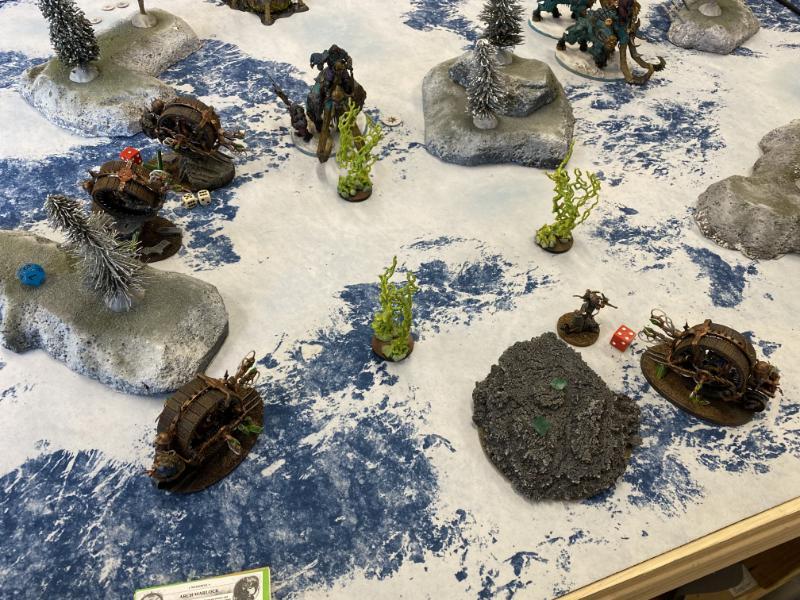 Without much options, BCR throws some birds at my archwarock, gets smackled by them putting him to 1 health. Oh where have I heard of that before? Top of movment, the vortex rears its ugly head and explodes my Archwarlock and pings the rest of the nonsense on the table. I feel like I'm taking crazy pills! All 3 remaining Thundertusks Snag the remaining objectives and hold the fort down. The one in the center charges a doomwheel and whiffs his attack rolls. Oof. Doomwheels survive.

Centerboard Thundertusk tries to heal and fails. Movement phase, the vortex finishes off the Thundertusk. The other two move to body block my doomwheels and/or crush them just out of range of shooting. While moving off of the objectives would seem counter-intuitive for BCR and clearly counting as more bodies than even two Hamster wheels combined. The base(?) movment range of the doomwheels would be well outside of making it, only with a decent move roll AND a decent charge would I have a shot, so my opponent, was being clever(?) to deny me that chance. All of this was assuming I would roll close to 14 inches for my movement. 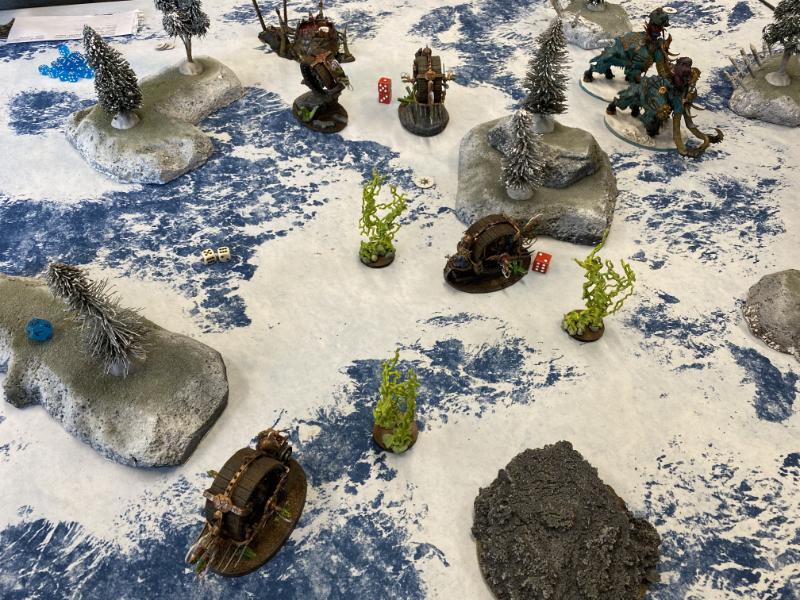 I had a need, a need for SPEED! With objectives abandoned I had a shot. I whiff two movement rolls, one of which was quadruple boxes. I would not have it, not one bit and so like the cheating general that I am, I declare a speed waagh!!, erh, I mean I overclock my generators. I declare that I'm re-rolling my movement dice at the risk of any result of a 1 on dice lets my opponent move my unit (go read the warscroll, its pretty slick). The first one I roll is hot, but with a 1 rolled, thus goes zooming off into no-mans land. The other though rolls hot and speeds 18" just around the side of one thundertusk, setting up a sick charge. The two remaining doomwheels go head long into battle with the thundertusk guarding the point in my territory. One of them gets crunched in the combat phase, they were pretty beat up to begin with. 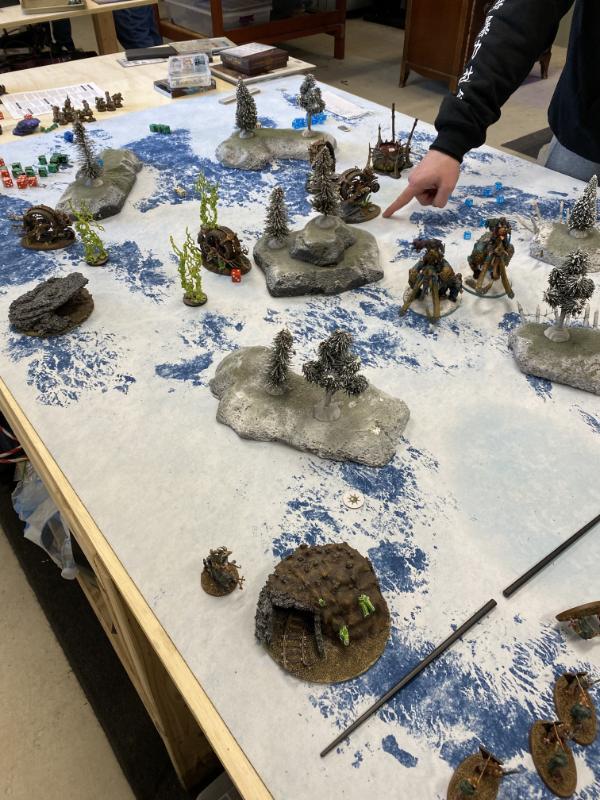 One hero recovered a bit in the hero phase, whittled own a doomwheel with a flock of seagulls, all parties involved hit like a wet sandwhich. Curious. BCR were too injured on their monster chart to retreat to the objectives. That gave me a chance. Instead they attempted to body block the lanes. 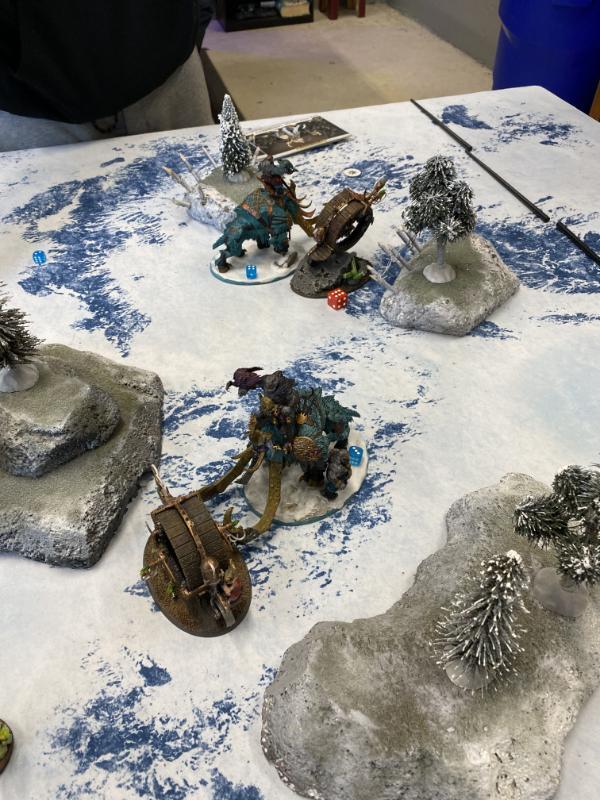 My last doomwheel makes its final push and needs a ridiculous charge to take a thundertusk and then whip around a bit to snag the objective on my opponent's side. I make a 10" charge, survive melee (somehow), I activate, pile-in 3" and take the objective in my opponents territory.

Points  ('+" is the extra monster point)

By some miracle both players achieve their Grand Strats  of keeping monsters alive and slaying the warlord. My warlord survived death, like, a gazillion times for that to go off. Even if he had that would have tied game.

All things considered, I may still have missed a few things, mistakes were made on both sides and there may have been drinking involved. But boy do I love this game!