... as I understand it is keep your key units in their buff bubbles.  I broke that rule and turned the game into a slow attrition battle that I barely came out on top of.

My opponent had more experience playing against Fyreslayers than I had playing with them.  With a double battalion they were going to have fewer drops than I would and thus would choose priority.  When they placed their big block of Arrowboyz on the front edge of their deployment zone my guess was they’d use their pre-R1 movement to get into range to try and double-tap either my Hearthguard Berzerkers or snipe out a key Hero our two.  I tried to deploy accordingly, trying to at least make them use the Hero Phase action to move the Arrowboyz into range but there was only so much depth to deploy into and I didn’t want to be completely limited my first turn if they surprised me and went first.

Well they did move their Arrowboyz forward (and the other half rounding up the army Bonesplitterz let them)... but then they gave me priority.  Their experience against Fyreslayers was against the classic Hermdar, double HB, Lords of the Lodge list so when this happened I had to ask myself whether they recognized that I had the movement with Vostarg to get in a first turn charge and they were intentionally trying to bait me into pulling out of my buff bubbles, or whether their lack of familiarity meant they’d actually given me an opening to disrupt their plans? 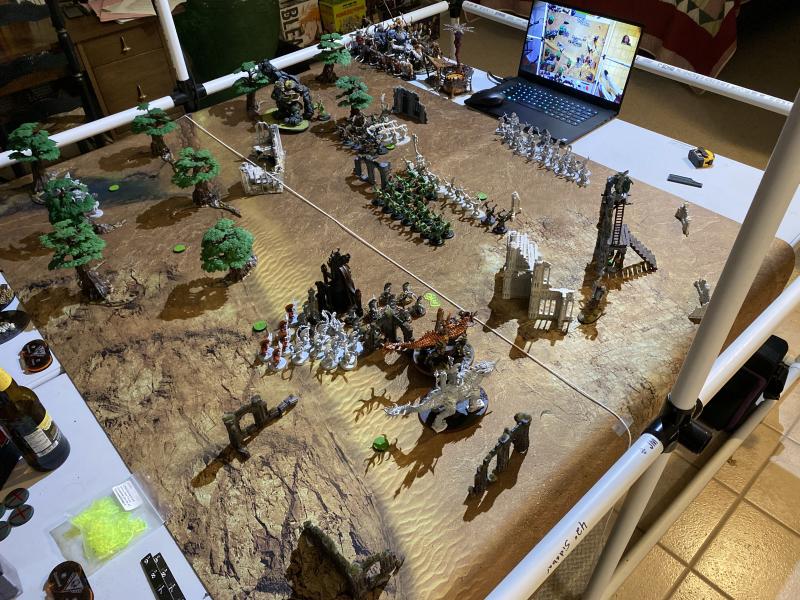 Especially with the back line now also open to bring the Runesmiter and 20x Vulkites underground with him in from behind I ultimately succumbed to temptation and ran & charged my Hearthguard Berzerkers and ambushed and charged my Vulkites into the big group of Savage Orruks in the middle.  My hope was even without the best buffs going that I could clear enough of the opposition out and, if I didn’t get double turned, be in a good position to move things up in R2 to regain the buff bubbles.  Failing my Runefather on Magmadroth’s charge in this context was particularly painful, especially when my CP reroll was worse than my first roll and cost me the alternate option of charging into his Maniak Weirdnob. 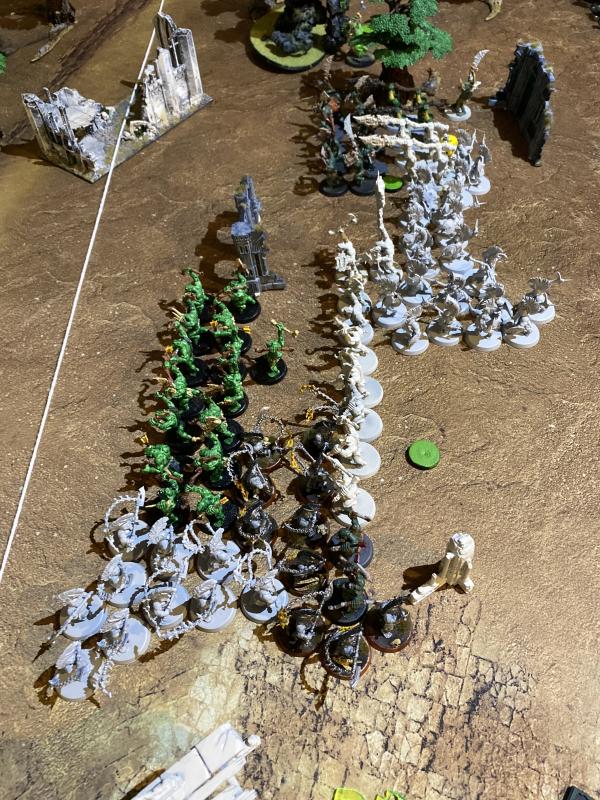 Suffice to say this was a mistake.  I didn’t do enough damage on the big block of Arrowboyz and w/2 battalions he had the CP to prevent battleshock.  As a result he still had enough left to contest one of the two objectives I was in contention for in his territory.  Simply put I fell far short of the reward I’d taken the risk of breaking my buff bubbles to get.

While they held up okay in my opponent’s turn the now buffed Maniak Weirdnob charged into my spell damaged Runefather, significantly degrading him, while largely shrugging the limited Damage output of my Magmadroths.  Meanwhile, Pebbles the Rogue Idol flew across the table to challenge my 10x Vulkites for my far Western objective.  Fortunately just enough would survive to prevent my opponent from taking the objective and forcing them to spend another turn clearing them out. 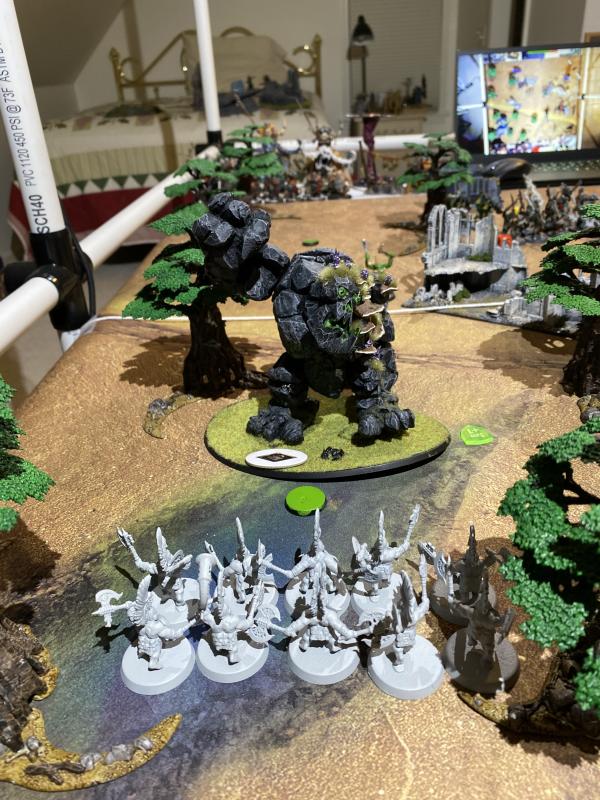 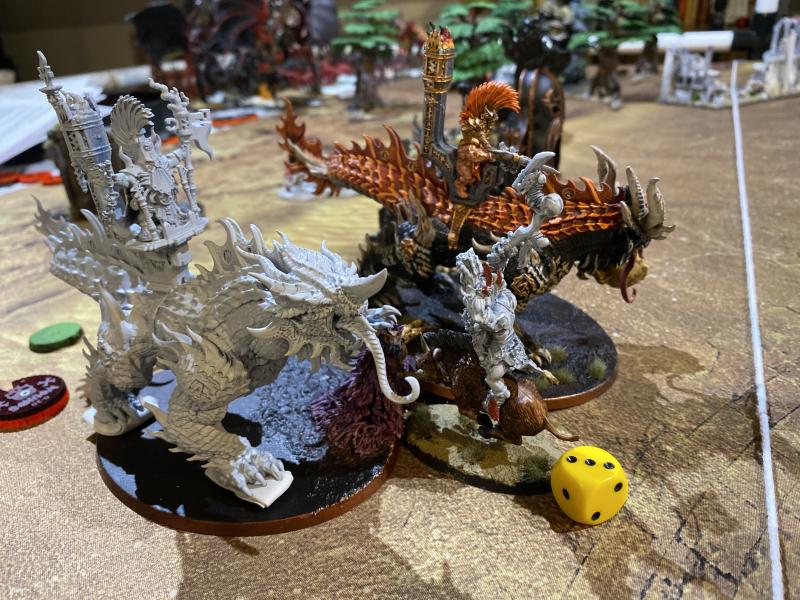 Of course they immediately got that turn, winning priority for the double-turn.  My Runefather would fall but the Runesmiter on Magmadroth would finally finish them off.  Pebbles would take and then burn my (Western Objective).  Meanwhile I was “winning” the slow attrition in the middle, but at a higher price than I would have liked.  In my second turn I’d have to sacrifice my Auric Hearthguard and a Hero setting up a speed bump in R3 to Pebbles if I lost the priority roll again (I would). While I was finally able to get some of my buff bubbles back as the Runesmiter from the Magmic Tunnel that had ambushed with the Vulkites was finally able to get in position.

It would push back and forth from there with Bonesplitterz consistently winning the priority and Pebbles rampaging in my back line but my winning the attrition battle in my opponent’s territory.  Pebbles had to burn to be able to move on as he lacked a support (until Wardok finally caught up in R4) while my eventual numbers advantage let me wrack up some extra points before I needed to burn.

Those extra VP would prove critical as it built up just enough of a lead as by the end of R4.1 my opponent was left with Wardok & Pebbles relatively uncontested  in my territory but my now unencumbered surviving Hearthguard Berzerkers ready to claim and burn my opponent’s Western objective in my turn while my Magmadroth was climbing the Bell Tower to try and kill off Wurgog.  If successful they could burn it but as long as the Magmadroth survived I’d score the objective again.  Mathematically even the latter would’ve been enough to clinch the game even if Pebbles got max points for the final objective in my territory in R5.

So at midnight there was a concession, giving me a victory I was lucky to claim given how poorly I played.  I gambled poorly early and got bailed out by Fyreslayer resilience and some fortunate Save rolls and a couple cold rolls from my opponent.  I tried to play Fyreslayers as more free wheeling then they were meant to be played.  Won’t get away with that next match against Mawtribes.