A quasi-rematch and given the battleplan was essentially the proto-Starstrike we decided “narratively speaking” this would just represent another portion of the previous battlefield and thus used a similar set-up.   Learning from the previous match while sticking with Khorne Brass Despoilers, though adding a Doombull,  as the foundation of their army they switched from Darkwalkers to Gavespawn and switched out the generic Brayherd Shaman  for (proxied) Grashrak Fellhoof and his Despoilers.

In turn I switched from BCR to Gutbusters running a Bloodgullet list centered around the Goremand battalion plus a Butcher and Balewind Vortex. 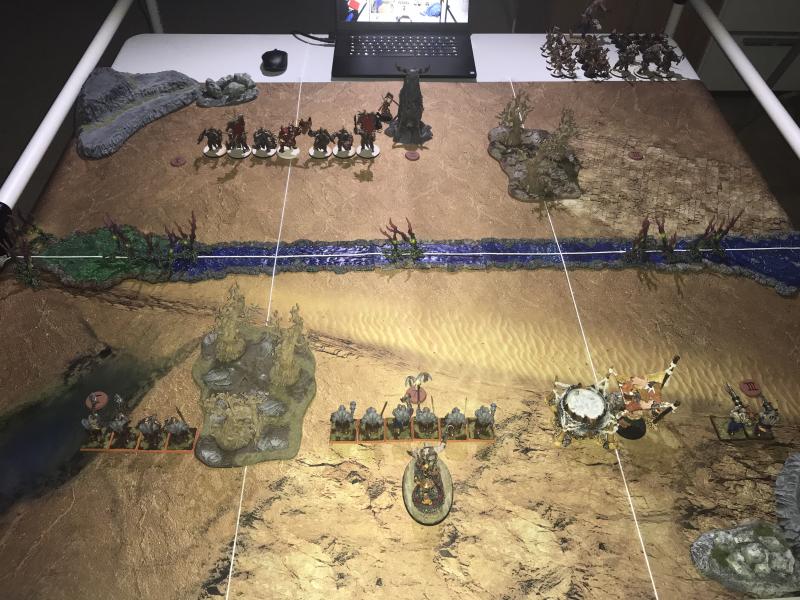 I had fewer drops and decided to let BoC go first after again screening my back line against the Bestmaster + Bestigors’ Ambush I knew was coming.  They came in on the East side (left in picture above) but only the Beastlord made his charge into the Leadbelchers.  But he had more than enough to wipe them out. 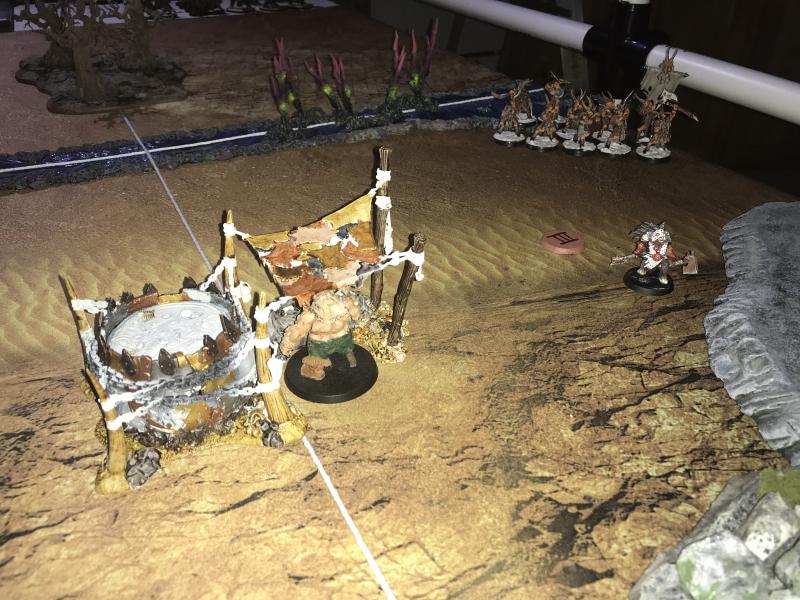 Again, this left me with a choice given my Butcher (loaded up with the Wizardflesh Apron and hoping to keep him around the Mawpot on the Balewind Vortex to get the +1 on all four of his spells) was now completely exposed.    With the Bestigors able to run & charge wasn’t going to be able to hide the Butcher and still keep him by the Mawpot.  So I moved my big block of a Gluttons over and they charged the Beastlord.  With some nice Gut Lore debuffs on him even though I didn’t get all of them into him was able to take him out but... Gavespawn went off and a Chaos Spawn took his place ensuring my Gluttons were still pinned. 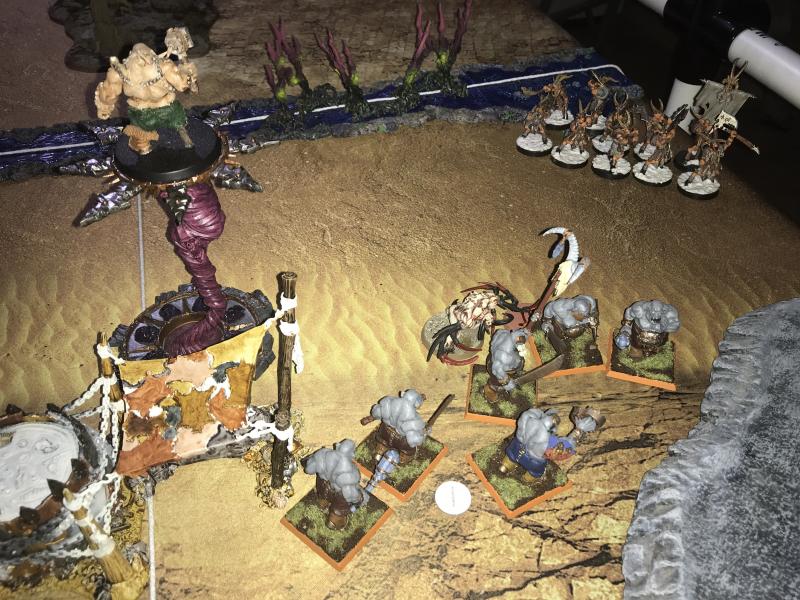 Now arguably keeping my Butcher behind he Mawpot would’ve been better but with run and charge there was still a good chance the Bestigors were getting there.  And I was really hoping R2 to be able to hit he Bullgors with Voracious Maw.  Unfortunately it got unbound R1 so I didn’t get any damage into the Bestigors.  This, and arguably no getting the -1 to hit onto them, proved to be a mistake.  But there had also been  the possibility for a double-turn in the back of my mind  (little did I know I would lose all four priority rolls...) which would’ve allowed me to clear the spawn and better screen my Butcher.

It was not meant to be.  BoC had their objective drop right next to their Bullgors.  Mine dropped in the center.  After BoC won priority the charge was on.  With the charge the Bestigors were getting +1 attacks and with the Chaos Spawn in range they could use the Gavespawn CA to add another.  With 41 attacks they were able to wipe out my Butcher... 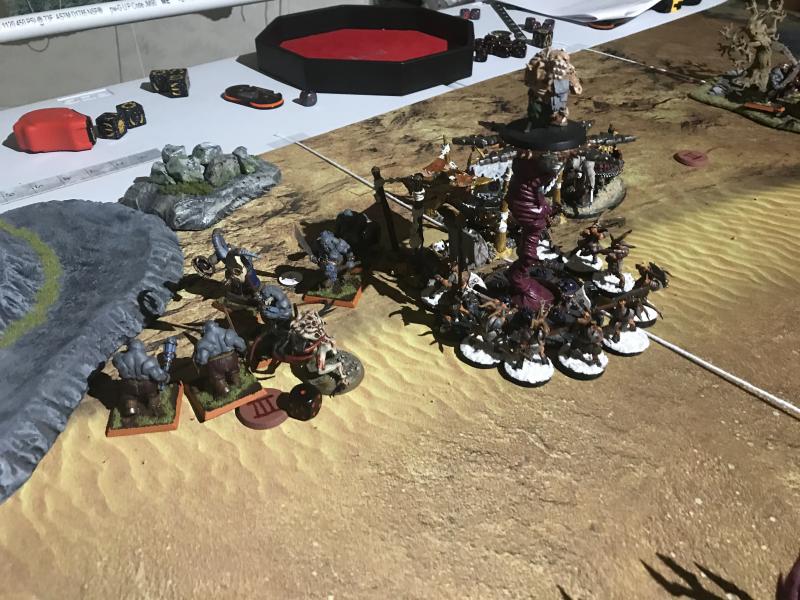 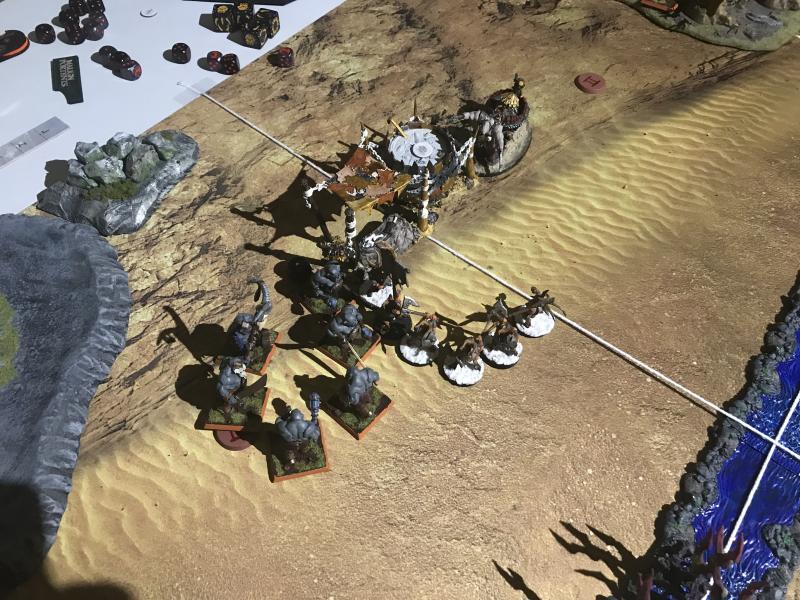 I would manage to clear off the remaining Bestigors in my turn but my opponent would be able to summon more to keep me occupied on that side leaving me with basically my Ironguts to hold the center objective.   The river (half movement) slowed the Bullgors down allowing me to get an opportunistic charge in R3.2. 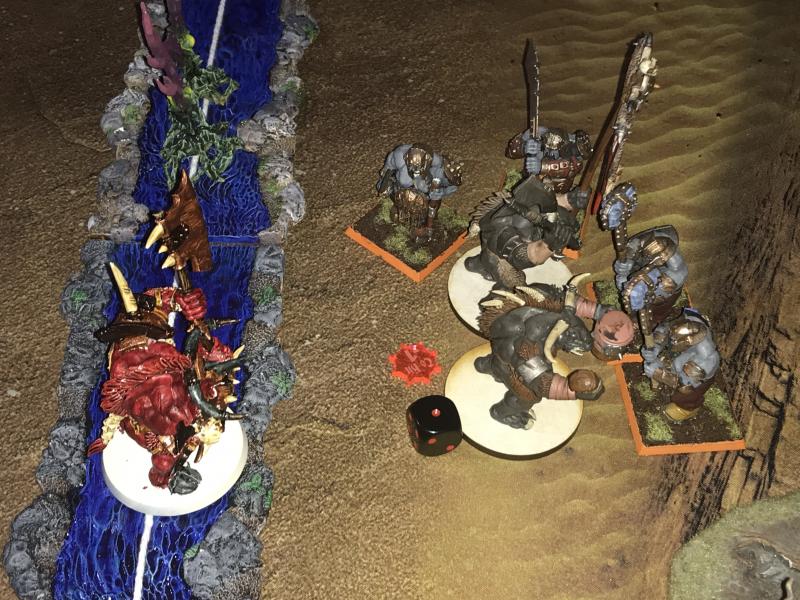 But didn’t do enough damage providing time for the Doombull and other Bullgors to get in the next turn as well as Grashrak to do some damage. 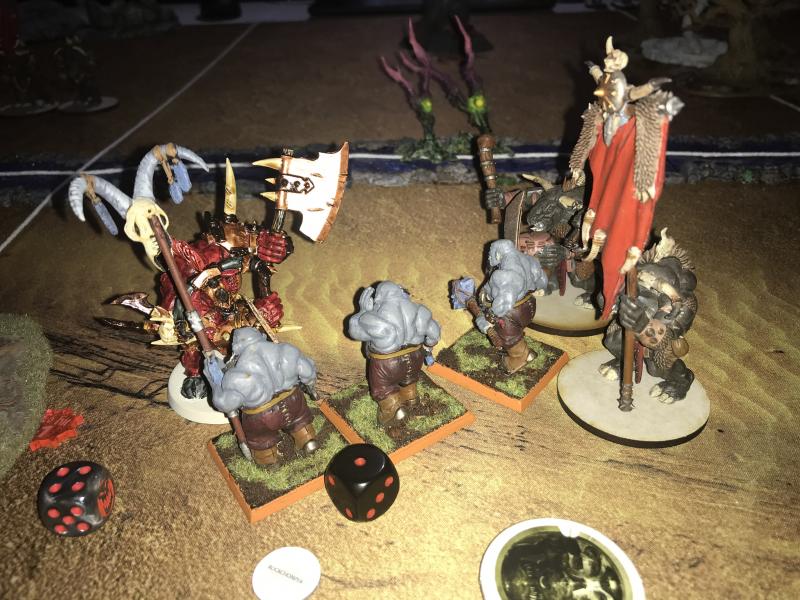 When I lost the initiative yet again my opponent was able to kill off my last Ironguts and claim the objective.  With no way to even the score I conceded. 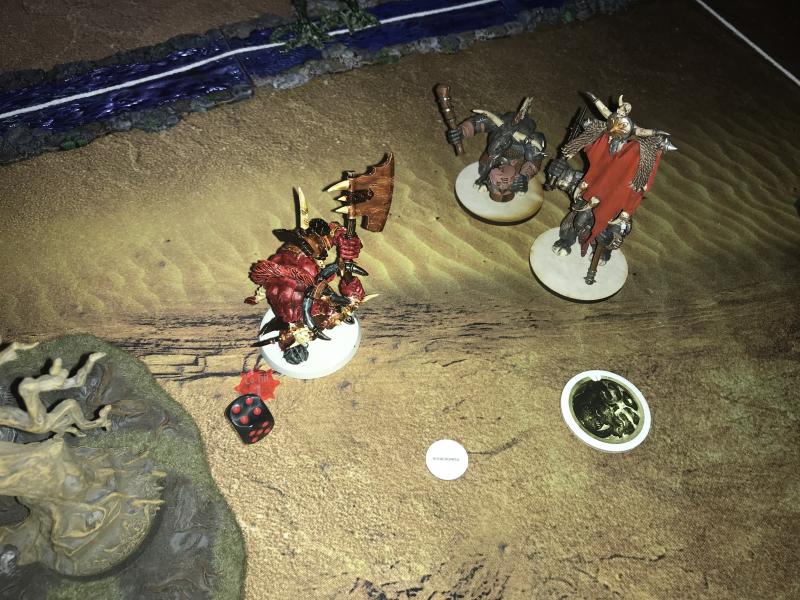 So in both my last two games I forced my opponent to attack from the front but whether 1.75K BCR or 1K Bloodgullet I just didn’t have the bodies to handle an overload where my opponent got to hit first and further reduce my body count.

A definite positive was this was the first BoC match that had both gone the distance AND finished in a reasonable time.  Still, with sufficient experience playing over Zoom at this point our plan was to set BoC aside for a while and try something a little more ambitious... 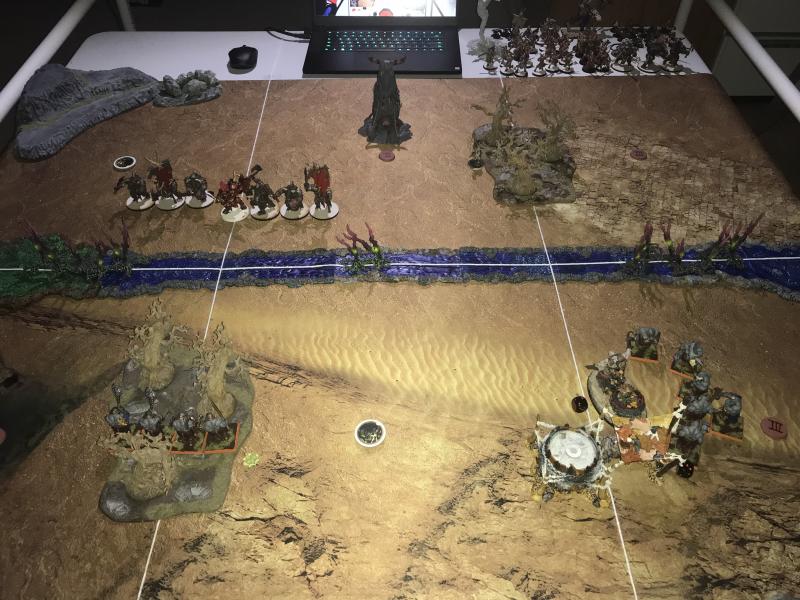