T1As usual, going off memory so I don't take up time by note-taking, IE things may be a bit wrong but the ending score is correct. He wins on drops and takes T1

Typical T1 for us both of moving up and onto the objectives. Jezzails have nothing to shoot at and no spells are really worth casting. 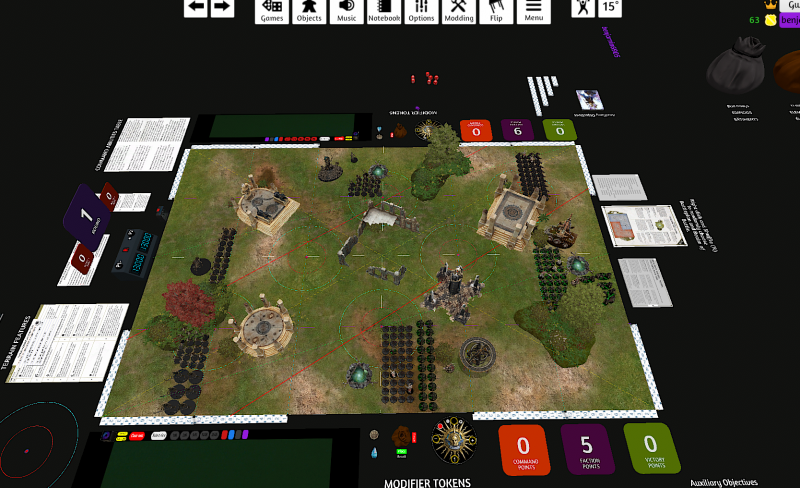 T2He wins the roll off and makes me go first. He makes the primary objective the bottom left.

I string out the Clanrats a bit more to get ready for the inevitable Stalker charge while shifting everything else up a bit more, being wary of him getting a double turn. The Jezzails still have no targets aside from some Mortek guard, which just heal back to full on his turn.

He moves the Stalkers and Zantdos up and charges them into the bottom Clanrats, killing all of them with 48 damage. 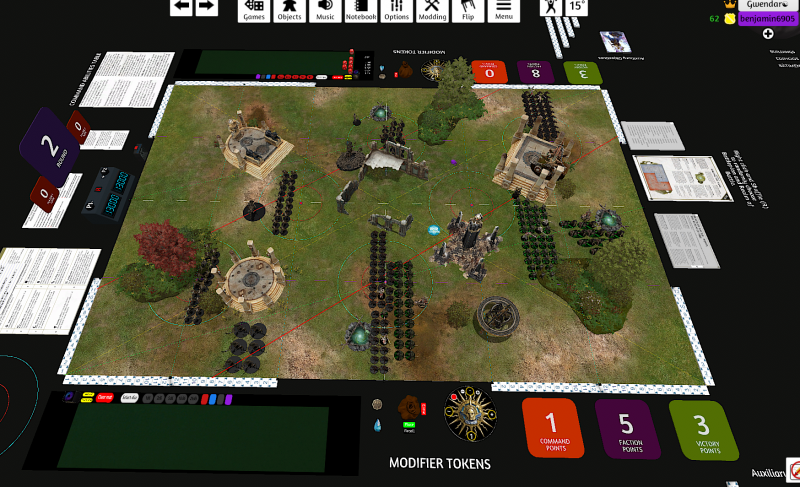 I get MMMWP off on the Acolytes but fail Death Frenzy (which has been a very common theme) on the SV who move up a bit but stay out of charge range from the Mortek. The Jezzails shoot off Zantdos while the Acolytes kill all but 2 Stalkers (only 19 damage went through). The Bombardier then overcharges and does another 9 damage to the Stalkers to finish them off.

His turn has the middle Mortek move up towards the Acolytes while his top ones move back to negate any Clanrat charges. 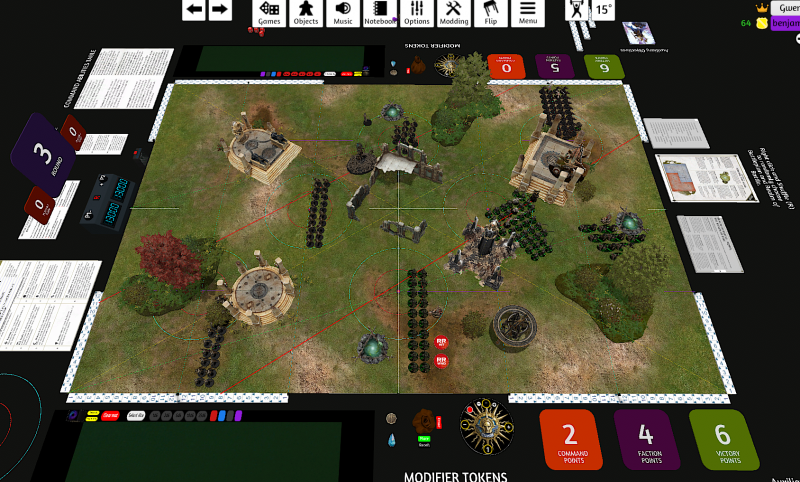 He charges the Acolytes with the Mortek and kills them all

I fail Death Frenzy, but I decide I need to act and charge them into the Mortek that killed the Acolytes anyway.. out of 30 wounds done, they took only 3 damage. They then swung back and killed ~15 SV.

We roll off for T5 and he wins, and at this point I call the game; the Mortek will easily finish off the SV and I will have no hammers left (aside from Jezzails) to contest anything.


Overall Thoughts
Things obviously didn't go too well here. I really feel that this hinged on that last priority roll; had I gotten it and been able to kill off those Mortek (which they probably would have since they don't get RR's in shooting) then I could have threatened the top objective with the SV and 40 Clanrats. I probably could've been a bit more aggressive, but overall I can't say it wouldn't changed the outcome too much.

Seraphon List - *Note that the Dread Saurians have inconsistent points changes listed and show as 420 in the latest FAQs which is the old value (pre-tome). The TO ruled that for this tournament he would allow them to be used at 420 points instead of 510 until it is clarified as it appears to be a typo in the FAQ.


T1He wins on drops and has me go first.

I get off Death Frenzy and Mystic Shield and shoot 6 wounds off the right Dread Saurian with the Jezzails. I decide to stay put.

He manages to get both Dread Saurians in (with the right one getting enough via the 3d6 charge) and the left kills 10 Clanrats while the right kills around 10 SV. Due to how he charged the SV, I could only get ~5 in combat and they only did a small amount damage.

middle of his T1 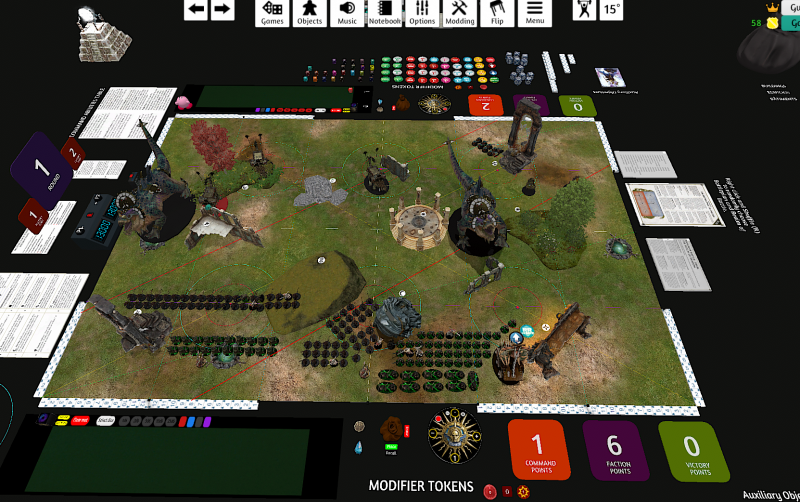 T2He wins the roll off and takes the turn.

He moves up his Bastiladon on the right and his general Stegadon towards the left Clanrats. Combat has ~10 more SV die who do only ~2 wounds back while he also kills another 10 Clanrats. I burn the middle objective so I can start trying to contest his middle.

I roll a 12 for the Bell and bring in a Warpgnaw. I do however fail to get off Death Frenzy but MMMWP goes off. The Warpgnaw moves into charge range of the right Dread Saurian while I make sure all the Acolytes can shoot into the left Dread Saurian. 6 Jezzails take the Bastiladon down to 3 wounds after doing 8 MW's and the other 3 take a couple off the Dread Saurian.. unfortunately the Acolytes fail to kill the left Dread Saurian by just 2 wounds (he basically negated an extra 17 damage from the Warpspark due to reducing all damage taken by 1). Warpgnaw charges in and takes the right Dread Saurian down to 5.. SV continue to do next to nothing due to limited pile in.

He shoots 6 Clanrats off with the Sunfire Thrower Stegadon and then charges in to kill the rest. Meanwhile the Warpgnaw does just enough damage to finish the right Dread Saurian. I go in with the remaining 10 Acolytes in range but only 1 gets through, leaving the last Dread Saurian on 1 wound. He then burns his left objective.

We call the game there as I mathematically can't win with only 1 1/4 Battleline left. 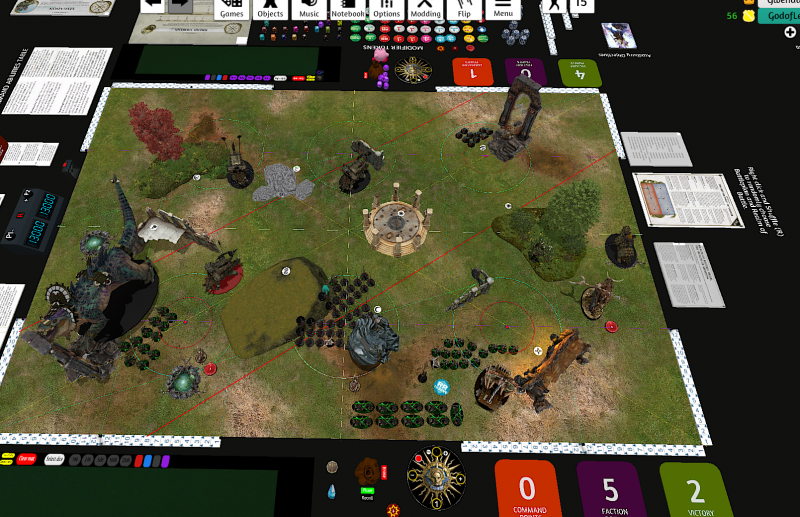 Overall Thoughts
Obviously things didn't go too great. This battleplan combined with Ulgu (all terrain is overgrown) was atrocious. The Jezzails couldn't shoot at much of anything worthwhile due to having no sightlines, meanwhile the only thing that could cap objectives was the Clanrats and SV.. and they had to stay on the objectives to keep them. I'd try playing it again but.. I really was not a fan of it at all.

Other than that I probably could've yet again played a bit more aggressively, but my biggest issue obviously was having the SV bunched up and allowing the Dread Saurian to charge in a way that they couldn't hit back. I couldn't retreat and charge them back in or else I would've reset the counter for VP's on that objective... so they were just stuck there. Had I ended combat with both of them sooner this would've been a bit different as they kept in place and unable to move really.