We were in the middle of a Khorne-centric narrative cycle when the lock down started that we were using in part to learn some new armies that we might take to a friendly small tournament (The Battle in the Barn) between our local gaming group and another gaming group an hour or two down Route 90.   Like a lot of people our initial perspective was to take a wait and see approach while focusing on the hobby side of the game in the interim.

As it became more and more likely that our small tournament at the start of summer wasn’t going to happen and that in-home face-mask to face-mask games weren’t going to be practical anytime soon we started looking for creative alternatives.

With the gyms closed I’d started hiking in the local county park. With relatives coupled up in Brooklyn I’d joked I was going to get a GoPro and livestream my hikes for family stuck in small apartments all day.  While that wasn’t going to be a thing as I was hiking I started thinking up ways I could hook up webcams over a playing table to stream the game to other players.

Fortunately I called my Dad up and he talked me out of some crazier designs into a simple “box” design to go over the table that would allow for both a God’s Eye (top down) view and plenty of other angles and shots if they proved necessary.

I measured the gaming table I planned to use.  I also measured the height of the ceiling fans that would be a major constraint to height in the spare room it would be set up in.  25+ years later my 8th grade industrial arts teacher would be very disappointed to learn that, after rigorous testing* to determine what size PVC pipe I would use for the frame I didn’t  go back to my drawing and re-adjust to allow for the width.  As a result, once built, the mid-frame was about 1.5” above the table-top instead of being flush.  This is a little annoying but not devastating.

The other design issue was that, for simplicity of measurement I’d put the support for the God’s Eye Camera dead-center.  If I’d stayed with a GoPro that would’ve mounted easily underneath this would’ve been fine but when I switched to more traditional webcams this meant the side mounting biases the camera a little.

After a few delays getting started actuallly working with PVC pipe and “furniture” grade couplings made the construction the easiest phase of the project.  All I needed was a sharp handsaw to cut the lengths and (by design) I’d maxed out the number of lengths that were exactly the same so frequently as long as I got the first cut right I could use that one to measure the rest.  In under 90 minutes I had a “Gaming Cage” set up in the garage. 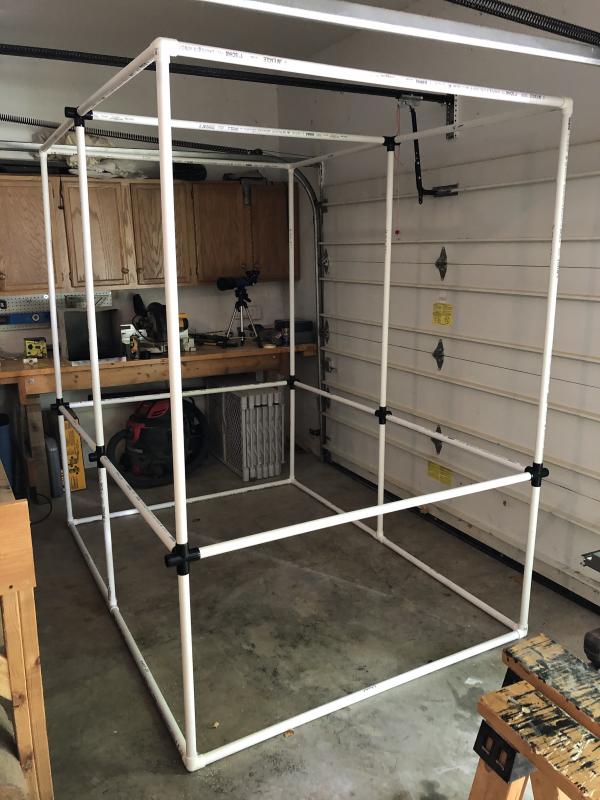 Unfortunately getting it built would prove a lot easier than getting it online...

*By rigorous testing I mean I stood with the 10’ lengths straight up in the air and “shook” them to find the narrowest pipe that still provided enough rigidity for the structure...  believe me this elicited plenty of strange looks.  I settled on 1” which also helped because there was also a full range of couplings available and I needed some “non-traditional” joints.