Of course at the time “everyone” was trying to by webcams to videoconference into work or for their kid’s remote learning.  My original plan had been to use GoPro cameras as then, when hopefully the need for a Gaming Cage was no longer present, they’d have other uses.  Unfortunately I ended up in a software update loop that hours with their Service Center couldn’t fix (basically it required a software update but until the software was updated it wouldn’t let me into the program I needed to get into in order to download the update...).

Once I’d identified some webcams that I thought would work I ran into another technical difficulty.  While our plan had always been to start at 1K on a smaller field once mounted we could see that the (now fixed focus) cameras couldn’t get the full 6’x8’ table into the picture.  Showed way more of the sides than necessary but you’d lose 4-6” on the ends.  Not a huge deal but with so many things these days coming onto the table 6” for the edge a potential complication.

For now though we decided to make a bug a feature and played “sideways” which allowed for a 58”x48” playing area while leaving table space for dice rolling and “dead” models as well as an easier position for the computer we’d be using to coordinate all the cameras.

A friend who had done some streaming recommended a particular software and a particular service and at first it seemed great as we quickly set up a three camera system (to which we hoped to add to).  Unfortunately we again hit software problems as, despite the fact that we’d downloaded the software directly through the service we just couldn’t get the service to recognize the software when it was fully set up.  We tried for a couple hours that first day and then again on another day just in case it had been a fluke with the server connection or something.  No dice.

Many of our local gaming group also have a movie night and we’d been doing a Zoom meeting discuss a movie we’d all watched every other week.  It had been working well enough that we decided to try gaming over Zoom, though it meant dropping from a three camera set-up to a two camera set-up (God’s Eye plus a side view showing the player).  With a quick camera test showing it theoretically worked we were ready to beta test. 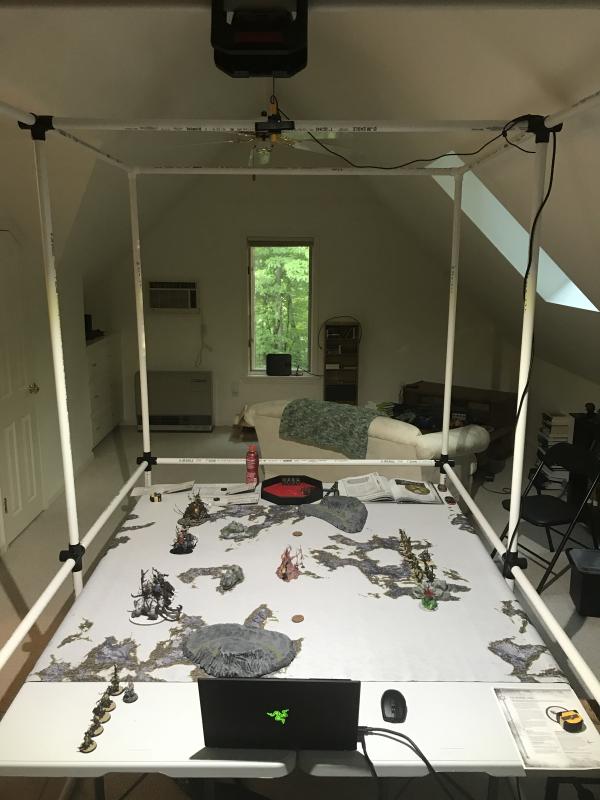