Hellmaw had been enraged to a titanic fury by the chanting of his keeper Knarkar as he stalked along the edge of the Azyrite ruins with orders from Molgrur to hunt for isolated enemy units. But stalking wasn’t really the word. With feet the size of boulders shaking the ground, his snorting and bellowing, and blades on his hands that were as long as a Stormcast was tall, scraping along the ruins, he was heard long before he was seen.

Knarker liked Hellmaw. He certainly wasn’t a pet and at times was barely even controllable but, not only did he keep him safe but he saw that the more Hellmaw killed under his direction, the more that Morghur would take notice and one day he would be bestowed with the gift.

As they left the confines of the ruins that were barely wide enough for the six storey high, 4 armed Ghorgon, they emerged into a clearing before a Wyld Wood copse. Hellmaw immediately turned towards a small unit of 5 Sequitors, emblazoned with the insignia of the Hammers of Sigmar. They were stood in the ready to fight. Hellmaw bellowed but the stench of curdled blood and the ground shaking footsteps had already alerted the Stormcast and they had formed a defensive formation ready for battle, Great Mace’s aloft and a crackle of lightning bounced between their armour.

Hellmaw charged forwards, surprising the Sequitors with his speed and crashing into them. Knarkar watched with chaotic glee as his Ghorgon’s butchering blades tore through flesh and armour alike, the screams only feeding the Ghorgon’s rage. The Stormcast put up a fight and with their weapons they tried to defend against the towering Beast, managing to injure him but it was merely a scratch. It was over in seconds. His blade like hands reducing Sigmar’s troops to a mash of meat and metal leaving just one left, injured and dying. Hellmaw tried to grab him with his huge slavering maw, but the Sequitor fought bravely for as long as he could, however Hellmaw was frenzied and baying for the Blood Gorge and with a final bellow he bent down and swallowed the injured Sequitor whole. Knarker smiled as Hellmaw gorged on the blood and the remains of the rest of the obliterated unit, gathering his strength and preparing for whatever else the battle would bring. 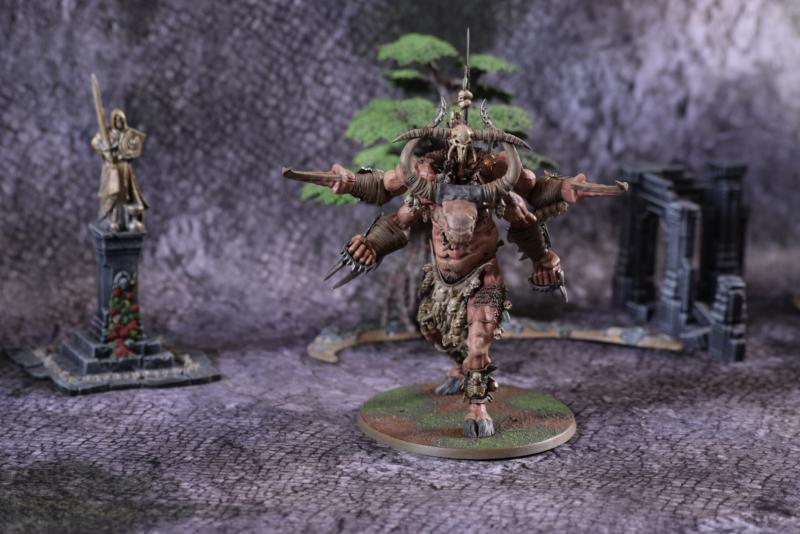