Molgrur stood in the impenetrable gloom of Ulgu listening quietly. All of his senses were straining for any sound of the enemy. He knew they were there somewhere. The distant sound of a scrape as a shield rubbed along a wall. A pebble kicked along the cobbled streets. The smell of polished armour. He could hear his Army too. Ghorgon’s stamping around, tense and eager to find the enemy and feed their blood thirst. Ungors, quietly bleating as the Shamen’s prepared them for their sacrifice.

Suddenly his ear caught the nearby sound of a heavy metallic item being rested on the floor. That was all he needed. Charging as he bellowed, Molgrur raced towards the sound, followed by his Bestigors.

Out of the dark appeared the golden shape of a Stormcast, he charged faster and as the details resolved, he could see that it was one of the Stormcast Heroes. A prize worth dying for if he had to. He raised the mutating gnarlblade and thrust it with all his might and with the element of surprise and a lifetime of battle, it found a weakness and as the Lord Ordinator turned, the blade slipped under the helm, slicing into his neck. As the blood flowed freely down his armour, he died looking into the eyes of Molgur just as many heroes have over the years. He won’t be the last. Molgrur severed his head and raised it aloft, arched his back and brayed to the God's themselves as he saw his next target 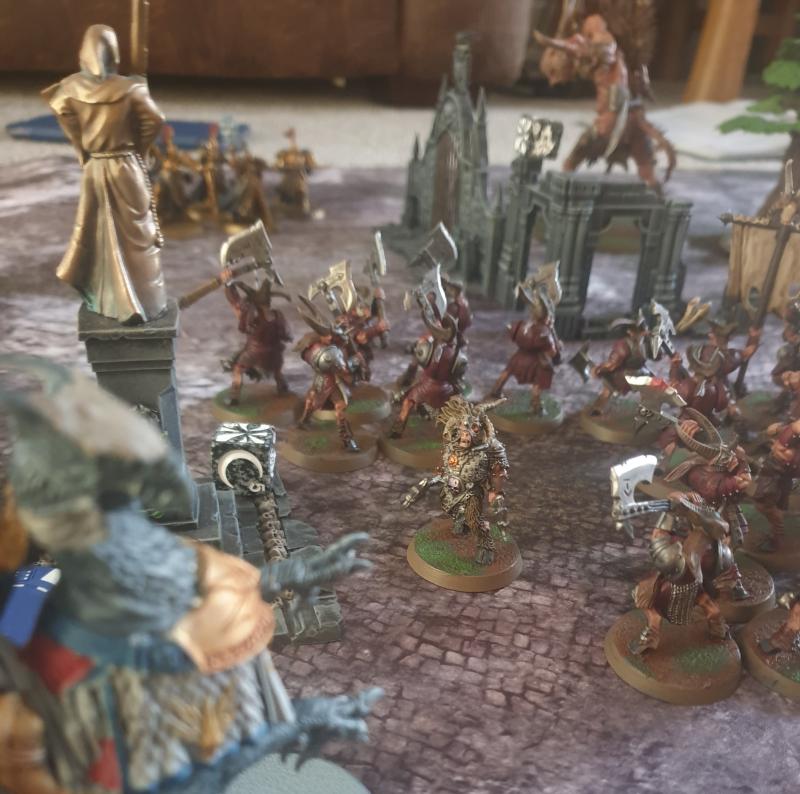 This was a 1250pts battle between Stormcast Eternals and Beasts of Chaos using Star Strike for The Generals Handbook 2019. I had the full Mutilating Brayscourge and Sam picked a mix of Sequitors, Evocators and a Knight Incantor, Lord Ordinator, Lord Excorcist and Lord Arcanum. He initially had the Hailstorm Battery but when we rolled for Ulgu and The Impenetrable Gloom it seemed pointless.

By the end of turn one, the Bestigors and Molgrur were waiting in the centre of the map as in the picture above, supported by Ungor Raiders, Gors heading out to the left with Night Fury and Hellmaw and Knarkar out to the right. The first comet struck and landed in the centre of the map (noted by the marker seen through the Lord Arcanum above.  10 Sequitors and the Lord Ordinator and Lord Arcanum came to the middle, with the Lord Exorcist bring some more to meet the Gors and Night Fury who were still moving towards the centre of the left flank.  The fighting was fierce and as detailed in the narrative, Molgrur took out the Lord Ordinator in one go as the Lord Arcanum took out the entire squad of Ungor Raiders. By the end of turn two, the Sequitors were in charging range of the Bestigors, Evocators had blasted down from the heavens and were ready to charge in to them too. Hellmaw and Knarkar had wiped out the Knight Incantor and all but one of a squad of Sequitors to the right.

It all happened on turn 3 after Sam made a bad choice and had a bad roll. The comets came down and mine was near my Herdstone so that was safe, Sam's was right in the middle of the fighting between Hellmaw and the Sequitors. 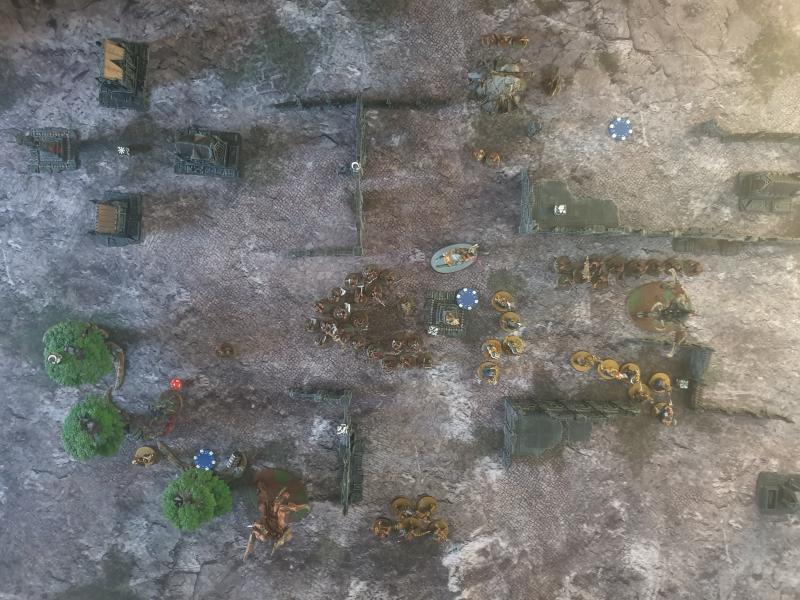 Sam then had a bad roll when he failed the charge with the Evocators who were nowhere near anyone to help them and were then reduced to one model from 5 after a Titanic Fury charged Hell Maw ripped them to pieces. Then Sam made the decision to not charge the Bestigors with the Sequitors, thinking that it was better to win the numbers game and claim the objective. Sometimes a good tactic. However, the Lord Arcanum was defeated in one go by Molgrur and with his Grisly Trophy Ability, 20 charging Bestigors, +1 attack when charging, - failed wound and hit rolls, soon reduced them down and then, as the dust settled, and the blood stopped flowing, it was clear the numbers were against the Stormcast and they were unable to win. Game over. Another victory for The Mutilating Brayscourge.

As an aside this was Night Fury's first battle and although he managed to destroy the Lord Exorcist, a badly placed pile in meant he was unable to follow up his attacks into the Sequitors and so was almost killed. He needs to learn quickly if he wants to stay a member of The Mutilating Brayscourge!