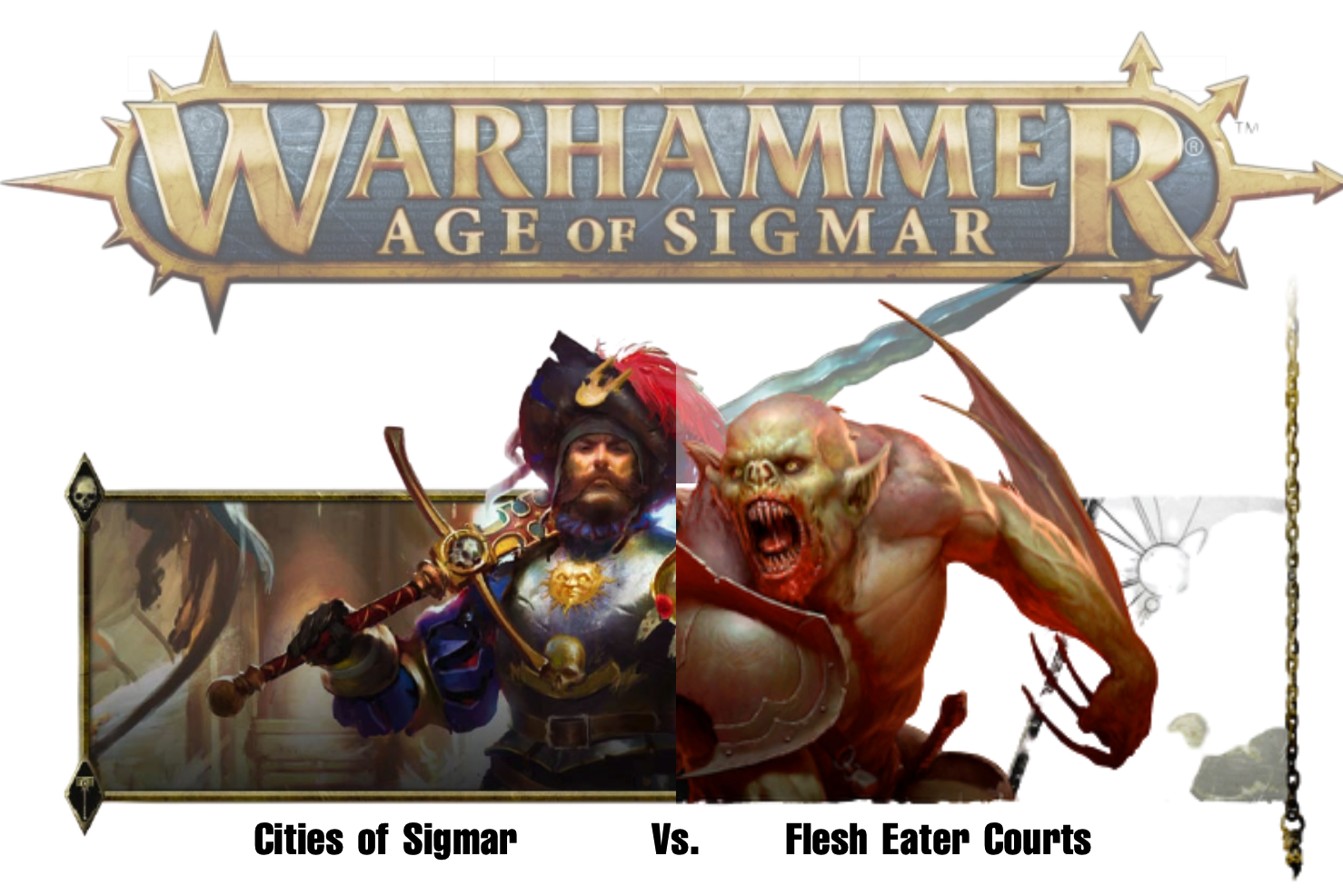 **Hunters of the Heartlands

We had a four player group for this week’s game day at the club, and our fourth happened to be another Soulblight player. So in order to avoid mirror matches I chose to bring my dusty old FEC army. I haven’t played FEC since SBG released, which was slightly before the release of third edition. Going through the book with 3rd edition in mind made me think there were actually quite a lot of fun things to maybe do with this army despite its poor reputation in the new edition. I was also excited to bring a low model count list after months of playing 120+ model armies and specifically built my list around bringing two big boys to the table. I went against the grain a little and ran a Ghoul King on Zombie Dragon as well as a Ghoul King on Terrorgheist, instead of the double Terrors that are normally used. I also opted for a list that used as few ghouls as I could manage so that I could easily pack everything into a single travel bag and not have to worry about pushing too many models around. 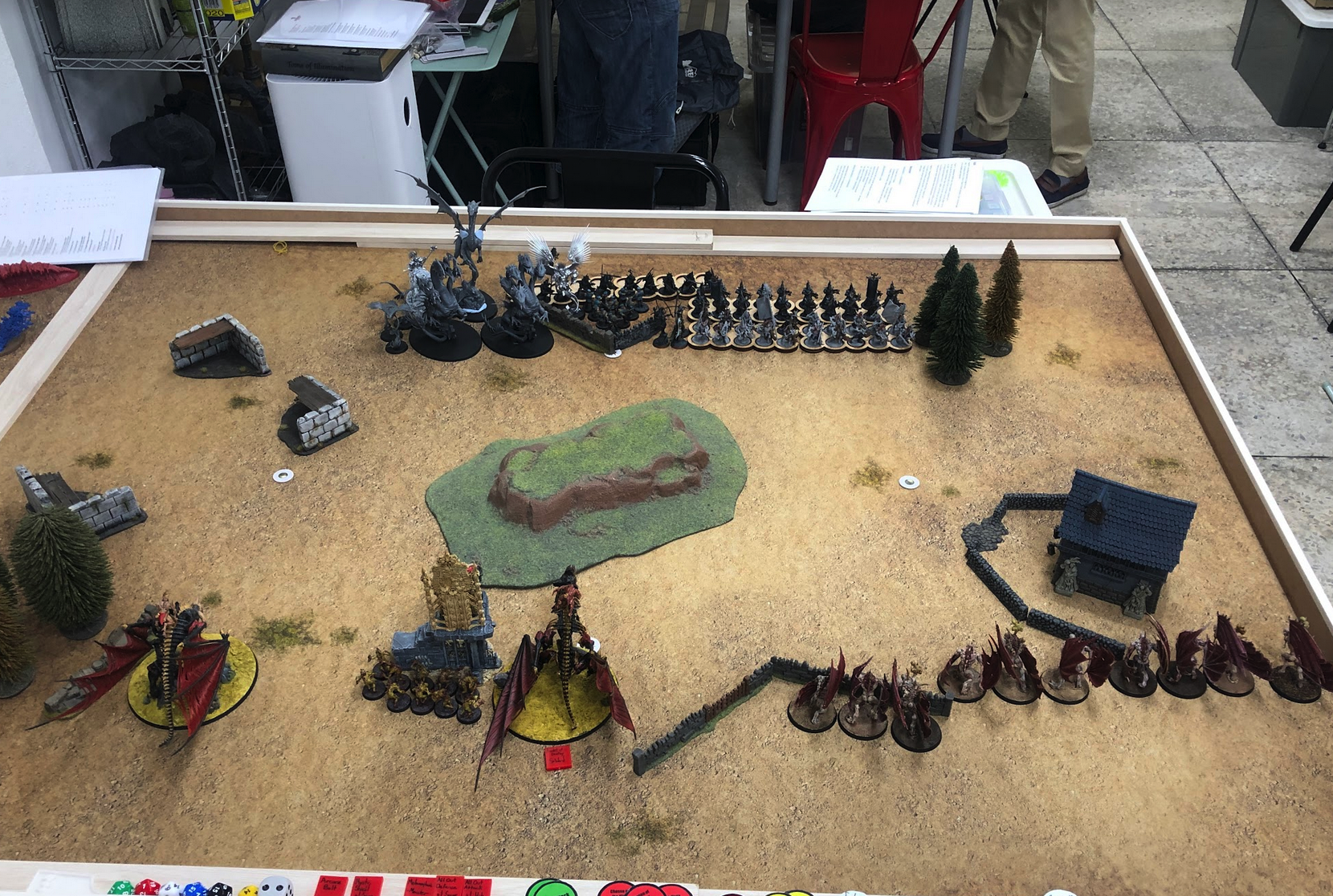 My opponent had a double battle regiment with a total of 3 drops, which gave me the advantage on how to set up my units. After some consideration I decided I would engage in a big monster mash by placing my dragons opposite my opponent’s. I spread my flayers out on the right side with dreams of rushing up the flank to get into the juicy ranged units there. I also had quite a few summons to bring in and hoped that I'd find space near his end of the table. 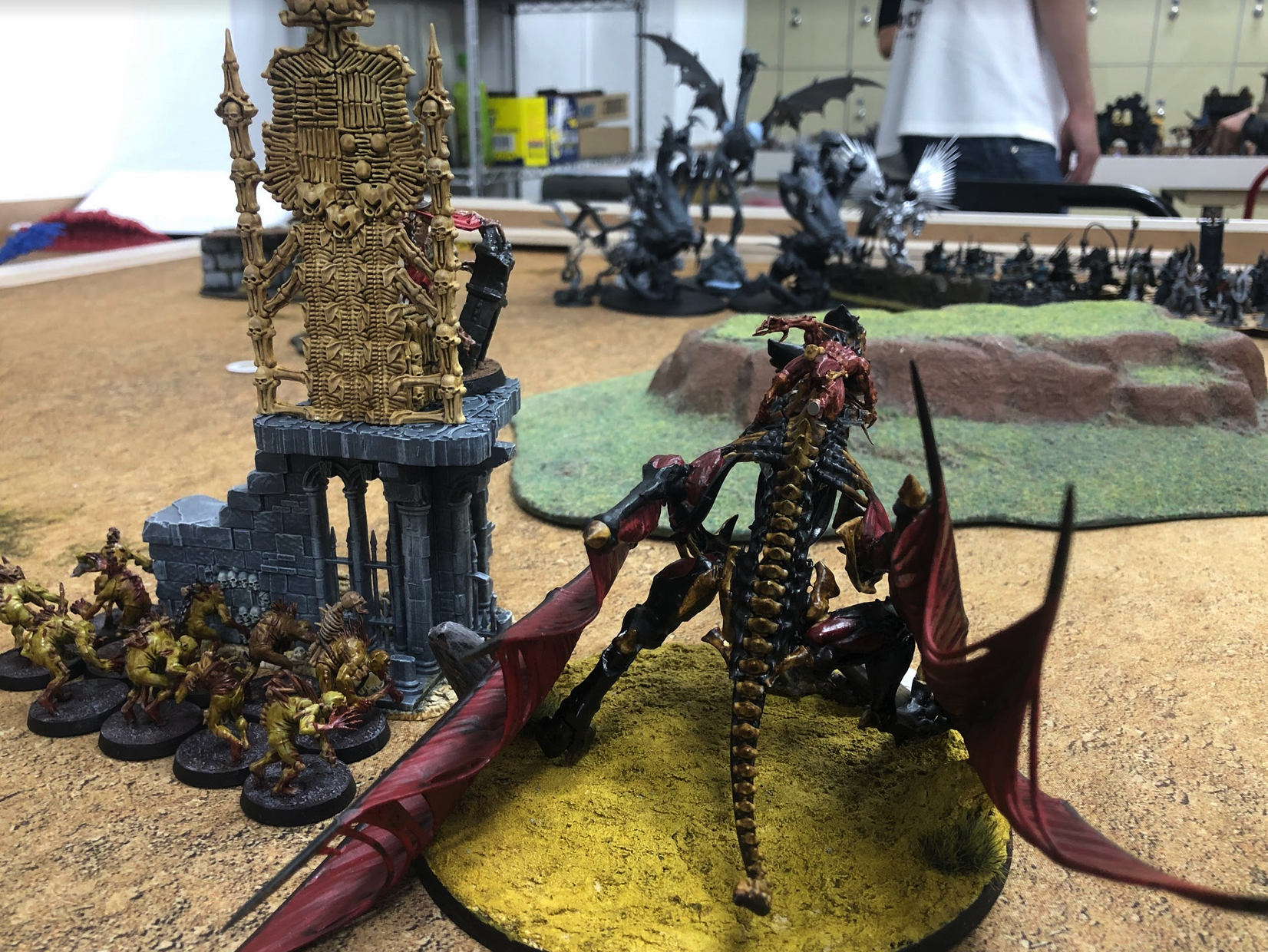 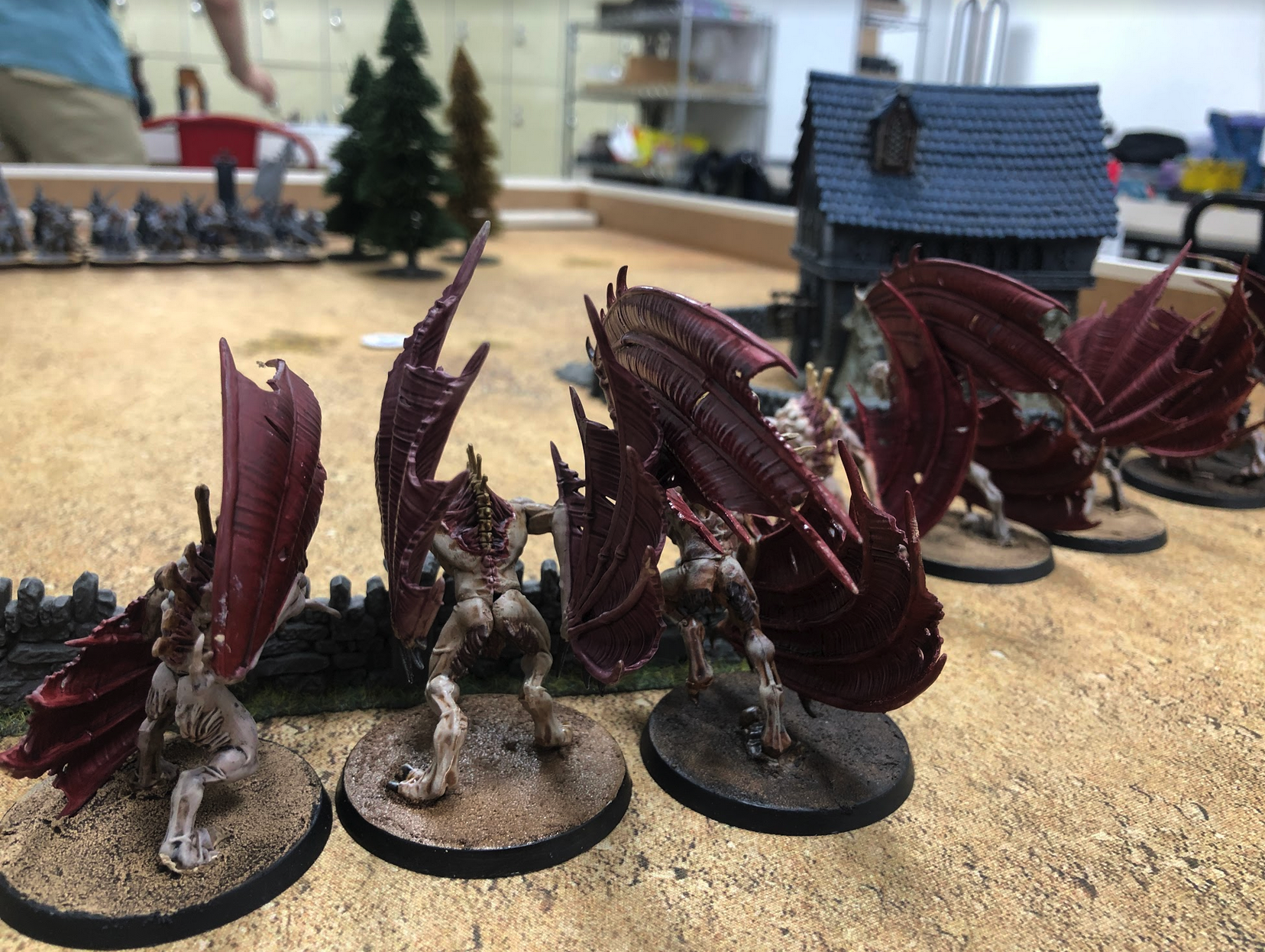 Top of Turn 1: Cities of Sigmar

My opponent surprised me by actually taking the initiative this game and surprised me even more by moving aggressively up the board.

He had a few tricks up his sleeve though, as he strategically placed a few endless spells ahead of his troops to minimize my ability to charge (since you can’t finish a movement within an endless spell). 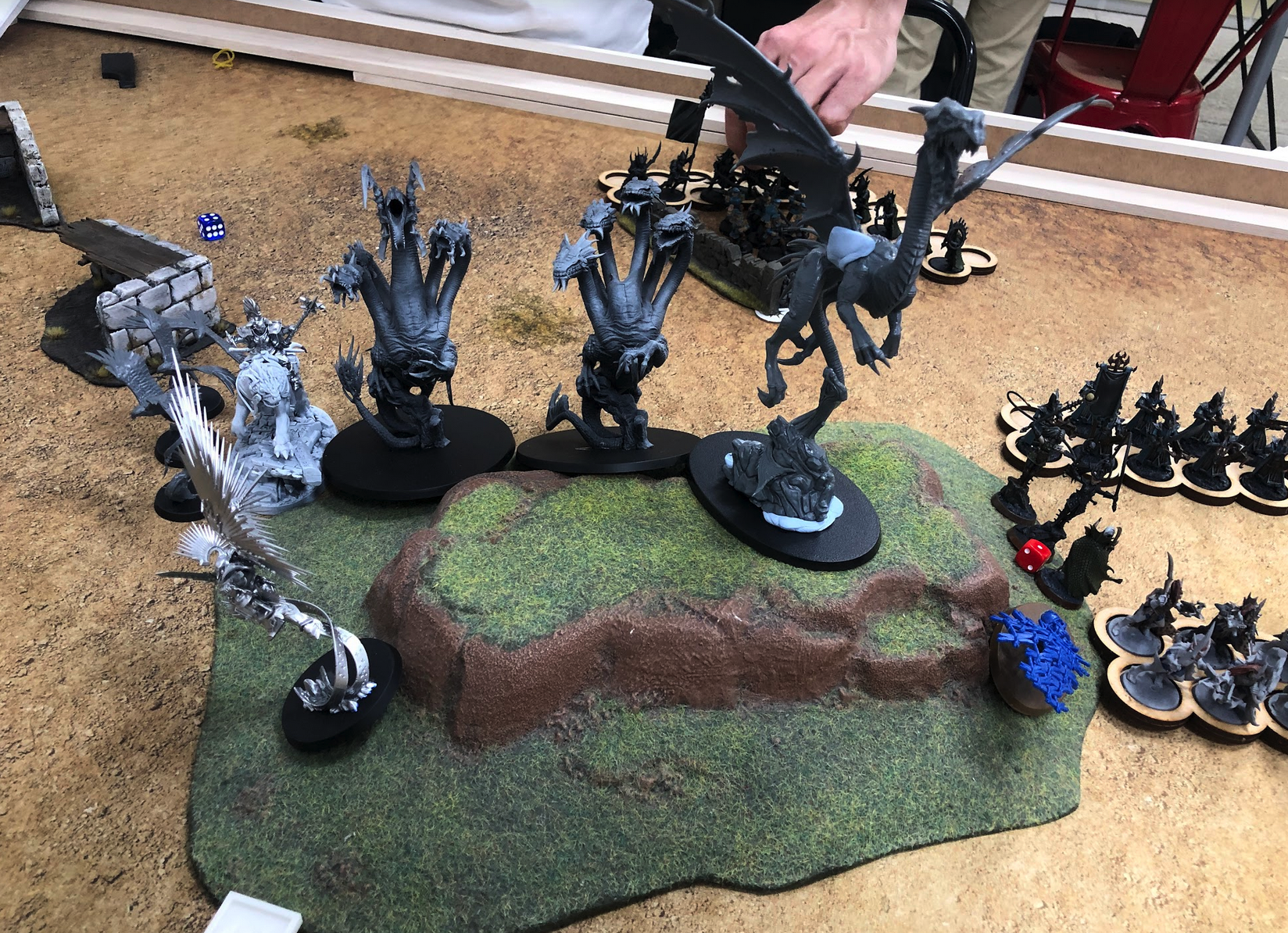 Several scary looking monsters placed themselves on top of the hill in the middle of the board, easily within charging range thanks to the pre-game move from the battalion (though he unfortunately rolled quite low on those bonus moves). Fortunately for me, his ranged units were still out of range and couldn’t get any shots off this turn. 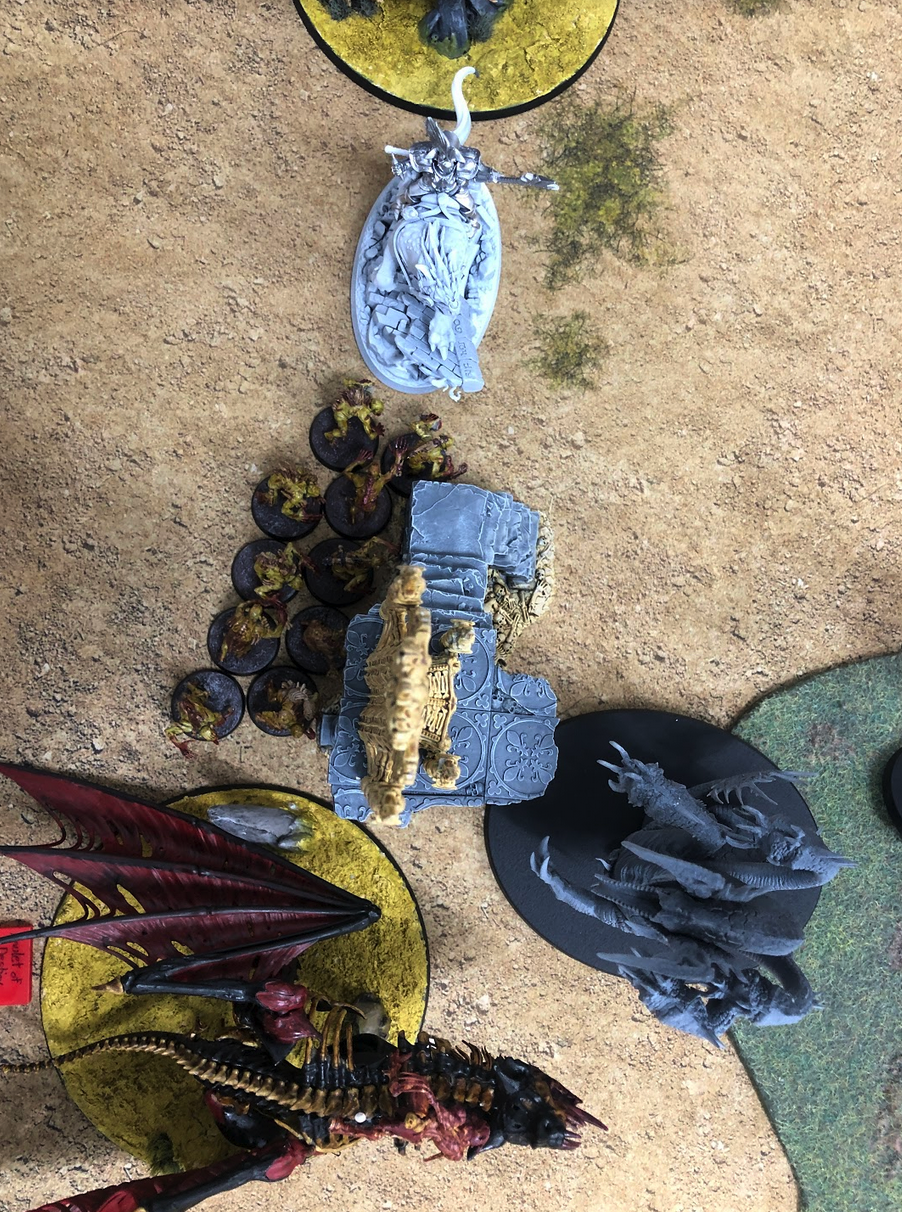 His monsters charged in and right off the bat he pulled a pretty epic play. His Kharibdyss got within range of my throne, passed the Smash to Rubble roll toppling my terrain piece and then I rolled a 1, killing my Archregent before ever getting a chance to do anything. This put me in a pretty rough position because that meant I lost a full unit of summonable Knights, and therefore a decent chunk of my tough units.

In the combat phase I was able to swing twice with my GKoTG and take out his Kharibdyss (and thank goodness because remembering how to spell that monstrosities name for a whole battle report would be a pain) and get some revenge for my fallen Archregent.

Cities scored a solid 7 points this turn with a completed battletactic and holding several objectives. 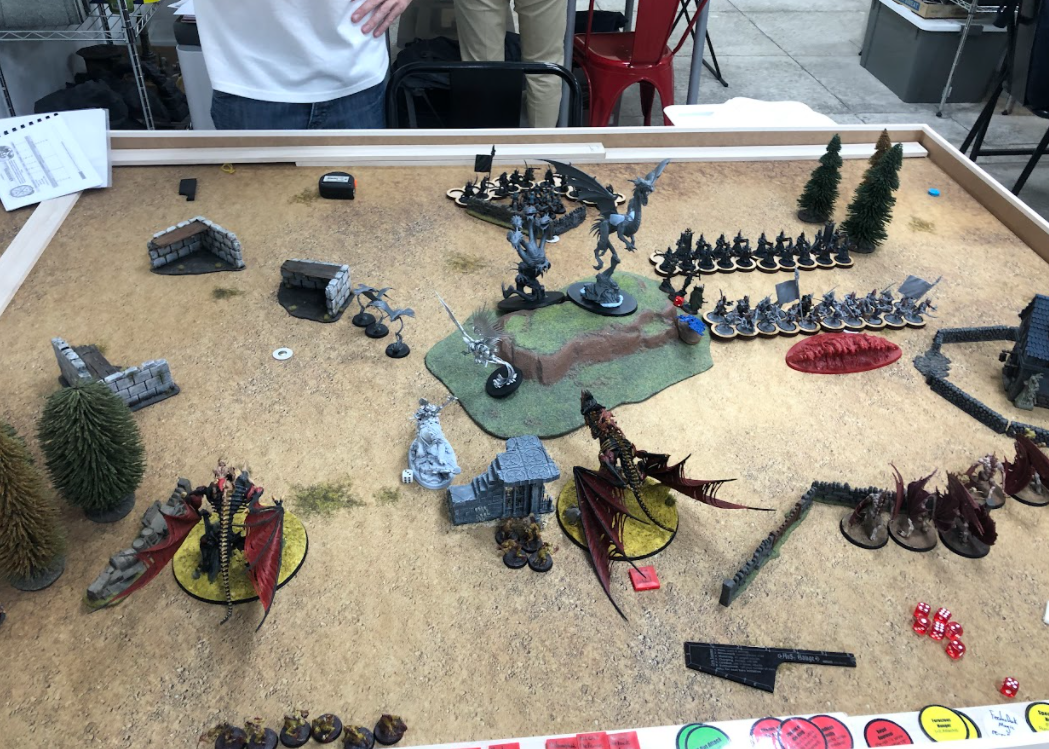 The board state at the end of the first turn.

I took the easy to accomplish Monstrous Takeover battle tactic and picked out my targets for this turn. I threw my two big guys into his Stormcast heroes and swung my flayers around the house terrain piece on the right side of the board. 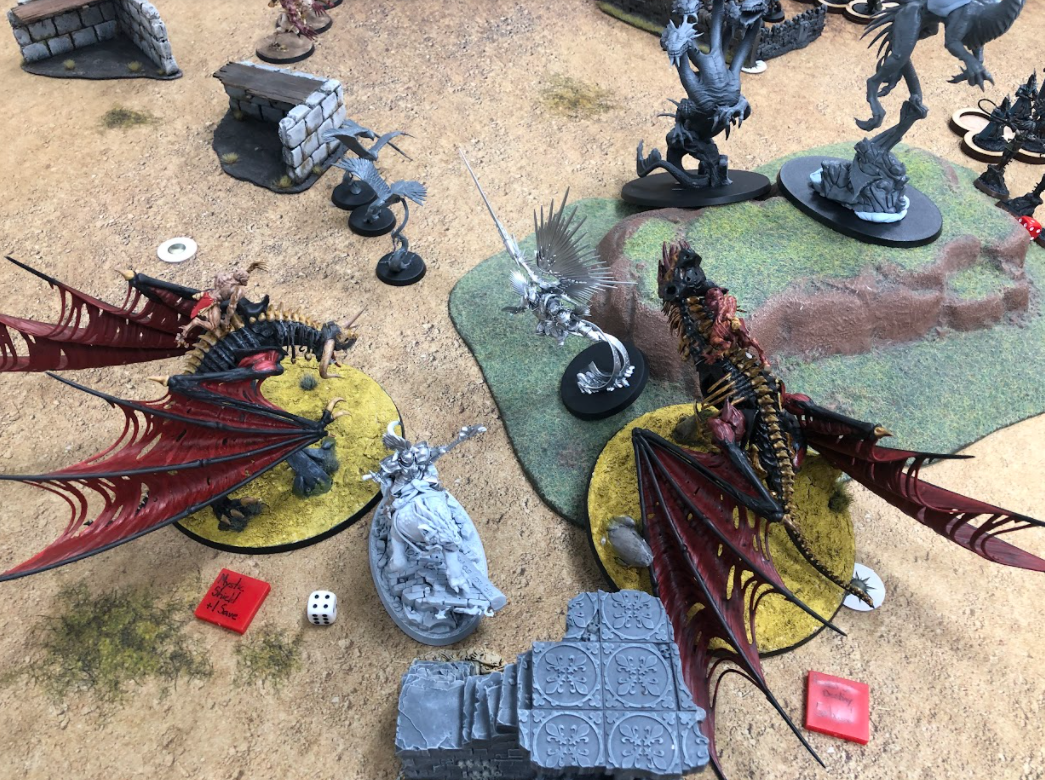 My GKoTG and GKoZD made short work of the stormcast thanks to feeding frenzy and my flayers starting working through his ranged units. The flayers' bravery focused ranged attack really works well against units such as the dark elves who have low bravery.

I also got both of my summons off, bringing in a unit of horrors and a varghulf at the back of the board, hoping to break into the units he had positioned there and maybe steal the back objective.

I scored 5 points this turn, plus the monster point gained previously.

So, I won the deciding roll off here and got the double turn. I think this was the first time I’ve ever gotten the 1 to 2 double, but I almost always go first in my games so I rarely have the opportunity. My opponent was in a tough spot and grabbing the first turn would have allowed him to re-position his troops and get some very important shooting off. 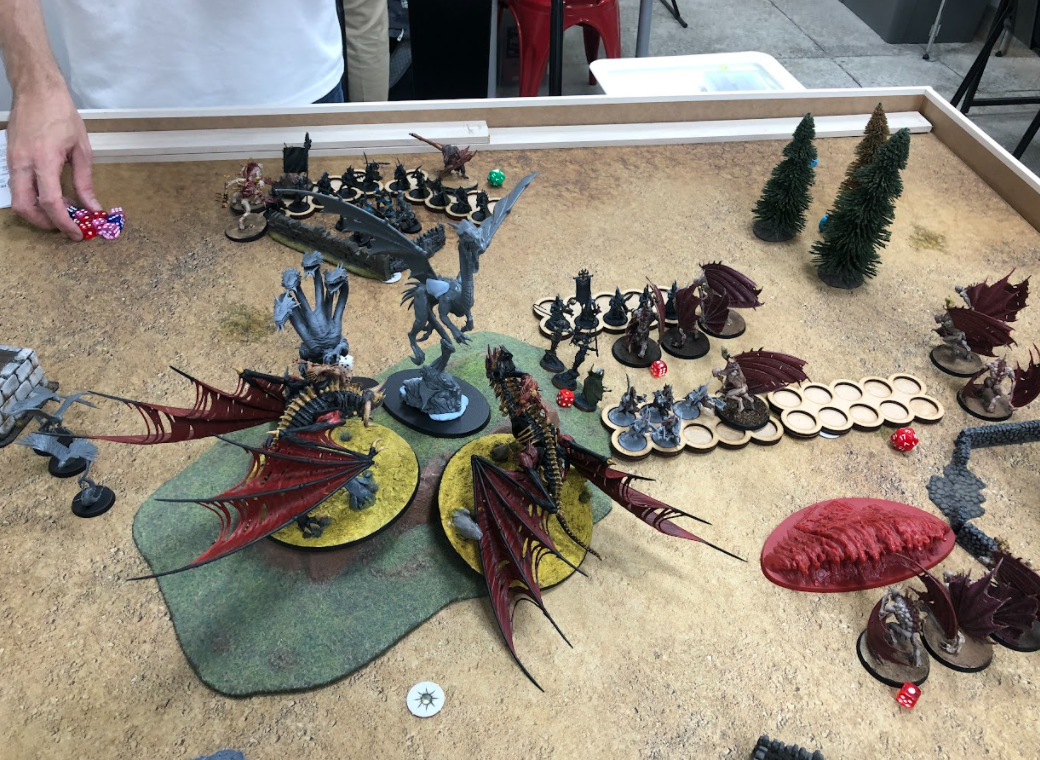 My big hero monsters charged into his hydra and dragon and were able to easily wipe them out. Meanwhile, my flayers had an equally strong turn and ate through most of his shooting units. My varghulf and horrors also got into his backline, and while they mostly whiffed on their attacks they still locked up his units and left my opponent with few options. 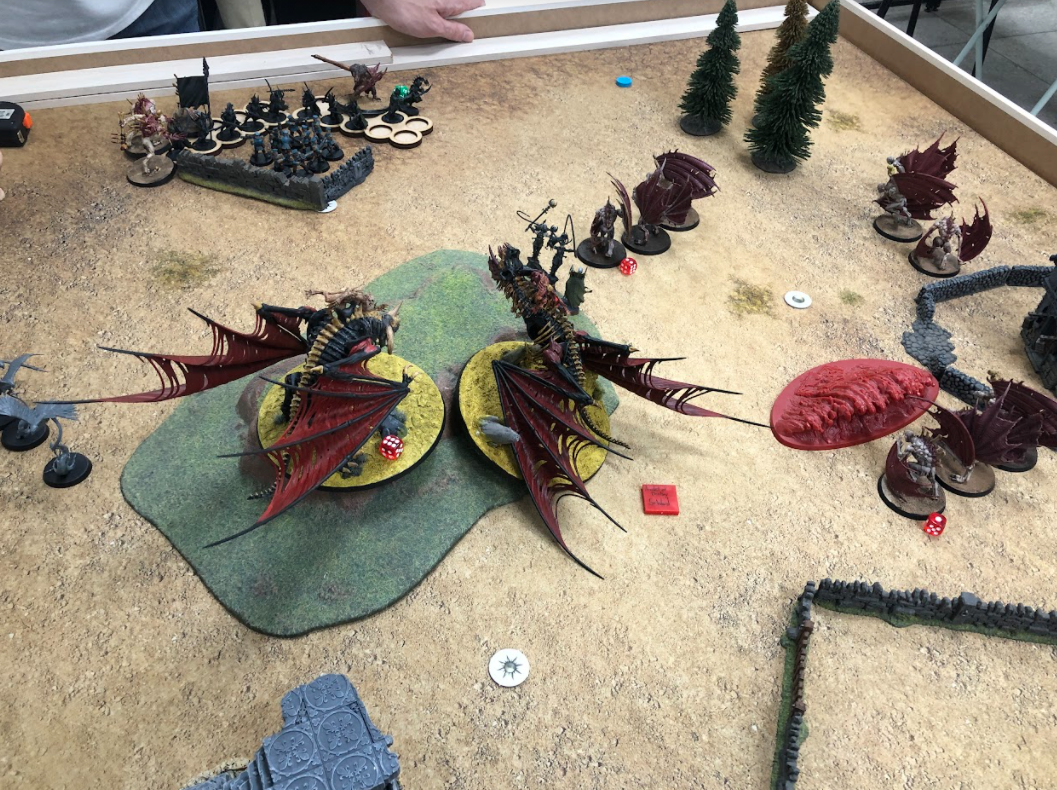 The end of the turn looked like this, and while I didn’t score a crazy amount of points my opponent decided to call the game since he didn’t have the units left to contend with the things I had on the board.

So.. this game is a pretty good example of what FEC are capable of doing and one of the reasons why I shifted away from them and into Soulblight. When FEC goes off, it goes off big and can easily table certain armies in a single turn. On the other hand, had the dice rolls gone a different way my opponent might have been able to shoot off my dragons and the game would have been over just as fast.

For me it was a nice change of pace to play with fewer models, less magic, and a simple aggressive game plan. We also got to experience that awesome moment on the first turn where my Archregent got killed in the wreckage!