Frederick Holtz grew up in the shadow of Sigmar himself. The son of a nameless courtesan in the pleasure-houses of Azyr, he was raised as a ward of the State in the prestigious Starhammer Academy, not far from the high palaces of Azyrheim. Starhammer was where the elite future soldiers of the God-King were raised, and in the course of his upbringing Holtz had the chance to see Sigmar three times when the deity came to speak to the students about their duties as the leaders of tomorrow's wars. He passed all his tests with flying colors, and seemed poised to take a place as a petty officer in the school's own military regiment, the Starhammer Guard- at the last moment, though, his request was refused, and he returned to the general pool of graduates.  Holtz spent a night alternating between fear and confusion, unable to understand why he had been passed over in favor of lesser students and wondering what his future might be now that his constant goal had been taken away.

The next morning, a man came to see him. Missing an eye and three fingers, scarred and limping, he was clearly a veteran of hundreds of encounters. He introduced himself to Holtz as Templar-Captain Gregory MacDonald. He was the one who had pulled strings to have Holtz denied entry to the Guard, he explained. Though prestigious, the Starhammers were no place for a man of Holtz's talent and acuity. Instead, MacDonald offered Holtz a place in his retinue.
Over the next decade, Holtz would earn his rank as a full Templar fighting enemies all across the Mortal Realms, rooting out corruption and heresy behind the lines and crushing monsters that threatened Sigmar's nascent domain. When MacDonald retired, Holtz took up the mantle of Templar-Captain in his stead, and after his destruction of the Ghoul-Triarchs of Ghyran and their cult received a promotion- from Azyrheim itself- elevating him to the rank of Templar-Marshal. In this capacity, Holtz had a regiment of his own to command, and it amused him as he began to poach graduates of his old academy from the Starhammers to fill his own ranks.
Then, the Steelglass crusade was called in Chamon against a fragment of the clockwork legions of ancient Cypria. Suspecting Chaos corruption among the metal men, Holtz attached his regiment to the crusade, seeking to destroy whatever taint existed among the ruins. It was some of the hardest fighting that the Templar-Marshal had ever encountered. The enemy seemed to have planned for their every move, every stratagem, and his soldiers were often thrown into combats that would tax ten times their number.  Holtz was unsurprised when evidence of Tzeentchi corruption was found among the clock-men and in the ruins of the great libraries they fought among, though he was perplexed as to why it was never his men who did the finding.
As the Crusade reached its apogee, it approached one of the last great intact libraries of the ancient Cyprians. Its leadership called for the total destruction of the library to ensure the removal of all taint from the region. The night before the offensive was to begin, however, Holtz had a dream of a great beast buried under the library, thrashing against its chains. Waking suddenly, he was gripped by a horrible suspicion. His tomes confirmed that Cypria had waged long wars against Tzeentch at the time of the fall of the realms, serving as one of the Changer's most stalwart foes. Why, then, would there be evidence of taint among their defeated enemies?

Rousing his men, he sent a messenger to the crusader lords asking them to delay their attack until he had had a chance to discern the library's true nature. A reconnaissance in force showed that much of the interior of the library was covered in warding runes, seals against the demonic. Holtz's pulse quickened as he sensed the malevolent presence lurking under its floor. The library was a prison for a powerful daemon, and if it was destroyed... At that moment shells from the crusade's artillery began to fall among the regiment. The attack had begun.
Almost from the moment they left that place, Holtz's troops found themselves under attack- not by the Cyprian legions, but by the crusade's own forces. Advancing to the trenchline surrounding the library-mountain, Holtz found that his soldiers had been declared traitors by the crusade's leadership and ordered to be killed on sight. With the power of his oration and his reputation, Holtz convinced the gunners at the front lines to stand down and allow his men to pass.
The artillery park was more difficult. It was commanded by the Bluefeathers, the personal regiment of General Kraft of the crusader lords. Here, the Templars had to fight doggedly, disabling the artillery pieces one by one. When he captured the Bluefeather commander, General Kraft's son-in-law, Holtz knew the truth. Heinrich Kraft bore the secret mark of Tzeentch on him. Steeling himself, Holtz and his soldiers attacked towards crusade headquarters. At first, the Templars faced human soldiers of the generals and lords' personal guards- but as they pressed closer to the command chamber, these became twisted by the power of Chaos, and their attacks sorcerous and strange.
The command tent itself held the final horror- every general of the Crusade, their eyes lit by a strange blue glow, hands crackling with arcane lightning. At their head was General Kraft, whose visage had begun to twist into that of a daemon. He laughed when he saw Holtz. The Templar-General had failed, he said, and now he would erase one of the legacies of ancient Cypria and deal a blow to the plans of Sigmar the Deceiver. On the contrary, Holtz replied. He had stymied Kraft's aims. The library could not be destroyed now that the guns and soldiers of the army no longer obeyed the General, and Kraft and all of his conspirators would die.
At this, his men opened fire, tearing the General and his fellows to shreds with a hail of gunshot- but Kraft alone did not fall. Holtz misunderstood Tzeentch's aim, he said. True, the daemon might stay imprisoned, but its clockwork wardens were destroyed... and so were Holtz and his regiment.  At this, the tent and its surroundings exploded in blue fire, consuming Holtz and most of his soldiers. In the aftermath, the Steelglass crusade came to a halt, as the survivors limped back to friendly bases and regrouped, bereft of leadership.
Still, Holtz had done a great service for the forces of Order, preventing the release of a daemon-prince and the opening of a portal to the Realm of Chaos, and exposing the treachery of high-ranking officers in the armies of Azyrheim. For this, he saw Sigmar again, as he was reforged into an incarnate vessel of the God-King's mighty will and released into the world again to do battle in His name. Indeed, Sigmar had a special assignment for him- Holtz would join the Death Watch as an unflinching agent of the God-King, and there keep watch over his fellows even as he was responsible for rooting out evil in the Mortal Realms.
Surprisingly, Lord Celestant Steelios did not object to this- indeed, he's said to have laughed for hours when he heard about who was being assigned to his command. It has been almost a decade since that day, and Holtz continues his watch- ever ready, ever vigilant, ever eager in his war against the enemies of Sigmar.
------
The storytellers call Brother Holtz the Black Templar, Sigmar's Fire, the Holy Warrior, the Watchful, the Eyes of Azyr, the Sixteenth. 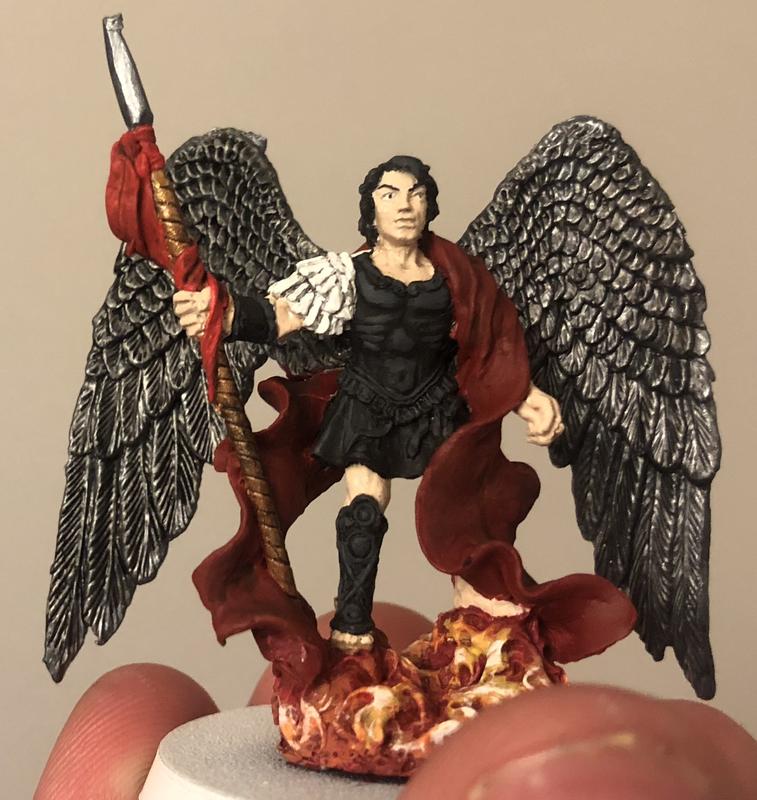