Hi guys, just looking for a quick clarification about an item introduced in the recent Tzeentch book.

The item pictured below appears for Tzeentch mortal / arcanites.  My question relates to the final sentence, which says that hits against a wizard cause that wizard to forget a spell, randomly.

If this attack were to land upon a chaos wizard, for example, how would you resolve which spell is to be forgotten, considering that on almost every daemon warscroll, it states that "CHAOS WIZARDS know the Summon X Daemon spell, in addition to any others they know".  This means the list of spells known to chaos wizards is pretty long (I haven't counted the number of summon spells).

Now, the best course is probably to disregard the summon spells completely when determining which spell is to be forgotten, but this could work unfairly in the favour of the defender, if he plans to summon a specific unit at some point in the game.

Has anyone experienced this issue?  I can't imagine the scenario will surface very often at all, but considering a win-at-all-costs player I know, it would be nice to have some clarification. 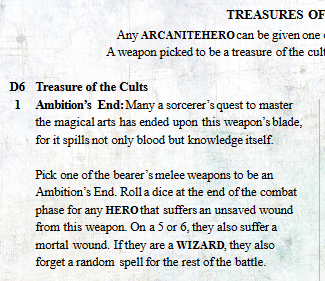 Example of a summon spell