I'm a little bit confused by the wording of the Command Ability Leave None Alive. 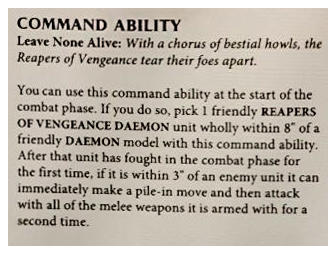 Doesn't any model of the REAPERS OF VENGEANCE DAEMON unit count towards wholly within 8" of a friendly DAEMON model ?

**the intention could have been Daemon Hero or Hero.. or Reapers of Vengeance unit within Daemon or Hero.. !?..**

What's the meaning of "DEAMON model with this command ability" ? Since all Reaper of Vengeance DEAMON models should have this ability!? or not?

21 answers to this question