In this post, we continue our survey of the tables of Holy Wars 2017.

Otto and devious sorcerer Ethrac, riding to battle on the shoulders of their brother Ghurk, quest for more blessings from Nurgle as they look to harness the power of the mighty Wyrmrid Reaches. 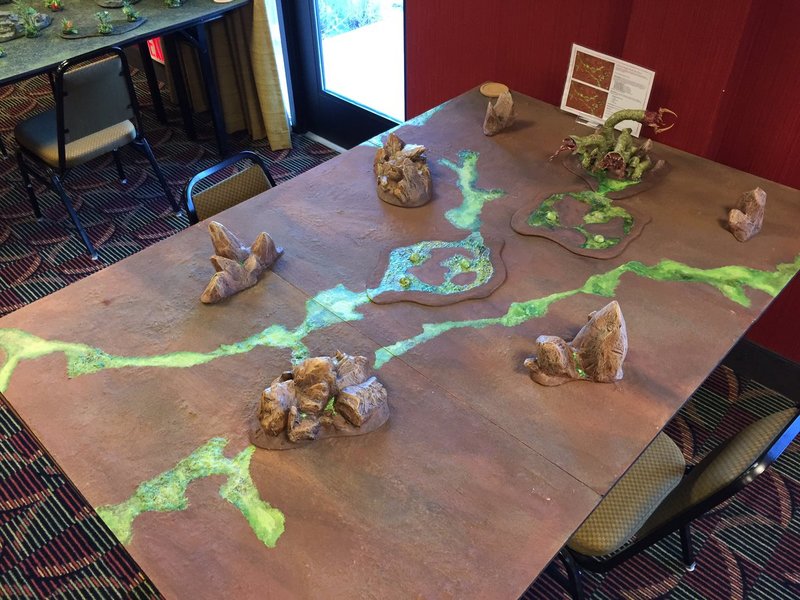 This table had as its primary objective a kill-quest scenario where each player was looking to do more wounds to the resident monster, the Wyrmrid Reaches, than the opposing player.  I provided feedback on it Friday night, and after some testing by some helpful attendees, it ended up being toned down from its 2+ save against shooting and 3+ against combat to a straight 4+.  There were also 3 Grail Token objectives that head to be held: 1 in each of the starting zones and the final one within reach of the Wyrm.  This of course was significant because every round the Wyrm did unpreventable wounds to all units within 8 inches based on how wounded it was, starting at a d3 wounds and scaling all the way to d6+3 wounds to all units.

Harbingers of dark months and dead seasons, the ogor tribes continue their assaults on the mortal realms. They fight not to conquer or dominate, but for sustenance - they are led by their bellies to their battles, and the victims of their slaughter are consumed, staving off the hunger briefly before the hunt begins anew. 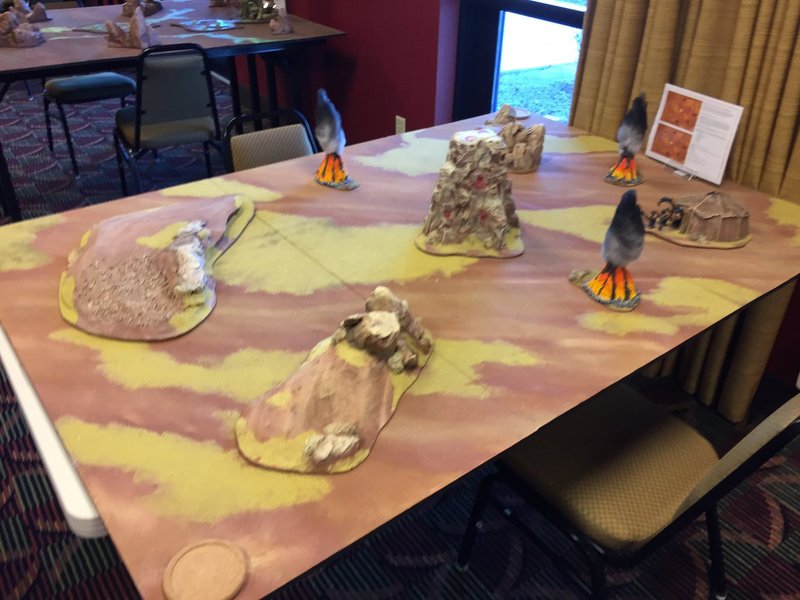 The primary table objective is a fight around a terrain piece with the army causing the most amount of wounds within an ever growing larger radius wins the objective.  The scenario has three fixed Grail tokens in bonfires spread across the field (one in each starter zone and the last in a contested middle area away from the stone.  Those too close to the bonfire similarly suffered unpreventable wounds.

The Arachnarok Spiders lumbering monsters of chitin and dripping fangs are scattered throughout the mortals. Death comes to those foolish to wander too closely. 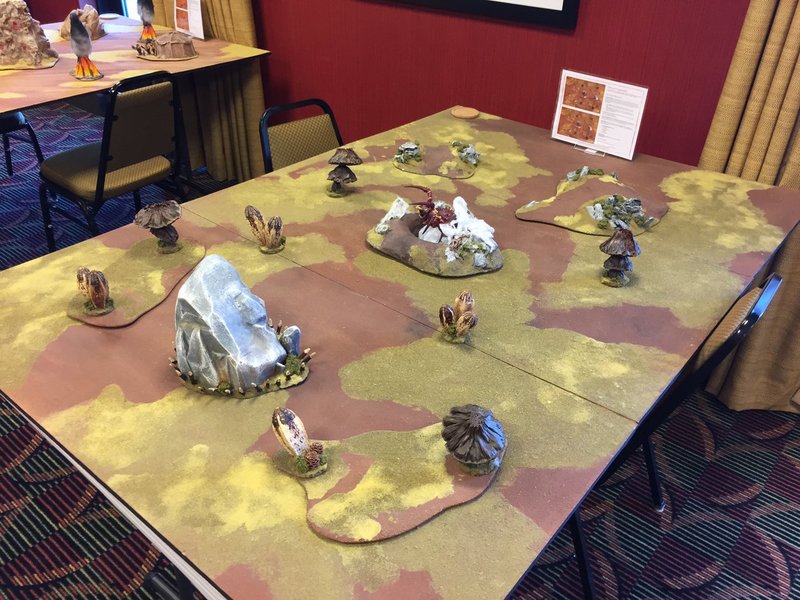 Deployment on this board is staggered with the terrain objective on the far end, outside of both deployments.  The player with the largest number of models within 6” of the Idol of Mork/Gork gains the ability to call upon Gork and Mork, calling down either Gork’s foot or Mork’s gaze upon the enemy.  The player that does the most amount of damage with these prayers wins the table objective.  The Grail Tokens were miscellaneously scattered around the Arachnarok hole, where a sneaky Arachanrok would chew on nearby units camping the tokens.

Table 9 – Lair of the Astromancer

Celestial Order, continues to study the heavens to harness the magical power in the mortal realms. 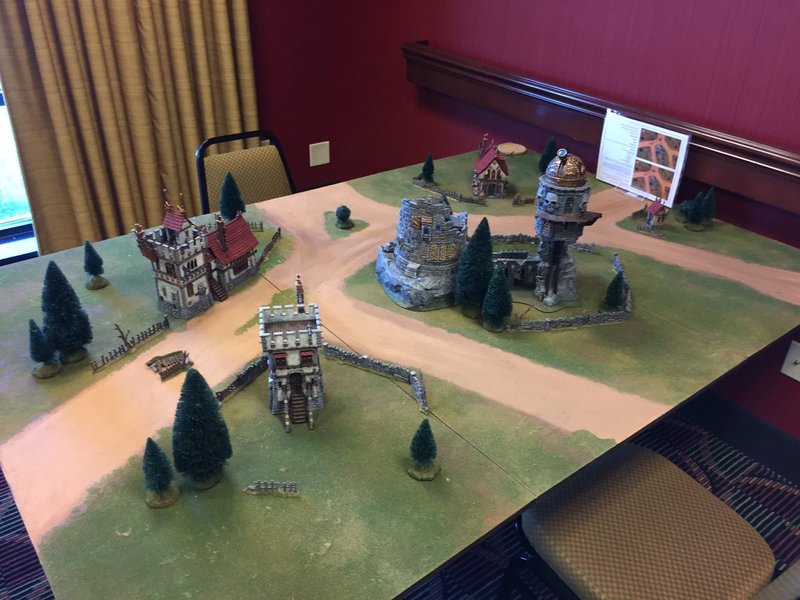 This board offered a unique take and hold scenario that included at least 6 buildings.  One of the buildings was the primary table objective.  All of the other buildings had the possibility of a Grail Token being hidden away in their depths, but this wouldn’t be discovered until after the game ended.  The goal was to take and garrison as many buildings as possible, including the terrain objective.  The roads on this board were muddy and greatly hindered movement as well.

The endless dessert continues to expand across the mortal realms. Heat and sand consume all that stand in it’s path. 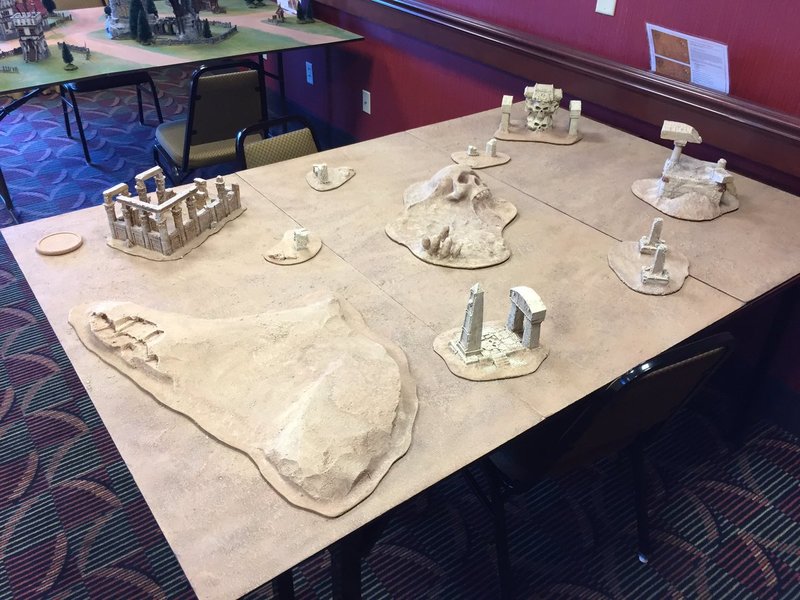 The main objective on this board was a model-feeder scenario where you dumped troops into the swirling sands at the center of the board in pursuit of the hidden city.  When units touched the swirling sand a dice was rolled for each model: on a 6, they were removed from play and arrived at the secret city; on a 1, the model was slain.  Surviving models teleported to a random quadrant of the board to set up again.    This objective coupled with split deployment (each player got 2 opposing 1’ x 1’ squares in each corner) made for very interesting play.  Additionally, at the end of the second turn, the Grail Token would randomly appear in one of the six panels of the board and, if claimed, would lock into place for the rest of the game.  This was a very fun and strategically challenging board to play on.