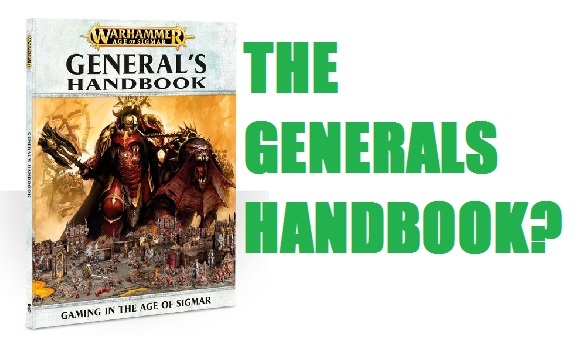 It took a while for Games Workshop to release a general rule book for Age of Sigmar. But when they did we got a whopper of a book.

The big thing when AOS came out was that GW did a brave thing in removing points from the game. The game went from having an massive ruleset that can be difficult for beginners to a 4 page booklet.

It took a couple of months for GW to release this book. And it was as if they released the new game to let us decide how it should be played. Is that brave or dumb?

They had to break the game to remake it and the they developed the Generals Handbook with the help of Dan Heelan and Wayne Kemp from the HeelanHammer podcast, Russ Veal from Facehammer and Ben Curry from the Bad Dice podcast.

The book has 3 ways to play the game Open play

Open play is bring anything you want. bring any amount of units, uneven armies or just arrange something with your appointment. There is rules for more than 2 player games and Triumph and treachery games

Narrative play is your story driven aspect. This has 4 battle plans, themed armies and even has 2 recreated battles. It has multiple ways to run a campaign: Path to glory, map campaign,tree campaign and a matrix campaign

Matched play is your points. It has points for all units for each army and even the recent discontinued armies and units. Is has tournament layouts and pitched battle for matched play games and ladder campaign rule.

The last thing it has in the book is new battle traits, command traits and artifacts for each alliance. This is a great addition and gives you more choice for your army.

Overall this book is a necessity for Age of Sigmar gaming. It gives you multiple ways to pay and explore the game. It encourages you to try different ways of playing and not just straight forward pitched battle. Ony thing that needs to be improved is the path to glory campaign. I was hoping for a more of a skirmish type of build with it but it was more of starting a small army and just add units onto it.

Its a great book and there is supposedly another updated on coming out next year. But it's at cheap affordable price and still worth getting.