Greetings everyone, I have something to share with you all today which is very special to me as I have put a lot of work into this. I present my gaming supplement for Age of Sigmar titled:

Here are some screenshots of what to expect: 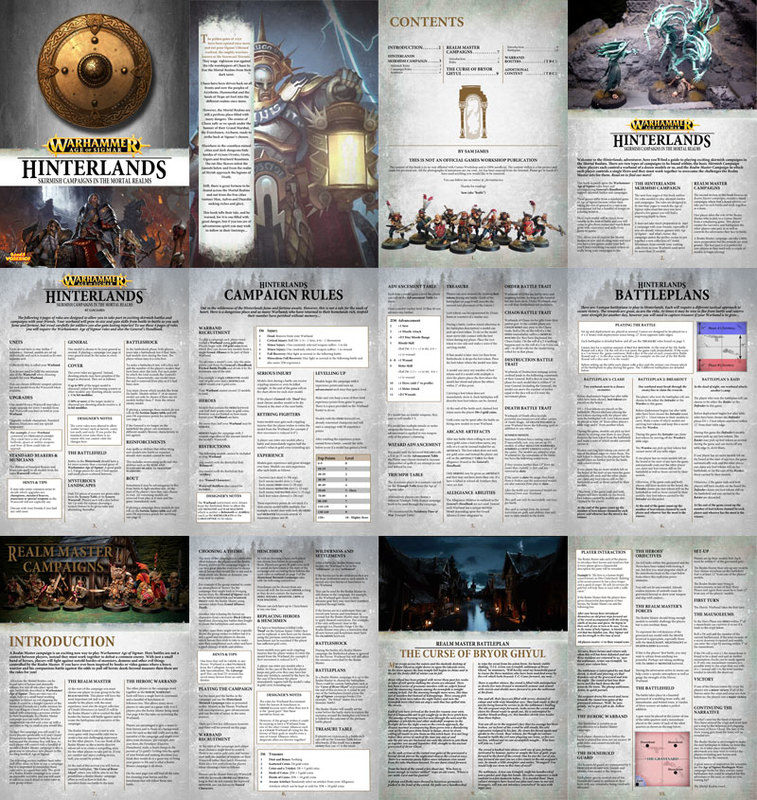 This is a supplement to play narrative skirmish games in Age of Sigmar, and I've tried to make it look like the real deal.

Enclosed you will find not one, but two campaign systems outlined. The first (titled 'The Hinterlands Campaign') is akin to Mordheim or Frostgrave. Players can create a Warband of a dozen models and battle it out for treasure, gaining skills and experience but also running the risk of injury and death on the way.

The rules for the Hinterlands Campaign are 4 pages long. Just like the core rules. This is not meant to be Mordheim transplanted into AoS, but a skirmish system that embraces everything I love about Age of Sigmar. You'll find Battletraits, Artefacts, and Time of War rules all have a place in the system.

On top of that, the book also introduces a second way to play; the Realm Master Campaign.

The Realm Master Campaign is an additional 2 pages of rules (plus a custom battleplan to set your imagination off) and details how to run an RPG set in the Mortal Realms. It is akin to D&D or Warhammer Fantasy Roleplay, but is a simple system set firmly in Age of Sigmar at the same time.

I would love to know your feedback and thoughts on the rules contained. And if you want to use them, please do! This is what they are here for!

I plan to work on this book further by adding in a hobby section with example Warbands and also a Warband Roster to help manage your games. If you have any more ideas please let me know.