Yes, it's finally time for another update! On the 19th of November, Battletome: The End Times update 2 will be released. It contains a number of new features and fixes to the existing battleplans. It was quite a journey to get to the first release, and the reaction was immense! It's been shared in all sorts of media, and mentioned on numerous podcasts. I was even invited to talk about it on an episode of Garagehammer! I took a few months off after completing it to focus on other things, but now I'm back. Though the bulk of this now year-long project is finished, it's not done. Already packed with features, the next update brings even more options to your games.

Biggest of the new features is the Mighty Battles campaign system.

Built on the Lords of Battle system found in the original End Times books, it has been expanded and generalised to make an easy system for building and playing your own campaigns. Many campaign systems rely on many players or weeks (or even months) of playtime. I find that these sort of campaigns usually collapse before they finish, for all sorts of reasons. It's never easy to keep groups together and focused for such long events. I knew that the battles of this tome needed to be connected through a campaign system, but I wasn't sure how to do it. The Lords of Battle system from the original books provided the answer. Designed for two players to duke it out over shorter campaigns, it's perfect to play across a single day or a weekend. You still recreate the epic battles and heroic moments, but now you can reliably complete each campaign. There's also much less fussing about with special campaign rules, unpredictable results or the need for a DM! Now you just follow the charts to battle, all the rules you need to know contained in a short and easy-to-read document.

As with all content in Battletome: The End Times, the campaigns are faction neutral. So even if you collect Stormcasts and your friend has Fyreslayers, this is a way for you to play. You could create your own campaign, or play one of the many that are included, substituting the story as best suits you! For those of you who yearn to fully recreate the wars for the old world, there's also a "Recreating the War" section, forcing further restrictions to keep the battles in line with the story as they happened. This way you can play exactly the way you want.

For the 2.0 update, the Battletome will include a full campaign for each book! These will naturally not cover every battleplan in each book, but rather parts of the story. For some, this will include battleplans that are not in Battletome: End Times. This is simply so that each battle can be unique and interesting, true to the story, and without me having to invent another 50 battleplans!

I can reveal two of the campaigns that will feature; From Nagash, you will get to play through the Rise of Nagash campaign. It follows Mannfred and Arkhans attempt to ressurect their long-dead overlord, facing a variety of foes. The first campaign from Khaine will be The Return, a campaign about Malekith's final assault on Ulthuan, and the desperate race to the Blighted Isle and the Shrine of Khaine.

In addition to the Mighty Battles campaign system and the embedded campaigns, there will be several custom warscrolls!

There are many heroes and villains whose tales need to be told. Some of those featured prominently during the End Times will be recieving all-new, custom Warscrolls. Each of these are designed to capture the essence of the character, and bring it into the Age of Sigmar. These are narrative warscrolls, with strange and new abilities. Add them to your battles for a great story-driven tale.

The final number of custom warscrolls is not finalized. These will continue to see work up until release. I can reveal that each of the Mortarchs will get their own warscroll, as benefits the greatest minions of Nagash.

For a preview of what to expect, here is the warscroll for Dieter Helsnicht! A manticore-riding Necromancer, he has not had rules since 5th edition warhammer! He's a great mix of combat power and magical might, making your other necromancers instantly more dangerous. Please note that every warscroll is WIP, and subject to changes. 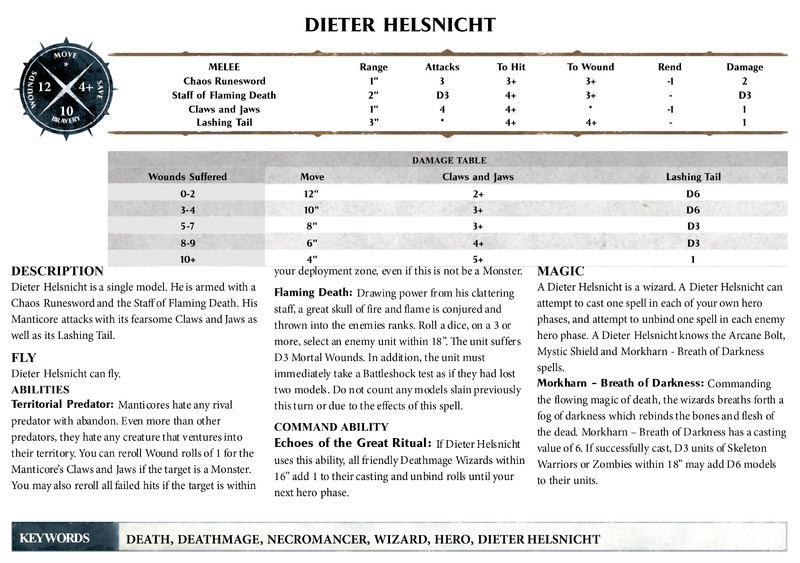 And with that, I've revealed enough for one day. There's plenty more in the 2.0 update, which will drop November 19th.