Phase 2 is running on schedule! The newest addition to the growing horde is the magnificent Warsphinx. Such a lovely model! 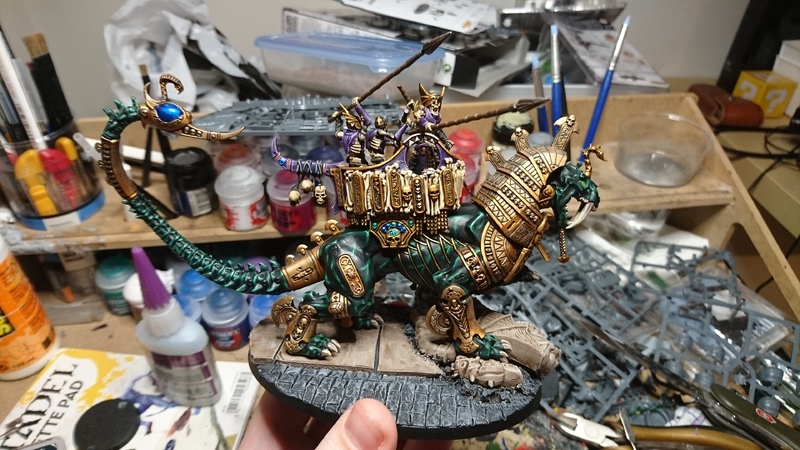 The full thing, in all its glory. I remember the day when the Bone Giant was a large model. Now it's small, almost weedy compared to this. The Tomb Kings continue their triumphant model line with this thing. As a lover of the Tomb Kings, getting my hands on this was a triumph. They were OoP when I bought it, but @Dangermouse425 provided. 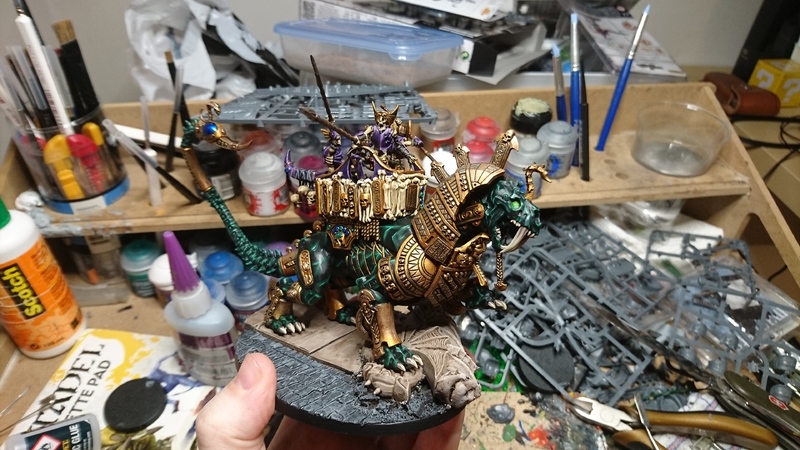 A slightly frontal view. The gold is fairly standard for me. Warplock Bronze base, paint Retributor Armour over everything but the cracks, wash with Seraphim Sepia. To add detail, paint every other "thing" with Ironbreaker. The twist here was a drybrush of Liberator Gold. I'm not usually fond of drybrushing any more, but I couldn't stand the thought of line-highlighting every last edge. I would be done until christmas! So it's a slight cheat, but I feel like it's ok. The result is pretty nice either way. It's old gold, but slightly less weathered than most of the gold in the army. The eyes were painted using @Mengel Miniatures glowing eyes guide. Can't say I have mastered it as well as him, but I'm pleased. There's definitely some otherworldy energy there! Oh, and before I forget. The teeth and claws are probably my best ever. Which isn't saying much. Simple line technique, really. I've just never done it very well before. I figure that means my brush controll is ever so slightly improving. 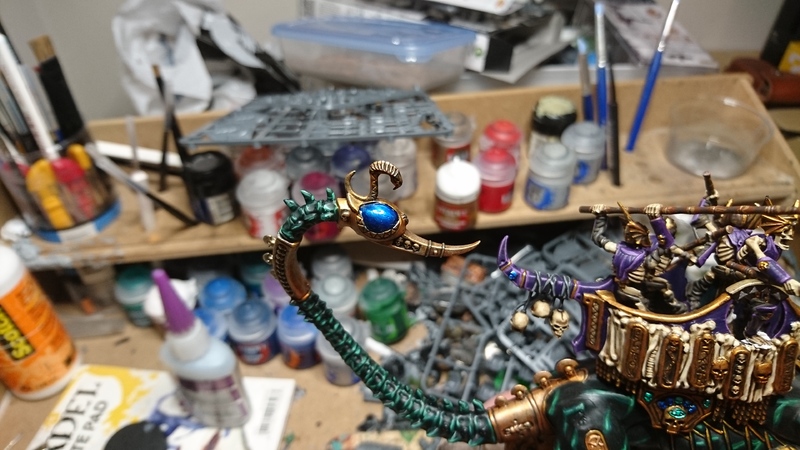 Before we get to the marble, I wanted to do the tail. It's the new Gemstone paint, but with a little work put into it. Base with leadbelcher, then do smaller and smaller circles of the lighter metals, focused towards the front of the orb. Do a thinned wash of Nuln oil to blend the colours a little and shade the edge. Then just cover with the gemstone paint. I needed two layers for a decent cover. It's really simple. I know a more cumbersome method produces better results, but I like it. Went with blue rather than green to provide that little bit of spot colour. 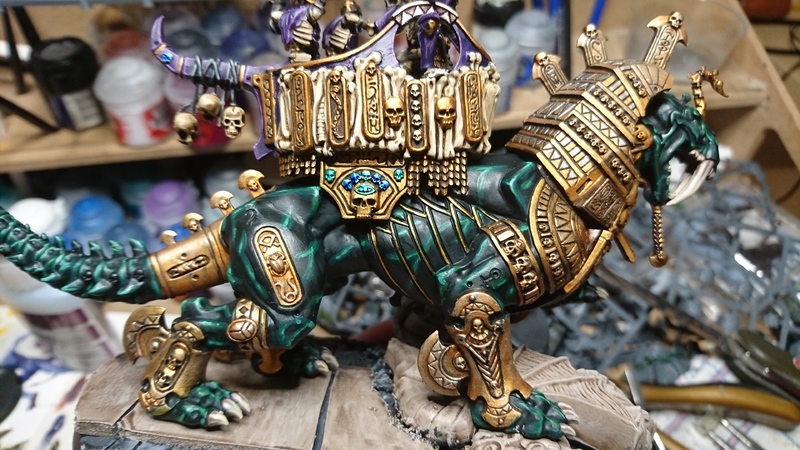 Marble, then. Easily the biggest and most time consuming part of the model. I've used a similar technique for all of my reanimants so far, and it's worked out quite well. Nothing was on the scale of this though. Even the bone giant pales. Again I followed Mengel Miniature's guide, but with my own lazy twist. Start with an entirely Abbadon black model. Pretty important. Then I took Kabalite green and mixed some abbadon into it. Painted long and in lines like you would imagine marble does. Also add to every major edge. Then grab your Warpstone Glow and add some black into it. Paint it thinner within the kabalite lines. The thinner the better on all of these layers, really. But as you can see, I chose the safe option of not going super thin with my first layers. Then you grab the Sybarite green, your thinnest brush, and go to town. Paint it unto every sharp angle (breaks, corners etc), and in thin, irregular lines into the existing lines. They need to be broken up (to simulate depth). Be meticulous! Once that's done, I glazed the entire thing with pure Biel-Tan green.  Overall, I'm super pleased with the effect. It's not winning any awards, but it looks great on the table and OK in close-ups. Nerve-wracking to do so much of it though... 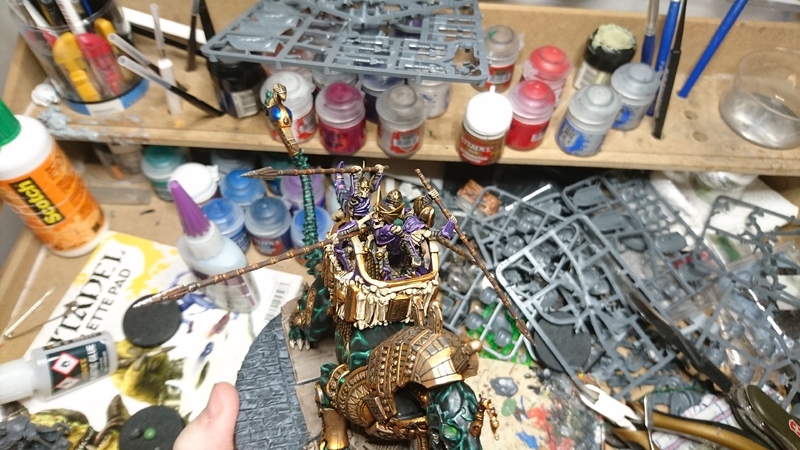 Last up is the crew! They're the OG crew, with breastplates from the regular VC skeletons and heads from the Black Knights. It ties them better to the rest of the army, and gives me more room to paint purple. Othewise this unit wouldn't necessarily fit in as well as the others. They're a right pain to put into the basket, I'll tell you. Decided not to glue them in case I decided to put a King into the howdah. Just blu-tacked in place. Which also allows for much safer transporting. They'd break every chance they got if not.

That's it for this time! Phase 2 of the operation is going ahead smoothly. Just the skeletons and Krell left! Then it'll be a change of pace...