Last weekend was the first big Warhammer Age of Sigmar event at the home of Warhammer! It was also live streamed on Twitch, me and @Ben played in round two, I'm sure he will be along to tell you all how it went ?

I used the Knights of Azyr, a small model army but I have played it a lot and hoped to do well, four wind and a painting nomination put me 5th overall.

Lover the weekend I played ten games and learned so much about my list even after so many practice games. It still hates the mortal wound armies.

Here is my army laid out over the weekend. 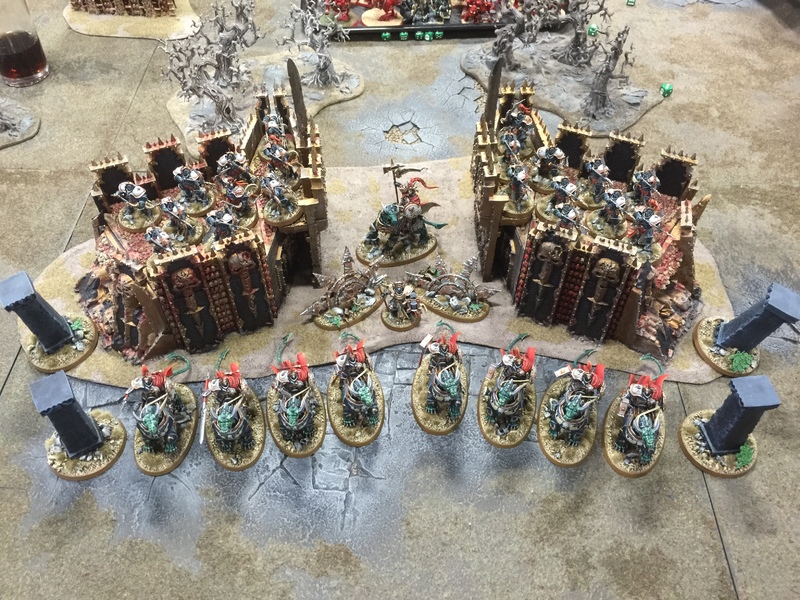 I was also keen to add more to the background of my Stormhost after the event, enjoy.

And so once again it fell to Lord-Celestant Matthias Hammerstrike of the Knights Azyr, one of the first founding Stormhosts first cast into the mortal realms at the beginning of the Age of Sigmar. The responsibilities of leadership were great on Matthias, greater that even he could have imagined. He knew it would be difficult and that many a soul would need to be reforged once it was over. But the Warlords had to be overcome, Sigmar had asked for it to be so.

This was not Matthias first charge into the Mortal Realms, and by now he was a veteran of many a campaign. It was the Knights of Azyr that kept the Celestial Compass from the hands of the Three Eyed King deep in the heart of Gyran, and who had fought alongside the Hammers of Sigmar to drive back Khul and secure the Brimstone Pernintula.

With him strode the hulking frame of Lord-Castellant Roth Lightbourne, a huge man, even for a Stormcast Eternal. Long ago Roth had been the beloved leader of his people until the coming of Chaos, he saved as many as he could but he was just a man. Until Sigmar intervened saving Rathe and guiding him on a new path. Many a time Roth had been sound counsel to Matthias offering sage advice or a strong blade when necessary.

Alongside the Chamber Command fought the Hevavanhost Extremis Chamber with units from both the Lightning and Thunderwave Echelon amongst the ranks. Long range support came in the form of units from Justicar Conclave the Heavenbolt Congress, the air will be filled with the light from hundreds of celestial arrows.

Onwards the Knights of Azry pushed not knowing who their first foe would be...

It was the crazed followers of GorkaMorka that first they faced, the unorganised rabble threw themselves forward into range of the Heavenbolt Congress, one unit at a time they were destroyed but still that came. Chained Mangler Squigs came bounding forward with no thought other that destruction in there mind, awful creatures made worse for the Moonclan fungus brew that are forced to consume, each sip sending them more and more wild and crazy.

They were no match for the Sigmerite plate worn by the Thunderwave Echelon, with barely a scratch they emerged, all that remained of the Squigs were discarded chains and a foul smell in the air. Before the Knights of Azyr could savour the victory a dark cloud was visible of the horizon.

The air grew hot as the Legion approached, a tingle of magic could also be felt seeping through the very ground that the twisted enemy approached on. As the Stormhost formed a battle line, harsh metal creations could be seen approaching, barely containing the daemons bound within.

Then without warning the very ground in front of Matthias erupted with a Bailwind Vortex shimmering with magical energy. Landing atop of the vortex came the leathery wings of Drazaroth the Ashen, his entire bode aflame with a fire that seemed to have a mind of its own.

The Stormcast fought bravely but the fire and the magic were too much even for them, many a soul would hear the ringing of the Anvil of Apotheosis that night.

One defeat cannot stop the army of order not with right on its side and Sigmerite armour on its back.