A review of the results and general awesomeness of the Warhammer: Age of Sigmar event at the Wellington Warlord's Call To Arms convention.

We had 11 entrants and one ringer player, making it one of the biggest events at Call To Arms.

Unfortunately my tournament software failed me on the day, after using it successfully at several previous events. Luckily I had a backup spreadsheet handy, which worked very well. I tend to play at events as well as organise, so luckily this method wasn't too time-intensive.

I'm going to look at the results first, then at how some of the lists performed. I will then go over my thoughts on the battleplans we played. Once I have a bit more time this week I will post a full battle report of my final game against Tomb Kings, which decided the tournament. 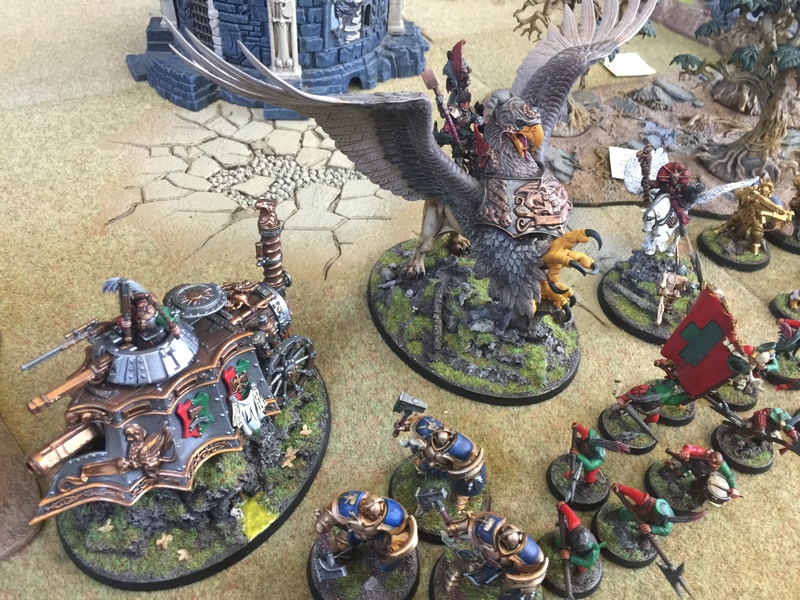 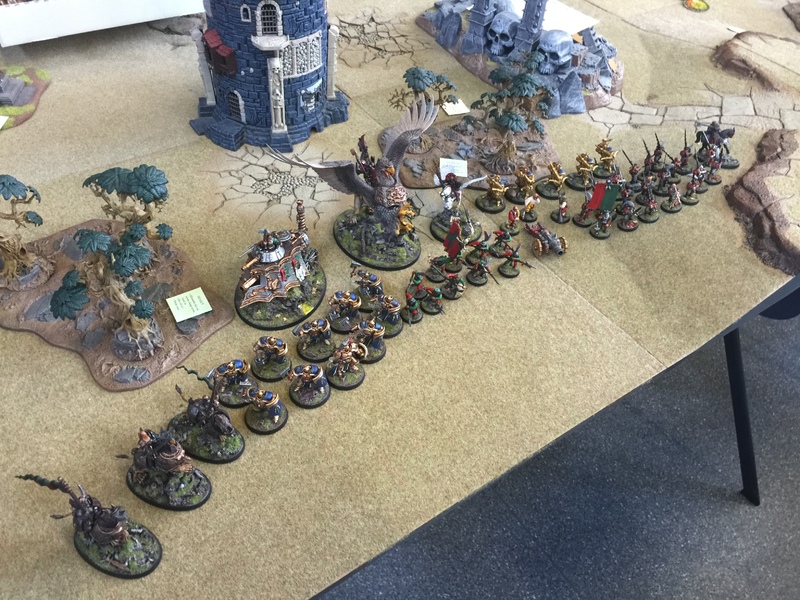 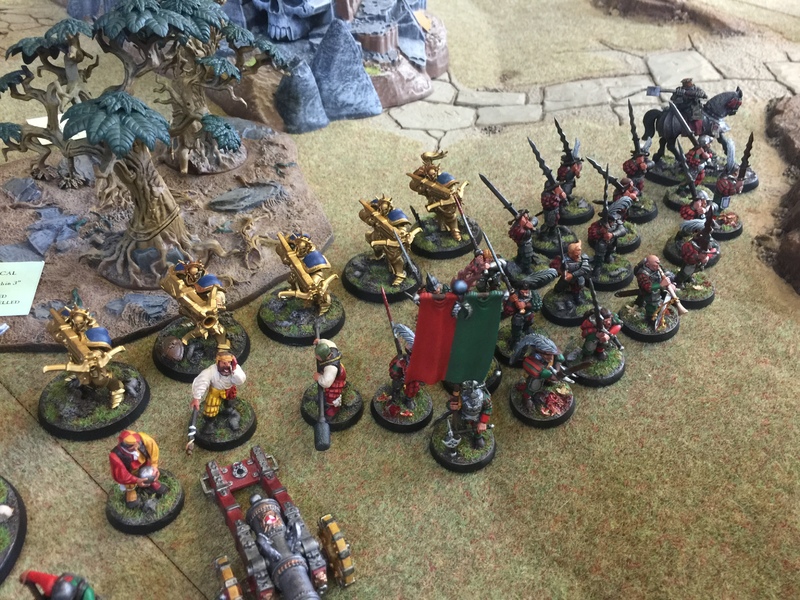 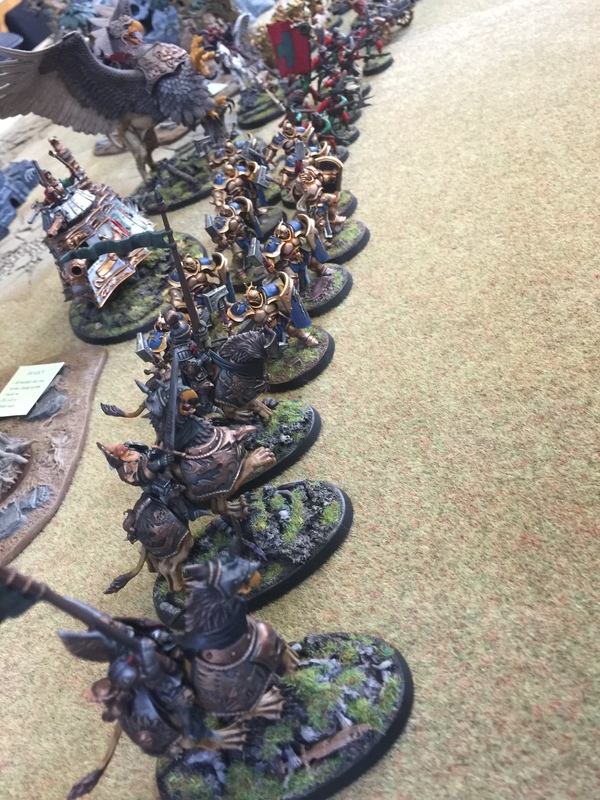 Player army lists can be viewed in a previous post.

This was the winning list. The Necropolis Knights buffed by Settra and the Necrotect was the undoing of most armies, as they flew around the table doing crazy damage. Highly mobile, and highly durable with the unit banner. The Terrorgheists cry combined with the Bravery debuff from the catapults had more modest success, but were responsible for taking down a Treelord Ancient. Jim played the Freeguild, Sylvaneth, and Nagash lists, and had the most problem against the Undead. All up, the mobility served the army well with the objectives, and the 'deathstar' Necro Knights did the damage. Tomb Kings are very much a power army in Age of Sigmar.

Multiple Celestial Hurricana are a great combination, and Shaun's list had a lot of success. Only by missing out on a major objective did he come second - his kill points were not matched at Call To Arms. It's great to see the human troops do well, and suspect great things are in store for the faction going forward. Shaun says the mortal wound output was a key part of his success, and that the General on Griffon performed well with the extra attack and damage. His opponents tended to focus on his chaff units, allowing him to move on to table his opponent in most games. The game where he didn't push for the tabling cost him the event!

This faction was only released on the day of the event, but thanks to the current release policies, the rules were available over a week beforehand. With only nine models, I was a little bit sceptical that the army could perform in battleplans that require quantity of models to capture objectives. In practice however, they did really well. Allegiance abilities allow the army to get across the table very quickly and hit hard, and so were able to neutralise opponents pretty well. I played this list in game two, and only Nagash was able to pull the game back. He would have won it easy had I not had the big guy.

There were two armies that took Moonclan, and both had a mix of infantry and large creatures. The gribblies can be scary; I came up against the Troll Hag and Colossal Squig, which had some great abilities. The problem arose with Bravery and Battleshock. Once the infantry take a few models off, they crumble very quickly. The fanatics had some great rules, and it was great to see Skarsnik hit the table!

I was curious to see how this list performed, because it was almost 100% ranged attacks. With units that can shoot while in combat, it had the potential to be very powerful. It did do quite well, winning two of the three games with Major Victories. Bo never got the chance to play against the top three, so to some extent never got to fully test it. However, he went down against the Sylvaneth army, who were able to get across the table quickly. Once in combat their effectiveness was neutralised. I would like to see this matched against Tomb Kings. I think it would have done well against my army.

This faction is going to be one to watch. Being able to teleport across the board thanks to the Wyldwoods makes them a great alpha strike army, which is going to define the meta-game somewhat. Jim says if it wasn't for the fact that he spread his army a bit too thinly, and failed to focus on the priority targets in his army, Brendan would have won that game.

It was great to be able to get my army down in two deployment drops, meaning I always got the choice of first turn. I probably made the wrong choice once or twice however. It was crucial on one of the games. The Legion of Death troops make excellent objective holders, with a ward save from the allegiance abilities and regenerating models. They are slow, but the battalion rule does help with that. The Wight Lord was very tanky. I found the Ring of Immortality useful - if he died I was able to resurrect him on an objective. But the true hero was Nagash. Simply put, he swings the game. He only came close to death once against the Beastclaw Raiders, but otherwise he serenely drifted around turning things into dust. He worked very well with a solid infantry core. The Grave Guard all got taken out before they could do anything.

I played against Alistair's Moonclan. Taking the first turn allowed me to take the central objectives and score 5 VPs in turn one, which put Alistair on the back foot. He was able to retake them for a while in the middle of the game, but in the final two turns I was able to table him and take the back objective. I think getting that first turn and being able to capture the middle objectives early is a huge advantage, but you have to be able to weather the counter attack.

Gifts From The Heavens

Such a good scenario, one that I almost messed up. On each player's second turn an objective will drop in a random part of the battlefield. My opponent for this was the Beastclaw Raiders, who just focused on smashing me. My troops were quite slow, and I deployed them too far forward, so I got charged in turn one. However, without quick troops it's difficult to react to the objective drops. Requires a diverse list to cope with. Even tabling the opponent is no guarantee of victory if you can't get near the objective. Remember that you score more later in the game too.

This was my favourite. You can move off the objective and still control it, until your enemy comes and claims it. We slightly misinterpreted exactly when you can 'flip' it. We played it that you can only claim it at the end of your own turn, but the rules do say you can also do so at the end of your opponent's turn. We were consistent so it didn't effect the outcome. The most significant thing about this battleplan is that you can only score a major victory if you control all four objectives, which can be quite tough. My army for example is not very mobile, so I could only ever hope for a minor victory against an agile army like Jim's.

I've had some fantastic feedback following the event, with gamers really pumped for more. Jim and I will have a rankings page up soon, so hopefully we can form a solid tournament scene out of the success of events like this. I can only see the game going from strength to strength.

The General's Handbook rules get a big thumbs up from us!

There are players who really want to play at 2,500 point level, while some are happy with the smaller point events. I hope to be able to test all sizes and formats this year to see how we go, so it's great to be able to test the waters.

A massive thanks to Matthew, Luke and especially Nathan for supplying some of the most amazing GW store terrain they've put together over the years. Nathan brought his Legion of Azgorh as the ringer player, won two of his games, and most importantly gave people really fun games.

Here are some of my favourite photos. You can view a full album on my Facebook blog here. 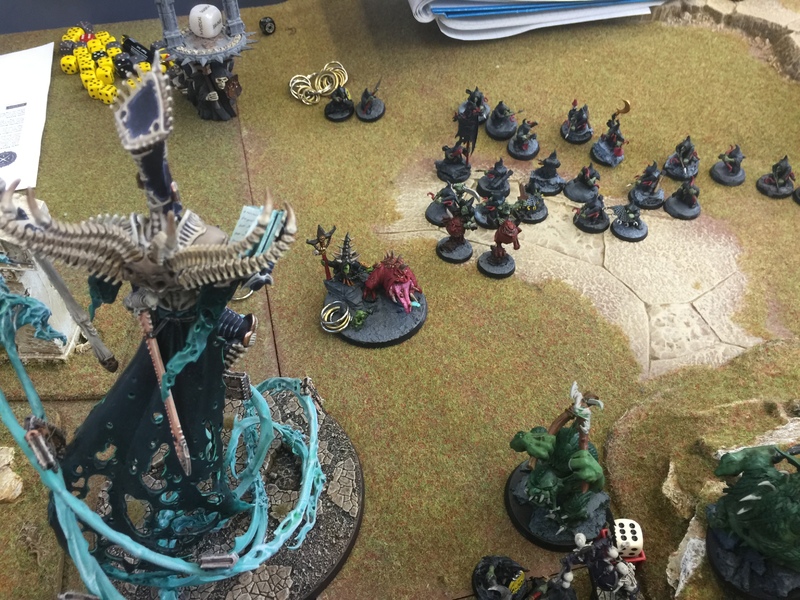 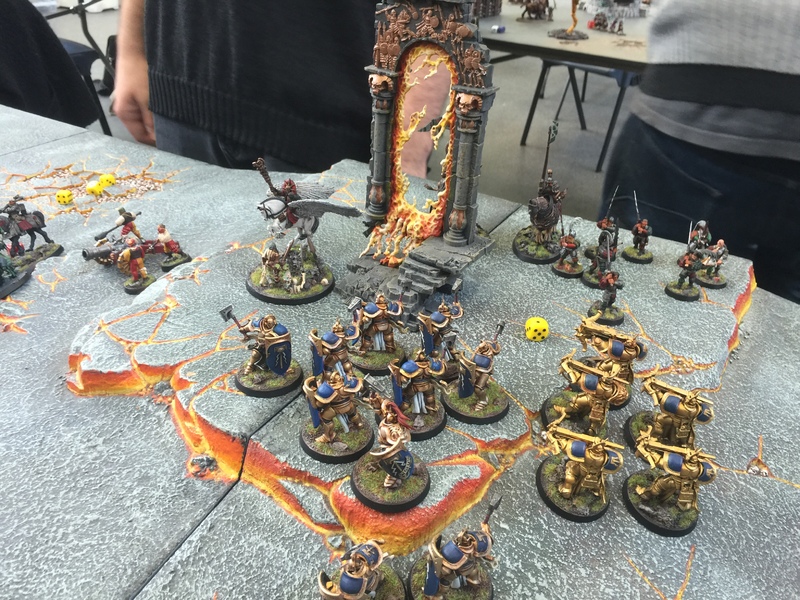 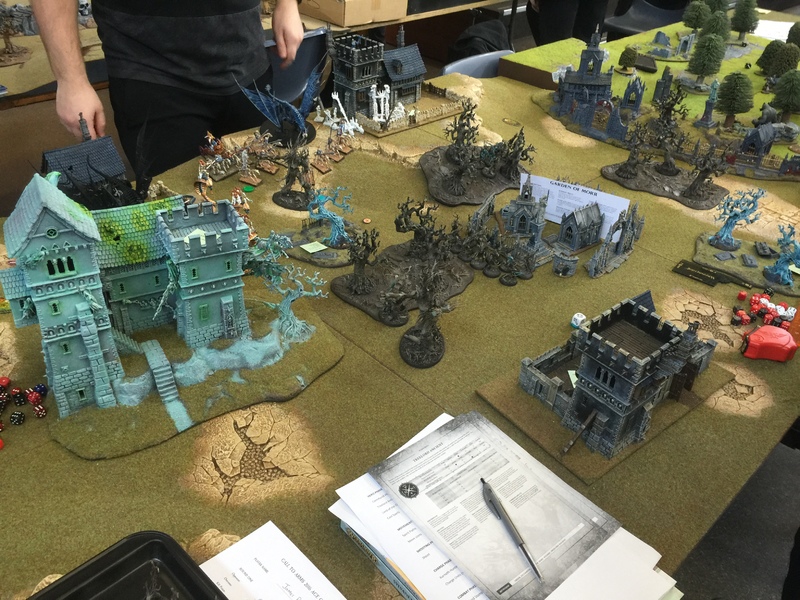 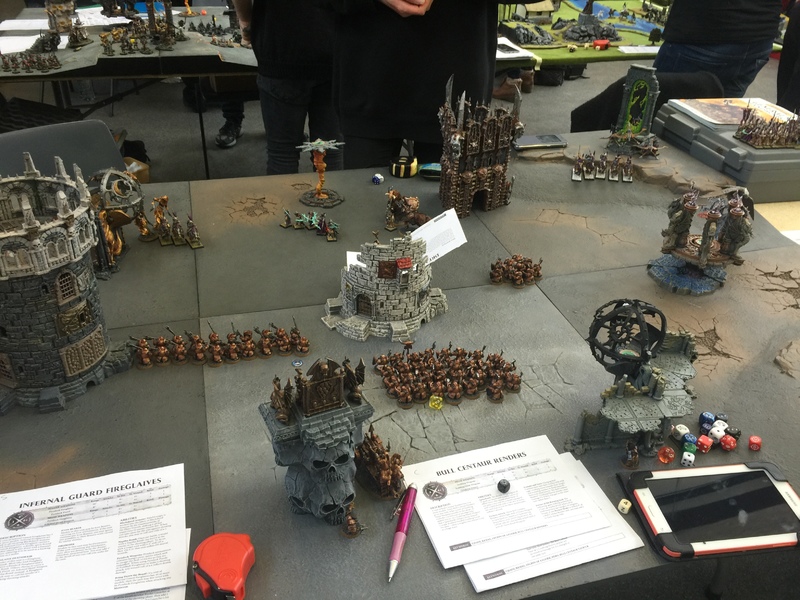