Kronak was still furious over the loss of his chimera.  After recruiting his new lieutenant, Skarlak, he immediately put him to the task of tracking down another chimera to add to his army.  To make up for the power he lost, he was able to recruit more of his Thunderscorn brethren.  During their march, a disgusting sorcerer who obvious followed the god of disease aproached Kronak and asked to join him for the march.  His purpose is unknown, but be brought a manticore, so Kranak allowed it.

Cuchulag had kept following him and camping on the outskirts of his camp.  Kronak had completely lost control of his former champion but if a fight broke out, he was sure Cuchulag would join, for his own glory if nothing else.  His new apparent favor of those cursed choas gods had also brought him followers of his own.  They will be unpredictable, but hopefully helpful in any case.

While on the march, Kronak's scouts easily discover a shining host of elves on the march.  "Skarlak, erect the herdstone and prepare for battle!"

Kronak deployed his strength, the Dragon Ogors, on the left flank opposed to the enemies strong infantry.  His monsters deployed in the middle along with Skarlak and his prepared sacrifices.  Ungor raiders were sent to screen the monsters.  Cuchulag and his followers were nowhere to be found.  "Damn that unreliable beast!" 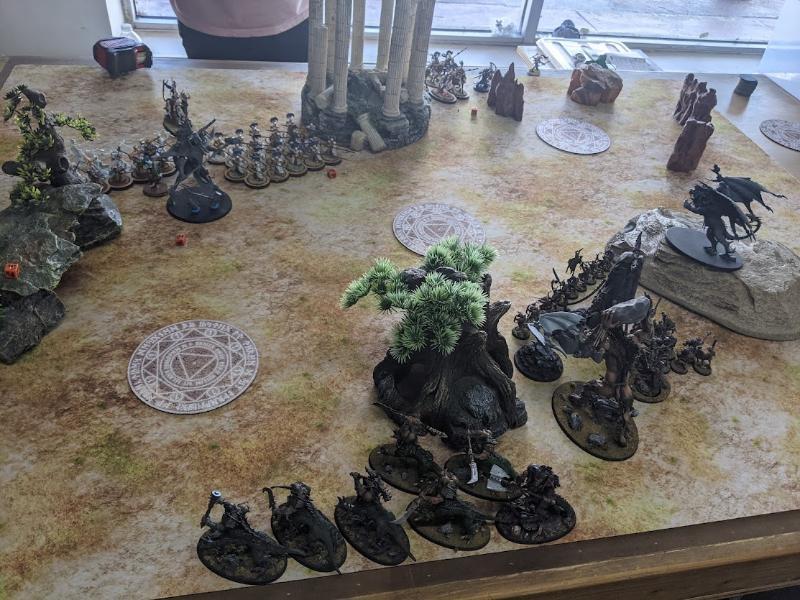 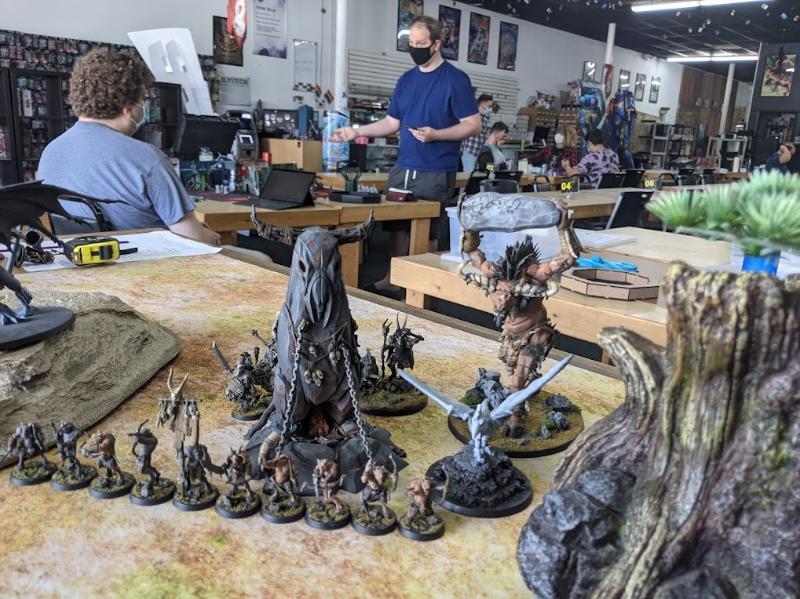 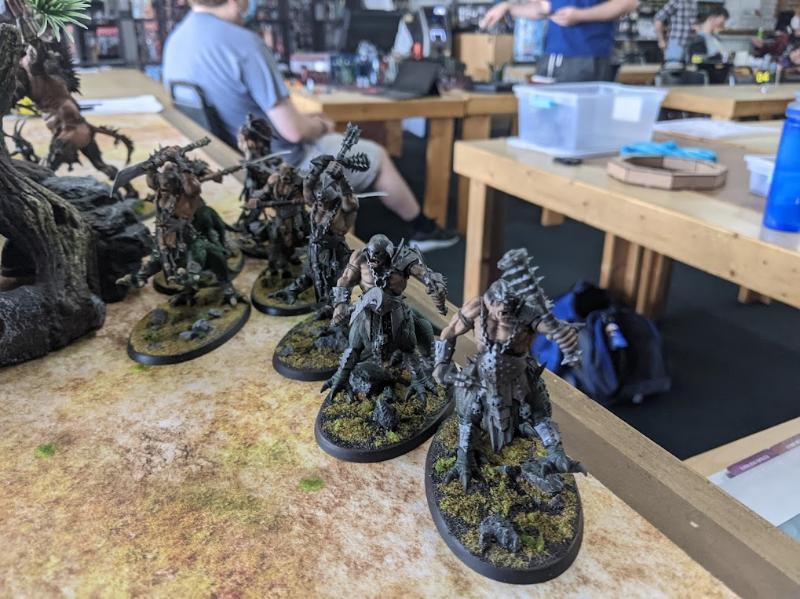 The raiders move up very quickly and get right into the face of the large block of pikemen while Kronak and his thunderscron move up and scream a challange to the elves.  "Come to us beast worshipers! Come face the true lords of the beasts!"  The cygor hurls a huge anti-magic rock at the glowing mass of pike.  It lands right in the middle but they all move out of the way.  Meanwhile, the cockatrice screams at the large bull man, attracting his attention.  Their eyes meet, and the beasts right arm and leg start to quickly petrify. 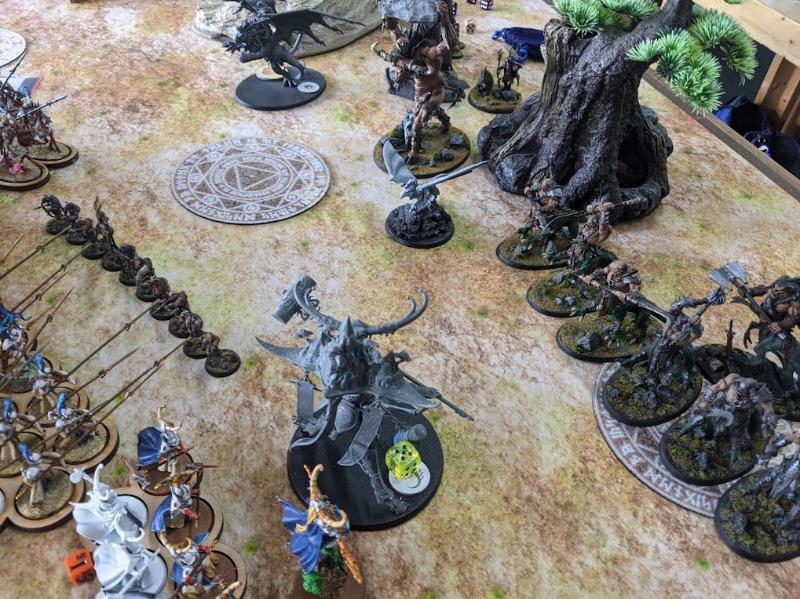 A group of bestigors, followers of Cuchulag, appear behind the elves and charge their general, though they have a hard time fighting him with is brightly glowing armor.  Kronak knows that Cuchulag must be close, "he didn't abandon us yet". 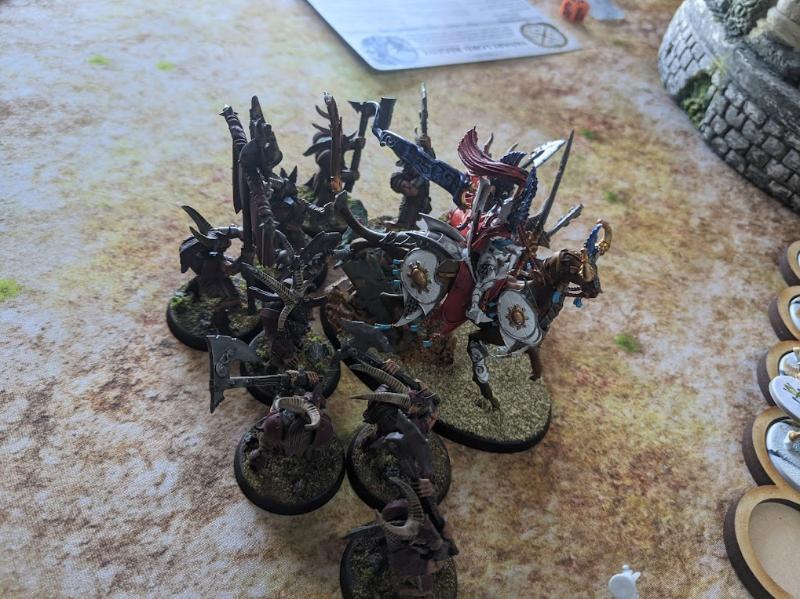 Cuchulag, seeing Kronak's army starting to join the fight, notices a new hero on the left flank of the enemy army, along with what looks like that hero's follower, an archer.  A third fighter appears out of nowhere between Cuchulag and his prey.  Cuchulag laughs and morphs into his fighting state, bulging muscles, one eye larger than the other, him mouth frothing from fury, he prepares to charge the enemy.  Following him is his latest shaman and another charioteer.

The elf cavalry signal and charge into the raiders that are blocking the spearmen.  The raiders are cut down and flee - their job done.  The bull-man charges the cockatrice and is petrified further but manages to bring his huge hammer down and destroys it, though at much cost. 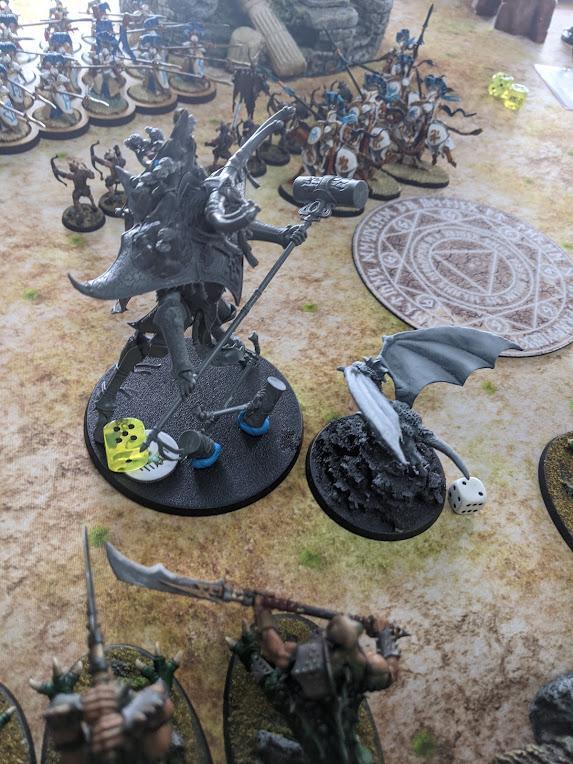 The sorcerer lord charges his huge manticore into the elven cavalry and destroys them all, the manticore roaring.  The cygor throws another large anit-magic stone, this time, when it hits the pikemen, their shining shields briefly lose their shine and many of them are crushed by the stone.  Kronak and and unit of dragon ogors challenged the mountainous beast but found it more difficult to finish off than they thought.  In addition, his great hammer crushes Konak and nearly fells him.  "This is not happening like I forsaw!".  Kronak holds his great loadstone into the air and calls down the lighting.  As it strikes him, re-empowering him, it also hits the great beast and finally destroys it. 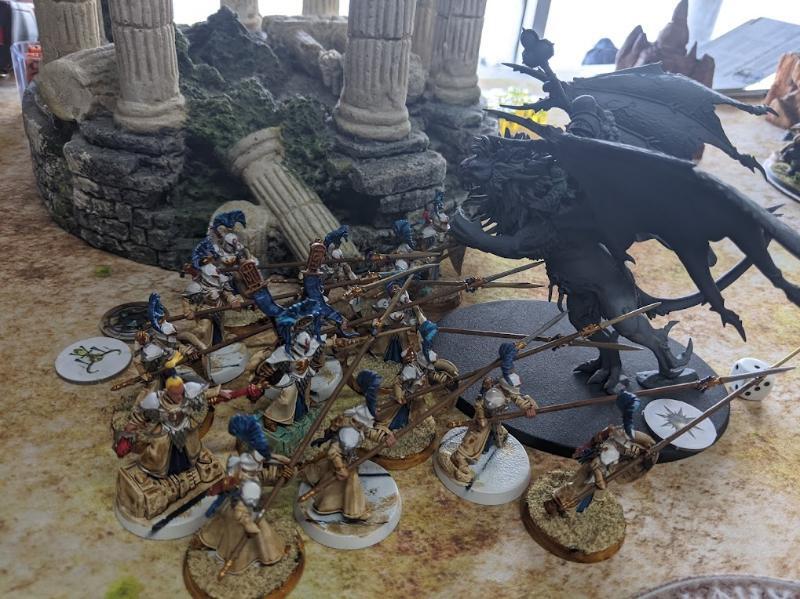 The swordsman facing Cuchulag, whirls their glowing blades impossibly fast and calls to him, "you shall die today by my hand!  Your reign of terror is over!"

Cuchulag feeling the fury of chaos going through his blood, first commands his companion, "you take the puny hero there, let me show this mortal, for I no longer am, the true power of chaos!"  He spurs his chariot at a full run past the lore seeker to his target.  His chariot slams into the hero.  The companion attempts to bring up a magical shield to help, but fails.  Cuchulag cuts the hero down before he can even raise his swords and laughs as the companion attempts to Cuchulag with a bow.  Behind him, unnoticed, his chariot companion is easily dispatched by the other hero that Cuchulang ignored.

A general melee ensues across the battlefield.  The manticore is brought down by the pikemen, the bestigors are finally dispatched by the general and the stoneguard, supported by a stonemage fight the dragon ogors and seem to be getting the best of them.

Unnoticed this whole time, Skarlak performs his duties at the herdstone.  He chants the words of sacrifice and smashes their heads with his mace.  Following that, he holds his staff over the sacrifices and chants a much more sinister sounding mantra, and the dead, stand back up.  Their skulls pieced back together, mostly, ready for him to sacrifice them again.

As Cuchulag mocks the companion of the hero he has just defeated, the loreseker, ignored and underestimated swings his blade finding all of the holes in Cuchulag's armor and nearly killing him.  Startled, Cuchulag turns in fury and raises his axe to destroy the elf that dared challenge him.  Just then, the mocked companion screams in defiance and retribution, and stabs bow under Cuchulag's raised arms and Cuchulag collapses.  His tuskgors, startled and now uncontrolled dart off, dragging Cuchulag's body behind them. 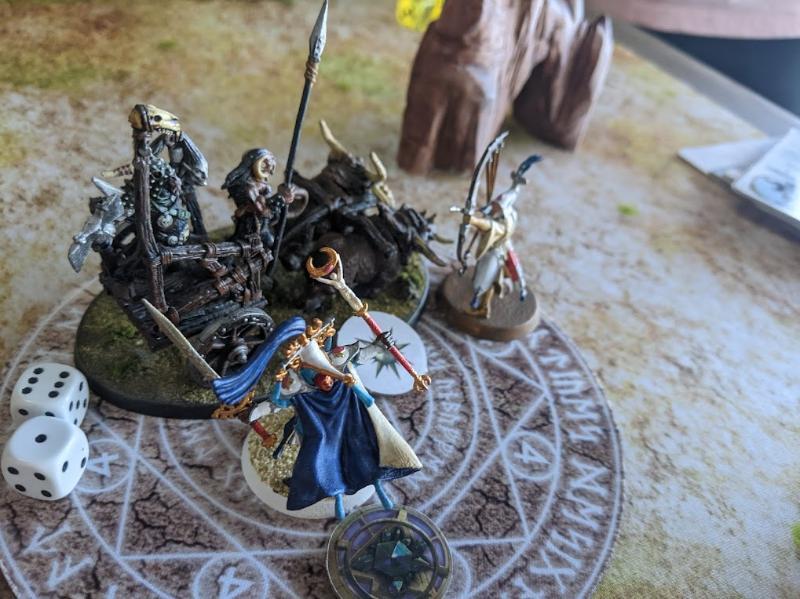 Just as the battle looked like it was turning against the Kronak, Skarlak's sacrifices were answered.  A call of the wild came through, the now well known tri-scream call of a chimera.  It appeared behind the enemy and it's dragon head sent lighting breath into the stonemage.  It then charged, stomping the stonemage to death and attacked the now unsupported stone guard. 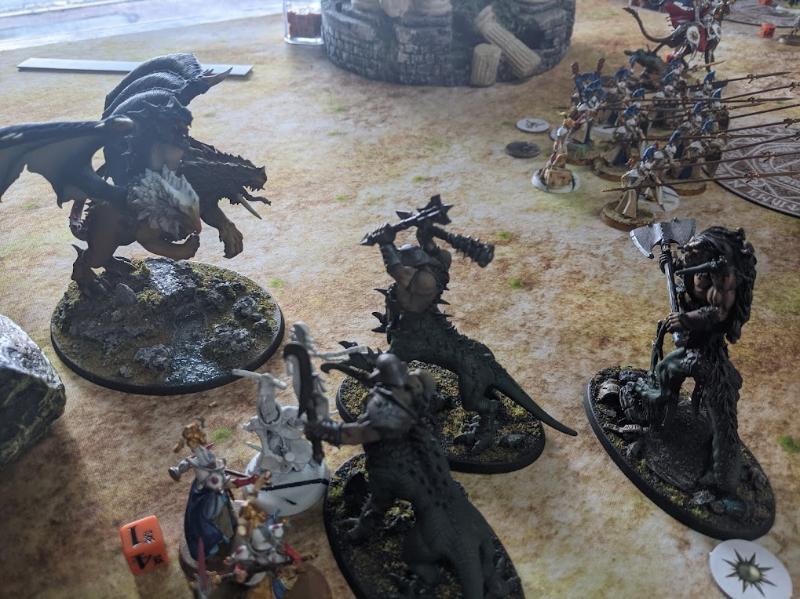 As the dragon ogors finished them off, the enemy general gathered the remaining pikemen, rallying even more to his flag, and charged the cygor and dragon ogors in the center. The elf heroes on the flank moved in and shot the remaining sacrifices from the herdstone.  They were now supported by a new unit of Dawnriders who hunted down Cuchulag's shaman.  Skarlak, with no more sacrifices and wanting to join the battle, sliced himself, giving up some of his own blood and then charged into the melee.  He was quickly cut down for his trouble by the enemy general but shortly after, the elves were run off of the battlefield. 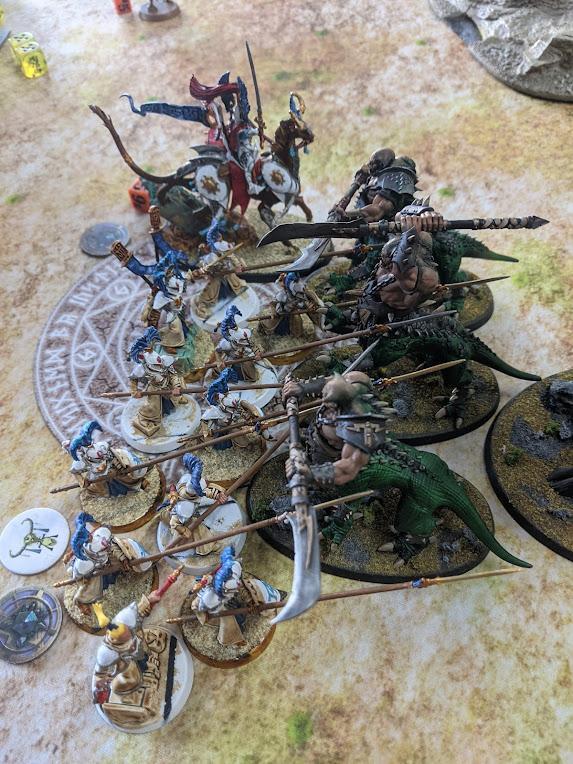 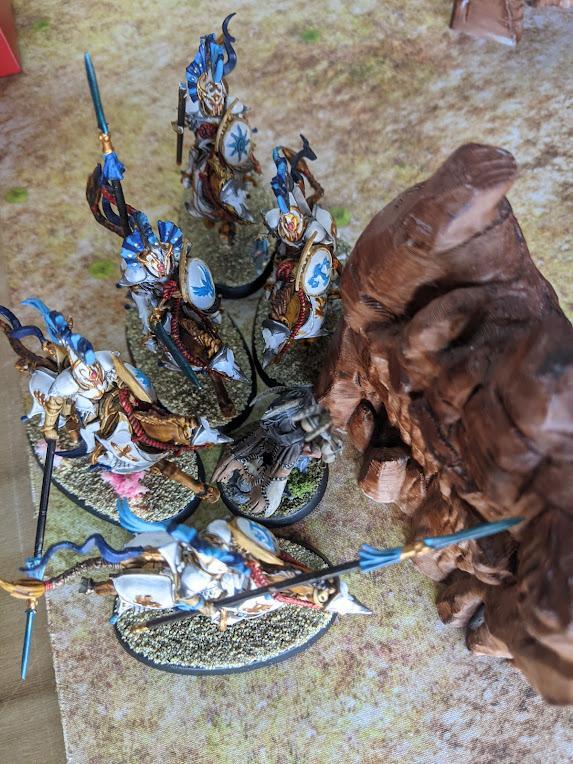 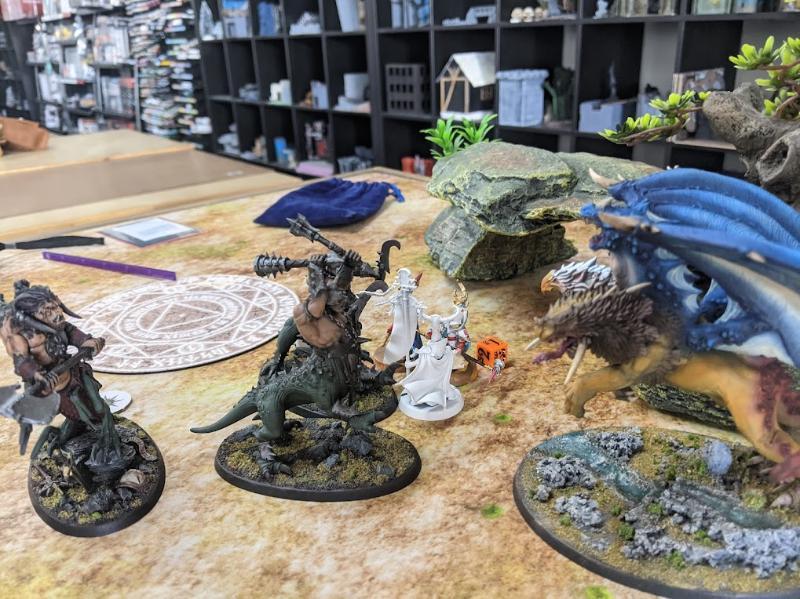 Overall a very fun battle and a BoC victory.  We used a set of custom AoA and environment event cards made for this campaign instead of battle tactics.  They caused some cool but really random things like the Lumineth getting an extra unit at on point, Cuchulag had a special healing power that never worked, etc.  They gave extra damage and VPs depending on what is done.

My rolls for sacrifices were really good which let me get the Chimera on turn 3 I think, which was huge.  Being able to heal the unit that was being sacrified was pretty useful tos, though by the end he was able to shoot them all off.  The Cygor might have been the MVP.  He stopped so many of the little spells by the Lumineth and put damage back on them.  He also hit multiple times with his missile shot and rolled good damage.  Reroll on every unit (his units are wizards) certainly helps.

The Shaggoth with scales and loadstone is so good and survivable.   I might have to drop the Gavespawn in my normal games to keep using it.  Two games in a row, the scales kept him alive and the loadstone not only helped heal him back but fnnished off an important unit.

His AoA character (we are at 35 for one, 20 for another this week) was such a strong melee character.  I'm really lucky that Cuchulag was able to charge and killed him off.  I used my all out attack to help make sure.  I think he had 4 attack, something like 3+/2+ -2 rend, 5 damage.  My opponent basically just put everything into making him a crazy attacker.  Cuchulag had failed to heal twice and so had a couple wounds on him and then failed almost every save to get down to one wound.  I probably made a mistake and attacked next with the DOs because I was worried about them surviving the stoneguard and all he had left was that archer with terrible attacks (improvised weapon) but he got one wound through killing him.  In fact, though it was a victory, both of my AoA characters ended up dead.  I charged Skarak in because I wanted to see how he did but was killed before I had a chance. 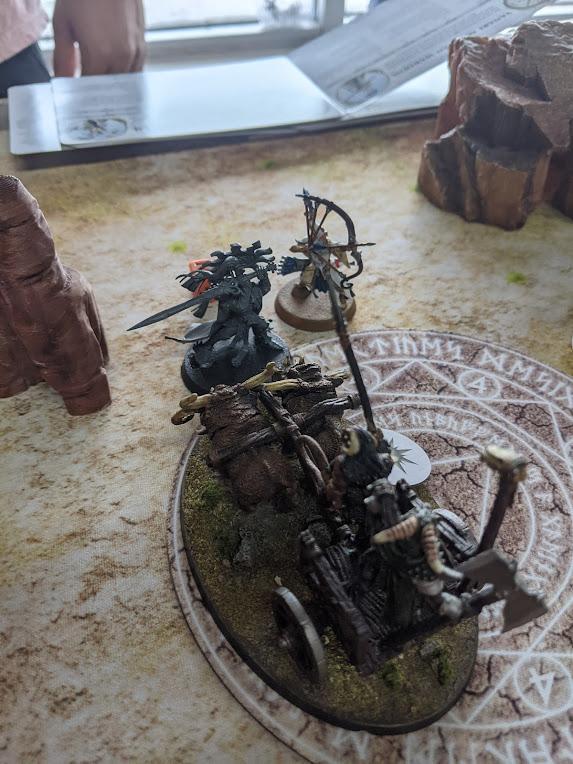